I took the bikes out this weekend and convinced my 10 year old that he could have a fantabulous time forgoing hours of rebuilding his Star Wars Lego sets to explore a brand-new section of the Virginia Blue Ridge Railway Trail.

The Blue Ridge Railway Trail is a 7-mile gravel surface recreational trail used for biking, hiking and horseback riding which utilizes former railroad right-of-way abandoned by the Virginia Blue Ridge Railway, which operated a railway spur that ran to a quarry in Piney River from 1915 to 1981. It is located about 45 minutes south of Charlottesville, with the main trailhead on Rt. 151 near the Nelson County/Amherst County line.

The Blue Ridge Railway Trail has opened in segments. A 2 mile section was completed between the settlements of Piney River and Rose Mill in September 2003. The trail was extended 2.5 miles to the Naked Creek Bridge in 2009 and the final 2.5 miles to Tye River Depot will officially open in Spring 2010. Although the trail is not currently open past Naked Creek according to any website I could find, my barber told me that he had taken the trail over the Tye River and east under the U.S. 29 bridge over the Tye River. This was considerably further than the trail end we found on Fathers Day when I convinced my family to last ride there.

So Will and I headed down there, mounted our bikes, and checked out the previous end of the trail. We still found a sign that said the trail ended, but the gate was open and behind that was a straight line of new limestone bedding. And we found that the completed portion of the trail now crosses the Tye River and runs east along the north side of the river under the U.S. 29 bridge. 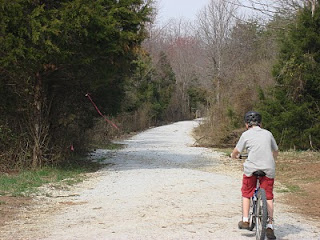 Parts of the trail were pretty washed out, and there was evidence along the Tye River that water levels had recently been much, much higher. I believe this was a couple of weeks ago when the James River was reported locally at nearly flood stage.

Along the north side of the Tye River, there were a number of cliffs along the edge of the trail, possibly indicating blasting when the railroad was originally laid. The trail ended abruptly a little east of U.S. 29, and Google Earth appears to show that the original line merged with the Southern Railway tracks. It will be interesting to see how the trail eventually ends and whether the path is ever extended west into the mountains.

Will and I placed a Geocache on the new portion of the trail. There were plenty of opportunities for such placements so we took advantage and placed our cache at the most interesting spot along the trail. 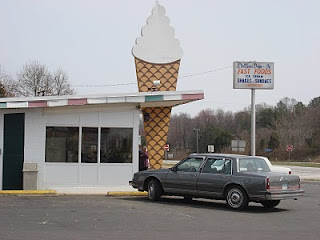 After we loaded the bikes back on the back of the car, we headed to the Colleen Drive-In (pronounced cu-leen) with the giant soft serve cone on U.S. 29 to cool off. It made the trip worthwhile to one 10 year old.