For something different, I drove out to Churchville early to meet up with the PATC's Southern Shenandoah Section for a hike on a trail scheduled to be part of the Great Eastern Trail, currently under development. By the time I met up with the group at Tastee-Freez, they had changed the hike route because of high water fears along the trail. Instead, we started at the Confederate Breastworks historic site on U.S. 250 at the top of Shenandoah Mountain, and headed south on the Shenandoah Mountain Trail.

We reached our turnoff for the Georgia Camp Trail at 10:30, having traveled 1.3 miles.  The group regrouped here, having spread out widely in this short section of trail.  The Shenandoah Mountain Trail continues south for about 25 additional miles, and becomes a real trail (not just a roadbed) about another mile and a half south of this point.  I took the trail portion a few months later.


The Georgia Camp Trail is relatively new to the GWNF.  My official maps from the early 1990's do not have it listed.  Apparently, it is one of a series of trails climbing Shenandoah Mountain developed for equestrian use.  Most of the trail is on old roadbed, and is visible on topographic maps covering the trail.  The trail is named after Georgia Camp Hollow, which was logically likely a camping spot during the Civil War.

We made it down to the Trailhead on U.S. 250 at about 1:30, about 3.5 hours after we started.  Because we set up a car shuttle, this was one of the easier hikes I have taken in a while - mostly downhill! 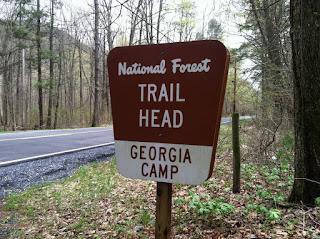 If Shenandoah National Park had data on the relative popularity of every trail in each of its three districts, I bet the Onemile Run Trail would be one of the least hiked trails in the Southern District.  There are probably other trails that see fewer hikers, such as the Lewis Peak Trail, but unlike Lewis, the Onemile Run Trail starts at the Skyline Drive.
I hiked the Onemile Run Trail with my friend Marit and the dog on a warm, muggy July morning.  Projected high temperature in Charlottesville was 98 degrees.  Both of us had to work that afternoon.  Later in the week was projected to be much cooler, but you can't always choose the day you can hike.

We got to the Twomile overlook on the Skyline Drive and headed off on the trail by 8:10 AM.  There was a wonderful breeze blowing on the Drive, but we knew it would end quickly!  It was a short walk along the drive to the trailhead, then a steep drop.  We started at 2812 feet and dropped to 1800 feet over just over a mile.  First, the trail drops along a ridge, then it cuts sharply left at a point where topo maps show another trail continuing straight to the top of Twomile ridge.  None of the trail maps show this, however.  After the steep drop, we kept dropping more gradually, as we dropped off a ridge to the Onemile Run stream at 1.3 miles.  This point is very visible on the elevation profile.

Reaching Onemile Run means that the stream crossings start.  One account of this hike I read stated that there are twelve crossings each way, but I didn't keep count.  From my perspective, the stream crossings ere great - they gave the dog an opportunity to keep hydrated.  We made sure to stop at each crossing to see if the dog would drink from the stream.

At about the 3 mile mark, the trail strays away from Onemile Run and heads toward the SNP boundary.  We only hiked as far as the boundary, even though the trail looks like it keeps going.  Unfortunately, the PATC map and the ATC Shenandoah Guide both discourage proceeding, even though I've read accounts online of hikers continuing to Twomile Run, then hiking back into the park on the Twomile Run stream bed.  After reaching the boundary, we turned around and retraced our steps.

Because we were down in the valley for the entire hike, there weren't any views to speak of.  Neither were there any waterfalls along the trail.  For this reason, I'd rate this hike below most others in the southern district of the park.  It is a great workout, though, especially since all of the climbing is at the end of the hike.

Thursday, June 30th looked like the best weather day for some time to come, so the dog and I dropped my son off for camp at 7:45 then headed out for Sherando Lake, south of Waynesboro and west of Wintergreen Ski Resort.  Sherando is probably the most popular place in the entire George Washington National Forest, with a beautiful campground, popular beach and steep hiking trails.  It always amazes me when people from Central Virginia tell me they have never visited this gem of a place.

There are several hikes in the Sherando area I have done numerous times.  I had hiked much of the Torry Ridge Trail as part of loops I have taken dating back almost 20 years.  There was one hike I had never taken. The Mills Creek Trail goes up the valley on the other side of Torry Ridge from Sherando.  It is a 7 mile trail that doesn't begin or end at a trailhead, so it requires a long hike to complete.  In the past, 15.3 miles just seemed a little too long to take, but since I had done 20+ earlier in the week, I figured I was in shape for this hike.


To get to the Mills Creek Trail, I had to take the Blue Loop Trail up Torry Ridge from the Sherando Campground.  This is a steep climb, as the trail ascends at a 20% grade for the first mile, climbing from 1866 feet to 2733 feet over exactly a mile.  From there, there is another ascent then it is a long and gradual descent over rocky terrain, past the intersection of the Torry Ridge Trail and Mills Creek Trail at 4 miles, to a stream crossing at 5.6 miles. At this point, the trail heads back up a valley in the opposite direction I took descending on the Torry Ridge Trail.


It is interesting to think that the Mills Creek valley is probably very similar to what the Sherando Lake area once looked like, before the WPA dammed up the stream to form Sherando.  The trail showed areas where there had been mining years ago and was a pleasant forest walk, but didn't have much to make me anxious to return.  Although several guidebooks mentioned nice campsites along the trail, I did not see any that looked too inviting.  The elevation gain was very gradual until I hit the 9.8 mile mark.  At this point, the trail ascended via switchbacks at at 17% grade, going from 2462 feet to 3406 feet in elevation over just over a mile.  At the end of the climb, I am in a campsite on the edge of St. Mary's Wilderness, on a road I hiked last year with friends.

I hiked FR 162 for only about 3/10ths of a mile, but it was far enough to confirm that this road is not for my Subaru.  It is open to the public, but advised for high clearance vehicles only.  For good reason.

We left the main road onto a side road to get back to the other end of the Torry Ridge Trail.  None of these areas are marked with signs - a guidebook was essential.  In fact, I had enjoyed the view from the campsite at the end of the Mills Creek Trail last November, without knowing that I was within 20 feet of the trail.  Where the side road intersected with the Mills Creek Trail was the high elevation point of our hike - 3563 feet.

We hiked 2.9 miles on the Torry Ridge Trail until we reached the trail back down to Sherando.  At this point, I again attached the dog to a leash, and we returned to the campground where the dog could get a big bowl of water.  We then hopped in the car, drove back to Charlottesville, and arrived back in town just as my son's camp bus was pulling in.  Did we cut it too close?  It would seem we measured it out perfectly!