Here is another set of photos from an A.T. hike I took back in the Spring with the Roanoke Appalachian Trail Club in Craig County.  This section of trail passes by the Audie Murphy Memorial, close to where the pilot crashed into the mountain back in 1971.  A good read on the monument and the trail is found here: Link. The hike started on Virginia Route 621, where there is parking for about 12 cars.  It ended also on Rt. 621, where it meets Rt. 620.  We parked here because of a stream crossing on 620 - the trail leader did not trust the privately owned bridge over the stream to hold a car!  The hike was 9.3 miles long, was hiked in just under 3 hours 50 minutes, plus about a half hour stopped.  Minimum elevation: 1488 feet.  Maximum elevation: 3120 feet.

The hike, heading northbound on the A.T. starts by traversing the Brush Mountain East Wilderness, a new (2009) wilderness on the north side of Brush Mountain. This section's highlight landmark is the 300 year old Keffer Oak, shown below in the 2nd photo.  Some say it is the largest oak on the entire A.T.  Others say one in New York is larger.  Still others say they are each about equal. I accompanied my Boy Scout Troop on its annual 20 mile hike around Charlottesville this past weekend.  (I say "my troop" because I was recently named Scoutmaster.)  We had 6 boys complete the entire 20 miles, and one boy join after 7 miles, a second join after 8.5 miles and a third join after 10 miles.

The troop did a similar Rivanna loop almost exactly a year earlier, described here: Link.  This year we did it counter-clockwise, while in 2012 we did it clockwise. 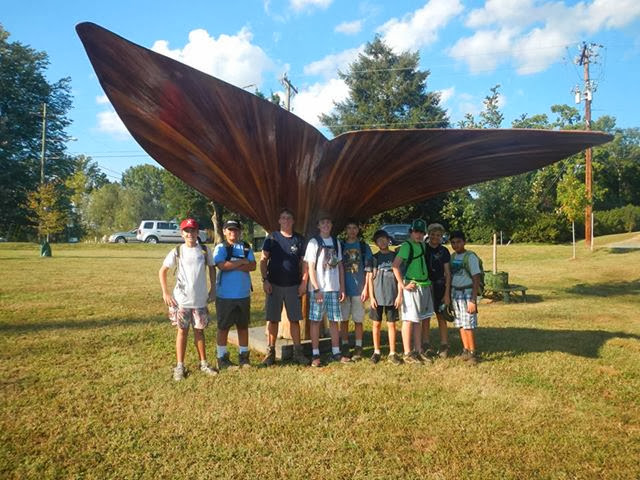 Why do the Rivanna Trail?  It really isn't very interesting compared with a lot of trails within an hour of Charlottesville.  But there are several reasons.  Number one: it is open!  Shenandoah National Park is currently closed.  But more important, it is pretty flat, which is good when boys need to get 20 miles for their Hiking Merit Badge.  And the badge requirements don't differentiate between flat land and mountainous trail when it says "20 miles."  Another great thing is that is near where all the scouts live, and the group is always accessible by cell phone.  So we had the option of getting a hurt hiker picked up (which didn't happen this year), adding boys along the way who had sports or work commitments that morning, and setting up refreshment stations along the way. (Thank you Ms. Troyer!)

This year, we even had a couple of mock first aid incidents along the way, set up by one of the parents who is a nurse.  (Thank you Ms. Vincel!)

I still remember my 20 miles as a boy, fulfilling my Hiking Merit Badge requirement.  It was on the Blackhawk Trail, along the Rock River in Illinois.  There were two high points - at the Blackhawk statue overlooking the Rock River, and at another spot called "Whirlpool Rock."  I am glad to see the trail still exists.  I hope one of these boys has similar feelings about the Rivanna hike when he is an adult.

I don't recall seeing another hiker (other than folks walking and biking the Riverside Trail portion), but we did see three mountain bikers.  There was a tent just off the trail near the 5th Street Holiday Inn (homeless perhaps?)

Our route was slightly different than last year, as can be seen by the map below.  2012 is in purple, and 2013 is in blue.  On the south end, we took trails around the Willoughby subdivision - public, but not actually part of the Rivanna Trails system (thanks to a parent familiar with these trails).  I had never done this part of the hike before, so it was my favorite.

Also unlike in 2012, we didn't follow the trail to its dead end north near Greenbrier Elementary School because we knew we would get close to 20 miles without adding that street/trail combination.  And we didn't take the trail between Emmet Street and Barracks Road because we couldn't cross Emmet safely - UVA football traffic was heading back north, and the crosswalk signal was not working. 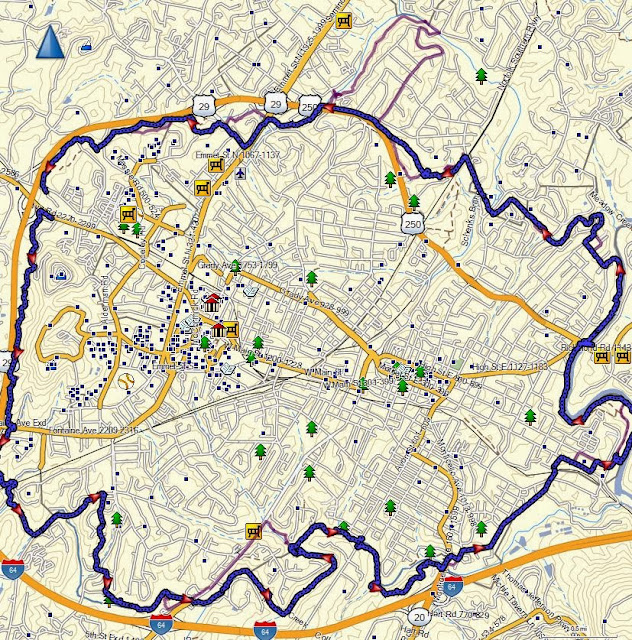 Overall, however, the trips compare remarkably well.  Comparing numbers from each year:

It is interesting to see that moving and stopped times are virtually identical.  We moved faster in 2012, which accounts for the additional half mile hiked in 2012 over the same time length.  There is a Scout saying that "you only travel as fast as your slowest hiker."  Our hikers were generally the same as in 2012, so I expected a slightly faster pace.  One of the other leaders claims we had a faster pace setter for the last part of the 2012 hike, which would explain our slower pace this year.

The ugliest part of the hike is the street walk at about 4:00 on the clockface above.  Today, the local news reports police are investigating a possible Meth Lab on a street we walked on Saturday.  I am glad they weren't investigating that on Saturday when we were walking by!
Posted by Jeff M at 12:17 PM No comments: