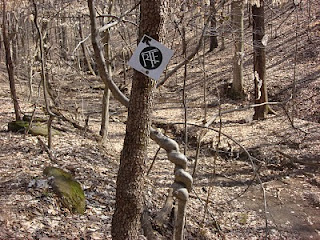 A 10 year old's birthday party up in the Dunlora neighborhood off of Rio Road freed up an hour to check out a new section of the Rivanna Trail in Albemarle County. The Rivanna Trail originally was a greenbelt trail that encircled the City of Charlottesville. It has now branched northward and this portion of the trail was laid out only a couple of months ago, in January 2010.

There was no one else on the trail, though I did see evidence of wildlife. Using my newly-obtained knowledge of scatology, I determined that a fox had left his calling card on a trail step.

Although this section of trail still needs some cleanup, it is a nice benefit for these residents to have a trail that drops down from between their houses and into the woods. And though it didn't always exhibit the beauty of a mountain trail, there was much solitude on the trail. I felt like I was much further from civilization than I really was. And I had time to find two of the three geocaches placed back there.