My nephew Ned was in town, so I rented a PATC cabin I'd never done before.  Larry had been to the Jones Mountain Cabin with his son's scout troop and amazingly wanted to do the trip again.  I had done the hike to nearby Bearchurch Rock back in the 1990's with Cullen and Suzie - I remember being amazed that Cullen could make a cell call from the trail back then!

This overnight occurred on a Thursday and the Skyline Drive was closed due to snow, so we figured we wouldn't see anyone else once we entered an empty parking lot.  We parked just up the road from Graves Mill at the end of the Graves Mill Trail. 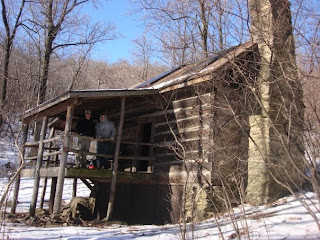 We had read descriptions in other blogs claiming that this was a killer hike, but they must have been written by D.C. flatlanders. It was a nice workout getting up there, but by no means the toughest hike I had taken in 2009.  The Graves Mill Trail followed the Rapidan River upstream to the Staunton River Trail.  We took the Staunton River Trail until we reached the Jones Mountain Trail to the cabin.

The cabin itself was a disappointment. It was actually unlocked! Most of the wood left by the previous group was soggy. Since we weren't supposed to take occupancy until 3PM, we were fortunate that the cabin hadn't been rented the night before.  Otherwise we would have been in real trouble, arriving 90 minutes before sundown.

We never did figure out how to regulate the woodstove so it wouldn't be burning full bore. As a result, it burned out by midnight and I woke up in the morning next to a frozen Nalgene bottle.

The next morning we were up early, collected and cut a lot of wood, then headed back down the mountain.  The trip back was slightly different, as we took the McDaniel Hollow Trail back to the Staunton River Trail, instead of the Jones Mountain cutoff.