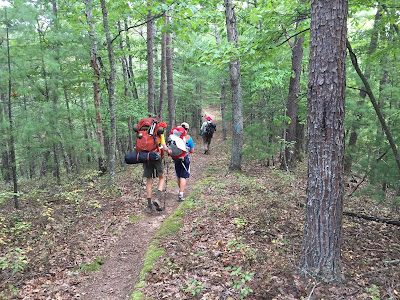 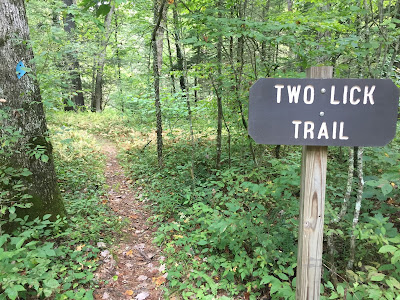 The Two Lick Trail is a five mile loop trail that starts and ends in the Monongahela National Forest's Pocahontas Campground, only a couple of miles west of the Virginia/WV border near Lake Moomaw.  You get there by taking WV 92 either north from White Sulphur Springs or south from Virginia Route 39 just after it crosses the state border.  It is only a few miles south of 39 near Rimel, West Virginia.  Trail Map.  I was out this way for other reasons, had a couple of extra hours, and decided to check it out.

The trail starts next to a map kiosk in the day use parking lot, which is before the campground loop. Park here and the trail curves around to a nice bridge over Two Lick Run after 100 yards. 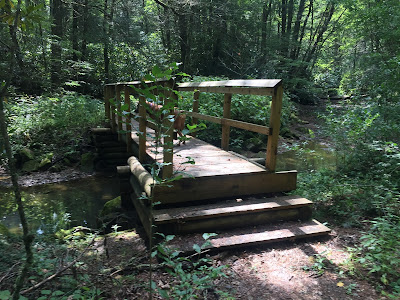 A few hundred yards later, the trail forks.  I took the trail counterclockwise, so I cut to the right here. There was another sign shortly after that, for the Two Lick Bottom Trail.  Because the Bottom Trail starts and ends at the Two Lick Trail, you can choose either one and make the loop; I chose to stay on the original trail. 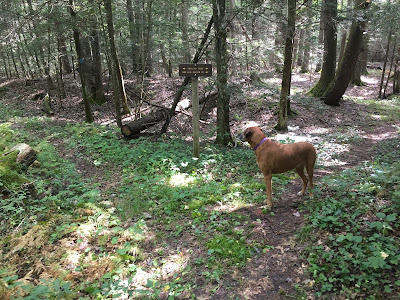 The Two Lick Trail then crosses another bridge before gradually climbing the mountain through open hardwoods. 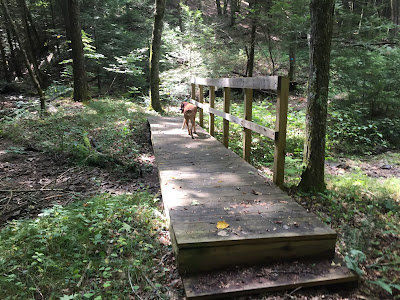 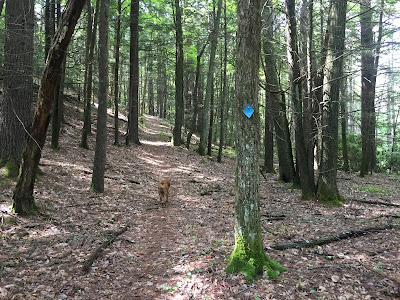 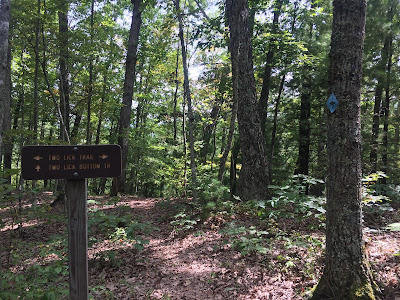 I kept ascending.  The trail was wonderful for its solitude and late summer vegetation. 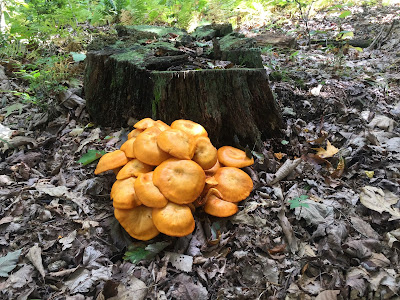 Unfortunately, all the climbing really didn't pay off.  The trail never summited the mountain - which would have had me at the state border.  Instead it turned and rode the ridge below the summit.  I think this is because, back when the trail was originally constructed, there was a road at the ridgetop, and it was decided to keep some distance from the road.  But it means there wasn't much of a view, other than the limited view shown below, reached at the 2.4 mile mark, just after the high point on the hike.
On the way back down, the trail crosses an old woods road, which the USGS topo map indicates continues up the mountain to the road on the summit.  But the old road bed was overgrown with late summer vegetation.  It did not look like anyone uses this route.
The trail was in nice shape - very well maintained and generally was prolifically blazed with plastic blue diamonds.  In fact the photo below had me thinking whether someone was paid by the diamond - there is no way to lose the trail here, with three diamonds over a space of 25 feet! 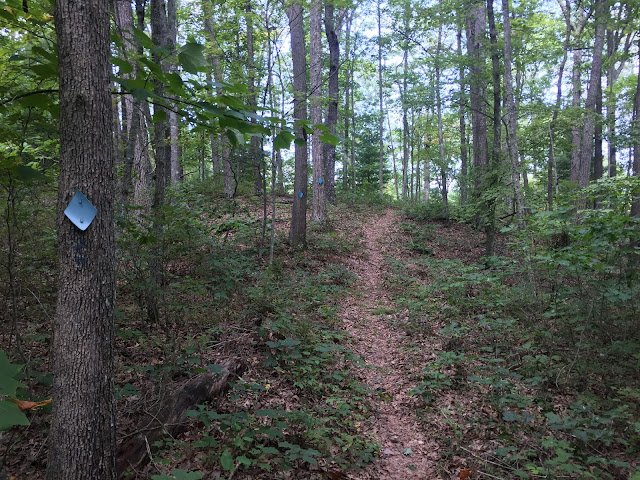 The campground is a pretty spot, with nine sites, pit toilets and waste cans.  The hand pump looks disabled, so there appears to be no water available here.  The Blue Bend Campground, also in the national forest but about a half hour south, is a superior choice for a weekend adventure.  It also has a five mile loop trail (into the Big Draft Wilderness), has showers and flush toilets, river swimming, picnic shelters, and access to the nearby Greenbrier River Trail for biking.