The Veach Gap Trail is part of a hike I did a few years back with my son and a friend, and it was my son's first ever hike of 10 miles or more.  I recommended it to a friend who is in charge of listing the hikes for the upcoming 2015 Appalachian Trail Conservancy Biennial, which will be held in late July, 2015 in nearby Winchester, Virginia.  The Biennial's theme is "Hiking Through History," and there will be hikes throughout Northern Virginia north into Pennsylvania.  I recommended this hike because of its geologic history, but discovered after returning and researching the trail that there is American history associated with the route, as well.

The trail starts in the Fort Valley of the Massanutten Mountain Range, which forms a big bowl. Drive through the Fort Valley and there is no cell service.  Just farms and churches and tiny hamlets.  It is a really beautiful place.  It is called the Fort Valley because it was considered as a refuge for the Continental Army during the Revolutionary War.

From the north, take the Fort Valley Road south from Rt. 55 out of Front Royal approximately 10.2 miles to Veach Gap Road (Rt. 774).  Take Veach Gap Road left (East) approximately 0.7 miles to trailhead parking, just inside of boundaries of George Washington National Forest, (N38 52.568 W78 22.666).  The route is on paved highways until the last half mile, which becomes a nicely graded dirt road accessible by any vehicle. Trailhead parking is at the end of the road and can accommodate about 8-10 vehicles.


The Veach Gap Trail is believed to have originally been Morgan’s Road, and was created at the request of George Washington.  During the Revolutionary War, General George Washington ordered General Daniel Morgan to construct a road over the eastern ridge into this inner valley. The road into the valley was readied as a potential retreat in case the Continental army was defeated at Yorktown. Washington knew this area well, as he had surveyed it before he became a general, and he knew the valley inside could be easily defended and would make a great spot to regroup the Continental Army if the British won at Yorktown.  Washington's forces defeated Cornwallis at Yorktown, the Americans won the war, and the road was not needed for the war effort, but Morgan's Road was used as a primary trade route in and out of the valley for decades after it was built.


At the hike's one mile point is the only confusing portion of hike.  The trail appears to lead to the Mill Run stream and cross it, where the trail/old road disappears.  Be observant for a trail to the right just before reaching Mill Run that takes hikers 20 yards upstream before crossing.  The road travels up the stream bed for this short section, but is obvious on the other side when the trail to the right is taken.  The trail becomes very rocky after the crossing, as is common in old, abandoned roads in Virginia.

Soon after crossing the stream hikers pass two anticlines, on the left, away from the stream.  An anticline is an interesting geological feature.  Most of the Shenandoah Valley is a syncline, a geologic formation that results in the rock layers folding concave up so that the youngest rocks are in the center of the fold, much like a bowl.  This occurred during the Alleghenian orogeny, which refers to the collision between land masses that would become North America and Africa and occurred 250 million years ago.  This collision folded and buckled the east coast areas of North America, creating the Blue Ridge Mountains.  However, in some spots, the great pressure created anticlines, or folds where the oldest rocks are in the center of the fold, and the fold is concave-down, like an upside down "U."  The anticlines you can see from the trail are bent rock that forms upside down "U" shapes with a hollow in the center, like a small cave.  Massanutten sandstone is normally an exceptionally hard rock; however it still bent over time.  For Geocachers, there is an Earthcache here that I composed several years ago and is found on geocaching.com.  (Link.)

Near the intersection, there are also a couple of small buildings near the stream that look like painted privies.  I am not sure what they are for – perhaps water measurement.  At this point, 1.2 miles into the hike, head left on the Massanutten Trail, which slowly climbs the drainage between Little Crease Mountain and Massanutten Mountain.

Climbing the mountain, you will see a campsite to the right of the trail, and, at about the 3.0 mile mark, take a switchback near the origin of Mill Run, which was flowing strong during my May hike, but may be dry in August.  The trail had several muddy sections during this part of the climb, but this wetness is no doubt seasonal.  As you gain elevation the forest changes from hardwood forest to White Oak, Virginia Pine, and blueberry.
After another 0.4 miles and one switchback, the trail tops the ridge.  At this point, the trail has been traveling through an area showing evidence of a forest fire.  This fire occurred in June, 2012, and was fought by a crew of 55 firefighters.  Because of the fire, the canopy is pretty open on the upper portions of the trail.  Hikers should be prepared for a hot hike with sunscreen and plenty of water, though the climb is gradual.

Once on top of the mountain ridge continue about a quarter mile to an overlook known as “The Point Overlook” (N38 53.161 W78 19.944). There is a small campsite just off the trail here – use this as the landmark for the overlook; do not bother bushwacking to the rocks prior to coming to this campsite.  From here, you can look 1500 feet down to "The Point," a 180 degree bend in the serpentine Shenandoah River, along with Shenandoah National Park and the Skyline Drive.  It is an amazing view and a great place for lunch.

Turn around here and retrace your steps to the Veach Gap Trail, but consider heading south for another ¼ mile, crossing Mill Run, to see the Little Crease Shelter (N38 52.184 W78 21.594).  This is reportedly the only shelter along the 71 mile long Massanutten Trail.  It has four raised sleeping bunks, each sufficient for a couple of hikers.  There is a large stone fire pit in front of the shelter, and a stone wall behind the fire pit.  The shelter has a large bear pole for hanging food away from critters.  And there is a privy about 50 yards behind the shelter.

Again retracing steps, it is about a mile-and-a-half back to the trailhead parking, past the anticlines and along Mill Run. I didn't see a soul on a spectacular spring Sunday, on trails only a little over an hour from Washington DC. 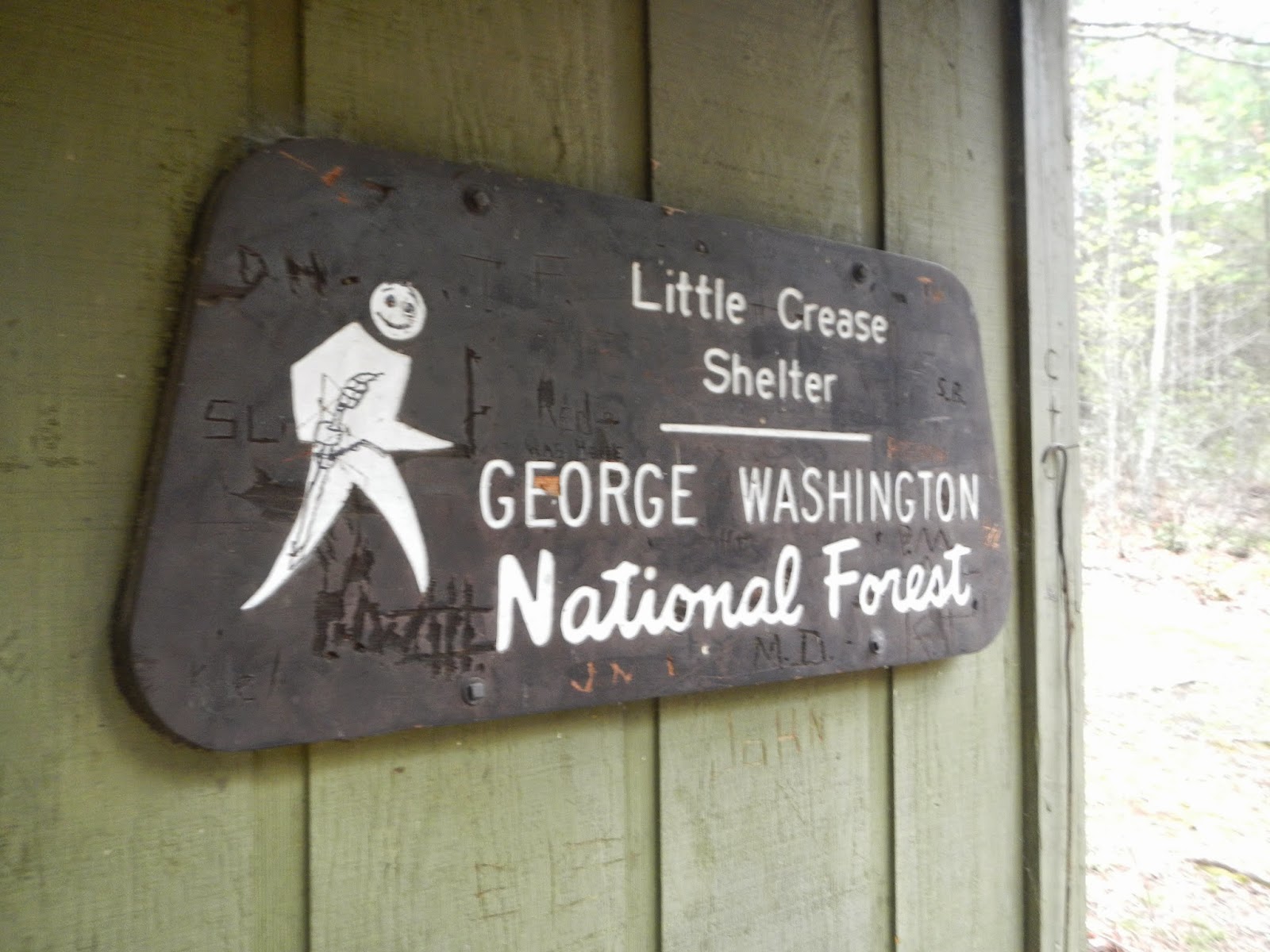 This is an easier hike than most I take on my own, but the trails coordinator for the Biennial tells me of a disconnect between hikers and hike leaders.  Apparently, hikers want easy or moderate hikes.  The leaders, on the other hand, prefer the harder workouts.  Although this hike really only has a couple of highlights over its seven-and-a-half mile length, I think it is the right difficulty for hikers looking for a nice hike with some history and views, without a tough workout.

Topo Map:  Link.
Check out my other blog postings here.