The weather in Charlottesville has been wet the past few days, giving me an opportunity to join the PATC's Charlottesville Chapter for a Saturday morning hike. My son's soccer game was cancelled due to wet conditions, and I bolted from the house to meet with the group at 9 AM.
There were only 5 hikers at the regular meeting place, with another hiker, a Harrisonburg resident, joining us at the trailhead. Was it the weather, or did I scare away everyone else the previous week's brutal bushwack to the 50 year old wreckage of a commercial airplane? Only veterans this day, and all were men.

We split into a couple of vehicles and met back up 43 miles later on the western edge of Shenandoah National Park just east of Grottos, Virginia. U.S. 340 provided views of numerous swollen streams heading to the South River, so we were not surprised to find Madison Run roaring next to us when we parked at the trailhead. A hike on the Furnace Mountain Trail would be out of the question today, as we could not possible cross Madison Run safely. Even a normally small stream becomes somewhat treacherous in March, as shown in the photo below. 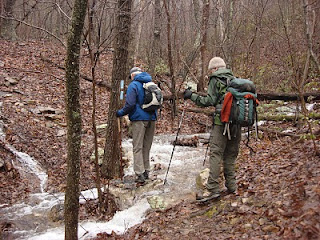 The hike was up the Austin Mountain Trail - one of my favorites in the Southern District of Shenandoah National Park because I have always thought that the trail is one of the steeper ones in the park. I was excited to record the trip on my GPS so I could confirm my belief about the steepness of the trail.
The highlight of the trip was the lessons in scatology we received from Michael, who is a professor at James Madison University. We saw several examples of fox scat, which has pointy ends and contained much hair. Michael taught us that fox usually deposit their scat on a prominent object like a rock to mark their territory. He also said that fox are much more prominent than we think, because we seldom encounter them.

We took the Austin Mountain Trail all the way to the Appalachian Trail, which we then took south to Brown's Gap and the Madison Run Road. After lunching at the intersection of the AT and the Madison Run Road (where we surprisingly ran into a backpacking JMU student who spent some of his Spring Break at the Blackrock Hut), we walked down the road back to our cars.