This posting is part of my effort to document trails in the North River District of the George Washington National Forest that don't have much in the way of online descriptions.   If you are interested in hiking trails in this area, I recommend obtaining the book, "Shenandoah Mountain Trails: A Guide to Trails on Shenandoah Mountain in Rockingham and Augusta Counties, Virginia." The book is written by Timothy Hupp of the Potomac Appalachian Trail Club and can be ordered from the Club's online bookstore.  This trail is also described in another PATC publication available from the same place - the Great Eastern Trail guide for Virginia.

The North River Trail (#539) is a 4.6 mile long trail climbing from FDR 95 (North River Road) up to FDR 85 (Shenandoah Mountain Road).  Climbing this trail takes the hiker to the very headwaters of the North River.  It should not be confused with the North River Gorge Trail (#538), which is further east near the main parking for the Wild Oak Trail. 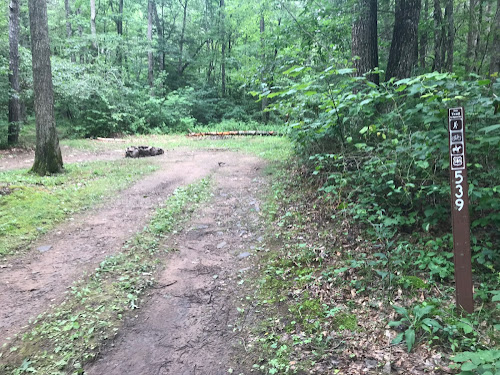 The North River Trail starts at a small traffic circle just off of FDR 95, between Camp Todd and the Shenandoah Mountain Trail's trailhead - west of the Wild Oak Trail.  This traffic circle had a fire pit in the middle, which makes me think it might sometimes be used as a campsite.  There are a lot of roadside campsites off of FDR 95.  If someone is camping here, it might be tougher to park here and hike the trail.  An alternative would be to continue on FDR 95 until you reach FDR 85 and turn onto that.  FDR 85 heads north to Reddish Knob and accesses the other end of this trail. 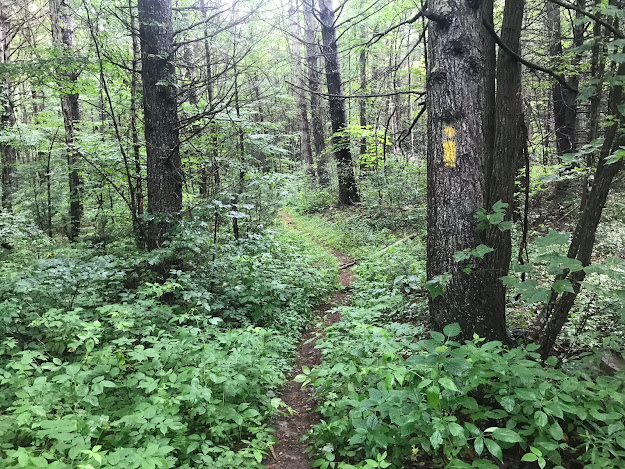 There are a couple of nice little campsites just off the trail within the first several hundred yards.  The nicest one is right on the North River to the left as you walk back from the circle.  The other one is on your right as you begin hiking the trail.


Hiking any water following trail in Summer usually involves a balance.  You like the fact that water is nearby and cooling, but the same water also attracts Stinging Nettle, which is usually short and not an issue earlier in the season - but not in Summer!  The Nettle is present along this trail, but was not impacting the trail itself, making this a good summer choice if you want a moderate climb. 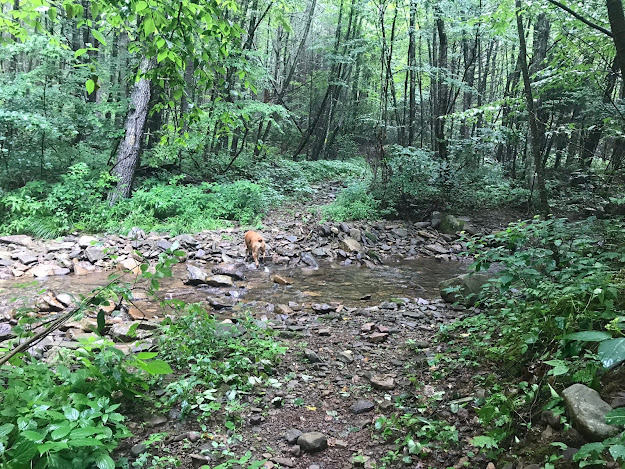 The trail starts out very mellow, climbing over the first 2.7 miles at a somewhat meek 3% grade.  It follows the course of the North River, crossing it multiple times with many delightful views of the river, and often seems to be following an old road bed. 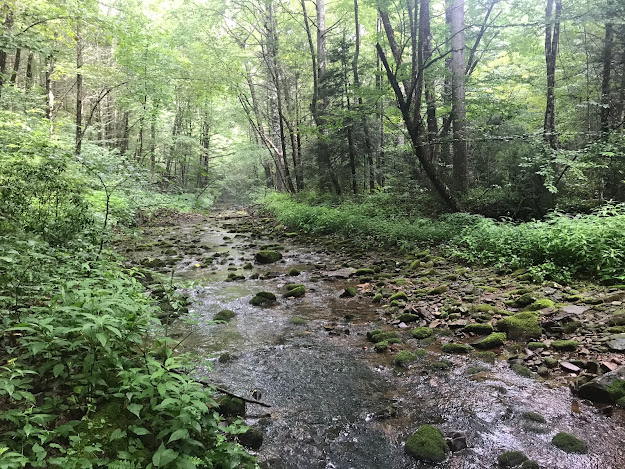 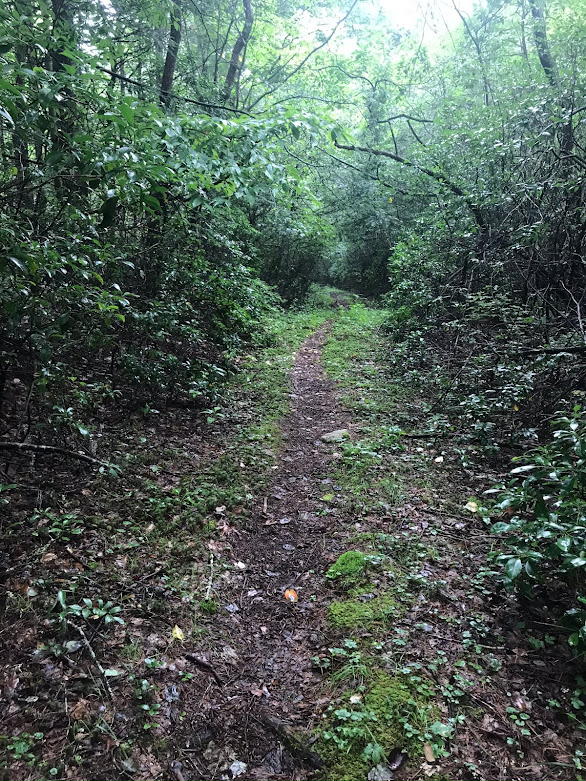 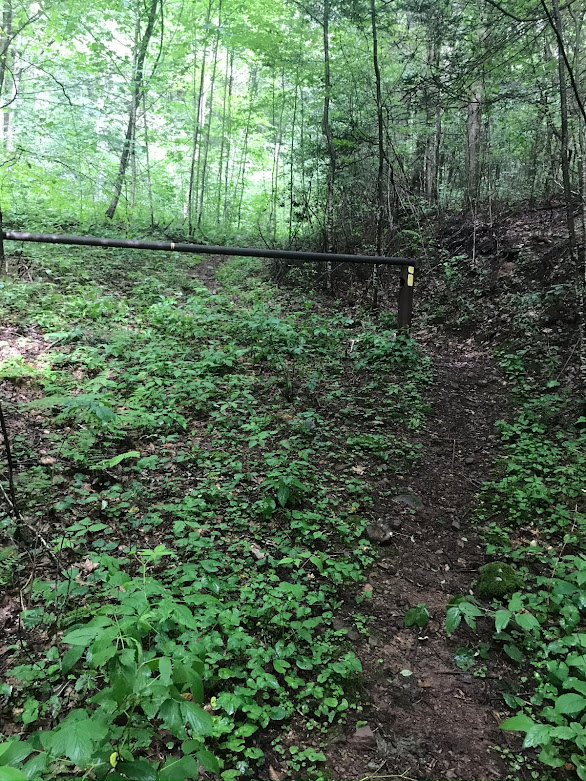 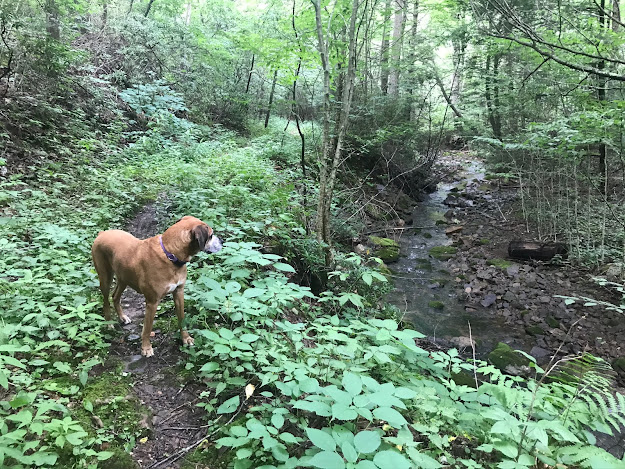 Shortly after the gate, the trail climbs away from the stream and becomes more steep, ascending at a 9% pace for almost a mile before dipping briefly and then climbing again at the same pace for another half mile after returning to a stream fork.  By this time, the trail has come to a T intersection, with trails heading east to the Little Bald Knob Road (FR427), or west to the Shenandoah Mountain Road (FR 85).  There is a large campsite just west of this intersection.  I checked out both directions, but heading left (west) is the better hiking route. 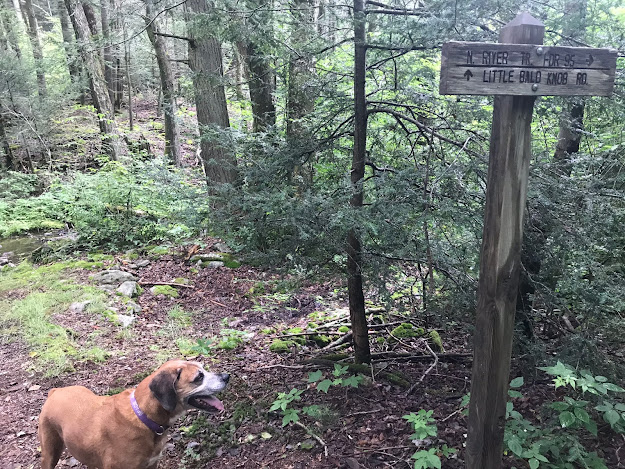 Mountain bikers use the this trail, even though it is often wet and their bikes leave deep channels. 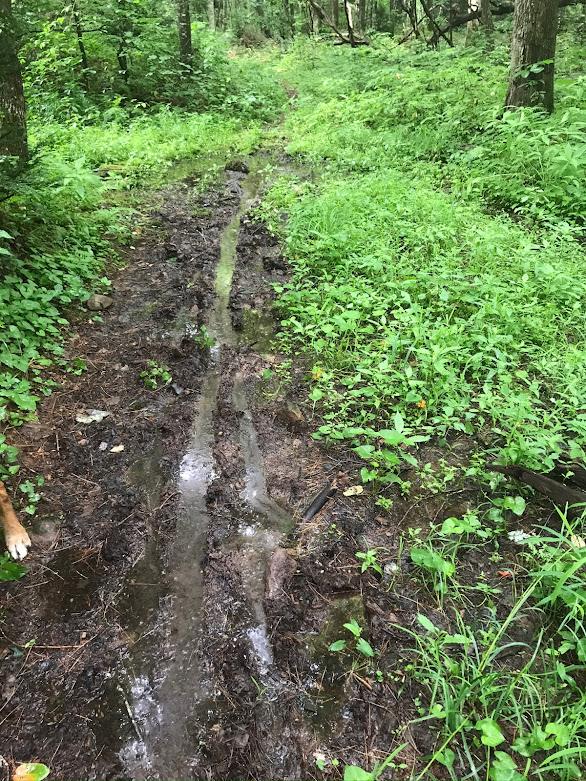 The Great Eastern Trail, which extends from New York to Alabama, also uses the eastern prong of this trail southbound, then turns onto the main North River Trail, heading to the North River Road.

To the west, the trail ascends though a field of Black Cohosh and becomes somewhat overgrown. 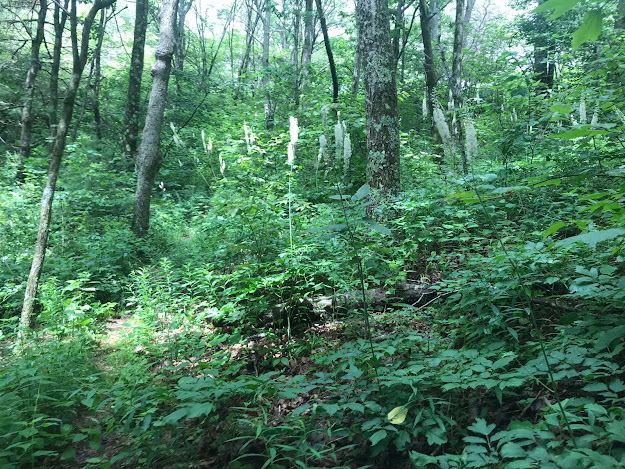 It passes a pipe with a small stream of water dropping out.  This is the source of this branch of the North River.  I drank from it without a filter, as it comes right out of the mountain.  It was great! 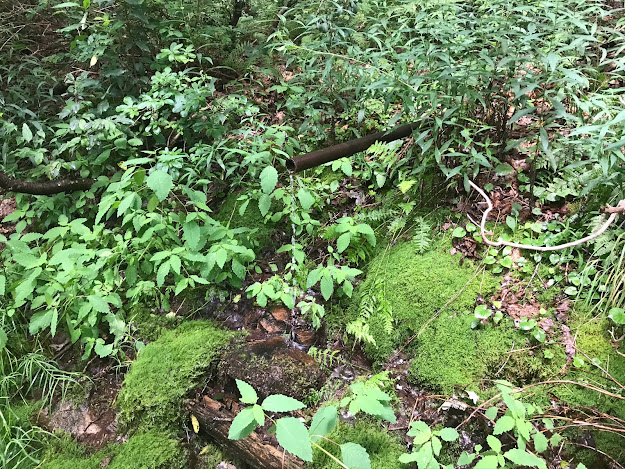 The trail reaches the Reddish Knob Road (FDR 85) just north of an area somewhat speciously known as the Shenandoah Mountain Picnic Area.  Although there is a hiker sign here, it is very easy to miss this trailhead if driving the road, due to Summer overgrowth.  The Reddish Knob Road here basically follows the boundary between Virginia and West Virginia, on the crest of the ridge that forms Shenandoah Mountain. 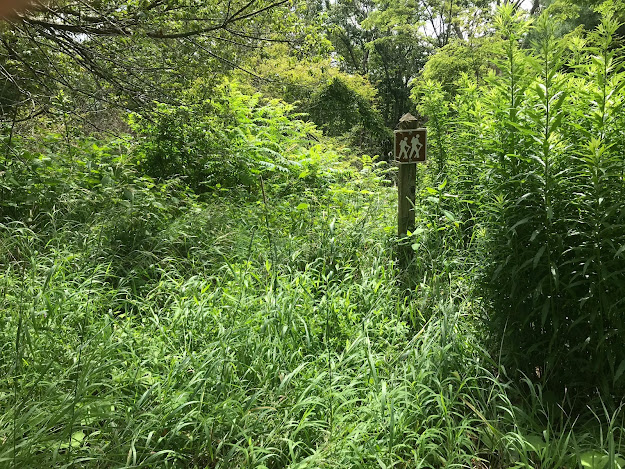 The Trails Illustrated map for this area shows the Shenandoah Mountain Picnic Area as featuring picnic tables and an outhouse.  It has neither.  In fact, it is just an overgrown parking area, as shown in the photo below. 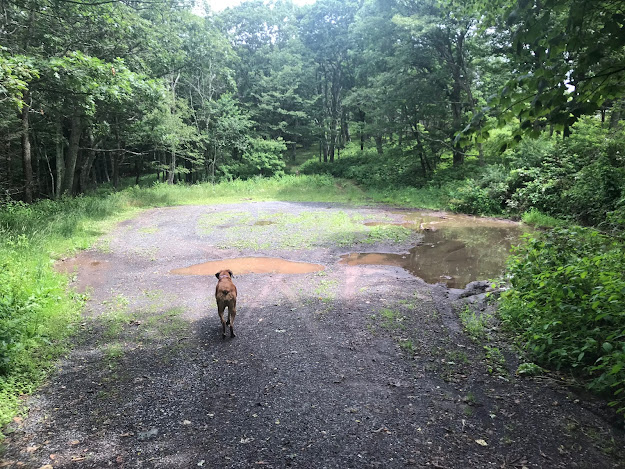 The best selling point for these maps is that they are basically a hiker's only option.  But their accuracy is consistently a problem, as these maps are constructed based on data they obtain from online sources and not from actual "boots on the ground" input.  They do send the maps to the local ranger districts for input - I once attended a meeting at the ranger district office which oversees this area and they had a revision on their conference table for review.  But this is not a priority for rangers who are already stretched thin, so a lot of errors never get caught.  This one is relatively minor, except for someone in the area who really needs an outhouse!  Walking around this lot, it does not appear that it has been used as a picnic area for decades, since probably before the first version of this map.

It is, however, perfect for parking if exploring the North River Trail from the north.

I turned around at this lot and retraced my route back to my vehicle at the south end of the trail.  Other hikers would do the same, unless a shuttle vehicle was left here.