My niece Lucy was in town this week on spring break from Tufts and wanted to take a hike.  Because I had read that the old parking lot at Old Rag was closing in April, I picked that circuit for us.  I really have no interest in adding a mile each way on the local road from the new parking lot, so I thought it would be a great time to get one last hike out of the old lot. The Potomac Appalachian Trail Club purchased land for a new parking lot (Shenandoah is prohibited by law from adding to its boundaries) that is a mile out from the old lot. 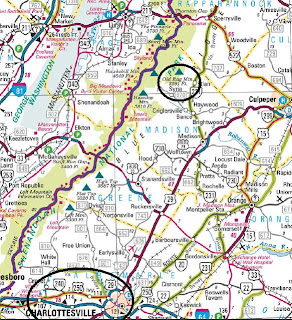 If you haven't ever lived in the Mid-Atlantic region, you might not be familiar with Old Rag. The upper reaches of the mountain remind me a lot of the White Mountains and of Katahdin, though this mountain is not nearly as high.  The top of the mountain has much exposed granite and the boulders are gigantic!  The mountain is also very accessible to the D.C. metro area, so it is often very crowded.  The combination of crowds and a large number of novice hikers with the difficulty of sections of the ascent means that traffic jams sometimes occur on the ascent!  I will never hike it on a weekend, but it is worth it to take a day to climb it mid-week.

We got up to the new lot only to find a sign saying that the old parking lot was closed and the road was reserved for local traffic only.  So I turned around and came in from the south, using the Berry Hollow Parking Lot, which is near the trailhead for White Oak Canyon.  NPS Map of Old Rag Area  The hike from the Berry Hollow Lot is 0.8 miles to the Old Rag circuit, but it is through very pleasant woods that had blooming daffodils.

We chose to complete the dull portion of the loop first, taking the Weakly Hollow Fire Road back to the closed parking lot.  I have memories of earlier circuits and getting to this road sore and battered from my ascent.  The road seemed to go on forever!  At the beginning of the hike it was a pleasant stroll, slowly dropping almost 850 feet in elevation over nearly 2.5 miles.  And reaching the old parking lot (which was still open for parking!), there were a couple of porta-potties at the perfect point in our trip.
From there, we take the Ridge Trail and our trip heads steadily upward.  For the next 2 miles, the grade is consistently at 15% before reaching the rocks and jumping to about 20%.  And for a brief tenth of a mile just before the top, it is an extraordinarily difficult 33% grade.  Anyone who has taken this trail remembers the section - it is both the reason for hiking the trail and the trail's curse when you are climbing!
Lucy and I were lucky we could go during the week in early spring because the trail was relatively deserted.  During the entire hike we encountered:
1) Two climbers and a dog in the parking lot,
2) A ranger in a truck on the fire road,
3) A young couple at the porta-potties,
4) A family of 4 racing up the Ridge Trail, and
5) A man with a boy about 10 and a girl about 13.
That's it!  It was very peaceful - not something that can often be said about this trip.

Lucy is about 5'2" and found the boulders to be demanding both physically and emotionally.  When you are scared of heights, even going boulder to boulder can be exhausting.  And the trail is more physically demanding, for a longer time period, than I remember.  At one point we moved less than half a mile in 47 minutes, though we kept moving the entire time.  We transferred our hiking sticks, removed my backpack and crawled our way over, under and through to get to the top.

Even the boulders at the top can be a difficult traverse for someone scared of heights like Lucy.  But we took it slow and made it to the summit where we gobbled down our Bodo's bagels.

At the summit we met up with a man and his two children. The boy was lagging pretty badly by that time. We exchanged cameras so that each of us could return to the bottom with a souvenir photo of our ascent to the summit.

The trip back down was less dramatic than the ascent. It was a 13% grade with a couple of day use shelters along the way. Views were to the north. My current profile shot for this blog was taken along the trail here.

We were back in Charlottesville by 4 PM, after a stop at the country store in Graves and a quick geocache in downtown Madison. At the end of the day, I did not feel as battered as I had been when I took the hike previously (I remember hiking this with Cullen and Suzie during the Fall before I was married, and have done it at least one other time, but not for years). My post-hike condition makes me think that I really am getting in better shape! On the other hand, that 17 mile roundtrip dayhike to the top of Half Dome in Yosemite this summer doesn't seem quite as appealing... 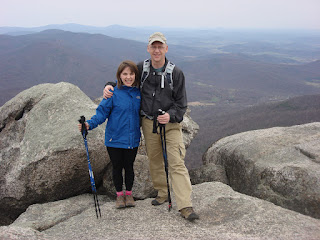