The Tea Creek area of the Monongahela National Forest is home to a network of interconnected trails offering a challenge to any level hiker.  Like its neighbor just to the south - the more famous Cranberry Wilderness - the Tea Creek trail system presents a physical and mental challenge to complete that far exceeds trail lengths and elevation gains, thanks to rugged terrain and wet conditions. Unlike Cranberry Wilderness, trails are well marked and are being reconstructed after multiple floods, due to the efforts of private mountain biking groups.  This loop hike begins and ends at the Tea Creek Campground that is maintained by the USFS.

I stayed at the Tea Creek Campground. What a delightful place! 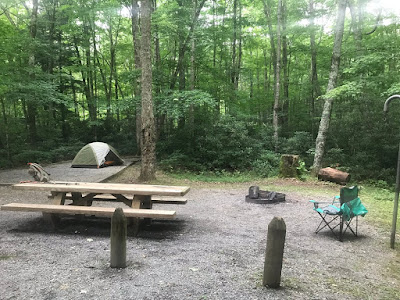 Large, private, quiet campsites for a great price - $10, but I paid only $5 because, as owner of a federal National Parks pass (valid for 5 more days), I qualified for a discount.

But I was unprepared for the temps.  It had been so hot in Charlottesville for so long that I just brought a summer bag and a wool blanket, and that would not have kept me warm in the tent.  So hiker dog and I slept in the back of the 4Runner instead.  It meant that we could not enjoy the sounds of Tea Creek when we slept that night. 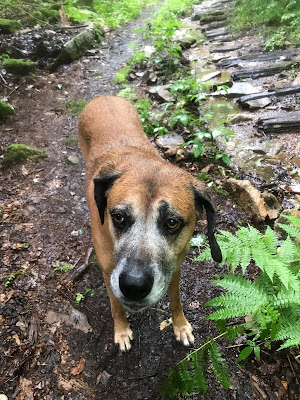 Driving up the road to this campground brought back memories for me.  Two Julys previous, I completed a 33.3 mile backpack in Cranberry Wilderness next door that included my toughest hiking day ever - 24.6 miles over 13 hours that included a trail that disappeared over the last 7 miles of the day. I was so spent at the end that I got sick when I reached my car.  This trip went easier, but the trail was still a lot tougher than it looked on the map.  On this loop, I got soaked and pelted with hail.  I slipped into Tea Creek during one crossing.  I came home with boots that took multiple days of cleaning to get rid of the mud.  Those boots had been waterproof in the past, but not on this outing.  Even the dog looked spent halfway through this loop!


As related in the trail description below, this area went through some devastating flooding in 2016 - most of the state was designated a disaster area.  Because these trails are open to mountain bikes, the bikers have been working hard to rehabilitate the trails after the floods.  Some of the trail work is amazing!  I don't think these areas would remain accessible without this work.  So a big thank you to those rehabilitating the trails. How you got the tons of gravel dropped on the trail miles from any road is an amazing mystery! 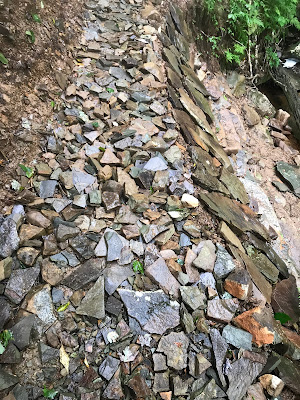 Here is a description of the loop I took when camping here.  11.7 miles, 1700 feet ascent, 6 hours to complete.  Slow!  Because there were tough conditions.

Mile 0.0 – If you don't camp there, you start the hike in the parking area at the front of the campground.  To your right you will see a kiosk and trail sign for the Williams River Trail, which you will use at the very end of this loop.  There is a hand pump here and parking for 6-10 cars.  The campground is relatively large with 28 private campsites – including some along Tea Creek. Start the hike by walking up the campground road on your right, straight up the road you used to enter the campground.  Pass the campground pit toilets on your left, then several campsites. 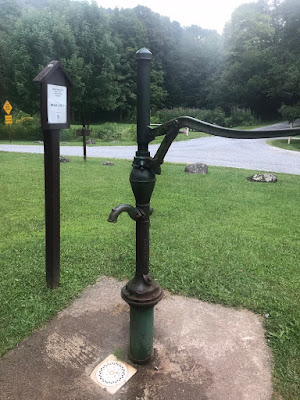 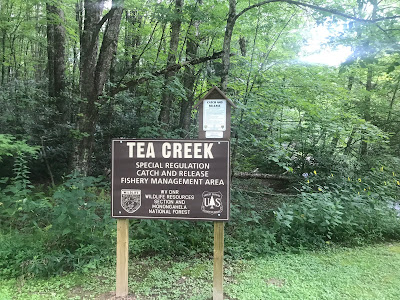 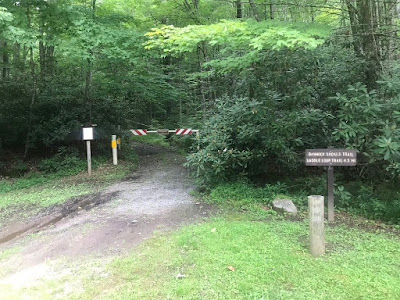 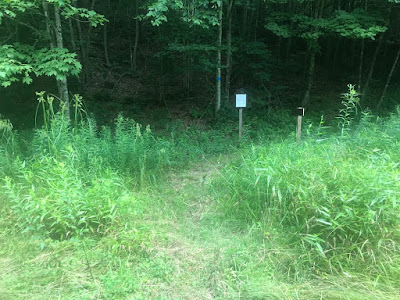 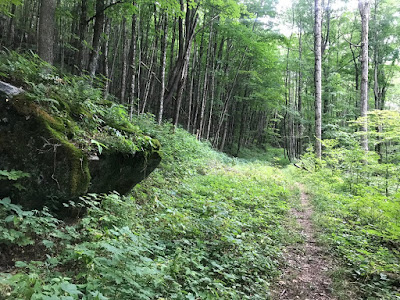 Mile 0.5 – The Turkey Point Connector Trail starts with a mild climb on an old woods road before  the trail leaves the road, switches back, finds another woods road, and begins climbing more steeply, reaching a grade of 20 percent for a while before the trail ends at the top of the mountain – one of the steeper trails in the entire state.  The trail is very rocky in parts, and looks much like several of the trails in Cranberry Wilderness to the south.  Although it would seem like a rough descent, this trail is reportedly popular with mountain bikers, and tire channels could be seen in every wet spot on the trail – indicating recent bike use.  Be alert! 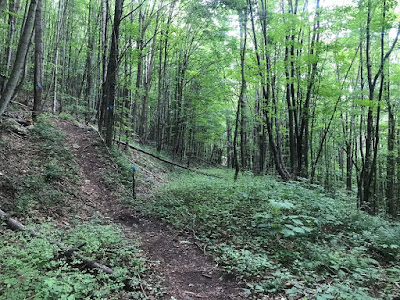 Mile 2.7 – After a brief level period, the trail begins to climb again while passing through an interesting area with large boulders. 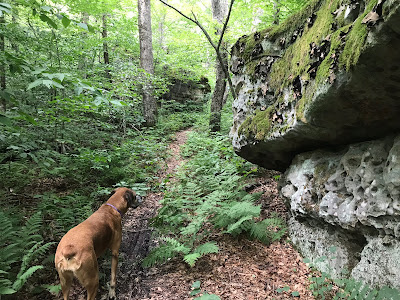 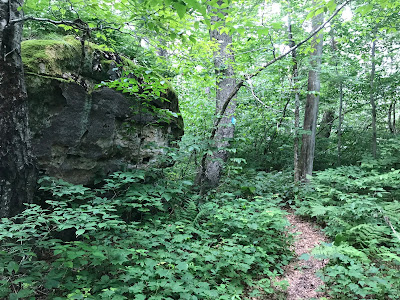 Mile 3.0 – An intersection with the Saddle Loop Trail is marked by a trail sign and a map.  Keep going straight on the Turkey Point Trail.

Mile 3.6 – Intersect with the Boundary Trail at the high point on this loop, just over 4300 feet elevation.  The Turkey Point Trail ends here. Continue to the right, downhill on the Boundary Trail, hiking along the edge of the National Forest lands.

Mile 4.1 – The forest opens up to the north due to some old clear cuts on private lands.  Some trail guides claim that beautiful views are available towards Cranberry Wilderness on trail sections crossed earlier on this hike, but those views did not exist in Summer. 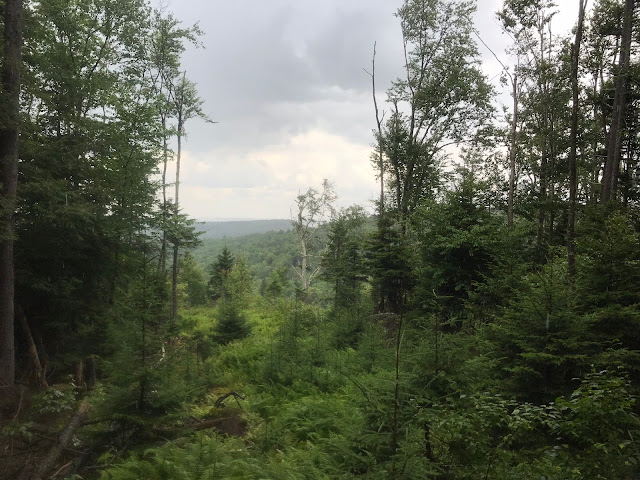 Mile 5.7 – Encounter the first of many stream crossings.  Note the old rail ties in the trail after this point – you will see them frequently, as the trail uses an old rail bed. The rails are long gone, but the ties remain in places.  Mountain bike groups are reconstructing trail sections to avoid the ties. 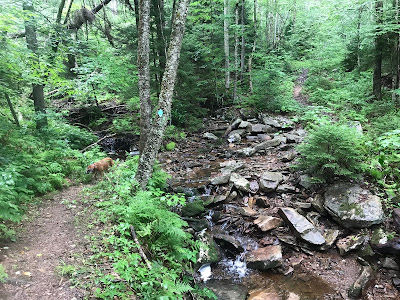 Mile 6.6 – Descend to two stream crossings in rapid order. The second crossing is the main branch of Tea Creek.  You will follow Tea Creek for the rest of the hike, back to your vehicle.  Don’t think that it will be easy however; this is a deceptively tough trail (especially if wet), which will have you descending another 1,000 feet over the next 5 miles.  Just after crossing Tea Creek, you will come to a somewhat confusing trail intersection.  The Boundary Trail ends at the blue blazed Tea Creek Trail, which you take to the right.  Just after that is an intersection for the Bear Pen Ridge Trail.  Stay to the right on the Tea Creek Trail.  This trail forms the backbone for much of the backcountry traveling in this area, so you are most likely to see other trail users during the remaining miles of the loop. 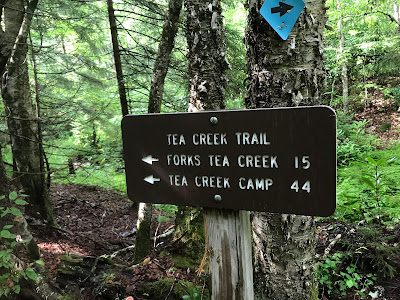 Mile 6.8 – Cross Tea Creek again, and keep crossing back and forth nine times over the next mile and a half. Keep an eye out for blue diamonds to help you determine whether to cross. When crossing, the rocks can be slick and the stream banks high.  This trail can prove both physically and mentally exhausting, but it is very beautiful.  It might remind you of the Ramsey’s Draft Trail in Virginia, though this is a tougher hike.  You should not have too much trouble figuring out where the name of the creek came from, after crossing it a few times. 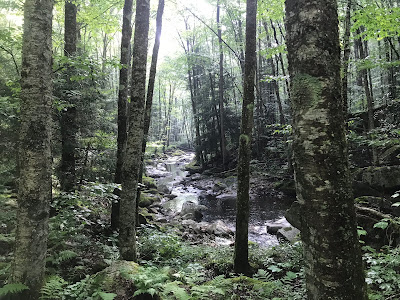 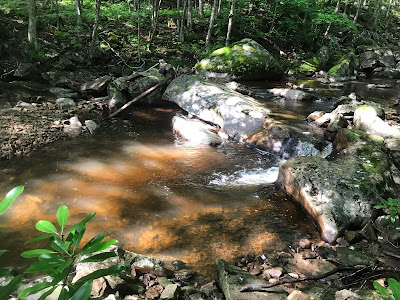 Mile 7.4 – Traverse a new section of trail constructed by a mountain biking group. Part of the reason this section of trail is so tough is its history – Tea Creek has washed away trail and bridges many times over the years, including in June 2016 due to a storm described as a “1,000-year event -- meaning that much rainfall in a single event occurs only once in about 1,000 years.”  Because of ongoing construction, this will probably be an easier hike as time passes. 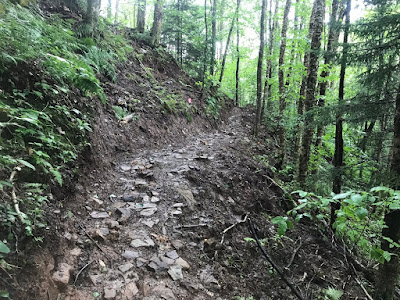 Mile 8.4 – You may find that the toughest stream crossing is over the Right Fork of Tea Creek. 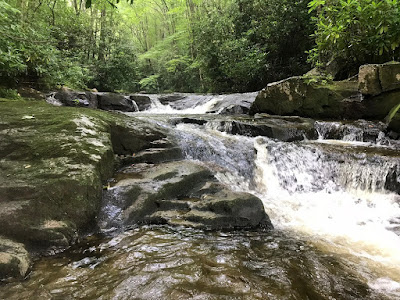 After this crossing, pass the trail intersection for the Right Fork Tea Creek Trail, which connects with the North Fork Trail.  Just after that is the one great camping option on this loop: an Adirondack style shelter (one of three such structures in the area). 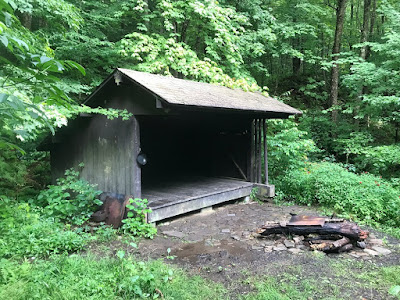 Mile 11.1 – The hike gets easier after the shelter, with no more major stream fords and less rocky ground.  But at 11.1 miles it leaves the Tea Creek floodplain and climbs part way up the mountainside before continuing south towards the end of the hike. There are stripped areas of mountainside with streams of water coming down, which seems to indicate high volumes of water washed away the soil in the not-too-distant past. 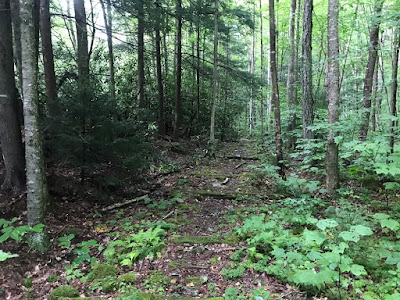 Mile 11.6 – Reach the Tea Creek Mountain Trail and the end of the Tea Creek Trail.  Turn right and merge into the Williams River Trail, which you take over a new pedestrian bridge, which replaced the one washed away in 2016. Underneath the bridge can be seen the line of rocks that hikers used before the bridge was replaced.  Stop for a minute to appreciate Tea Creek one last time before returning to the parking lot, 50 feet further. 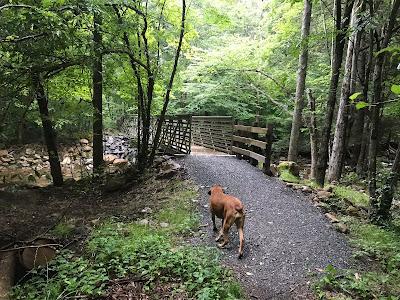 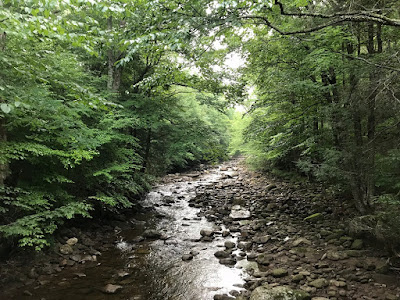 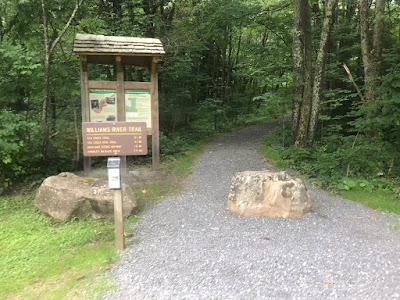