March 6th hike with the Charlottesville Chapter of the PATC was one I'd been looking forward to for a while - because I picked it. We traveled to western Albemarle County, a total of maybe 15 miles, to Mint Springs Valley Park. Our objective was off-trail and outside of the park boundaries, but was one that had been done by others as recounted in the HikingUpward website.
I had previously inquired with the administrator of another blog that had made this hike about whether we would be on public property on this hike. He responded,


You are correct, a good part of the trail is not on Albemarle County Park property. As soon as you get near the High Power Voltage lines and get off the county trail I assume that is "private" property. As per the recent write up in The Hook (excerpt below), even the gentleman who owns some of Bucks Elbow Mountain is not sure if it is on his property or if it belongs to an adjacent Lumber Company. We saw no "No Trespassing" signs anywhere on the hike. I think due to the public nature of this crash site that whoever owns it is OK with people going to it. The minute I receive any kind of notice not to go onto that property I would pass on that information through my blog...

The fact that we had a group approaching 20 hikers made this trip more difficult, especially because some hikers got ahead of the group. I missed the turnoff by a few hundred yards because I was so immersed in conversation. We backtracked and went off trail. Immediately after leaving the established trails in Mint Springs, we found ourselves under high tension wires. The land is basically denuded, but there are several trail options under these wires. The lead hikers logically took the steeper path, but this was the wrong option. We ascended at a 30% grade to the overlook rock listed on the map, then traversed across the mountain maintaining the same elevation from that rock.
The problem in early March was that there was still substantial snow at that elevation. And when we traversed to the wreckage, we came across random ribbons and even a cairn, which led us to believe we were on an established route. Five of us eventually made it to the wreckage, and descended more directly so as to miss the snow. 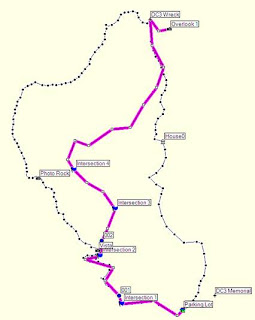 Our decent took us to an old roadbed which led directly into someone's backyard. Our group decided to trespass and hope for the best - you never know what might greet you coming down a mountain! But we made it to the driveway and down the mountain without incident. And when we saw a sign proclaiming that the property had been named "Stairway to Heaven," we figured we were pretty safe. An old Zep fan couldn't be too threatening, right?
I cannot imagine that I could find many trails in Virginia to match the steepness of this route. More on that in another post.