The weatherman didn't let me down - forecasts were correct that Wednesday, February 4th would be the best day of the week with relatively warm temps, little wind and blue skies. I was on the road early seeking to get in at least one loop hike in the James River Face Wilderness near Natural Bridge, and hopefully two, allowing me to complete all unhiked trails in this large wilderness area.

Good thing I was out the door early, as I had to turn around 5 miles from the trailhead because the Blue Ridge Parkway was closed, forcing me to take a 45 minute detour around the Wilderness to access the trailhead. I never saw more than a snowball's worth of snow the entire day.  (Directions from Charlottesville: Link.)

The trailhead is visible from the road as there is a large kiosk and several large boulders marking the trail's start, next to a small parking area (see photo below). This trailhead is just before a large bridge over Elk Creek, if heading from Natural Bridge to the Blue Ridge Parkway. The roads are easy to follow - in Natural Bridge Station, follow the signs for the Forest Service's Cave Mountain Lake Campground, then follow the signs leading you to the Blue Ridge Parkway. After a while, the pavement ends and you are in the National Forest. Full Disclosure: I did not have a map of the south end of the James River Wilderness (not prepared!), and still found the trailhead despite the closed BRP and never having hiked this trail before.  So it really isn't too hard to find.
This loop starts by ascending the Sulphur Springs Trail ("SST").  The guy who makes the signs for the USFS needs to know this - he spelled the name of the trail wrong! The SST is an old fire road, dating back before the James River Face Wilderness was established. It is a wide and gentle trail, though descriptions I have read says that poison ivy is prevalent in the summer.

The USGS Topo indicates a benchmark at the trailhead reading 1451 feet. After passing a kiosk with a wilderness area map, a trail sign and a wilderness boundary sign, the trail heads uphill along the side of Sulphur Spring Hollow before dropping over the stream bed and climbing the other side of the valley in the opposite direction. The trail maintains a constant 6% incline over its entire length, making for pretty easy hiking.

At the 2.6 mile mark is a large rock on the right side of the trail and some cliffs on the left side. Climb up 4 feet onto the rock for the best viewpoint in all of the James River Face Wilderness. The view looks southwest up the Elk Creek Valley, with Thunder Ridge on the left. No evidence of habitation is visible from this spot - really spectacular!
At 3 miles is the Appalachian Trail. I chose to head southbound on the A.T. at this point, as I had hiked all the other trails that meet up here over the past year, including the Piney Ridge Trail, A.T. northbound, and Sulfur Springs Trail north to the Balcony Falls Trail. The A.T. cuts south along the edge of a canyon, giving nice views of the side of the mountain I ascended on the Sulphur Springs
About a half mile after turning onto the A.T. is a flat area with a sign for an off-trail spring. There used to be a shelter here, but it was moved out of the area after the James River Face Wilderness Area was established in 1975. It is now the Cove Mountain Shelter, on the A.T. down near Peaks of Otter. I could not find any evidence of the exact location of the shelter. The shelter is still found on the USGS topo map, and is shown prominently on this map showing my hike loop: Link.

Prior to wilderness designation, this flat spot had a history of a trail shelter dating back to 1933, when the Natural Bridge Appalachian Trail Club built the first shelter while constructing the Appalachian Trail. Their website provides the following description:

[In 1933] club members built a wood and tarpaper shelter at Marble Spring, which was twice destroyed (once by bears, then by vandals) and rebuilt. It was reported that Doris Mathews and Louis Doggette mixed the concrete for the foundation of the first shelter with their bare feet.
By the time the PATC published the 4th Edition of Guide to Paths in the Blue Ridge in 1949, the "old lean-to here [was] unserviceable," and plans were in place for a future lean-to in this location (Page 14-308h).

A short descent off trail takes you to Marble Spring, which is the headwaters of Elk Creek's East Fork, a feeder stream for the James River. The spring was not running particularly fast, as shown in the video below. It makes me think that this spring is probably pretty dry in the summer. 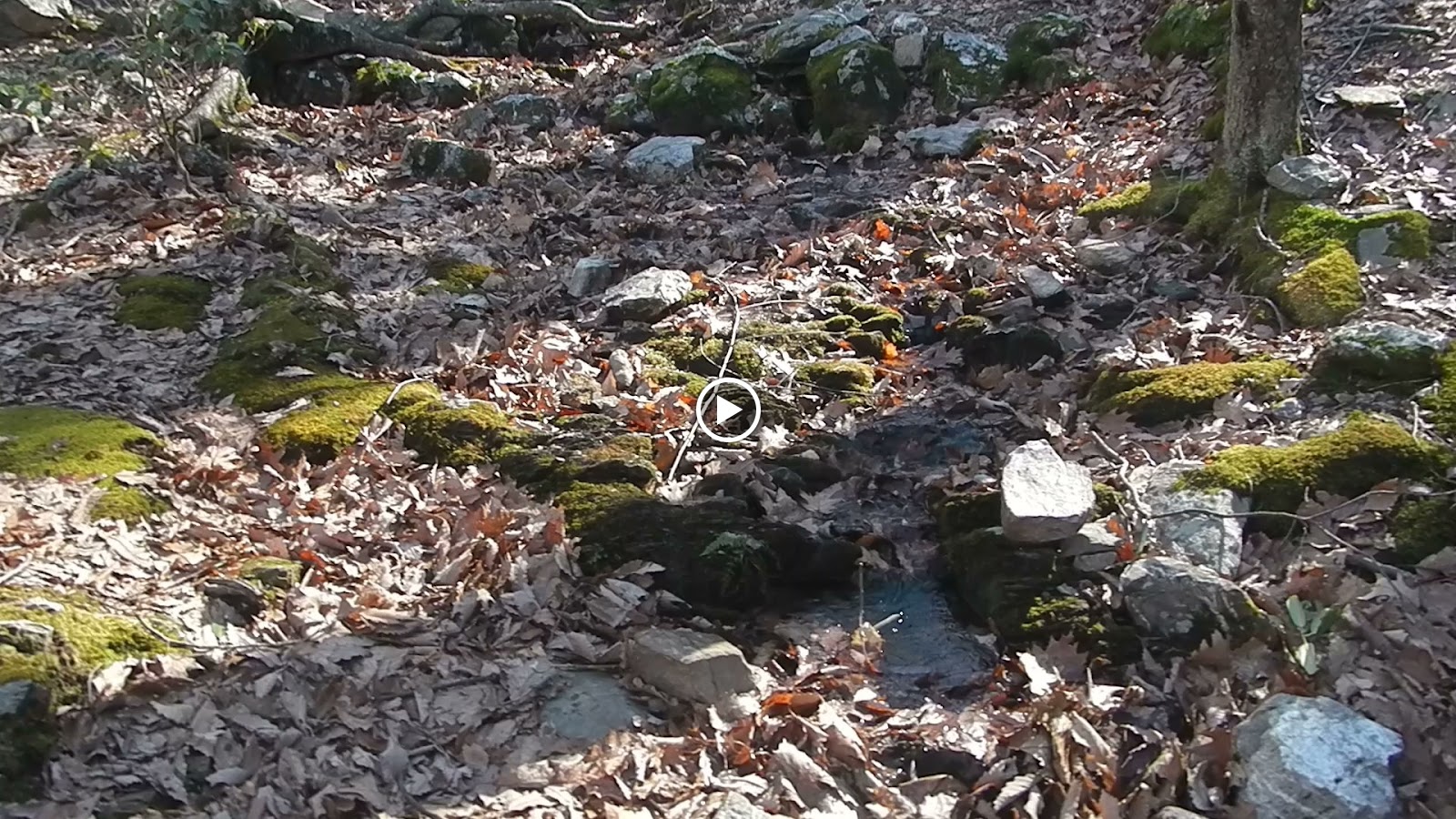 In the opposite direction a trail once existed that reached the Blue Ridge Parkway, according to one of my older A.T. guidebooks.  I can see evidence of the trail switchbacking down to the BRP on Google Earth, but doubt that the trail has existed as active for many years.  The 4th Edition of Guide to Paths in the Blue Ridge in 1949, stated of this trail, "Forest Service trail leads .8 m. to Blue Ridge Parkway at 4.6 m. from U.S. Route 501 and 2.7 m. from Petites Gap; this trail continues 1.2 m. farther to Peters Creek Road." (Page 14-308h).

After climbing part way up to Highcock Knob on the A.T., I came across a more interesting old side trail. At a point where the A.T. makes a sharp left turn (N37° 34.194' W79° 26.513'), an old, unmarked trail continues straight ahead. I can tell it was well used at one point, based on the moss on the edges and wear in the center of the track. Research turned up the information that this was the original 1930's alignment of the Appalachian Trail and was personally scouted by one of the original giants in the trail's history, Myron Avery. Avery was the Babe Ruth of the Appalachian Trail, credited with building much of the original trail, and a member of the inaugural class in the A.T. Hall of Fame. (Link.)  The trail was already superseded by 1949, as the NBATC had constructed a trail over the summit of High Cock Knob, though the summit's "view is obstructed by timber." (Page 14-308i).

It comes out on Petite's Gap Road right where the Glenwood Horse Trail leaves the road in the opposite direction. The trail is obvious from both end points, and can be seen on Google Earth.  I will go back and check it out sometime.

I didn't take that trail on this hike, but continued climbing to the peak of Highcock Knob, at the 4.8 mile mark. At 3073 feet elevation, this is the high point of today's hike and the highest point in the James River Face Wilderness. It is 1622 feet higher than the hike's starting elevation. Unfortunately, it is a tree covered peak, so views are limited, even in Winter. The last half mile is really steep, climbing 431 feet at over 18%, or nearly 900 feet per mile. This is three times as steep as the Sulphur Springs Trail's 6% incline.

The trail drops down after summitting Highcock Knob, but not for long. There is one additional short, steep climb, shown below.
There is another rock providing a viewpoint on the south side of the incline, though it is more obstructed and not as spectacular as the one on the SST. After this, the remaining 3.5 miles is all downhill. The A.T. reaches Petite's Gap Road at the 6.0 mile mark, and I took the road back down to my car at the Sulphur Springs trailhead. Because the Blue Ridge Parkway was closed, the upper end of Petite's Gap Road was gated. So I knew that no traffic would be coming up behind me as I descended. It took 2.75 miles to reach the car and the end of the hike.


Hike details, from my GPS:

Like what you see?  Scroll through my other blog postings: LINK.
Posted by Jeff M at 3:41 PM No comments: