I've been over Forge Mountain several times, but stayed away from putting the hike on hikingupward because the start of the trail is a little hard to follow.  Here is how it works.

Start in the same parking lot where the swinging bridge at the beginning of the Jump Mountain hike.  Instead of crossing the bridge, head back to VA 39 and cross the road.  Directly across the road you may see a white blaze.  That blaze signals the Guy's Run Trail.  You are going to follow that up a little valley for a couple hundred yards before the trail cuts diagonally out of the valley to the right. It may be hard to see.  You'll go up about 20 feet in elevation and level out in a somewhat swampy area.  You should see some cut logs in the area.

As you approach Forge Mountain, it can also be a problem following the trail again.  I remember my first time going through a downed tree that had been sawed - it was obvious that I was on the trail.  But I could not tell where the trail went next.  After a while I figured it out - it cut up the slope to the right at an angle and then switchbacked to the left.  You may see some white blazes, but really, you need to feel for the trail here.  Once you get past here, though, the rest of the trail is pretty easy to follow.
At 0.4 miles from your car, the Guy's Run Trail comes to a T intersection at an old road.  To the right, the trail goes out to the Guy's Run Road, which climbs all the way to the summit of Big Butt Mountain.   It can be a great way to return to this point., instead of retracing over Forge Mountain.

For now, take a left on the road, which is the beginning of the Forge Mountain Trail.  It continues for a while and then cuts right, heading directly up Forge Mountain. The climb can be steep at times.

At 0.8 miles, keep an eye to the left of the trail for a sign telling you about a side trail to a small overlook that has a view of Lake Merriweather to the north - which is surrounded by Boy Scout camps from the DC area. The viewpoint could use some trimming.
Other than that, you will head straight up Forge Mountain without switchbacks.  During the warmer months, you will notice a lot of Sassafras along the climb. 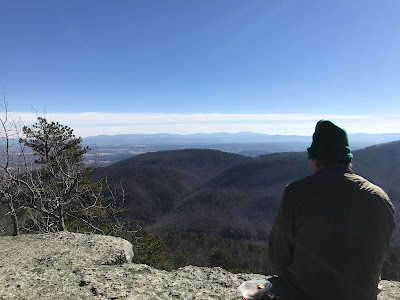 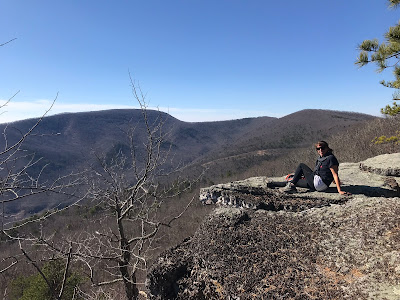 At 2.2 miles, you will have crested and begin to see an overlook on the left.  Stay away from the edge at first, as the overlook is better 50 yards further.  Be sure to stop - this is the money spot of this hike, with views east of Big Butt Mountain and beyond to the Blue Ridge. 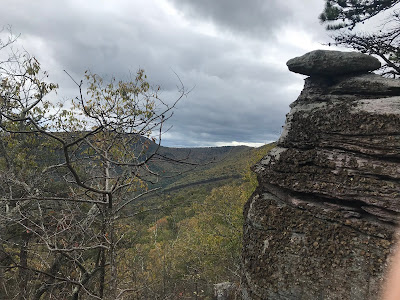 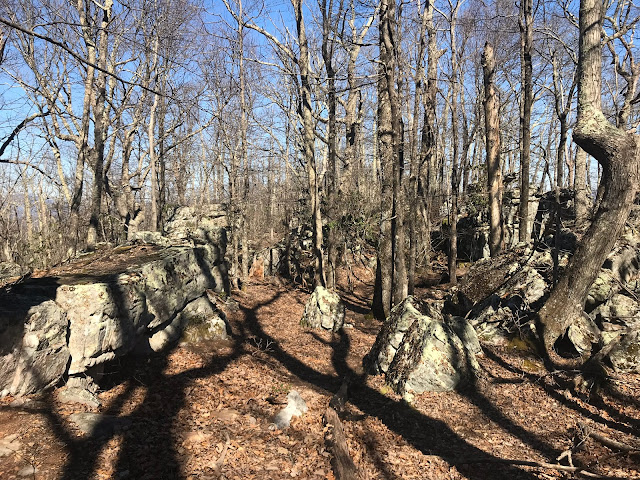 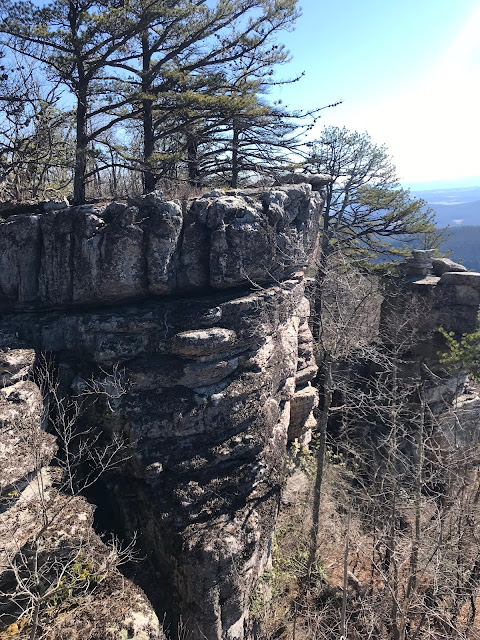 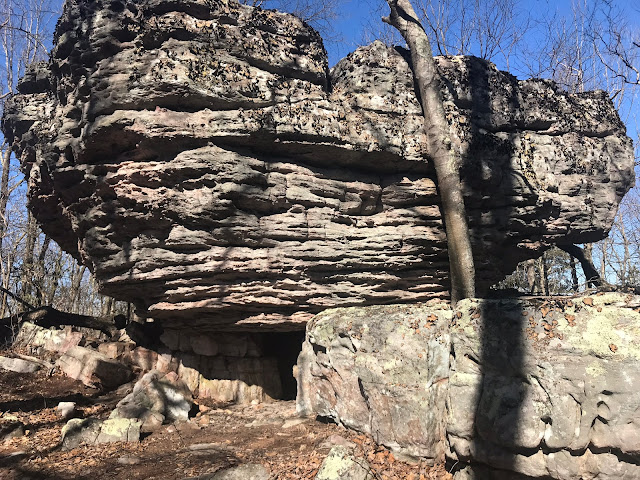 There are many options past this point, and I've now taken all of them.  To the right, you can follow the trail under the power lines,  It takes you to some great views before dropping precipitously as a bushwhack to Guy's Run Road and the other end of the Guy's Run Trail.
To the left, the trail under the power lines takes you down to the Laurel Run Road, which comes out on 39 at the picnic shelter in Goshen Pass.

Going straight across the power lines will take you to the Cooper's Knob Trail, also white blazed.  It can be hard to find in growing season - I did not find it the first time I hiked this area in October, but when I hiked it in mid-March, it was very easy to see.  This trail climbs over Cooper's Knob then drops down to a road at 4.1 miles. This road, to the right, connects with the Guy's Run Road and to the left, summits the 3451 foot high Big Butt Mountain at 5.9 miles.  The Big Butt summit, though now tree covered, once included a fire tower which must have had a commanding view of many surrounding counties.  Near the top of Big Butt is another trail, which heads back north towards the power line cut.  It is essentially a bushwhack, though it contains occasional white blazes, as shown below.
If you take this route back from Big Butt summit, be sure to stay on the ridge top.  After a while, the road that seems to be the trail cuts right (east) down the mountain - do not follow this!  Staying along the ridge, you will sometimes see a trail and sometimes not, until you reach the power lines.  Turn left (west) and follow the power line road down to Laurel Run.  There is a road here which could take you out to a shuttle vehicle on 39 (by far the best option!), or you could climb the power line road back up to the end of the Forge Mountain Trail.  This climb is brutal!  If you do this, be sure to follow the road behind the metal gate to the right.  I am not sure where the road to the left goes.
A hike up Forge Mountain, over Cooper's Knob, summitting Big Butt Mountain, then following the ridge back to the power lines and back to the Forge Mountain trail, is 12.8 miles with 4075 feet elevation gain.  The elevation profile is shown below. 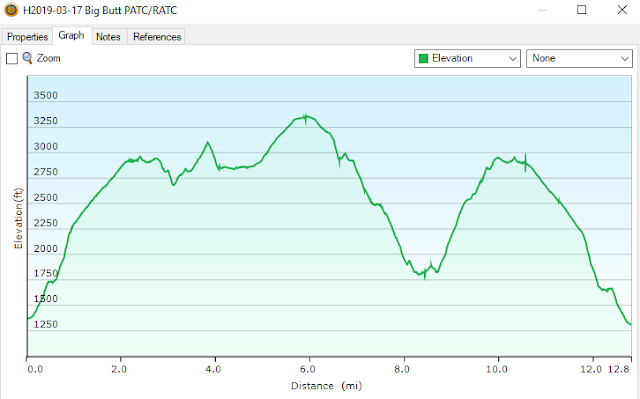 A hike up Forge Mountain, then down the power line cut to Guy's Run Road and looping back to the beginning of the trail via the Guy's Run Trail, is shorter and easier at 7.9 miles, though the drop off of the mountain is a steep bushwhack.  The Guy's Run Trail is not marked from the Guy's Run Road, but it starts as a gated road on the right, next to a campsite, that quickly crosses Guy's Run. 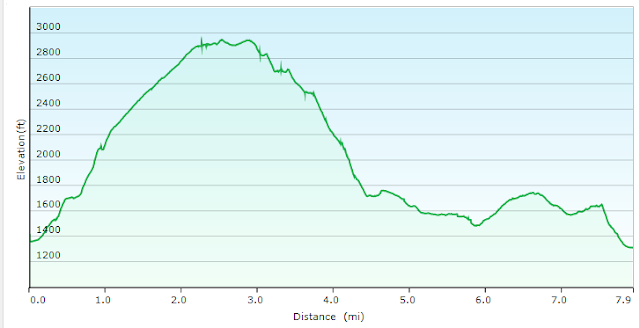 Middle Mountain forms the western boundary of Douthat State Park.  This loop hike starts and ends in the George Washington National Forest, and clips the northeastern corner of the State Park.  This is a hike best taken during the winter because of a lack of open viewpoints.


Mile 0.0 – Park at a wide spot in Smith Creek Road, just after the road crosses Wilson Creek.  There is parking for 3 or 4 cars here.  At first, you may not see the blue blazed trail leaving the road because the trail sign is gone – only a post remains.  It is on the other side of Wilson Creek from where you parked.  You drop down next to the creek before ascending.  The ascent is a quick one as the slope of Middle Mountain is steep, but a series of superbly constructed switchbacks make the ascent a relatively easy one.  The Civilian Conservation Corps likely built this trail during the Great Depression, based on a review of historic topographic maps. After several switchbacks, look down, and it seems like you are directly above the road and the creek.
Mile 0.8 – Paint blazes on the trees indicate a fork in the trail, however there is no trail sign at this intersection.  You will return on the trail to the left (the Brown Mountain Connector Trail), but should now take the trail to the right.  The Middle Mountain Trail now sports both a blue and a yellow blaze for the rest of your hike on this trail.  The yellow blaze represents the Allegheny Highlands Trail System, a 63 mile system of hiking, mountain biking, and equestrian trails connecting Douthat State Park with George Washington National Forest lands in Bath and Alleghany counties.  Up until this point of the hike the trail has been “hikers only,” but your route now opens up to horses and mountain bikers at this intersection.
Mile 2.9 – You will continue to climb for the entire time you hike the Middle Mountain Trail, with wintertime ridge top views of Douthat Lake, the sawtooth mountains to the left and additional mountains to the right.  The high point of the hike is at a trail intersection.  You are now about 1000 feet higher than the start of this hike and are in the northeastern corner of Douthat State Park.  Take the orange blazed trail to your left, leaving the crest of the ridge and descending for nearly two trail miles, into Douthat State Park on the Salt Stump Trail. Note that Douthat State Park prohibits camping outside of designated campsites. If you choose to make this an overnight backpack, the ridge of Middle Mountain is probably your best bet.

Mile 4.1 – After hiking along the slope of Middle Mountain, come to a trail intersection with the yellow blazed Pine Tree Trail on your right.  Continue on the orange blazed Salt Stump Trail to the left.
Mile 4.4 – Cross a stream.

Mile 4.7 – Another trail intersection.  Take the trail signed Brown Hollow Trail to the left, which is both yellow and blue blazed.  At this intersection, the trail exits Douthat State Park and re-enters the George Washington National Forest.  The forest composition changes dramatically here, becoming a thick canopy of relatively young trees.  This area appears to have been clearcut at some point in its history.


After a stream crossing and a brief walk straight upslope, take a right onto an old woods road.  Perhaps this was the access road for the clearcut? 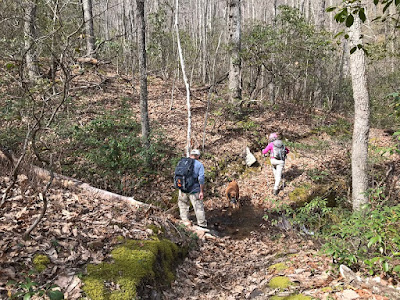 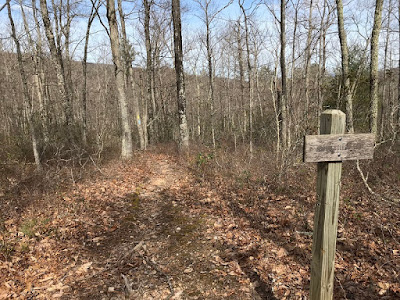 Mile 5.2 – Pass a small wildlife pond on your right. This section of trail may be somewhat overgrown during some parts of the year.


Mile 5.4 – Cross another small stream.
Mile 6.5– Arrive at the end of the forest road open to traffic part of the year. FS125A, Brown Hollow Road, is open April and May, and again from September 1 through the end of January, but is gated the rest of the year.  Continue on this road, over a stream.
Mile 6.9 – Look for a trail on your left as the road curves sharply left. There is no sign here.  Follow uphill the trail, which is blazed yellow and blue.  Begin an ascent that lasts a little over half a mile; it is your last ascent of this hike.
Mile 8.0 – Complete the loop by arriving again at the Middle Mountain Trail.  Take a right here, to retrace your steps and descend Middle Mountain to your vehicle.