There is nothing that can bring out passionate hikers than the question, "do you use a GPS?"  Predictably, there is a tsunami of responses that accuse GPS users of being clueless about their location in the woods and unable to use a map and compass.  And it makes some GPS users defensive, like this blogger.

I think the haters are ignorant.

Let's get one thing straight: nobody loves maps more than I do.  I have been collecting them since at least the third grade, and by age 10 could spout for a half hour about which gasoline companies produced the best road maps.  (I am pretty sure that I am solely responsible for gas stations charging for maps - I would always clean them out when on family road trips.)  I have several maps on the wall in my office, ranging from a relatively new map of the entire Appalachian Trail to an 1855 map of the United States that measures 4 feet by 5 feet.  I treasure the framed 1842 map of the United States over the piano at home.  I am a volunteer for the local trail club's Map Committee.  And I teach map and compass to the Boy Scouts.  In short, I can map and compass circles around most hikers out there.

And I love my handheld GPS.

I never go on a hike without my GPS.  I also take a map and compass.  I use both.  But those who accuse GPS users of having suspect skills are plain wrong.  Both tools have their place.  I don't bring a GPS to help me in case I get lost - a good use of the maps will keep me from getting there.  But there are times when I need an assist and the GPS has helped.  An example is coming down Mt. Lafayette in New Hampshire on the A.T. last summer.  Mt. Lafayette is the tallest mountain in the state not found in the Presidential Range. The top of the mountain is a boulder field.  It is a little harder to find your way there than it is when following a dirt path through a grass covered southern bald.  When I got off course there, my GPS told me to head to the right 20 feet to get back on the trail.  No amount of map and compass expertise is going to tell you that.
So what is it that gets some hikers riled up about GPS use?  I think there are several things, ranging from elitism to a concern that some hikers out there are not prepared to explore the wilderness.  But I also think a lot of them equate a handheld GPS with the units people have in their cars.  (Which, by the way, I do not have in any of the family cars.)  Listen folks, a handheld does NOT tell you to turn right in 300 steps!

I have not been blogging much this year, even though I am on pace to set an annual record for most miles hiked.  Much of my time has been spent measuring trails for the Potomac Appalachian Trail Club, using my GPS to increase the accuracy of their maps. The group that is currently obtaining GPS data for each trail in the club's 19 maps.  This has gotten me back on several trails I hadn't hiked in two decades, and added considerably to my own library of GPS trail data.

Several of my colleagues have purchased new Garmin GPS units recently, and I have given them some advice.  It has me thinking that I should go live with a GPS blog - there aren't that many out there, and a new GPS requires a learning curve.  So I am putting out information on that blog specific to learning a new GPS. Check it out!  LINK.
Posted by Jeff M at 10:09 AM No comments: Near Roanoke, the A.T. leaves the Blue Ridge and enters an area of Virginia known as the Valley and Ridge region.  This area is characterized by long folds in the land, creating mountains that look more like large, dead snakes than sharp peaks.  Hiking this region consists of relatively short, steep inclines, long periods with little elevation gain, and steep descents, before crossing a stream valley and doing it all over again.

The Roanoke Appalachian Trail Club led a hike on the first Tuesday in December of one of the sections of A.T. they maintain.  The club has divided up the 120 miles of A.T. they maintain into 14 different sections, and I have done the first eight.  Because it is such a long trip from Charlottesville, I convinced them to allow me to drop my car further up the trail so I could combine their Hike #9 and their Hike #10.  If you are a RATC member and hike all 14 sections, you can earn a patch for your backpack, which I believe shows a blind man about to fall to his death off of McAfee Knob!

After an 8AM meetup with the group at their usual carpool spot - a place called the Orange Market near Roanoke, I dropped my car just of of Virginia Route 42 in a parking lot on a back road.  From there, I joined a carpool to the trailhead, on Route 635 near the town of Interior, Virginia. (Map and directions from Charlottesville: Link) This is really, really remote area!

We started at 9:48 AM near the edge of the Peters Mountain Wilderness at a parking lot with a large kiosk featuring a map of the area.  We were on the A.T. after a 100 yard journey on a side trail, and wound somewhat mysteriously over hills and streams, only to cross a large bridge over Big Stony Creek and then the same road we came in after 2 miles, and 40 minutes, of hiking.  I can only think that the road itself used to be designated the A.T., and a large amount of work was needed to get it off the road and hugging some steep slopes.

By the time we crossed our road, one other hiker and I had left the 3 others in our group, but my colleague lost steam heading up our first mountain, called "Big Mountain."  After heading back down the slope to check on him, then waiting for him for several minutes at the Bailey Gap Shelter at the 3.6 mile mark, I moved on, knowing that there were members of our group on either side of him.  I knew that daylight was precious, and I would never make the required distance before it got dark if I waited too long.

The A.T. never seemed to find the top of Big Mountain, preferring to travel along the mountain a couple hundred feet below the ridge line.  It appears from maps that the A.T. once topped the mountain, but it used a woods road, and likely the trail is now off of the ridge to avoid that road.  This section was pretty rocky, so the going was relatively slow.  After 7.2 miles, I entered into the Mountain Lake Wilderness and quickly came across a couple of large outcroppings with wonderful western views.  At one of these outcroppings, called Wind Rock, was the rest of the group, heading southbound on the trail to swap keys with the northbound group.  They were having lunch, and I stopped to check in (briefly) and let them know that the other hiker would have to take the shuttle car, rather than my vehicle. 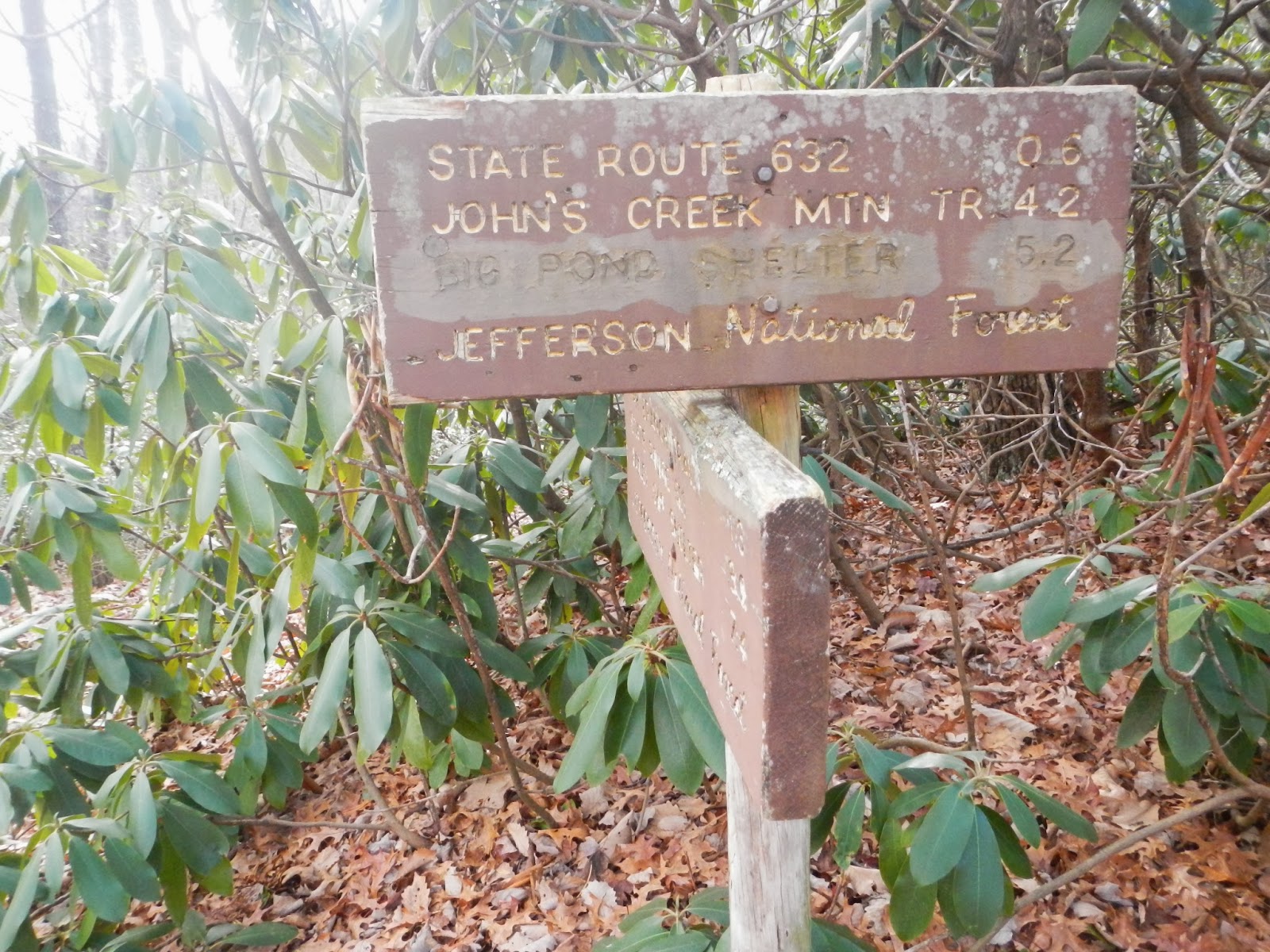 Unfortunately, after leaving Wind Rock, I followed the Potts Mountain Trail rather than the A.T.  Figuring that blazing was at a minimum in the wilderness area, I realized my mistake when I pulled out a map to confirm. Fortunately, the A.T. parallels the PMT only a few hundred yards downhill, so I was quickly on the correct trail. Once headed in the right direction, there were few rocks and the trail flew by.  I stopped only to drink water out of streams via my Sawyer Mini Filter - I forgot a water bottle and didn't have time to buy one at the Orange Market. The filter required me to suck directly from the stream, so I had to stop progress to hydrate.  The Sawyer Filter worked great - it is really an incredible instrument, adding only a couple of ounces to my pack's weight.

I stopped a couple of times for water near the Warspur Shelter.  (Really, I just like writing that. What a great name!)  Then I flew downhill past a parking area where my fellow hikers would end their hike, and started back up the A.T., hiking past Rocky Gap to the summit of Johns Creek Mountain Trail.  This was a really tough climb! It averaged at about 20%, and was 15 miles into my journey, so I didn't have a lot of extra gas on this ascent.

The trail signs in here were really old.  Several had mileage for the a former Big Pond Shelter painted over, and when I later researched this shelter, I discovered that the Big Pond Shelter was moved to the present location of the Laurel Creek Shelter way back in 1988! So these signs are clearly over 25 years old, and they definitely look it.  I thought the first one I came across was bad, but the sign at the junction with the Johns Creek Mountain Trail is nearly unreadable!

Once at the top of John's Creek Mountain, 16 miles into my hike, I knew I had passed the last tough mile.  It was level for another 1.5 miles, then steeply downhill with only a few uphill portions, almost all the way to State Route 42.

The last mile of this was through rolling fields in increasing darkness.  And, just before 42, was a flowing stream in the grass, ankle deep, that successfully soaked both of my feet.  No time to go barefoot!

I crossed 42 and then cruised the last 3/4 mile through fields, allowing me to see the trail despite increasing darkness.  When I reached a stone covered trail in a forested section, it was time to fish around in my backpack for a headlamp.

It turns out, I spent more time finding the headlamp than using it, as I was only 100 yards from the road where I was parked.

I would not rate this as an exciting hike, but I was moving so fast that I failed to stop at either of the major overlooks - Wind Rock and Kelly Knob.  I might feel differently if I broke this hike into two parts.

The longest part of the trail seemed to me to be the section between the Laurel Creek Shelter and Rt. 42.  I was concerned about light, and it was near the end of the hike, which no doubt contributed.

Below are the numbers for the entire hike, first with a GPS screen shot taken at the end of my hike. Interestingly, the computer program (shown below that) generates slightly different numbers, and I am not sure the cause of the discrepancy.


Be sure to check out other posts at Wandering Virginia.
Posted by Jeff M at 5:31 PM 2 comments: