The weather forecasters told me that Friday, July 10 would present the best weather day of a questionable weather week, with only a "passing thunderstorm" in the forecast.  I hate July’s typical daily Central Virginia forecast: "highs in the 90s and humid, with a 40% chance of afternoon storms." In other words, "we don’t really know what’s going to happen, except that it won’t be comfortable."

I was on the road by 6AM with breakfast in hand and Gracie the Fabulous Hiking Dog in back, intent on a bucket list hike that required everything to work perfectly.  Three hours on the road, four hours on the trail, then three hours return would allow me to achieve my first ever hike in West Virginia’s Cranberry Wilderness and be back before 5 PM.

I made it to the trailhead by about 9, arriving at a point where there was literally a hole in the forest with a trail going in.  I had driven from sunny skies into the clouds as I climbed up into the Cranberry area. The Cranberry forest was so thick that it looked like a curtain covered the forest, and I entered into an opening.
Whenever I researched the Cranberry Wilderness in the past, I would come across descriptions of the area as having vegetation unlike the rest of the Mid-Atlantic and more like the Adirondacks or New Hampshire’s White Mountains.  I discounted such accounts, but was amazed when I started hiking here – it reminded me exactly of hiking at lower elevations of the White Mountains.  The forest looked just the same!  Unfortunately the skies started opening up and I was brushing my way through wet Red Cedar and magnolia.  I was wet immediately at the start of my hike, and it wasn’t worth donning my rain gear.  This also reminded me of the Whites – one very wet week in particular hiking from Franconia Notch to Mt. Washington.
The North-South Trail in Cranberry Wilderness seems to be one of the favorite trails in this large wilderness.  I decided to take this trail from the Highlands Scenic Road to the Tumbling Rock Trail, then back. The trail sign told me that this would be 5 miles each way.  My GPS ended up totaling a little longer – 10.7 miles for the hike.  My experience in West Virginia is that trails are seldom kept up, especially in wilderness areas.  There just aren't enough volunteers out this way.  So picking a major trail meant that I was less likely to find myself on a nonexistent path.

Despite its relative popularity, the North-South Trail was still seriously overgrown.  I was pushing myself through heavy brush almost from the start, then the trail would open up for a while and dry out, then I would be back in the heavy brush.  The trail itself was dry some of the time, but much of the trail was worn into a channel, spawning a series of pools, brown from tannin off of the trees, ankle deep.  And on the return trip, in a driving rain, the water was deeper than on the way out. 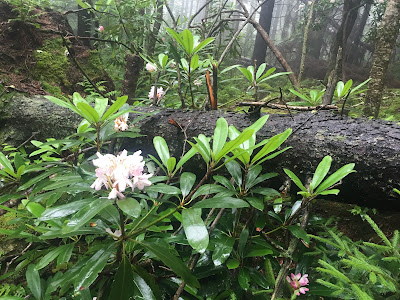 There were no vistas on this hike, but that didn’t keep it from being a wondrous place to visit.  Green was everywhere and the views changed constantly.  I can see why this is a popular place to backpack - I barely scratched the surface of this place - but backpackers need to be prepared for wet conditions.
Posted by Jeff M at 10:18 AM No comments:

An early start on Sunday, July 5th eventually brought me to 3 different wilderness areas in one day, as I continue to add to my totals for the year as part of the Dirty Dozen Wilderness Hike Challenge. Total mileages hiked, 12.0 miles. Total miles driven, 317 miles.

Brush Mountain Wilderness
A pre-dawn rising had me arriving at Caldwell Fields in the Jefferson National Forest at 8:15 on July 5th, 3 hours and 165 miles from home. Early sunrises are great! 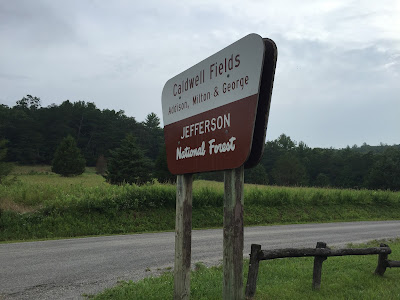 I parked at Caldwell Fields, on the edge of the Brush Mountain Wilderness, a relatively new wilderness (2009) that is one of the smaller wilderness tracts in Virginia – at 4707 acres, it is the 16th largest of the 24 Virginia wilderness areas. It is very close to the Virginia Tech campus.

Descriptions of this wilderness I had found online indicated that the slopes of Brush Mountain are very steep and rugged, and there are no trails inside the wilderness boundaries.  July is probably not the best time of year to visit a Virginia wilderness without trails, as the undergrowth could be thick and prickly, but I had never before visited this wilderness, so it was worth a shot.  Without any trails, there isn't a trailhead for hikers into the wilderness.  I figured Caldwell Fields was the best access point.

Caldwell Fields is a recreation area in the Jefferson National Forest and is an unsettling place to visit. Back in August, 2009, two Virginia Tech students were murdered there. They were high school sweethearts, found the next day by a guy walking his dog. The murder has never been solved.  Link.  Caldwell Fields has a picnic area with one table, and a couple of group campsites. There is a privy next to one of the campsites.

I waded through high wet grass in the field down slope from the parking area and ducked into the forest before coming upon a stream with wilderness boundary signs on the other side.  I was already soaked at this point! Once under forest cover and inside the wilderness, however, the going was much easier. I headed south over flat ground and passed  several small campsites in the woods.

Beyond those campsites was a 100 foot cliff. Eyeing the cliff, I saw an area that I could climb. Figuring I could have a nice view at the top, I scaled the steep ascent, switchbacking where I could in order to keep my ascent at a barely manageable 42% grade. On the top of the ridge, I got that view and more. At the top was a hunter or game trail. I figured I would follow the trail until it petered out or until the terrain became too steep to continue. The mountain never became as steep as my initial encounter, with the upper half averaging a 27% grade. I followed that trail all the way to the top of the mountain and crossed the southern boundary of the wilderness, coming out on an old woods road along the mountain crest. Along the way, I spied several shotgun shell casings, a couple of water bottles, and a deflated Mylar balloon – all evidence that I hadn’t completely escaped the civilized world. 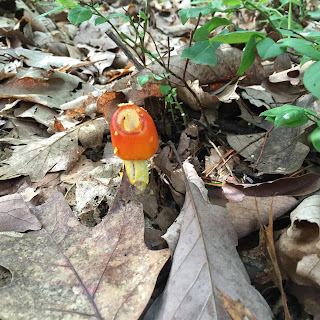 After wandering a little ways down the woods road, I returned to the same trail, taking that back to my car. Though I was feeling pretty good about myself for crossing a wilderness area with no established trails, I did not want to risk hiking a different ridge and finding a cliff that I couldn’t descend. The hike was only 2.8 miles total in the wilderness, as this trail went straight up the mountain. But there was great satisfaction in crossing the entire wilderness without the benefit of an established trail. I won’t be back to finish the entire 10 miles for this challenge – there is too little time and too many other places to explore – but I count this wilderness as one my bigger accomplishments in the challenge.

I continued on the woods road to the Audie Murphy Monument. Though located just outside the wilderness, it seemed un-American to be hiking on Independence Day weekend and not stop to honor one of America’s great heroes, at a site near where he crashed his plane ending his life, back in 1971.
On the way back, I stopped and talked with a small group of teenage hikers and their guides. They were from a camp called "Wilderness Adventure at Eagle Landing" and were nearing the end of a 4 day backpacking trip that had taken them past Dragon's Tooth, among several landmarks. I was impressed with the group, and the smiles on the boys' faces. Maybe I need to push my scouts for longer trips.

Near the end of this hike, just outside of the wilderness on my way back to the car, I came across an interesting problem. On the longest of a series of bridges crossing Craig Creek, in the middle, was a large black snake enjoying some sun. Black snakes aren’t poisonous. In fact, they are beneficial by controlling rodent populations. But I didn’t think I could reason with Gracie the Fabulous Hiking Dog on this point. I leashed GTFHD tightly and kept the snake away with hiking sticks as we carefully crossed the bridge. I am not sure that GTFHD knew why I was suddenly holding her tight, or why I breathed a sigh of relief after crossing. But this wasn’t the last bridge issue I would experience this day.
My original plan was to ascend the mountain on the A.T. heading northbound, visit the memorial on the top of the mountain, descend back down the mountain on the same route, then drive north to the next road crossing and reenter the wilderness to complete my 10 miles hiking southbound. (Every wilderness under the challenge should have 10 miles hiked, and, though others claim it as "wilderness miles" under this challenge, walking on the ridge road is outside the wilderness boundary.) But plans don’t always turn out. After completing the southern portion, I drove to the northern parking area only to discover that I would have to either ford a stream in my car or drive over the stream on a rickety bridge with a sign saying “Private Bridge.” There was a really terrible worst case scenario getting to the northern trailhead, one that I chose not to risk. 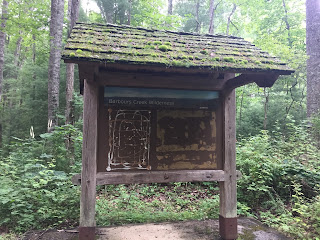 So I negotiated a series of back roads to find myself at the Lipes Branch Trail’s parking lot trailhead. Fortunately it was signed at the road and there was an information kiosk in the parking lot – though all the information had been stripped off of the kiosk. Heading up the trail, there was a new wilderness sign (shown above), but the trouble began soon after. I had brought a pair of loppers with me, just in case. They were in use right away to cut back on overgrowth. But after only 1/10th of a mile, the trail was totally overrun by a tsunami of Stinging Nettle. Stinging Nettle thrives in wet areas and grows to shoulder length by this point in July. My loppers weren’t going to help me get through that, and I have lost enough wars with Stinging Nettle on hikes in the past to know that continuing forward would not be a lot of fun. So even though I know that the trail would leave the nettle once it starts ascending the mountain, a sea of nettle had me turn around.

This is a wilderness area to be explored at another time, after the frost slays the evil nettles.  I will put this on my list for winter hiking but will not return here as a part of the Wilderness challenge.  Ironic – my hikes this day included several miles through a trail-less wilderness, but only 1000 feet in another wilderness on an established trail.

Near the trailhead is a remote campground called The Pines.  I drove the loops to the campsites, hoping that a side trail to the Lipes Branch Trail might present itself. No luck. The Pines had 4 campers scattered among its 10 spots. The campground itself looked pretty tired - it is clear that Jefferson National Forest is not putting much investment into this property. It is really remote! But it has a couple of privies and some garbage cans. There is a pump for water. And each site has a picnic table. There is no charge with this campground. 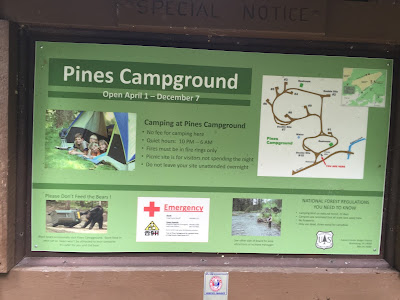