The Hardest Dayhike in Virginia

A while back Backpacker Magazine published an article on "America's Hardest Dayhikes."  Link.  It is important to note that the article was written by Backpacker's "Northwest Editor," which begs the question, "what does he know about eastern hikes?"

Nevertheless, it is an interesting list, despite being ridiculous in many ways.  How, for example, can a 41 mile hike be called a "dayhike"?  He gives top honors to a hike in his region (naturally) that is that long, even though his #2 gains half again as many feet in elevation over nine fewer miles.  And, having done a part of the #2 hike (New Hampshire's "Pemi Loop" over Mt. Garfield, Mt. Lafayette, and South Twin Mountain) over two days, I can personally vouch for the extreme difficulty of this hike.  At one point, I swear I was hiking down an actual waterfall.  Check out the elevation changes and steepness of this trail, below.

No Virginia hike is listed.  Is there a Virginia hike that matches any of the 10 hikes listed?  If not, what is the hardest day hike in the state?  My vote would go to the Wild Oak Trail west of Staunton, as it comes close in numbers to the listed trails, at gains just a foot under 8700 feet elevation over 27.4 miles.  I have done it as a dayhike each of the past two Springs (once in each direction), and each time I swear never to do something that stupid again!  Link.  You simply cannot avoid steep ascents in either direction around the 15 mile mark, and it leaves you worn out for the rest of the hike.
Posted by Jeff M at 3:11 PM No comments:

The Whetstone Ridge Trail starts on the Blue Ridge Parkway, not far from where Virginia State Route 56 crosses the parkway on its way to Spy Rock and Crabtree Falls. Allen DeHart's book, The Trails of Virginia, states that this is the longest trail in the Pedlar District of George Washington National Forest. Because it is over 10 miles long, an out and back hike has never seemed feasible, so I always kept an eye out for Potomac Appalachian Trail Club hikes heading out to that trail.

Instead, I ended up signing up for a scheduled hike with the Roanoke Appalachian Trail Club when they listed it.  I joined the RATC at the beginning of the year and have hiked often with them this year as I extended my continuous mileage on the A.T. in Virginia from around 200 miles at the beginning of this year to about 350 miles now.  The Whetstone Ridge Trail is the northernmost hike I have done with them, and it didn't make sense to drive south to Roanoke then back north to the trailhead.  So I arranged to meet the group at the southern end of the trail, where our hike would end.

The RATC folks met up in Roanoke at 8AM and said they would be on the trail by 9, so I figured that must mean they would be near the end of the hike by 8:30.  I left home at 7:15 and was at the trailhead by 8:20.  I made sure I knew exactly where the trailhead was as I'd never been on the road before.  I entered waypoints in my GPS telling me where to go, from Exit 200 on Interstate 81, to U.S. 11, to Red Hill Road, to South River Road, to Irish Creek Road, to the trailhead parking lot.  No problems getting there.

I had extra time, so I looked around a little.  Although there was no trailhead sign, the parking area was large, there was a clear trail heading uphill across the road, and that trail was marked by a large plastic yellow diamond on one of the trees.  So I waited.  And waited. 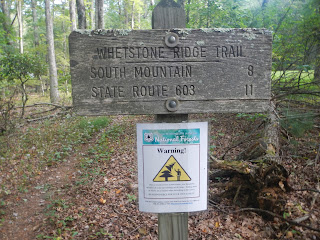 Finally about 45 minutes later a pickup closely followed by a car drove by.  It was the first caravan the entire time.  The pickup had an AT sticker.  It must be them, and they must have missed the turnoff.  They will be right back.  But nobody showed, and I was deep into the map determining a Plan B hike when the pickup came back my way.  It was Dan, the group leader, saying that the trailhead had moved and I was in the wrong spot.  Yeah, despite the yellow diamond on the tree.

We were fortunate that Dan had scouted the trail when he stepped forward to lead the hike, as he was right about the trailhead. I followed him 2.5 miles up Irish Creek Road, to a much smaller parking lot that had a brown hiker sign and a trail into the trees.

I joined a couple of other folks in the back of a covered pickup and 20 nausea-induced minutes later, seven of us found ourselves at the Whetstone Ridge Visitor's Center on the Blue Ridge Parkway.  Big parking lot. Flush toilets (in season).  We were on the trail by 10, heading north by northeast.  Not exactly the direction I expected, since we had come up from the southwest!  But we soon took a sharp left and walked along a ridge for several miles.

The trail generally followed an old road, though it often broke away to parallel the road - sometimes only for a couple hundred yards before rejoining the road.  Since the trails were clearly not built to stem erosion on the road (it was not rutted), I concluded that they were built by mountain bikers to provide a level of adventure an old woods road cannot give.   Eventually the road faded away and we were on a rocky trail on the crest of Whetstone Ridge, with very little elevation change between miles 2 and 4.  After mile 4, we dropped off the ridge and moved over to South Mountain, which was really a series of steep ups and downs, with a few nice views thrown in.  There were six of these mini peaks in all, with some steeper and longer than others.  We nearly skated down one slope in loose debris, dirt and rocks.  And by this time, the trail was often very overgrown.
The trail goes near Adams Peak, with limestone rocks jutting out of its northern face.  Adams Peak provides a good goal for a return trip - it looks like views from the top of that peak would be spectacular.  And it would not be a tough bushwack from the trail, which rides a ridge very close to the peak.
The trail also passed right next to a wildlife blind before coming to a sign telling us to take a sharp left to start down the slope.  This is where the new trail alignment left the trail found on all my maps.  Other than the sign, though, there was no barrier to indicate that the old trail has been superseded, and a downed tree had been freshly cut.  I think the old trail is still used, probably also by mountain bikers.  So I am going to guess the new trail was built by the same group.  It had a very steady descent, and is probably a much easier ride than the older trail.  The new trail was actually very pretty, descending next to a couple of stream cuts in the mountain.  Parts of the new trail had stone walls built up the slope to keep the trail at an even grade - very nicely done.
Overall, I found this to be a tough trail, and I remain sore two days later.  Hiking it in the opposite direction would be really tough!  (Though it would provide a way to do this hike solo - if you hide a bike near the Whetstone Ridge Visitor's Center and start the hike from the south - you can roll back down to your car.)  We ran into one other hiker - a guy with an old external frame backpack who said he was tenting along the trail and out giving his Garmin GPSMap 62s its initial workout.  I showed him that I had the same model and advised him to stick with it - understanding its capabilities takes time!  I don't think the trail sees a lot of use, except maybe by mountain bikers and hunters in season.  Fortunately, the slopes appear to stay pretty dry. There are no road crossings or exit points on the trail, so if you are on your own you better not get hurt. Much of the trail goes through an area the US Forest Service calls the "Mt. Adams Roadless Area."  This is some pretty remote forest - among the more remote areas east of Interstate 81.