This posting is part of my effort to document trails in the North River District of the George Washington National Forest that don't have much in the way of online descriptions. Like much of the North River District north of US 33, this trailhead is tough to find and involves a long drive over difficult Forest Service roads.  Don't be coming up here in your Miata!  To give some perspective, the 37 miles from the US 33/I-81 intersection in Harrisburg (via the town of Broadway) took me an hour-and-a-quarter. 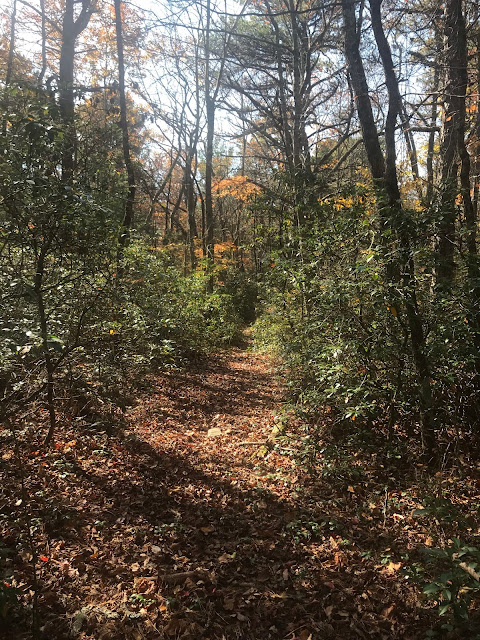 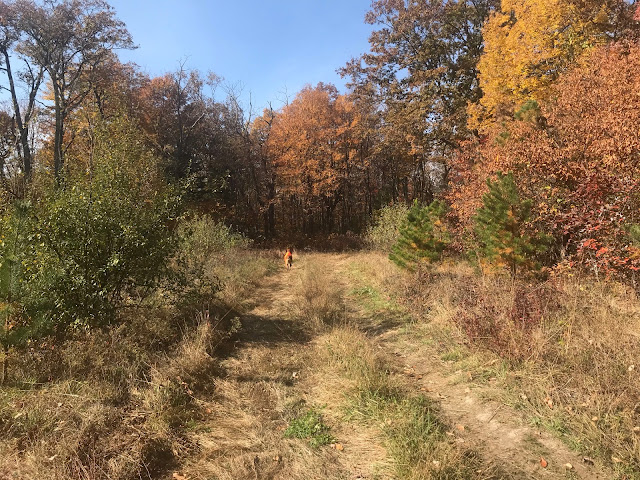 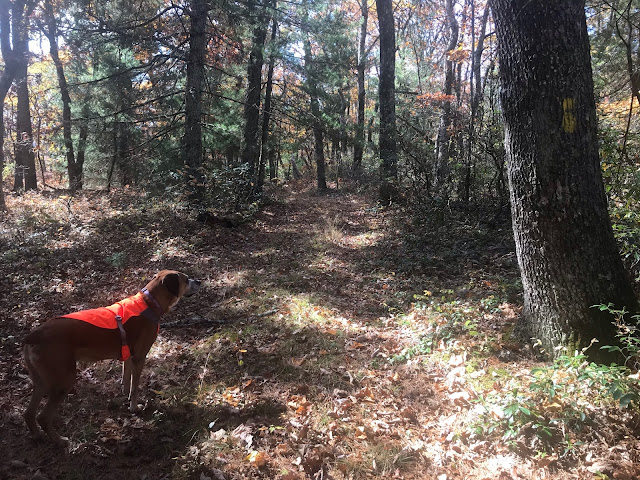 I am not sure that the Rader Mtn Trail even exists anymore.  I only know about it because I've come across a list of trails in the North River Ranger District, which oversees the area that includes the trail.  But the list is old (even though I picked up a copy this Summer), and I know at least one trail on the list was decommissioned nine or ten years ago.  It is not found on my copy of the Trails Illustrated Shenandoah Mountain map, which has a copyright of 2001.  It is not listed in my bible, The Trails of Virginia: Hiking the Old Dominion, 2nd Edition, copyright 1995.  And its southern end passes into private property, which the USFS seems to decommission to avoid issues with landowners. 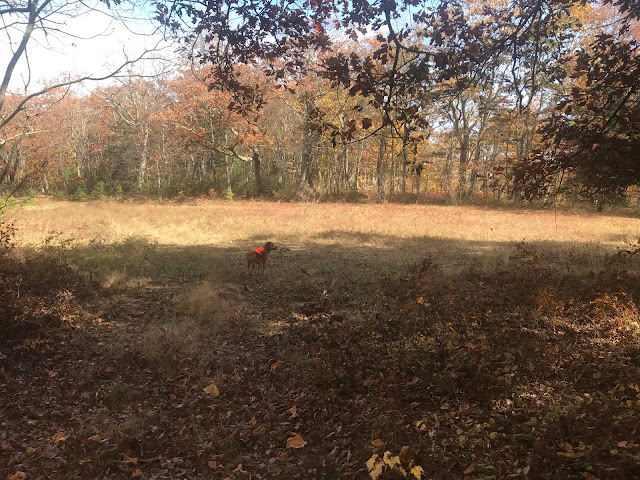 So I didn't head out with high hopes, but figured that if it is still visible, I'd check it out.  I parked where the Radar Mtn Road meets the main road, which at this point is called Hall Springs Road, nearly within spitting distance of the West Virginia state line.   (GPS: N38° 39.341' W79° 06.150')

I parked on the main road because, even though the gate was open (the Rader Mtn Road is open September 1 through December 31 each year), the road looked rough and there were multiple puddles in view from the main road.  I didn't want to risk needing a tow in an area where I could not get a cell signal!

So the first 2.5 miles of the hike was on the road.  But the road was occasionally blazed with yellow plastic diamonds and there was no traffic.  (In fact, I saw no one for the entire time I was off pavement this day, on a beautiful Tuesday in late October.)  It passed multiple open fields that are no doubt maintained as a wildlife attractant.  And the road dropped in elevation at an almost imperceptible rate. (The trailhead is the high point of this hike.) 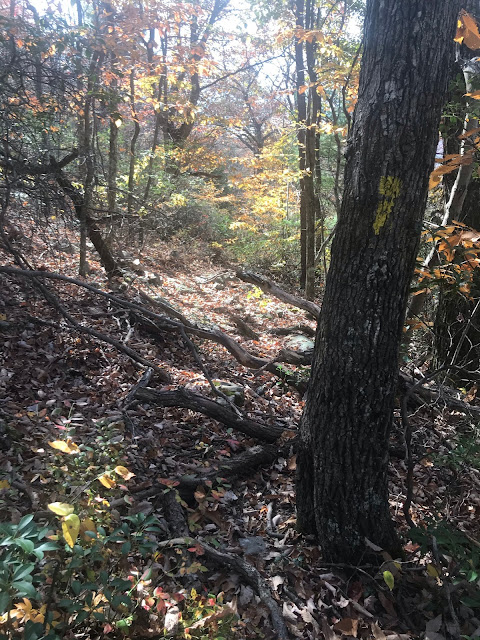 At about the 2.5 mile mark, the road ends in a large field.  Trees are blazed indicating where the trail continues, and multiple national forest signs signal that no vehicles should continue.  For a while, the trail continues straight and wide, making me think that it may have also once been a road.  The trail itself has been around a long time, as I found it shown on USGS topographic maps dating back to 1947, however even the most recent topos show the entire route as a trail, without any being listed as a road.

At about the 3.25 mile mark the trail has narrowed to a legitimate trail and it hugs the side of the ridge on its way steeply down.  The last 0.6 miles that I hiked the trail dropped 440 feet, at an average grade of 13.5%.  I reached a point where I would drop very fast over a trail that was now composed of loose rocks, so I turned around - knowing getting hurt here would make for a difficult return and not knowing when I was going to reach private property.  There's no cell service, so I hope to return when I have a friend or a satellite communication device. 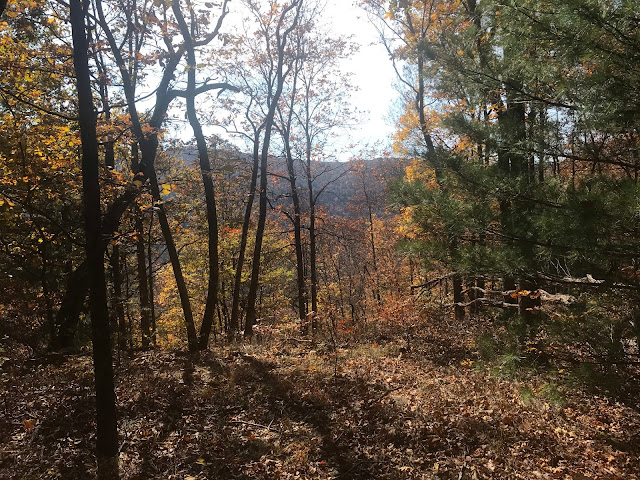 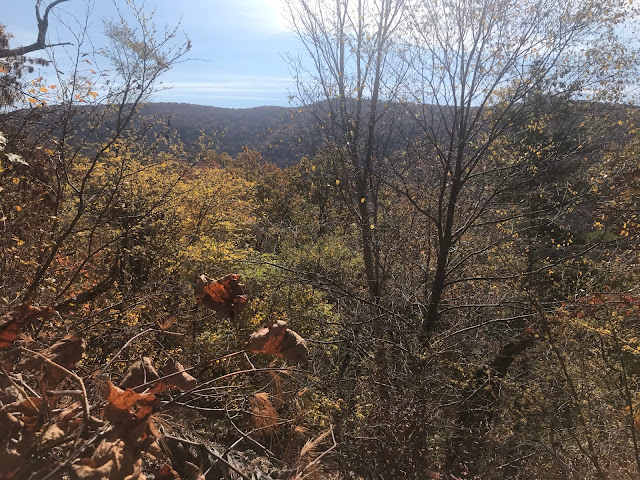 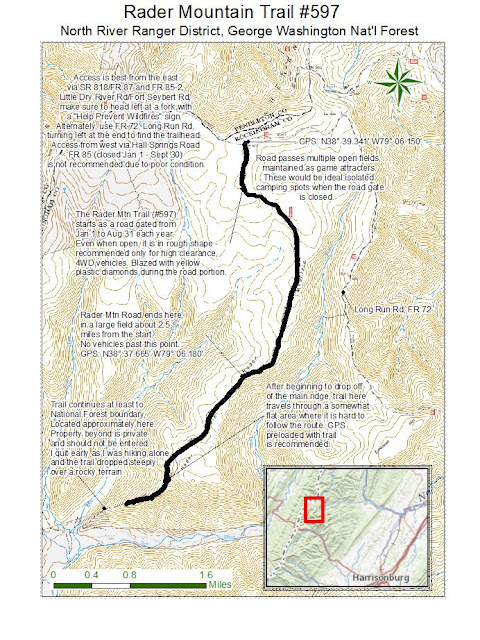