Day 4 of our 2021 Grand Canyon Rim-to-Rim-to-Rim was my toughest day of hiking.  It really was two separate hikes.  The first was from Cottonwood Campground, halfway up the North Rim to Phantom Ranch on the Colorado River.  It was slowly downhill over 7+ miles.  Then, after stopping at Phantom Ranch for lemonade, we climbed up the Bright Angel Trail to Indian Garden Campground for our final night in the Canyon. 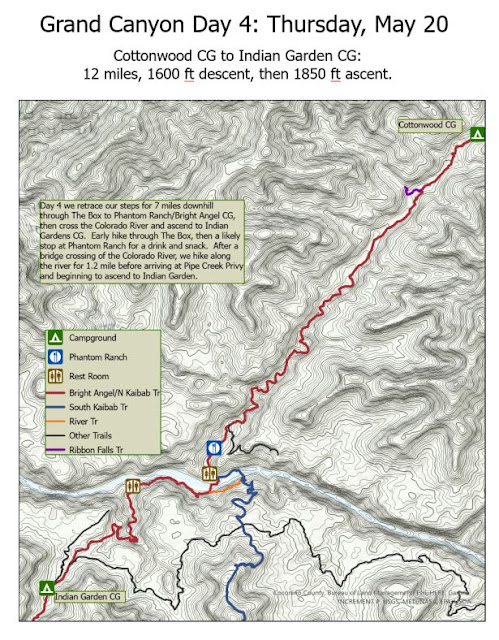 An early start meant that the the hike to Phantom Ranch was shaded and cool.  I enjoyed this section just as much the second time as I had two days earlier when I first experienced it. 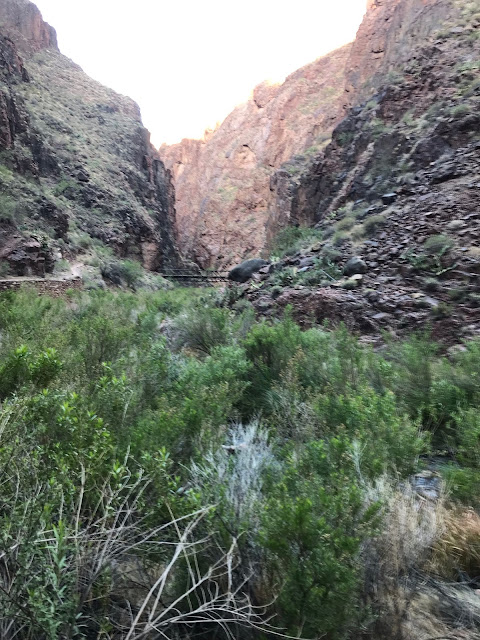 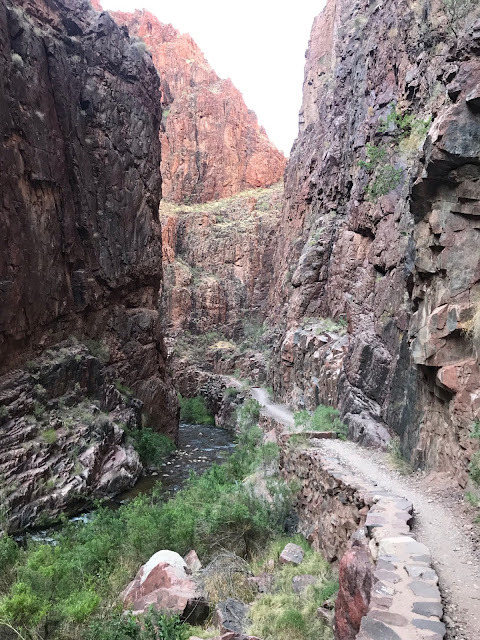 We left camp at 6:40AM, about an hour after sunrise.  It took us 2.5 hours to get to Phantom Ranch, plus about 10 minutes stopped time.  We stayed at Phantom Ranch for about a half hour, then put the packs back on to finish the day's journey.
After Phantom, the next couple of miles is relatively level.  We crossed the Colorado on a steel pedestrian bridge, and paralleled the river until we reached a side canyon with some privies.  The trail along the Colorado was different than any of the trail we had experienced before.  That is something that always surprises me about the Grand Canyon - there are so many different experiences along the way. 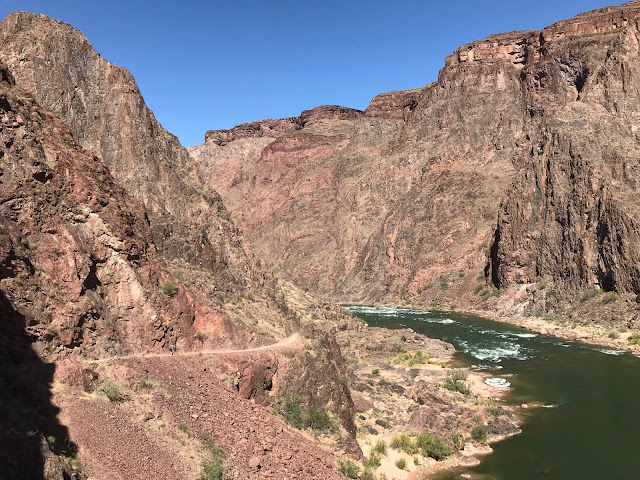 About 2 miles after crossing the river, we came to a canyon with a stream and a building with privies. The trail cut in there and started to climb.  Parts of the trail were relly steep for short sections - my data indicates a 41% grade for about 200 feet as part of the climb. 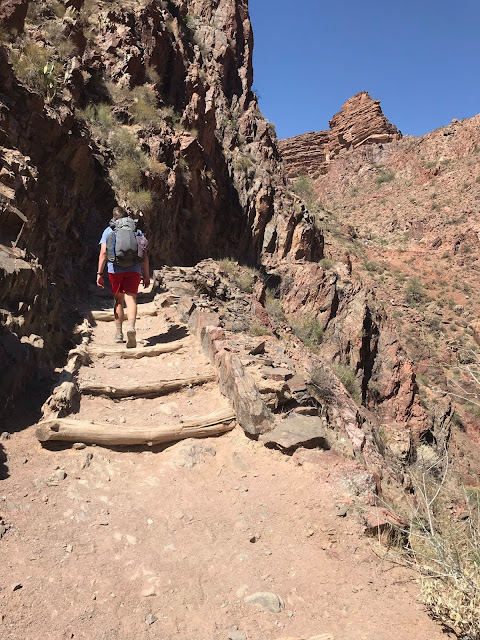 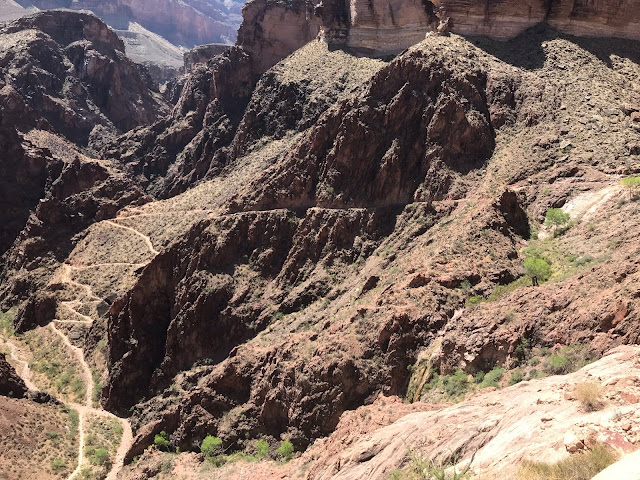 You can see from the photo above how exposed the trail was during this climb.
At higher elevations, the trail followed a canyon made by a stream bed.  Lots of birds and trees were in the stream bed below.  Eventually the stream bed rose up to meet the trail, and parts of the trail were pretty muddy from the stream crossing. 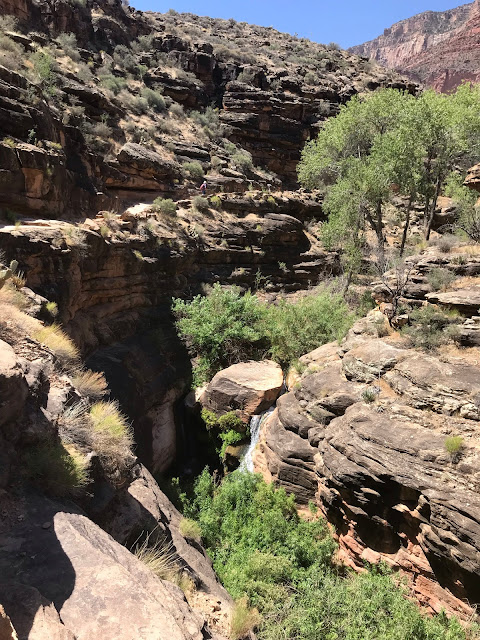 We all made it to the campground at different times.  The young hikers were first and picked out a campsite.  I arrived next and when I arrived, the young guys headed back down the trail to help Mike, while I watched the backpacks and started to set up camp.  Mike was most appreciative of the help, as the trail was even hotter when he made it to the top.
I set up my tent, but had to weigh it down with several large rocks as a wind started to pick up.  That wind never ended, and roared through camp all night - keeping us awake much more than any of us would have liked.  We were all pretty spent, and passed time for the rest of the day re-hydrating and playing multple hands of Hearts card games.  There are fewer photos during this portion of the hike compared with other days - I think it is because this was a tough slog. 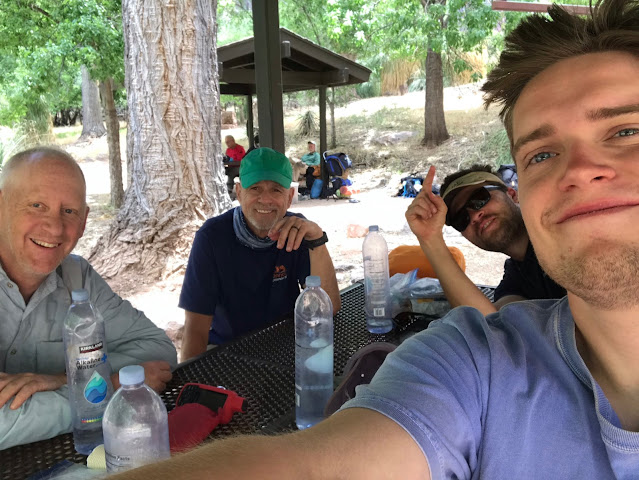 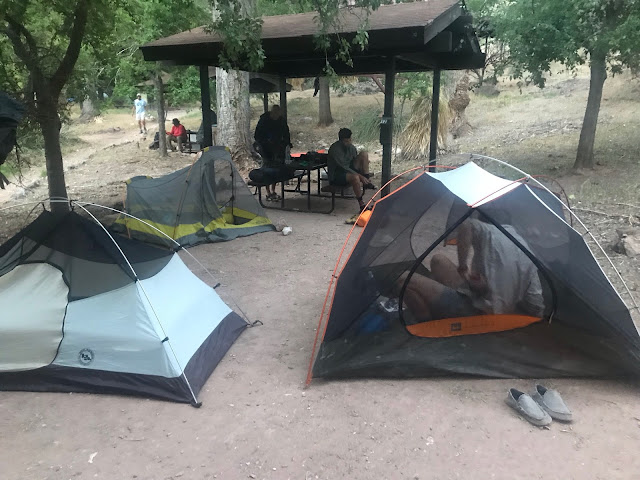 The Indian Garden Campground was much more active than Cottonwood had been, and I remembered bits and pieces from when I had camped here with Will eleven years earlier, shown below. 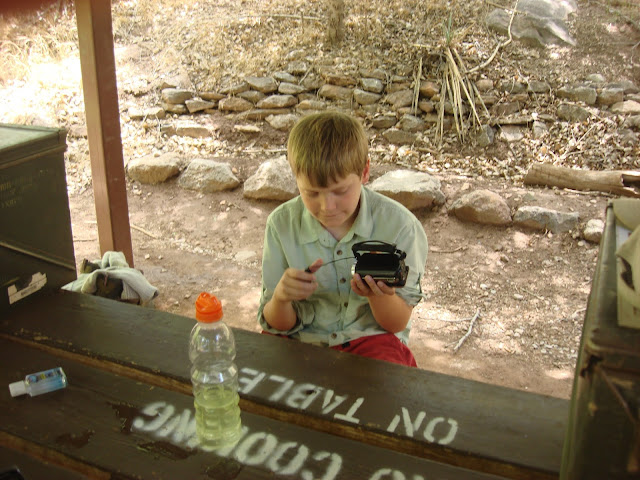