Day 3 was our longest hike and greatest climb, but we did it as a dayhike because we had permits for two nights at Cottonwood Campground.  We left our tents up and our extra food in the bear box, taking only what we would need that day.  And there were two water stations along the way, which meant that we did not need to load up on water.  They were not ideally located, however: one was about 1.5 miles from the start and the other 1.5 miles from the end of a 7+ mile hike each way. 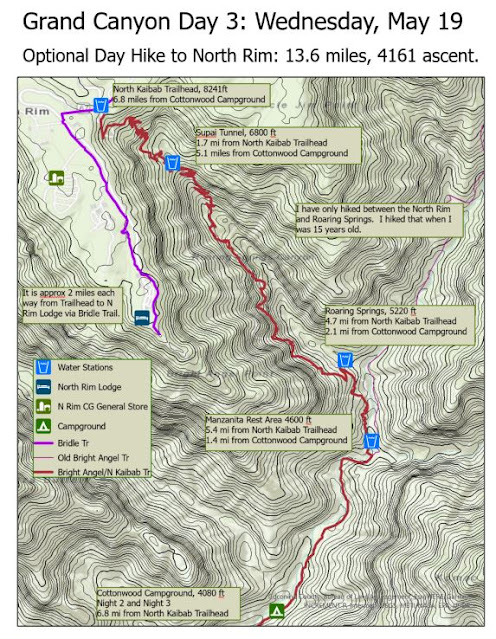 The map above is not totally accurate - the water at Roaring Springs was shut off.  But we knew this before we left and could work around that.  The first rest area, Manzanita, came up fast. The climb was pretty negligable and we were fresh that morning.  We stopped here to top off the water bottles, "camel up," and use the privy.  We passed the side trail to Roaring Springs at about the 2 mile mark. 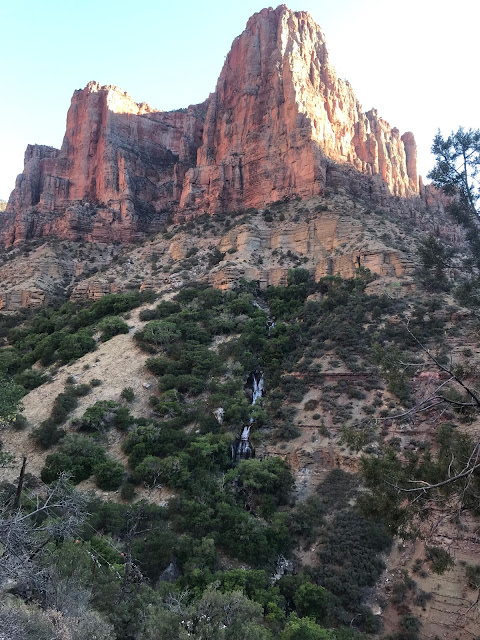 Roaring Springs is a sacred site to me, as I camped here with my high school group on July 4, 1974. (Unfortunately, I have no photos from that overnight.) I had not been back to this part of the Canyon since, and was excited to again experience a trail section I had completed as a teenager. We still had a climb of nearly 3500 feet ahead of us, over a five mile length, and I was glad that this time I was not carrying my tent and sleeping gear.  I hoped when passing here that I would have the energy on the way back down to hike the extra 0.6 miles to the old campsite, which is no longer maintained as a campsite by the NPS. 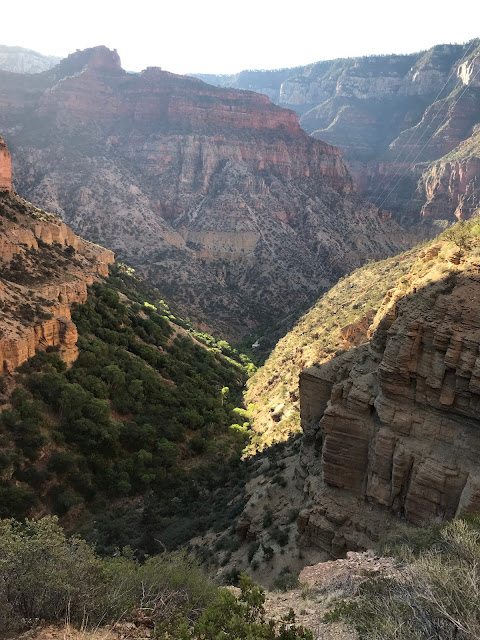 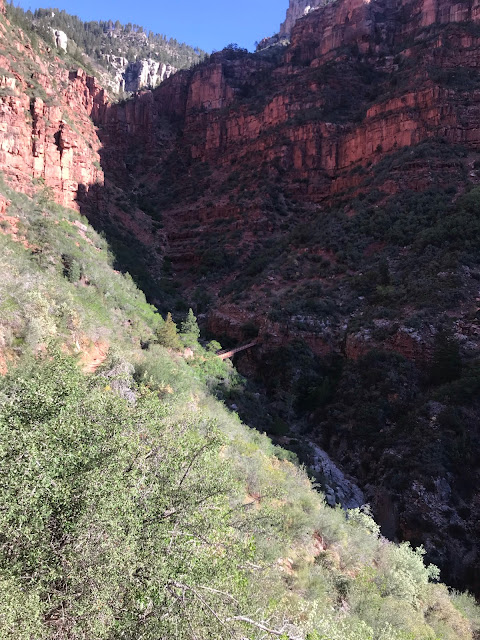 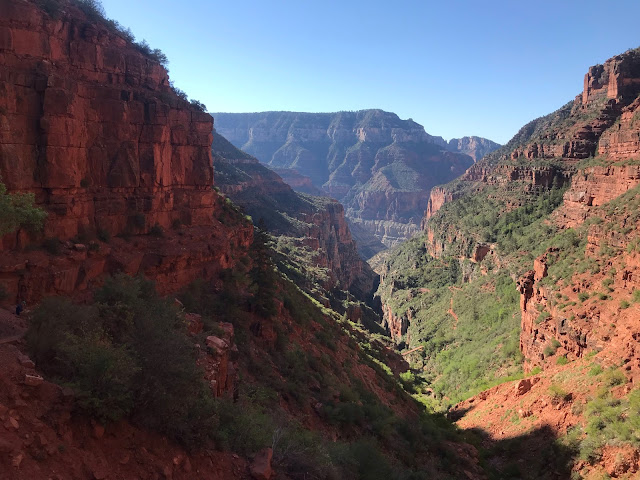 After Roaring Springs, my GPS went kind of off track - in the same places in both directions.  This is curious, because the canyon was more wide open than it had been the day before.  So my data in this area is not accurate.  Continuing to climb we crossed a bridge before taking on additional switchbacks.
We met the young hikers at Supai Tunnel, which had privies and water.  They were content sitting in the shade waiting for us, as shown in the photo above.
While I remember the tunnel from 1974, I do not remember available water or privies.
We started to see a lot of people on the trail at this point, most of whom had come down from the North Rim Trailhead, 1.5 trail miles ahead.  The remaining trail was hot and fairly steep, but we knew we were near the top and the views were spectacular. 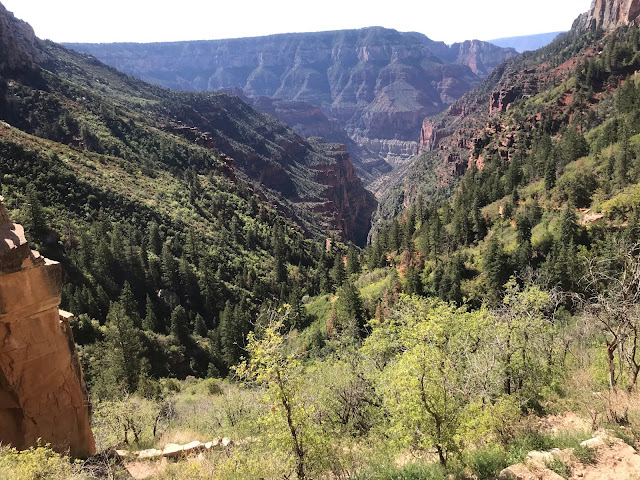 We celebrated at the top, taking our photos in front of the trail sign.  And we talked with a guy from Colorado who was at the trailhead filling up water bottles.  He ended up offering to take our packs and Mike to the Campground store, which was great! Will and Cole and I walked the 3/4 mile mostly flat trail and met them there.  We bought Gatoraids and sandwiches, along with a beer apiece to carry back to our campsite and chill in the nearby stream.  We ate lunch on the store's porch because there weren't any nearby tables. 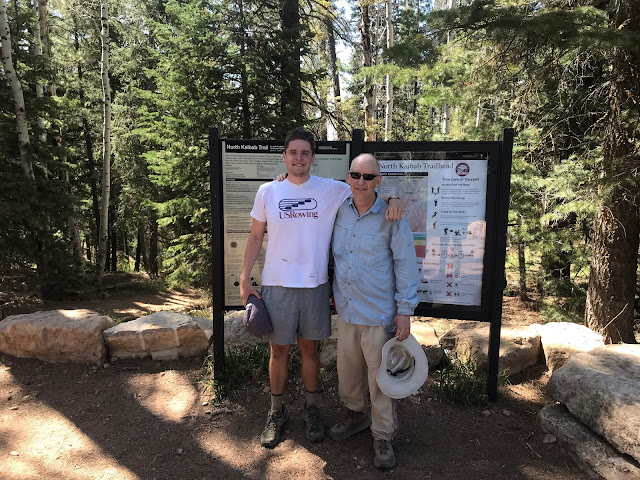 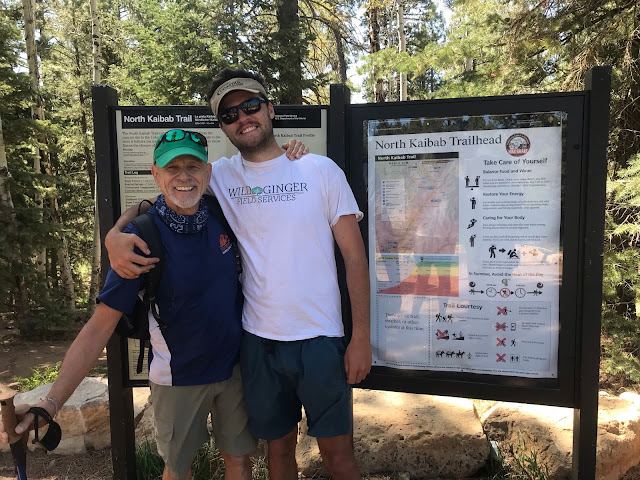 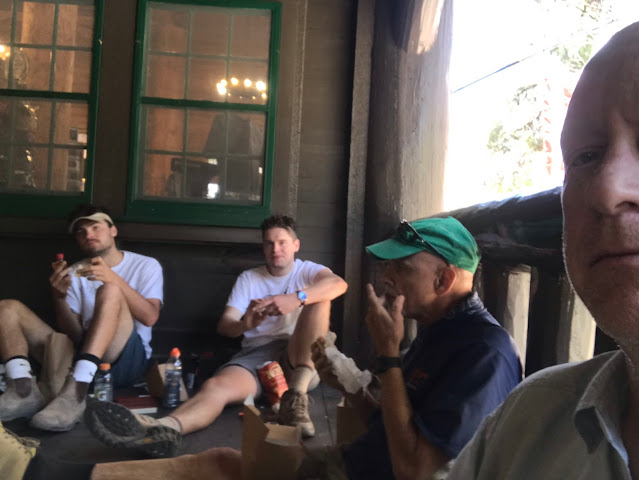 We hiked back to the trailhead and I texted my wife - there wasn't sufficient service to actually call.  Then we dropped down the trail to retrace our steps.
The views were just as wonderful on the return trip! 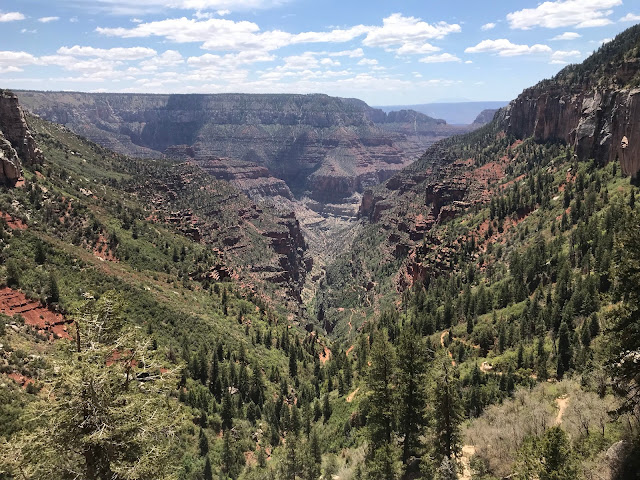 The young hikers met us again at Supai Tunnel, about 1.5 miles down the trail.  There, we met a young woman from Culpepper, Virginia, who was doing a R2R2R trail run with her husband.  "Where is your husband," I inquired.  "He ran to the top, but I'm waiting for him because I twisted my ankle," she replied.  Then she told me that they were together going to run back to the South Rim that day.  I do not know if they ever made it, but continuing to the North Rim and then hiring a shuttle to drive her back to the South Rim would have made more sense to me.
We also encountered several women ascending that we had met earlier.  The major character was a 70+ year old tiny woman who had fainted in the Cottonwood Campground the night before.  Her female companion called for help and eventually got most of the camp to help her.  They both wanted to continue that night, despite the utter lunacy of continuing another 7 miles and 4000 feet ascent after one of them passed out on the trail.  When we would ask the woman how she was feeling, her stock answer was "humiliated!"  I tried to convince her that we were interested in her physical, and not emotional state, but it was all about her ego.  (Not to mention her good fortune in passing out in the middle of the only campground over 14 trail miles.) Even the next day, when hiking out, she had little to say and was not at all appreciative of what had been done for her.
At Supai Tunnel, we told the young guys to hike back to camp at their pace and to make sure to get those beers into the stream so they would be nice and cold upon our arrival.  When we went through the tunnel, however, there was Cole - appearing to be getting ready to shotgun one of the beers!  Turned out that dropping his pack at Supai had created a pinhole in the beer can, and despite using Moleskin to attempt to plug the leak, that beer was going to be empty before camp.  So they shared it then, as shown in the photo below. 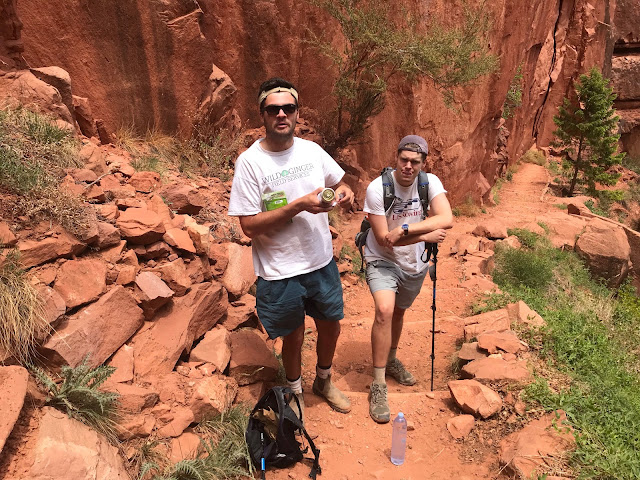 In the photo above, taken just after Supai Tunnel, you can see the young hikers and the bridge in the distance.  Many of the day hikers descended to the bridge and then returned, but one experienced hiker we ran into pointed out that the view is pretty similar from this photo point to the bridge, so the additional hiking really is not necessary to get the feel of this part of the trail.  We descended slower than the young guys, but still passed a backpacker that we had encountered at Supai on the way up.  He was headed to Cottonwood Campground and eventually made it - much slower than we had hiked.
And I did travel the side trail 0.6 miles to Roaring Springs - surprisingly encountering three other hikers on that short trip.  The trail was in rough shape and the privies were closed (though a ranger later told me he thinks that closure is just for 2020-21).  The area is sloped enough that I'm not sure where my group would have camped in 1974.  The only likely area is a small area once used as a mule rest. (Mules only go as far as Supai Tunnel at this point, so it has been unused for a while.)  Still, it was great to go back there and think about that night in my epic trip from so long ago.  Below are three views of Roaring Springs from my side hike. 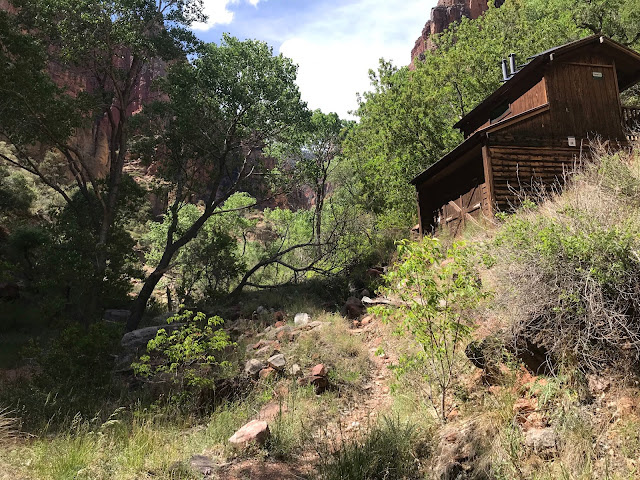 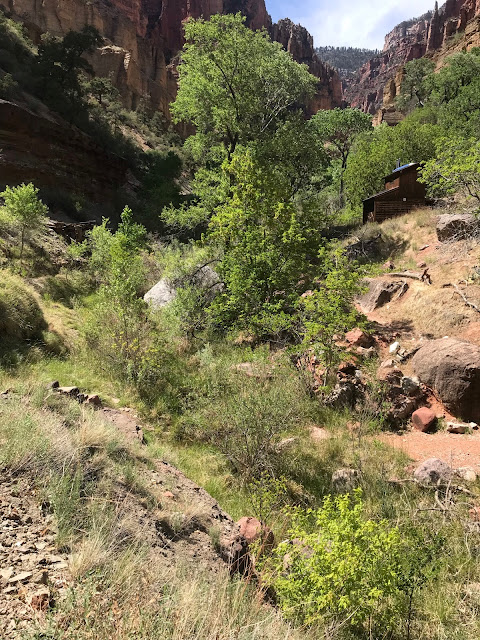 The rest of the trip back was uneventful, and we really enjoyed the cold beers when we returned!  We also spent some time in the Roaring Springs Creek, soaking our muscles in the cold water.
It was great to re-hike those miles from 1974 - they may have been my first ever backpacking miles as I don't remember ever actually backpacking in Boy Scouts in Illinois - Illinois does not present a lot of backpacking opportunities.  I am grateful for my original trip there and also for this year's return.