Our second day in the Canyon was also the easiest.  And, unlike the first day which followed trail that I had hiked at least once before (parts had been hiked 3 times), much of this day's hike was brand new to me.  We hiked north on the North Kaibab Trail from Phantom Ranch to the Cottonwood Campground.

The mileage on this day was longer, and the ascent was greater, but Day 1 featured a big descent and trail that was beaten up by mule use.  Mules do not currently use this trail north of Phantom Ranch at the very southern end of our journey. 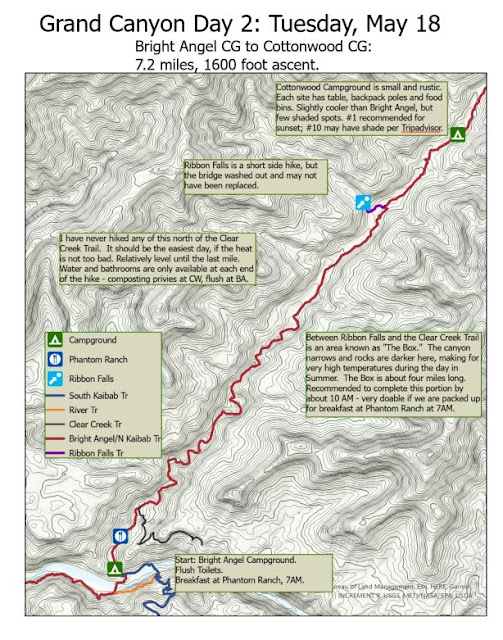 The key to this day's hike is to get through an area known as "The Box" early in the day, before the sun rises to the point that it heats up the dark rock towering over the trail - creating a very hot environment. That section is about 5 miles long and starts shortly after leaving Phantom Ranch.
We followed our plan, which was to pack up in advance of the 6:30 serving of our Phantom Ranch breakfast, carried our packs with us to breakfast, and head north from there just after breakfast was  over.
Day Two was exceptionally beautiful, but in a very different way than Day 1.  Whereas Day 1 featured expansive views of canyon over many miles of distance, Day 2 was through a tight canyon with high walls.  There were few distant views.  But the rocks were beautiful and the crowds were the smallest we would experience the entire trip. 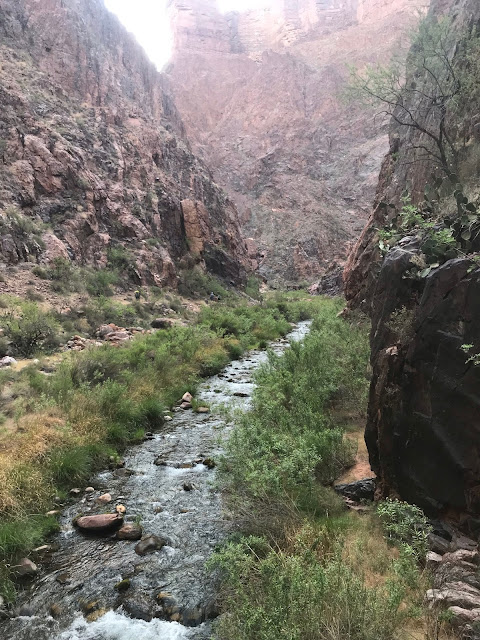 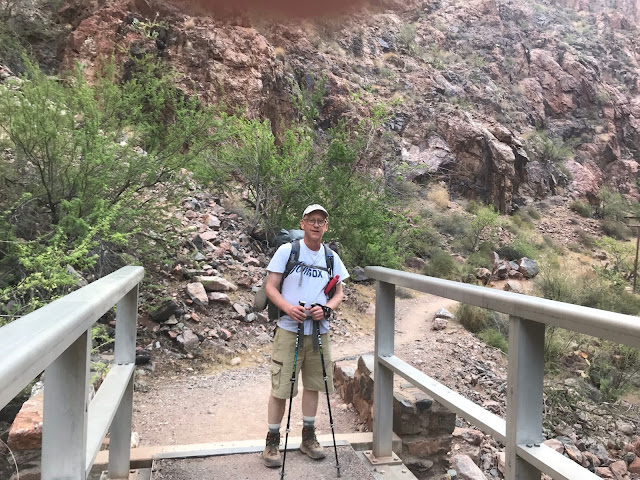 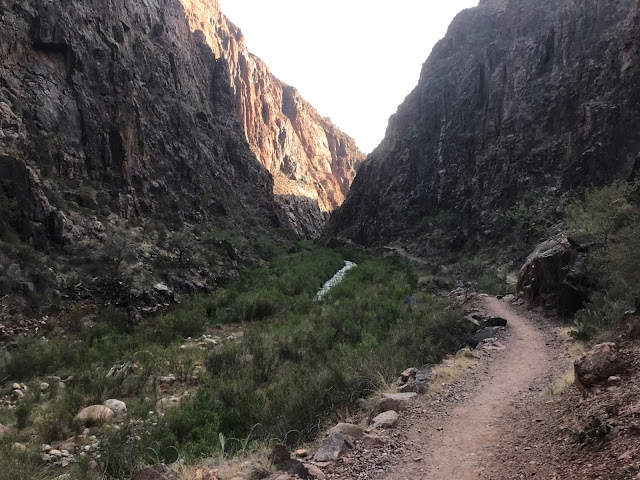 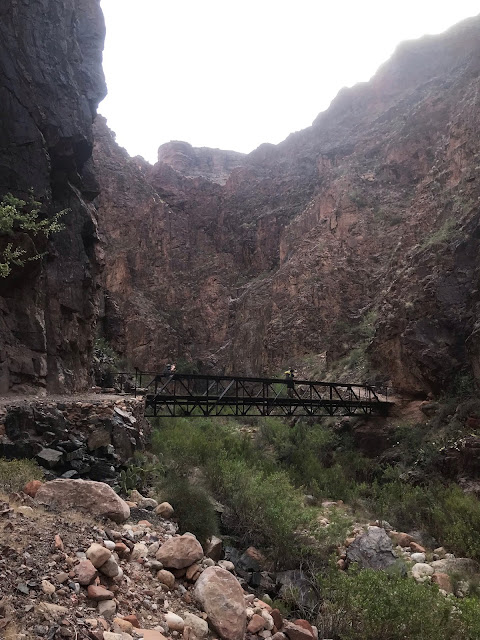 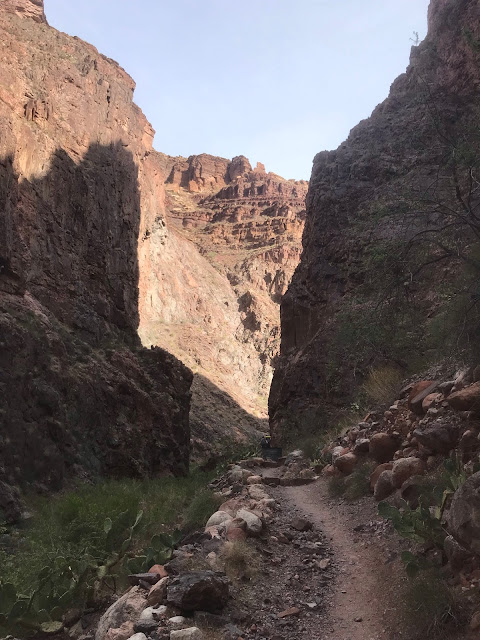 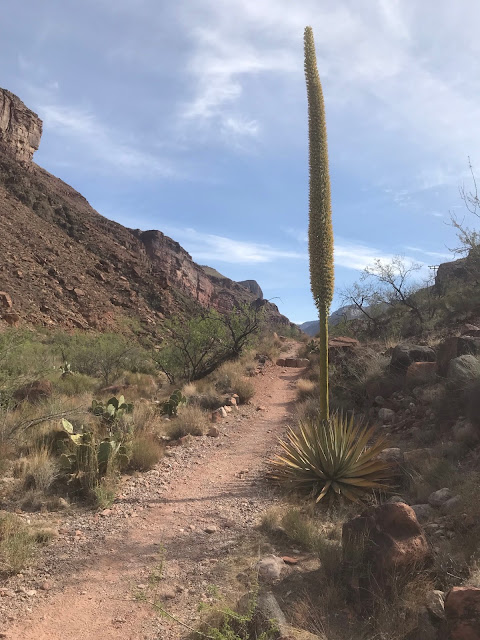 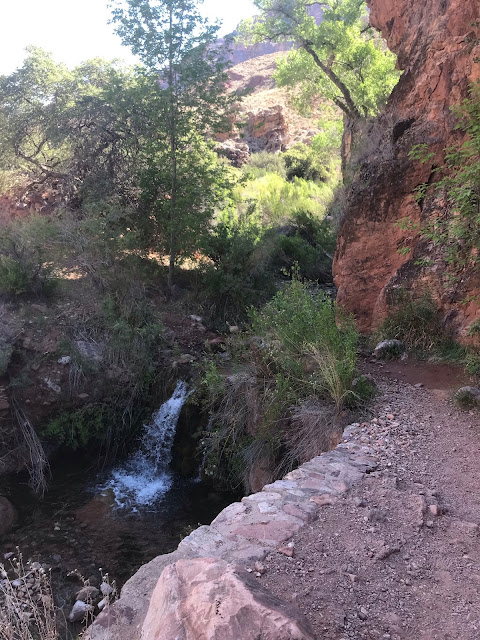 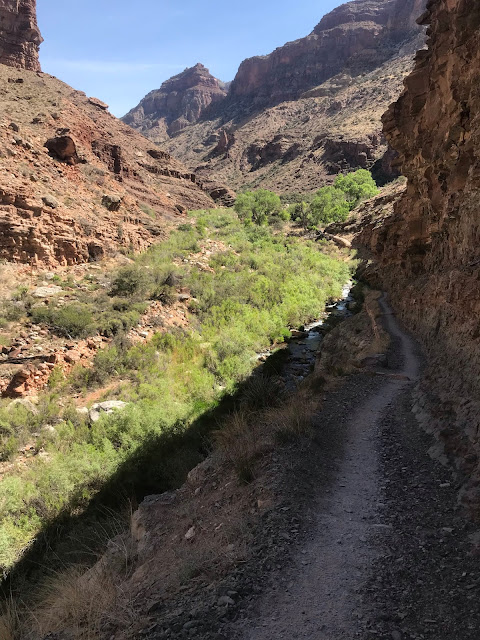 This was not a hard hike, even with full packs.  As a result, we reached the Cottonwood campsite that would be our home for two nights by 10AM.  The young hikers sped ahead and picked out Campsite #10, which is the only campsite with much shade during the day.  I referred to the Cottonwood Campground as "one good campsite and a bunch of crappy ones," though after the sun went down (it happens early in the Canyon), it didn't matter much whether the site had trees.  I think we got the best individual site,

There was only one other campsite taken when we arrived, though its occupants were not there.  By that night, every campsite except the group campsite was taken.  The group campsite was not used our first night and it was also a really nice site.  It was interesting to me because the itinerary of my high school group outing in 1974 originally listed Cottonwood as our destination, though we did not travel that far to camp overnight.

The campground also had a water spigot, privies, and an unmanned ranger station.  The North Kaibab Trail was closer to the sites than trails connecting any of the other campgrounds - we were five feet from the main trail.