I purchased a couple of UCO Claris LED Lanterns for backpacking use recently. 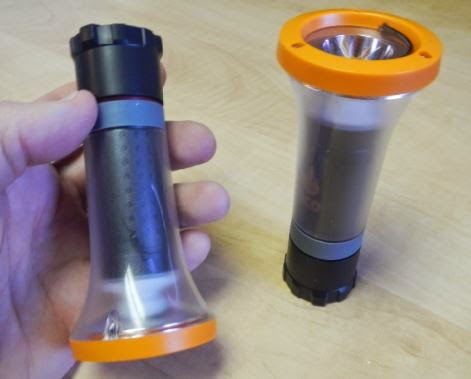 I really like this flashlight.  It pumps out an exceptionally strong beam for a small lamp - 150 lumens, and the plastic casing slides out to become a frosted globe lantern.  The flashlight has three settings: bright, dim, and strobe.  Using the dimming switch allows you to control the level of light.

The flashlight is pretty light at 3.8 ounces, which is lighter than the 4 ounces/112 grams the packaging states.  The lamp includes a metal ring for hanging the lantern using a clip. 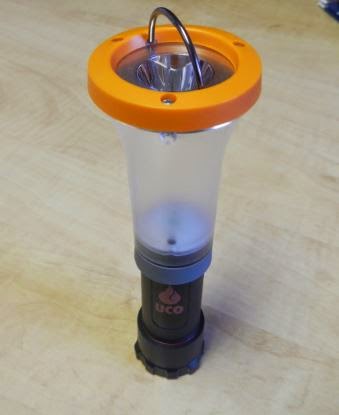 The flashlight takes 3 AAA batteries, which fit into a case that slides into the flashlight.  The packaging claims "up to 70 hours" run time, in the low setting.

The only issue I had with the flashlight was that one of the units came with a bad battery pack.  You put in batteries with the negative side on the spring and the positive on the contact, unless one battery compartment has no springs and another has two springs.  Finding the company online was difficult and they did not answer my email.  Finally, I tried calling the company and spoke directly to a person - no "Push 1 for Customer Service."  The woman I spoke with promised to send a replacement battery pack, which quickly arrived at my door.  If you need to call them, Industrial Revolution, Inc., which makes the flashlights, can be found at 888-297-6062.

I also received as gifts a couple of solar lanterns called "Luci Lux Inflatable Solar Lantern."  This is a plastic device that is inflated and gives off a nice amount of light.  It costs around $20 and weighs 3.4 ounces.  It is powered by a small set of solar panels.  Because it is inflated like a small beach ball, it floats on the water. This provides a surprisingly good light source, though nowhere near the beam the UCO Claris Lantern provides.  I like that it doesn't require batteries.  It will, however require some careful recharging, or you might find yourself without light after a day on the trail.

While neither lamp is one the ultralightweight backpacker is willing to take, I would not hesitate to take either on my next backpacking trip.  The days of flashlights powered by two or three heavy "D Cell" batteries is long gone.