The Rich Hole Wilderness is a federally designated wilderness area just off of Interstate 64 west of Lexington, created by Congress in 1988.  It lies just east of the Rough Mountain Wilderness, which I have visited several times even though Rough Mountain is much less accessible than Rich Hole. I had not hiked Rich Hole in several years, and had to abandon my plans to hike the trail when I last visited due to high water levels (Link).  (Tip - don't hike this during high water periods!) A warm January day in 2015 seemed like a good time to return. 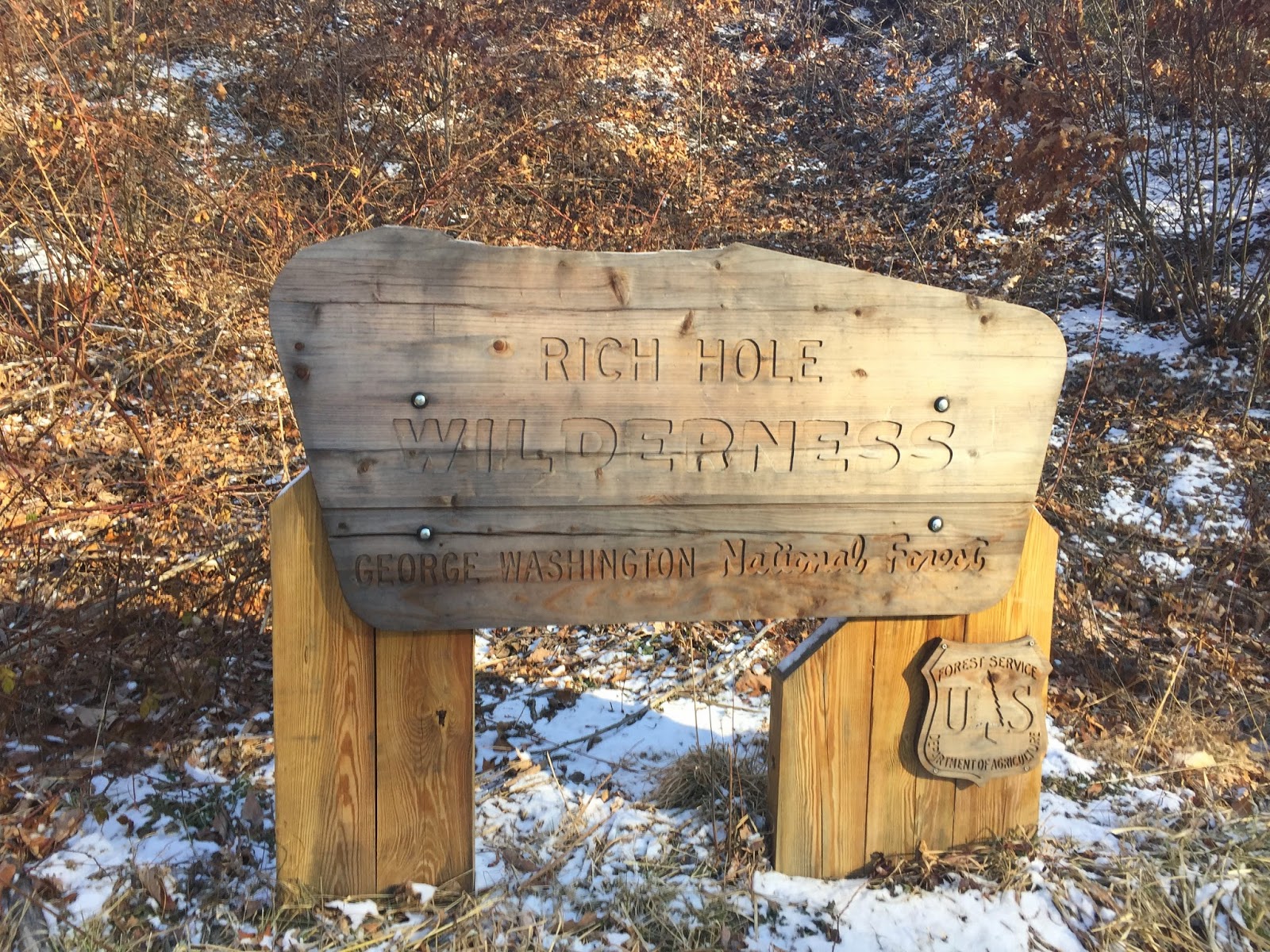 There is one trail in the Rich Hole Wilderness, and it has parking areas at either end.  The northern parking area is on old U.S. 60 right next to Interstate 64. I cannot think of any other wilderness areas in Virginia that are this close to an interstate exit. To get there, take Interstate 64 west past Lexington to Exit 43, the Goshen exit, then follow Route 850 (the old U.S. 60) to the northern trailhead. There is a pulloff on the right side of the road, a wilderness sign, and a large kiosk about 50 yards up the trail that is visible from the road.
Starting from the north, the steepest part of the trail is right at the beginning. The trail gains over 1000 feet in the first 1.2 miles. The highlight of the climb at the beginning is a large rock overlook about 0.6 miles into the hike. Hike a little further, round a couple of curves, and you reach the steepest section of the day, but it is short. For about 750 feet, the trail climbs at a 28% grade, which would translate to a 1500 feet elevation gain over a mile. Elevation gain over this section is just over 200 feet. I remember this section being brutal when I hiked it 15 years ago, but steepness seems to increase in my memory - it wasn't that bad, or that long, this time.

After this climb, the trail goes around the top of the mountain (it does not crest the mountain), and then drops 2100 feet over the next 5 miles to its low point at the southern parking area. The trail follows the North Branch, Simpson Creek between Brushy Mountain and Mill Mountain and crosses Simpson Creek so many times you sometimes think the creek IS the trail. The challenge is to get across all 16 stream crossings (plus two side streams) with dry feet.  I failed. And then, unless you have a car shuttle, you have the same challenge on the return trip. I failed again on the way back.
Fortunately, it is a pretty walk, and the trail is in exceptional shape. There were a lot of new cuts to logs that had previously fallen across the trail, and this made the trail a delight to hike. I wondered who had taken the care and time to clean up this trail - it couldn't be a mountain bike group because (1) this is a wilderness area, and (2) as a collective group, they don't seem to maintain much mileage on trails. I hadn't heard about a trail group that maintains trails here, like the Southern Shenandoah Chapter of the PATC maintains Ramsey's Draft Wilderness trails, the Tidewater Appalachian Trail Club maintains many of the St. Mary's Wilderness Trails, and the Natural Bridge Appalachian Trail Club maintains many of the trails in the James River Face Wilderness.
I was able to meet the trail maintainer and get my answer. Mark Miller was sawing at a blowdown when my dog and I descended the trail, and we stopped to talk to Mark. Coincidentally, Mark is the co-author of a book I had accessed in preparing for this hike - Wild Virginia: A Guide to Thirty Roadless Recreation Areas Including Shenandoah National Park. Mark is also the Field Director for the Virginia Wilderness Committee. Although I am not a member of this group, I have hiked with a couple of members of their board.

Talking with Mark confirmed why I rely on his book. The book is valuable because Mark has walked the areas he covers, he knows them well and it shows in the book. He told me how he loves Rich Hole, and how the Virginia Wilderness Committee is working to expand this wilderness (Map). He talked about trails he has uncovered through is explorations off of the one trail that bisects the wilderness, trails that he hopes can be mapped and maintained in the future so that Rich Hole Wilderness may someday have 14 miles of trails. Mark feels it is his duty to go out to the Rich Hole Wilderness on his off days to make sure that this wilderness has an accessible trail. He was out there when I hiked - with just his dog and several saws and loppers - the only guy responsible for about 5.6 miles of trail.  I felt like a slacker for only maintaining 2.5 miles of trail in Shenandoah, and doing it with a co-maintainer!

This is not an easy trail to maintain, in part because Rich Hole Wilderness experienced a large forest fire back in April, 2012. This fire closed the Rich Hole Trail for a while, and even caused a temporary closure of Interstate 64 because of smoke.  (Trail Closure Map.) Even nearly 3 years later there is much evidence of that fire, as shown in the charring of the Yellow Poplar in the photo below.


Normally, after a wilderness hike, I might think that I was inspired by the peace and serenity that getting away from other humans might provide. In this case, I was inspired by my interaction with the only other person I met that day. Mark Miller is an inspiring guy to come across on  hike!

There are currently 24 different wilderness areas in Virginia. Rich Hole is the 8th largest, but it would move up to the third largest with the addition. Mark showed me that there is still a lot to explore in this area.  I won't take so long to return for another visit.

Like what you see?  Check out my other blog postings!  LINK.
Posted by Jeff M at 2:20 PM