The Reservoir Hollow Trail is in the George Washington National Forest near Buena Vista, Virginia. On a sunny January Saturday, my friend Larry and I found ourselves down in Buena Vista (pronounced like "view" with a "B" - "Beu-na Vista")  helping the Potomac Appalachian Trail Club's GPS Rangers surveying crew obtain precise GPS measurements of trails in the George Washington National Forest.

South of St. Mary's Wilderness, these trails and the Whetstone Ridge Trail are the only choices in the GWNF Pedlar District west of the Blue Ridge Parkway.

I had tried hiking the Indian Gap Trail last July. Here are examples of what I encountered.
I had enough patience for about a mile of this overgrowth before turning around, because most of the trail seemed to be under a power line cut that allowed plant growth to be uncontested.

We pulled off - there is room for 4 or 5 cars on the side of the road.

And we hiked in a few hundred yards, just to check things out, before coming across this sign.

There are a couple of things to notice about this sign.  First, this sign did not strike me as one you would see on a trail that is "not active." And second, the maps indicated that the Indian Gap Trail ends here, and not the Reservoir Hollow Trail. We later found out from the Forest Service that the Reservoir Hollow Trail is still active, but none of the rest of the "system" remains in use.

Since my attempt to get here by trail last summer started at 21st Street and not, as stated on the sign, at 12th Street, we dropped a car here and drove back down to Buena Vista to find 12th Street and the other end of this trail.

We returned west on U.S. 60 until we came to U.S. 501, and we headed south on 501 looking for 12 Street.  Complicating our journey was the fact that 12th Street has a gap in it, so the trailhead is actually accessed using 13th Street. But we eventually found our way to the trailhead, which was marked by another new mileage sign: 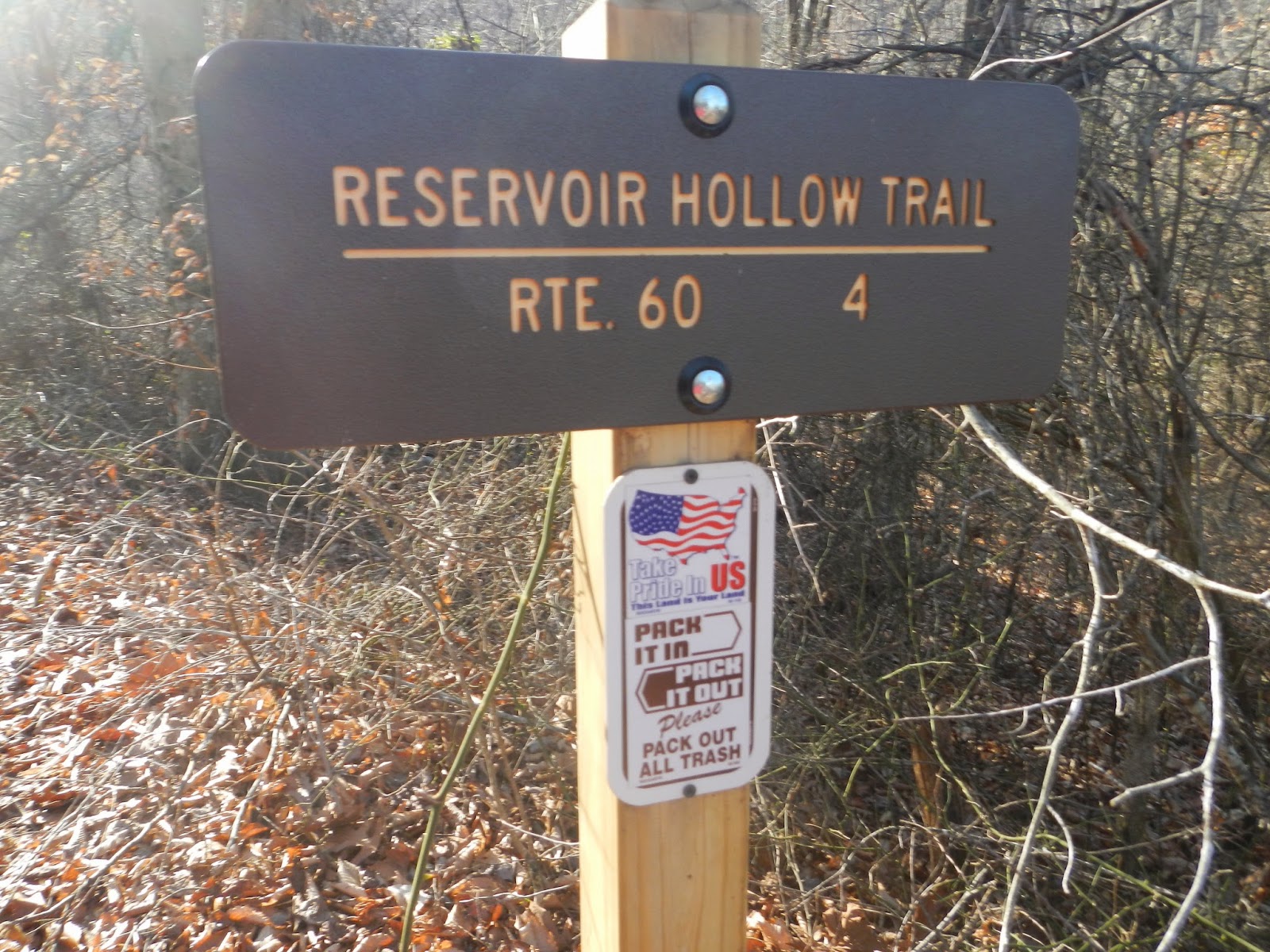 Parking seemed a little sketchy on this end, as we passed numerous "No Parking" signs (we interpreted those to mean "No Parking right here.") And we passed another sign that said "Public Right of Way... Foot Travel Only." But the best parking spot was off the road just beyond that sign so we parked there, just before the city police shooting range.
The trail itself was easy to follow and had been maintained. There were 6 stream crossings before we started to gain elevation, and at the 0.7 mile mark we went by a large concrete container that looked like an old pool, but we believe it is really the old city reservoir. Once we started to climb, it was at a relatively easy 13% grade, which translates to about 700 feet per mile.
The trail was easy to follow at all times, and after two miles we came to the following sign: 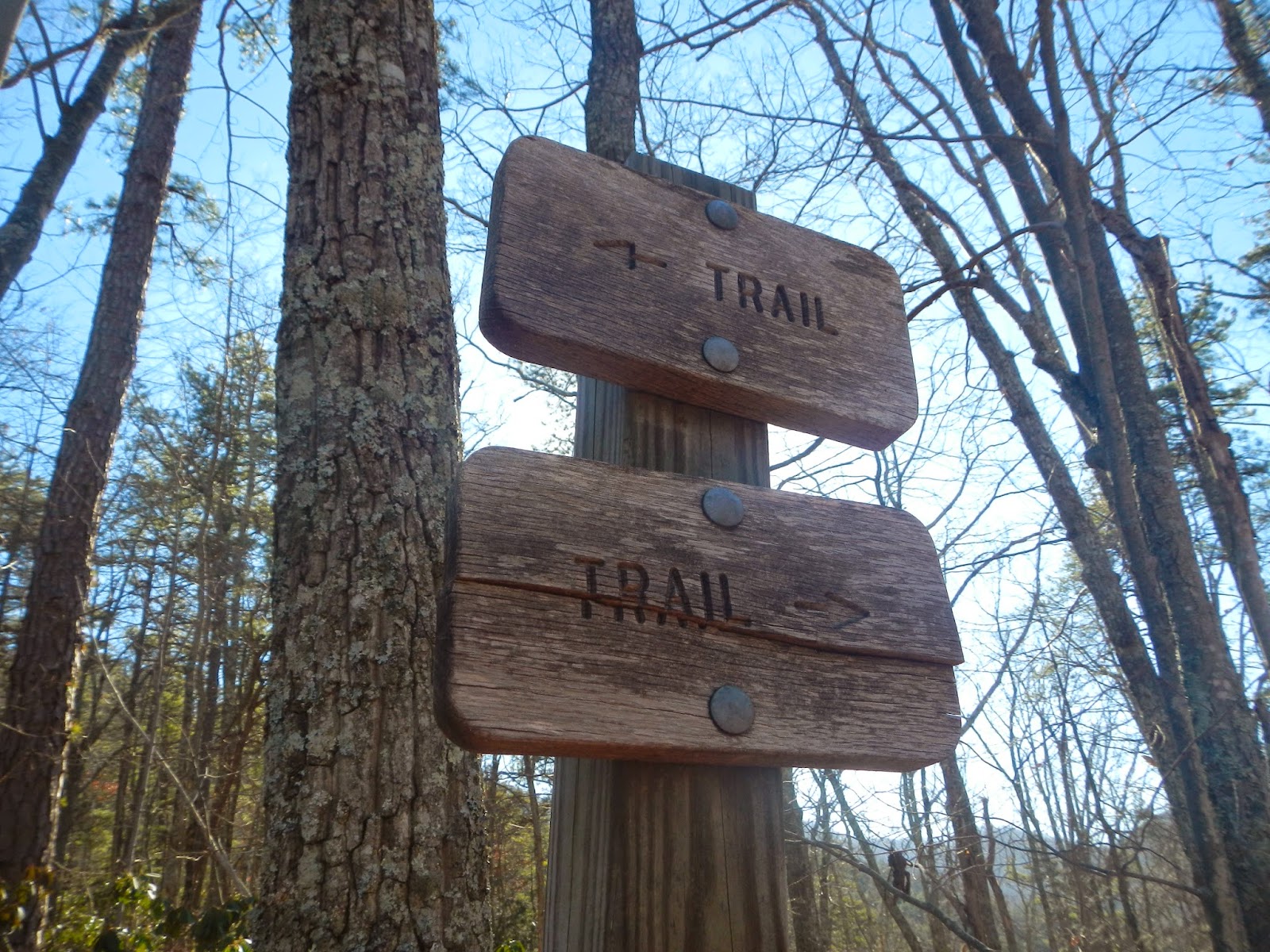 Below is another perspective of that sign, showing the trail going by the sign, and rocks indicating that you should stay on the trail. I figured that this was the beginning of the old Elephant Mountain Trail, but we did not have time to explore that trail at the time. Was that also active? We didn't know, but at the start of the day we didn't think any of these trails were active.

About 0.2 miles after the trail intersection, we inadvertently got off trail.  The light cyan line represents the way we should have gone. The dark cyan shows the route we took. We didn't realize we were off our intended route until we came upon the Blue Ridge Parkway at a point near Indian Gap that is invisible from the road - the maps indicated that the trail didn't meet the BRP.  So we bushwacked downhill until we came to the intended trail. We figured that the trail would be evident when we crossed it, as most of the time our trail was easy to follow. We did find the trail again, after a bushwack shown on the map below. 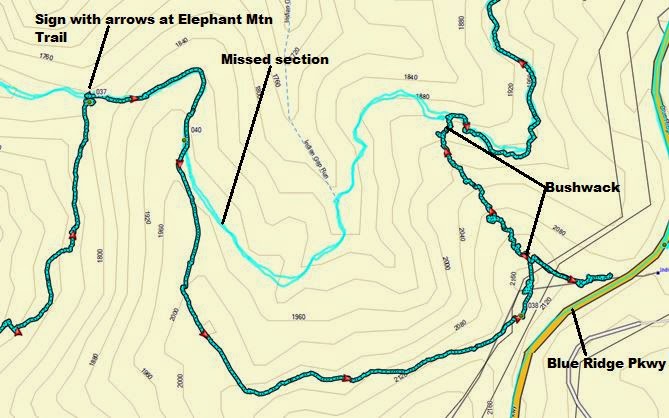 I went back the next day and started the hike from U.S. 60, intent on figuring out where we messed up. The spot where we lost the trail is shown below, and it is important to note if you plan to take this trail from the City of Buena Vista to U.S. 60 like we did. This part is not at all obvious. You need to know that it is two tenths of a mile after the dual trail signs, and there is a small pile of rocks (a "cairn") at this point. The trail really looks like it should go to the right here, and the trail to the left is not obvious at all. 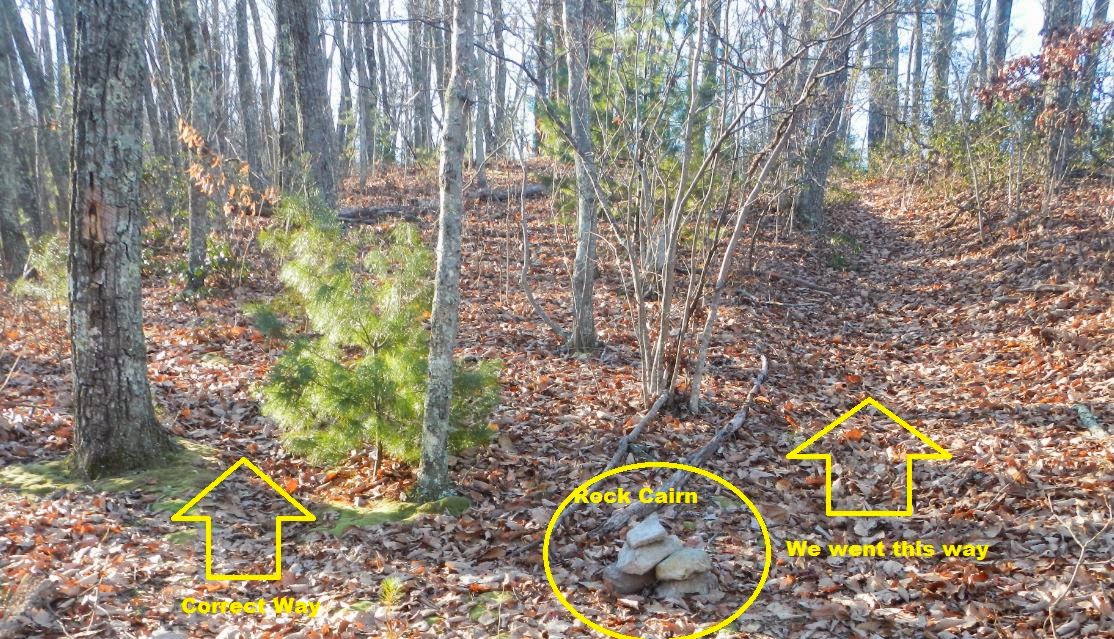 When I returned on Sunday, I also took the Elephant Mountain Trail, which is supposed to end at the summit of Elephant Mountain. This trail is no longer maintained, but it was generally easy to follow right up to Elephant Mountain. About a hundred feet or so below the summit, however, the trail seems to peter out with a steep climb required to get to the top. I was hiking alone, so I decided not to risk the final summit, though I was surprised to later find out that there is a geocache at the top. (Link) Then again, it hasn't been found since 2013, so it may not be there anymore.

I'd like to go back and summit Elephant Mountain sometime, but would wait to do it until I could bring another strong hiker. Heading out the Elephant Mountain Trail to the point where it fades adds another two miles and another hour to the hike, along with an extra 1000 feet elevation gain, total.

Because the trail is relatively short, it is easily done as an out-and-back, particularly if you stay on the established Reservoir Hollow Trail and not the inactive Elephant Mountain Trail. An out-and-back on the Reservoir Hollow Trail is around 8 miles total. And the U.S. 60 trailhead is only 7 miles west of the turnoff on 60 for the Cold Mountain/Pleasant Mountain Trails - less than 10 minutes in the car.
A side note.  If in Buena Vista, this non-red meat eater says absolutely do not leave town without experiencing JJ's Meat Shak. They serve wood fired pizza and the best roast turkey sandwich I've ever tasted (get it with provolone and roasted onions). This restaurant was just a trailer and some picnic tables a couple of years ago, and has grown dramatically since then, though the place still has a great semi-finished feel to it. I enjoyed the sandwiches so much that I returned bought three more on the way out of town the next day to take home to the family.