One of the problems with hiking Shenandoah National Park in the Winter is seemingly random closures of the Skyline Drive. On December 28th I drove up to work on maintaining my section of the A.T. only to find the Drive closed - I should have called first, but there was no reason in Charlottesville to believe there would be issues in Shenandoah. Sometimes, this closure means that you can substitute a really peaceful walk on the Skyline Drive for your planned hike. This can be great when there is snow on the ground; not so much when the Drive is closed for patches of ice.
Over the years, I have entered the park from roads along its eastern and western boundary during winter when the Drive is closed.  There are at least 10 different access points to the park from roads outside of park boundaries in the Central and Southern Districts of the Park. I am leery of trying new access points without finding out about them first in a guidebook or other resource, as some nearby landowners are touchy about hiker cars parking on the side of the road.

One option I recently encountered is Browns Gap Road in the Southern District of SNP.  It gives access to the Loft Mountain Area, the Doyles River Cabin, and the Doyles River/Jones Falls loop. It is really only viable for Charlottesville and Richmond hikers, as hikers in the Valley and further north have other options that are more convenient to them.

When driving north of the little crossroads called White Hall towards Albemarle County's Patricia Byrom Preserve and its great lung-burning hikes, I had noticed parking signs on the side of the road just as it crossed Doyles River. It would take a new hike to check this out, and I could check off a section of fire road never before hiked in the Park.  Parking is at the intersection of Rt. 810 and Rt. 629, where 810 takes a 90 degree turn, about 6.5 miles north of Whitehall.  It is easily identifiable by the green and white signs near the road.
The hike itself parallels Doyle's River, heading past horse and cattle pastures, until it doglegs right over the river at the point where it meets Headquarters Lane.  Continuing straight, you would come to the end of the road in .15 mile.  Take the right and follow Browns Gap Turnpike.  There must be some confusion for some hikers, as a prominent sign at the Doyles River crossing warns visitors that this is not Sugar Hollow, the popular access point due west of White Hall that includes the swimming spot known locally as "Blue Hole." 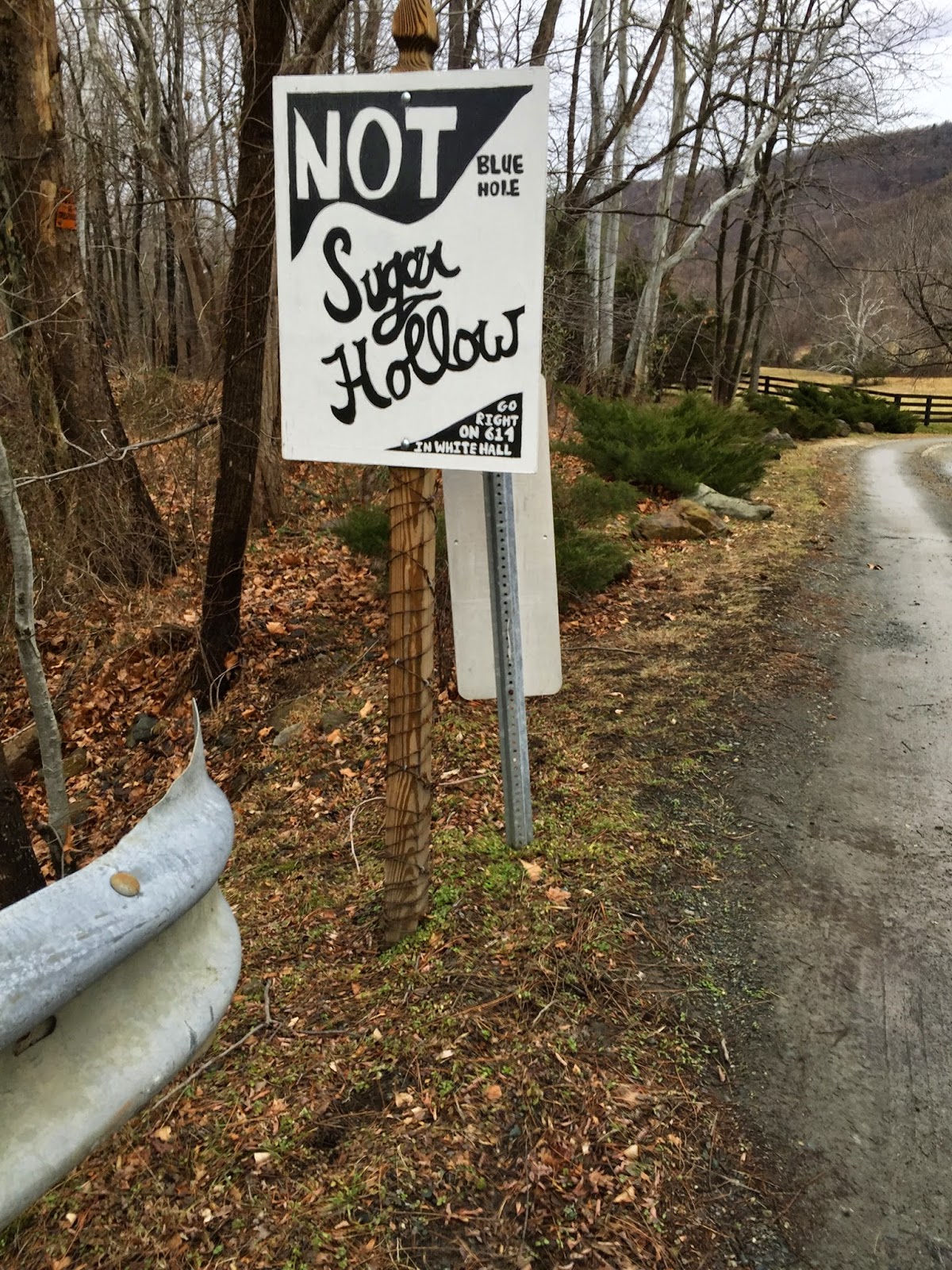 The land in the area around where I parked was originally owned by Benjamin Brown.  A book, "The Undying past of Shenandoah National Park," reports that Benjamin Brown paid taxes in 1782 on 12 slaves, 5 horses, and 28 "neat cattle." One of Brown's sons, Brightberry Brown, owned the property called "Headquarters" that I walked by.  According to one source (link), Brightberry operated a toll house and a furniture factory in the area around Doyles River.  That source also says that Brightberry built the turnpike with William Jarman.

The Browns at one time owned all the land from the top of the Blue Ridge down to White Hall, and grew tobacco at higher elevations.  Historians seem to have some disagreement about the original house in the area.  It is either the house just before the bridge over Doyle's River or second house you pass on the old turnpike - the one now called "Brightberry."
The Browns Gap Turnpike was the first turnpike in Albemarle County.  It was started in 1790, and completed in 1805-06.  It followed and improved upon a well-worn path, and was used until the National Park was constructed.  Stonewall Jackson marched his entire army through Browns Gap in 1862, during his famous Valley Campaign.  Headquarters was used as a wartime hospital, and several soldiers who died there are buried behind the house in the family cemetery.

The turnpike passes into the woods shortly after leaving Brightberry behind, and there are numerous "No Trespassing" signs pointed in every direction on trees along the road.  I believe these signs refer to the land on either side, and not the road itself.  After all, there is a designated parking area for hikers, and there is no gate across the road.  Later up the hill, the road forks, and the side fork is blocked by a gate with the same type of sign.  After that, no more "No Trespassing" signs.
After passing into the woods, the road begins a steady climb at an 8% grade, which translates to a little under 500 feet in elevation gain for every mile.  The road climbs at 8% for the next 2.75 miles, ascending 1141 feet total.  The road passes into Shenandoah National Park a little after the 2 mile mark, and the mileage post says that it is another 2 miles to the Doyles River Trail.  But when you reach Doyles River Trail, it is only 1.5 miles back to the park boundary.  What happened to the other half mile?  My GPS split the difference, measuring 1.7 miles between the posts.

The surface of the road seemed to change immediately upon entering the park.  It was much less rocky, and more of a soft surface inside the park.  There were multiple pretty wintertime views along the way to Doyles River Trail, where I turned around.  And the roar of Doyles River Falls was heard from the road - unmistakable.
In all, it was a nice combination of things - solitude, history, views.  I would definitely return for another hike sometime when the Skyline Drive is closed.