This posting is part of my effort to document trails in the North River District of the George Washington National Forest that don't have much in the way of online descriptions.  This trail is in the southwestern portion of the District, and was part of the old Deerfield Ranger District.  Descriptions and photos are from hikes occurring in late March, 2020.

The Back Draft Trail is a three mile long connector trail, allowing a resolute hiker to travel from the Shenandoah Mountain Trail (#447) and/or the Marshall Draft Trail (#547) near Wallace Peak to the top of Walker Mountain or the Mill Mountain Trail (#492) when combined with a couple of other trails. It can be considered a "low use" trail.

From the east, it has a trailhead on Clayton Mill Creek Road FSR 61, which is an easily traveled Forest Service road.

The western end also has parking, just before a gate on a Forest Service Road:

I parked at the eastern end and hiked this as an out and back, combined with the Brushy Ridge Trail.  At the eastern trailhead, there is parking for multiple vehicles at the site, though it also appears to be a campsite, so you might have to compete with campers to park here. 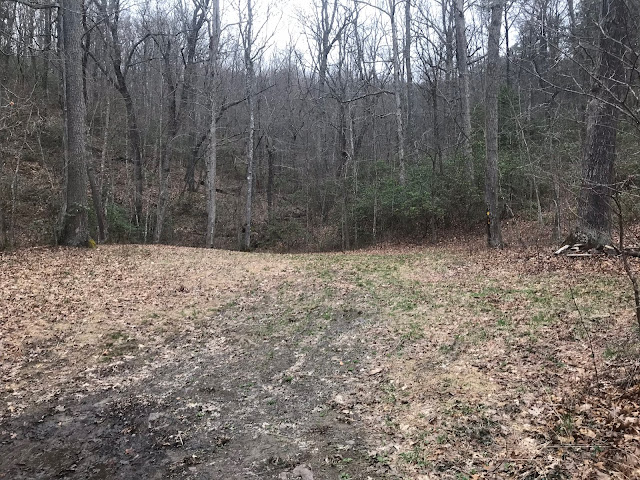 There is an old sign on the Clayton Mill Creek Road that signals the trailhead. 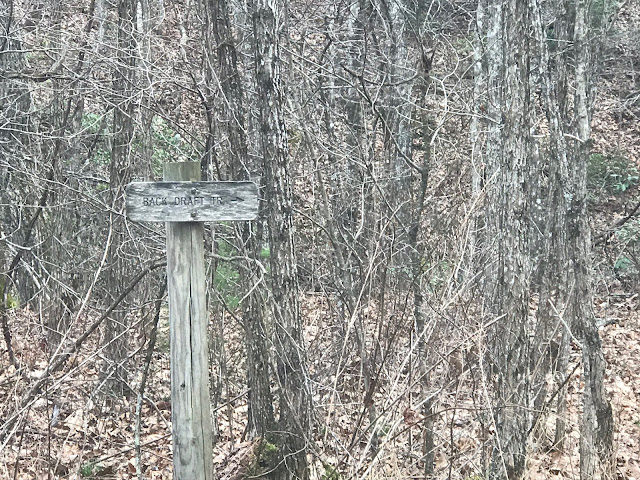 This trail has no views. The section of trail on the eastern slope of Walker Mountain is in terrible shape in 2020 - the trail doesn't even exist, though copious blazing is found on trees so you cannot get lost. Note in the photo below that trees are marked, but this is otherwise a bushwhack with no visible trail.  Putting it another way, there is no trail, but you won't get lost! 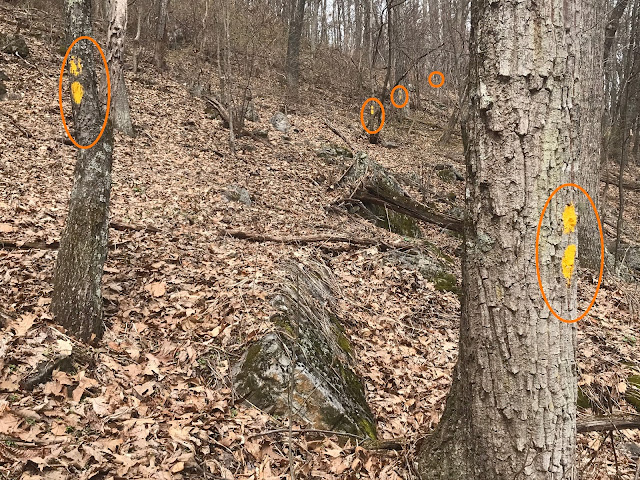 Because this part of the trail is in such rough shape and because it ends at Clayton Mill Creek Road, the long distance hiker would do much better avoiding the Back Draft Trail east of the Walker Mountain summit.  Instead, hike Walker Mountain's ridge trail (shown on current maps as a forest road, but it is closed to traffic) south to the Sam Judd Ramsey Trail (#660) to the Clayton Mill Creek Road.  You can then summit Sideling Hill and take a well maintained hiker trail along the summit south to the Mill Mountain Trail if you want to go further.

This is a view of the summit of Walker Mountain looking north, from the point where the Back Draft Trail crosses. 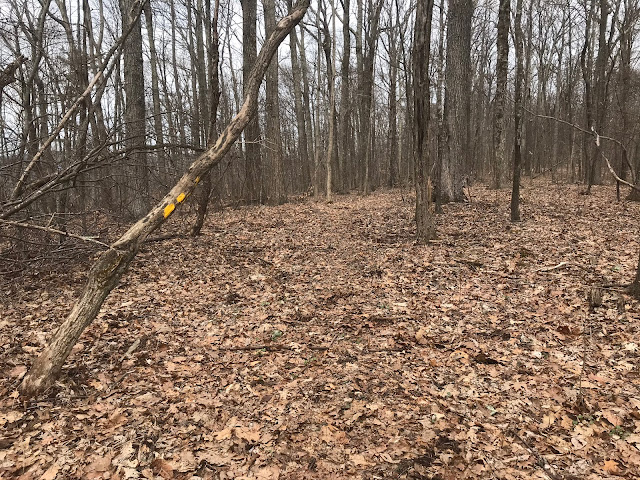 The western slope of Walker Mountain is in much better shape, and can be followed immediately, as shown below. 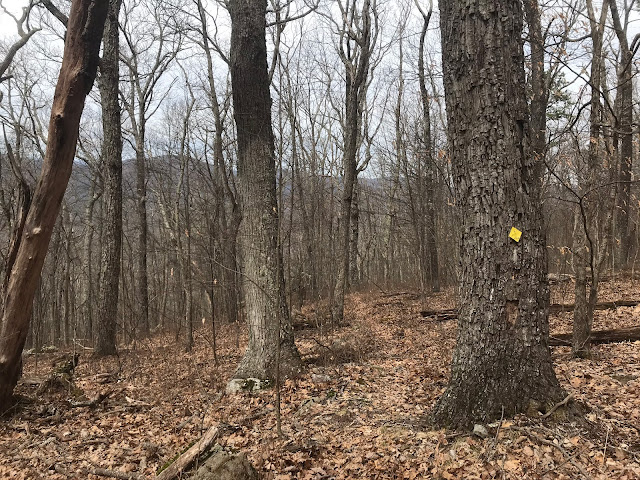 The Back Draft Trail drops into a valley and crosses Mill Creek.  This was a little bit of a tough crossing in March, with water levels up.  There is no bridge or series of stepping stones to make this crossing. 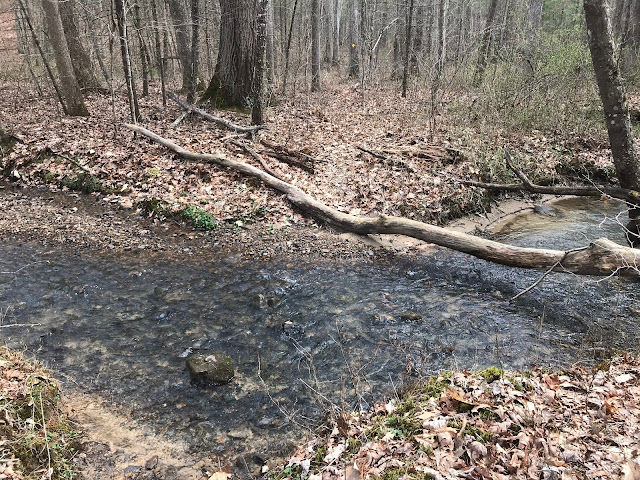 After crossing Mill Creek, the trail follows a couple of old woods road to its western terminus, on an active Forest Service road, just off of Bright Hollow Road. It is marked by a sign. 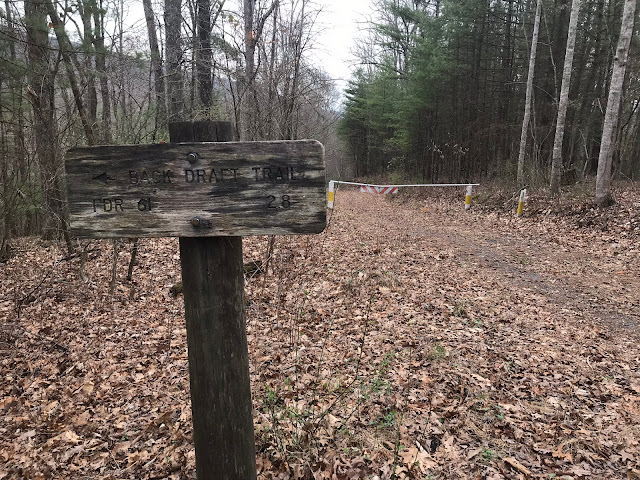 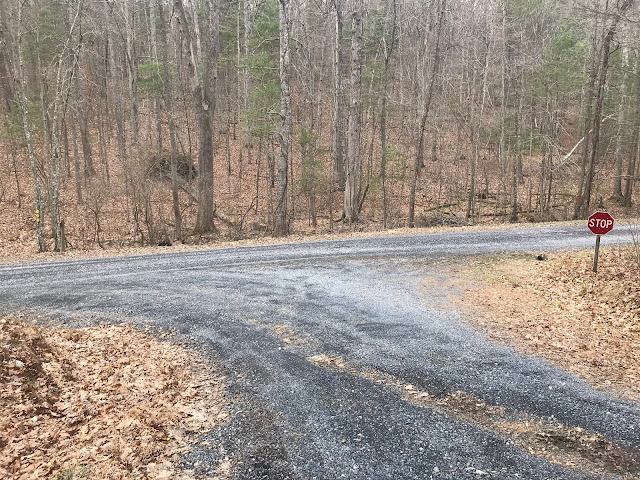 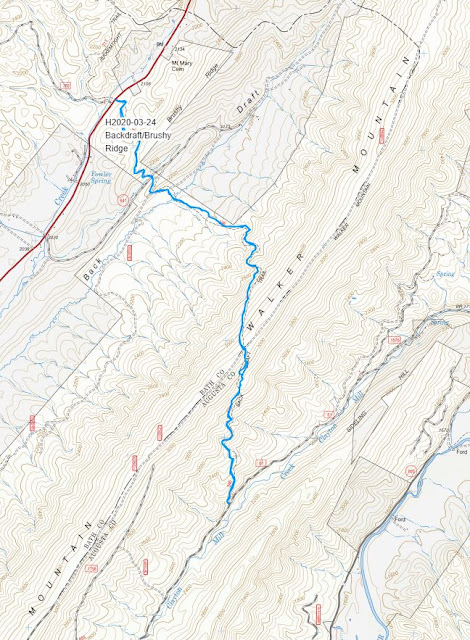