In the wake of the current pandemic, with the ATC advising everyone to stay off of the AT because of personal encounters, and the PATC advising everyone to refrain from trail work, I chose a trail I've never hiked out northwest of Goshen.  Figuring that few people hike it, I saw this as a great opportunity to practice some "social distancing."  I chose the Mill Mountain Trail, in the George Washington National Forest a little northwest of Goshen - in the northwestern corner of Rockbridge County.  There is no telling in advance what trails out this way will be like - I've hiked really nicely maintained trails, and I've hiked trails that haven't been maintained in 20 years.

Finding the trailhead was a little more difficult than it needed to be, thanks to the Nat'l Geo/Trails Illustrated Map #788, "Covington/Alleghany Highlands," which incorrectly shows the trailhead right off of the main road through the area, Virginia Rt. 42.  Instead, it is off of Rt 600, Big River Road.  The map should show 42 heading NE east of Panther Gap as 600.

This map also shows the trail starting at the back end of a gated forest road.  It actually parallels that road, starting from Rt. 600.  A downloaded .gpx track, which I placed in my GPS and used extensively during first part of this hike, proved much more useful than this error-prone map.  A link to the track is found later in this description. 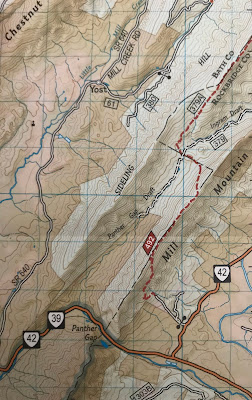 The exact turnoff is FR 1596, which is permanently gated, as shown on the map with a black gate icon.  (Those open part of the year are orange.)  There is room for 3 or 4 cars to park here. 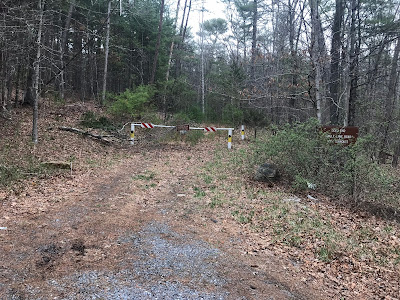 Looking from Rt 600 to the gate, you will see a trailhead sign on your left. 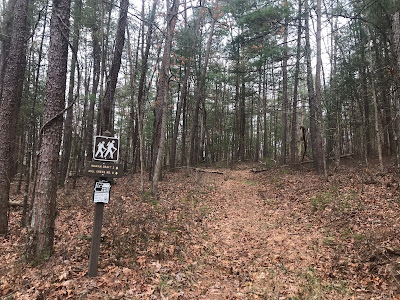 The trail appears to be an old road, and it leads into a pine forest. 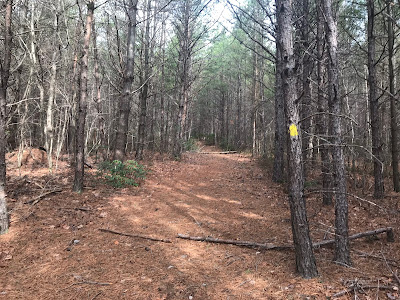 There are houses on the left, and at one point it almost seems like the trail goes right through the yard of an occupied house. 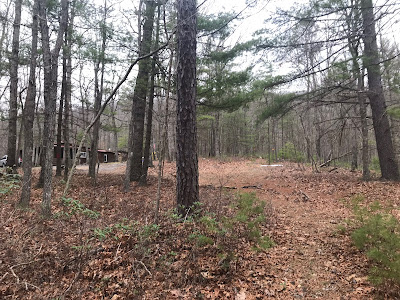 After this house, however, the trail gets more secluded, continuing in a straight line through a pine forest.  After the pine forest ends, you find yourself in a little bit of a cove at about the half mile mark.  Following the yellow blazes on trees is important here.  I walked through a tree that had been cut and past an old blaze, and then saw nothing.  Fortunately, I had the trail's track loaded into my GPS and was able to find it after some searching.  But it took the return trip from the mountain summit to discover that the trail cuts left over the nearby ridge and follows a path half way down the other side of that ridge before climbing.  The photo below shows the route of the trail.  I went straight and continued straight until the trail cut back and crossed my direct line. 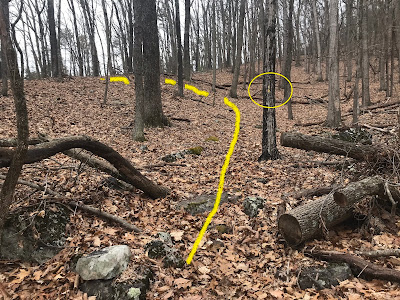 None of the rest of the trail was difficult to follow, and it looks like it had been expertly constructed decades ago. 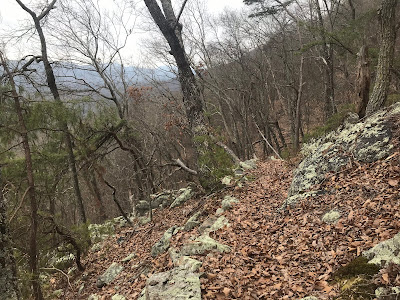 At the summit of Mill Mountain starting at the 1.3 mile mark, after a 1600 foot climb at a 14% grade, the trail walks along some large boulders, which adds to the scenic nature of the route. 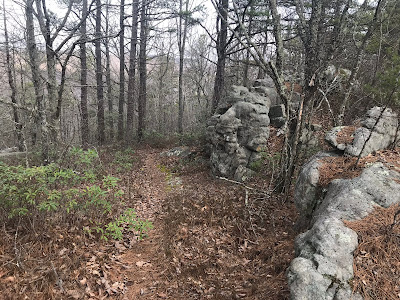 In between some of these boulders, 1.6 miles into the hike, is a nice opening to the east, where the Calfpasture River could be seen winding through the Marble Valley, and further away Little North Mountain with Jump Rock was visible.  It is possible that a nicer day would have also given views further east to the Blue Ridge and The Priest. 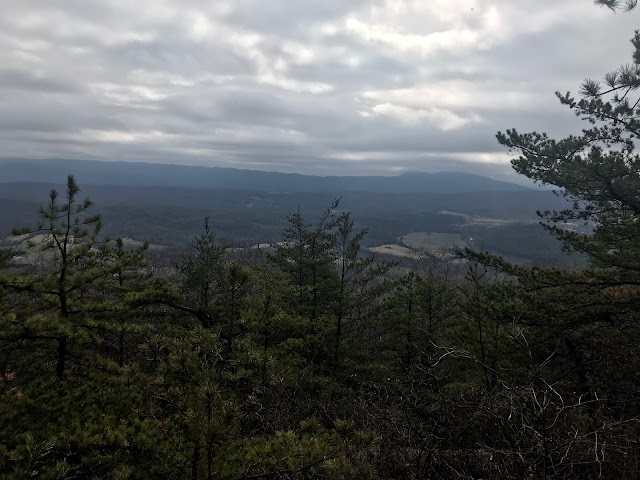 The trail followed the ridgeline until the 2.5 mile mark, when it cut left and began a gradual decline towards Ingram Draft. 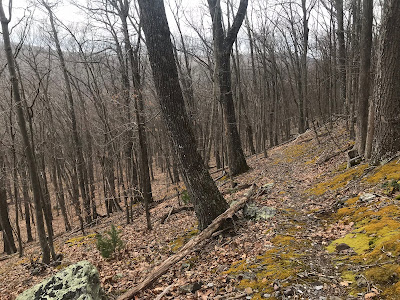 Along the way was a medium sized forest inside a valley that is entirely within the National Forest boundary. 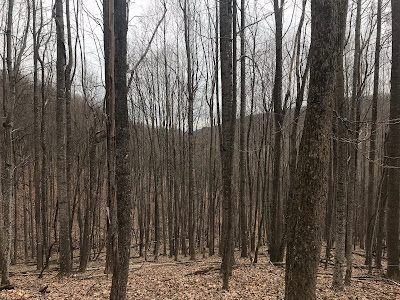 The trail merged into an old woods road at the 3 mile mark.  It almost isn't visible on the way out, but returning could present some confusion as it appears that old road is maintained as a trail, presenting a Y intersection.  But the proper trail is the only one that is yellow blazed, so it is easy to follow.


At 3.2 miles, reach an intersection with a woods road that appears to still get a little use.  This is the Ingram Draft road, found on old topo maps.  There used to be a trail sign here, but now the post is all that remains. 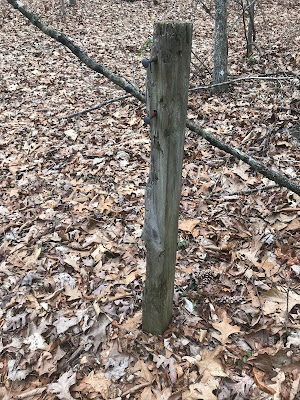 Continue straight ahead here following the yellow blazes, on another old road.  Maps from the 1940's appear to show that this was an access road to an old fire tower, long gone now and located further up the mountain.  One source indicates that the tower was taken down in the 1950's.  Link.

I did not go much further on this trip, choosing to turn around at a stream bed because my 4 legged hiking companion was having issues with a paw.  I never saw any campsites along the way, which leads me to believe that the trail's use is primarily from hunters.  And, although I could hear vehicles on Rt. 42 during the first part of the hike, after the trail dropped towards Ingram Draft, there was no external noise.  I felt totally secluded.  I plan to complete this trail in the future and was impressed with its condition.  Another seldom used gem!

For the rest of this trail, check out this post: Link.
Posted by Jeff M at 1:58 PM