Driving south on Virginia Route 42 in Augusta County, after passing through Buffalo Gap and past the turnoff for the Old Parkersville Turnpike, but before reaching trailheads for Falls Hollow and Elliott Knob, you may notice a trail sign on the left side of the road.  It highlights a short trail that climbs Little North Mountain towards Kings Gap in far northern section of the Goshen-Little North Mountain Wildlife Management Area. 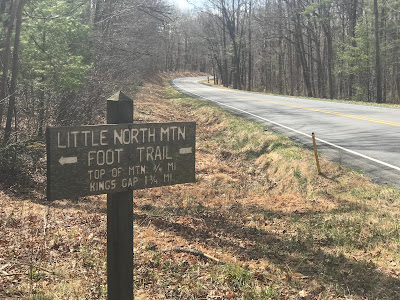 This sign has piqued my interest in the past, as it represents a trail that is not found on any maps I've looked at.  Back in March, 2017 I stopped to check it out.  The trail climbs to the nearby railroad tracks.  But on the other side of the tracks, there is no blazing, no signs and no trail that I could find.  There is a woods road on the other side of the tracks, and I followed it in each direction looking for the trail, without success.

For three years I drove past on my way to other trails and wondered what the deal was with a trail that has a sign along the highway, but could be followed only for several hundred yards before disappearing.  So, when looking for a new trail to hike in March, 2020 - three years later - I decided to hunt down this trail.  I found it, following these steps.  Below is that story, and the directions for others to use the trail.

I'm familiar with Kings Gap.  On the east side of Kings Gap is Camp Shenandoah, the local Boy Scout camp - my son's troop camped there many times. A trail connects the camp with access to Elliott Knob, on the west side of Virginia 42.  The trail cuts over Little North Mountain right at Kings Gap. It starts as a trail in the scout camp, merges into a road near Kings Gap on the east side, and follows that road for a while on the west side before turning off as a trail again and crossing Route 42 at the trailhead for the Falls Hollow Trail.  I had hiked to the falls several times without ever noticing the white blazes across the road signalling a trail on the east side.

Parking at the Falls Hollow trailhead, I followed the trail to the top of Kings Gap then turned north on a woods road, looking for the Foot Trail from the other end.  I marked the site of the sign pictured above in my GPS, and when I was about even with the waypoint as I worked north, an side road came in from the east. I took the side road.  Wrong move.

The side road died out, so I went off trail up to a ridge and bushwhacked north until I crossed a trail.  The ridge petered out and I dropped down to a gap formed by a stream.  As I came to expect when traversing the rough terrain, I found a trail when I dropped down to the stream.

Taking the trail west, it came out at an old road that parallels the railroad tracks.  There is a big sign here. 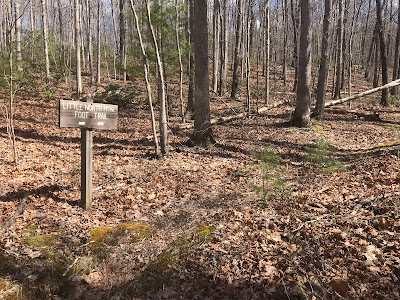 So, to take this trail, leave Route 42 at the sign for the foot trail.  Head up the slope and cross the tracks.  If you look at the photo below, the trail leaves the tracks heading north as following the yellow line.. 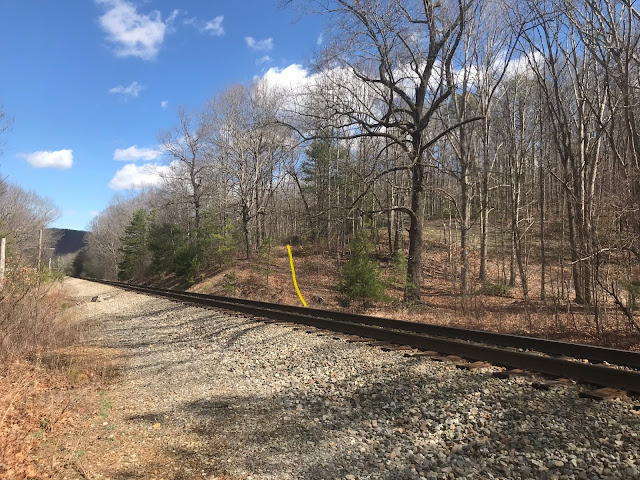 Continue north on the road until you cross a stream.  Just after that is the sign for the trail.  Take this right.  The trail crosses the stream and continues towards Little North Mountain. 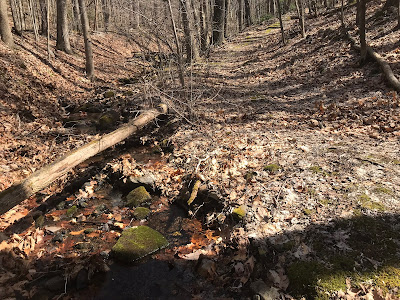 When it starts climbing, it climbs steeply through bushes, which are well cut back for the most part. 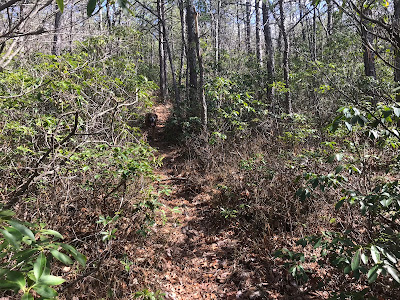 The trail reaches the ridge at 0.7 miles after leaving the old road.  There is another woods road here and a sign for the trail. (I would have seen this if I'd stayed on my original road before I had to bushwhack.) 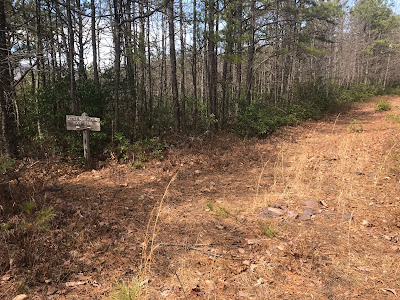 Taking it left only leads to a dead end - I could not find any trails continuing past the end of the road. 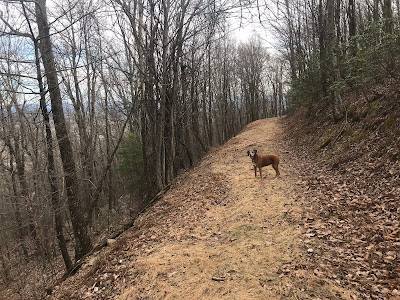 So, instead follow the road to the right (south).  Along the way, there are nice views to the southeast, of the farmlands towards Camp Shenandoah and the Blue Ridge. 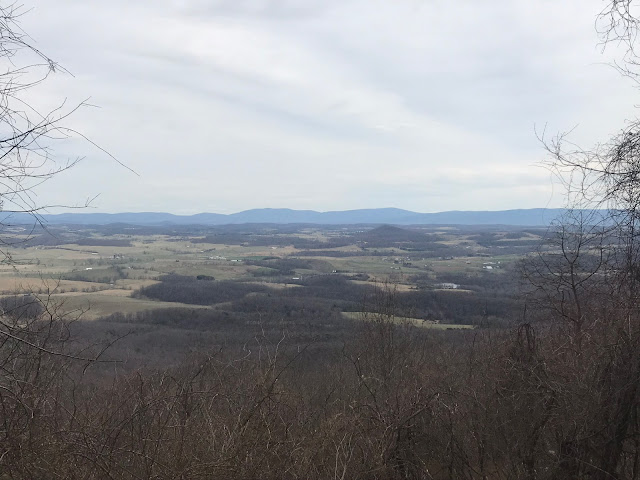 Continuing on the road takes you to Kings Gap. 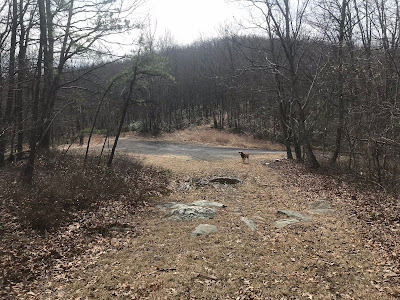 To the left, a road heads down slope, and a trail takes you to Camp Shenandoah.  To the right, head down a different road following white blazes that will take you to the Falls Hollow trailhead.  Continuing straight continues along the Little North Mountain crest.  In theory, the trail continues along the ridge all the way to Jump Mountain, over 16 miles south.  I don't know for sure - that is for future explorations.
Posted by Jeff M at 11:53 AM