Sometimes it is fun to try finding and hiking a trail that you aren't sure exists. 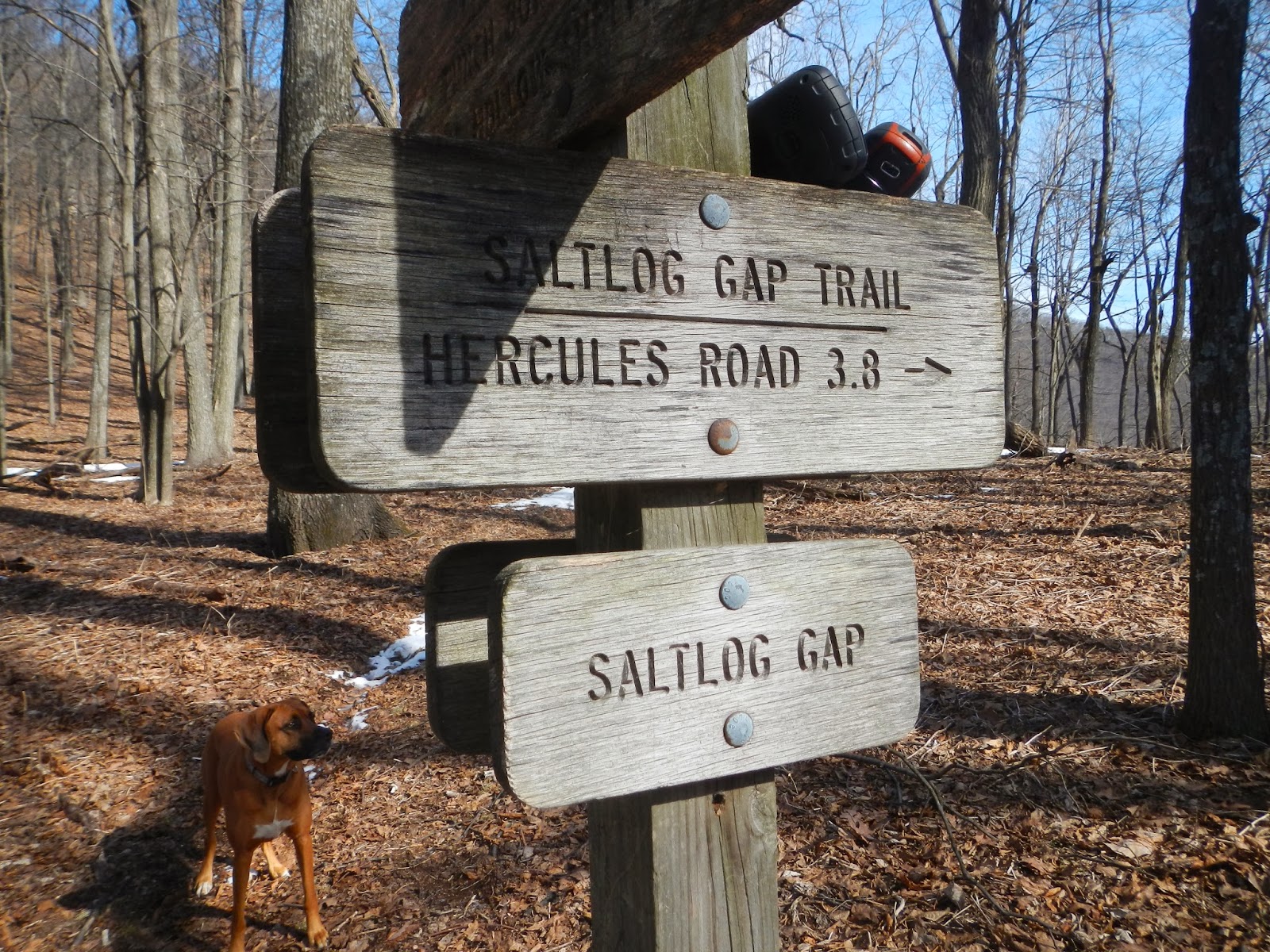 The Saltlog Gap Trail is not found on any map that I own - including the ATC's map of the Appalachian Trail, the Trails Illustrated map of this area, or the PATC Map 13.* Nobody I knew had ever hiked it, or even heard of it.  For me, it existed only as a destination on a photo of an Appalachian Trail sign at a place called Saltlog Gap that I hadn't personally experienced in about twenty years.  After seeing the photo, I was curious.  The trail must exist, or else why would it be on the sign?

(*Update: since this account was originally published, the PATC has revised Map 13 and included the Saltlog Gap Trail on the new edition, due to this report. Link.)

Although the trail is described in the latest edition of the PATC's Hiking Guide to the Pedlar District, that volume claims that the trail ends at the Blue Ridge Parkway.  The latest edition is, itself, over ten years old. The sign on the A.T. indicates a different end point than the book described.  And the book's author clearly gave up on the trail when hiking it only a short distance starting at the other end - the end the sign doesn't say the trail goes to.  He didn't appear to even try hiking it from the A.T. end.

After confirming with a source from Lynchburg's Natural Bridge Appalachian Trail Club that the trail does exist and ends at Hercules Road as stated on the sign, I made plans to explore this trail.

There is one incredibly important warning that my NBATC contact gave me regarding the Saltlog Gap Trail:

It should only be hiked on weekends!

This is because the Saltlog Gap Trail actually winds its way through an active quarry.  My interest was definitely piqued when I found that out.

0.0 Miles.  The Trailhead for the Saddle Gap Trail isn't obvious from the Hercules Road, except that it is a couple of miles up the road and has a small parking area at its start - maybe 3 cars max.  I knew I was in the right place thanks to a waypoint I loaded into my GPS and obtained from my GPS software program. There is no hiker sign; only a large boulder blocking an old road.  The boulder has a navy blue blaze painted near its base.


Shortly after starting up the trail, but out of sight from the trailhead, was a sign confirming that I was on the Saddle Gap Trail.  There were a couple of small stream crossings before the trail turned into an old woods road and started to climb.  After leaving the woods road at a sharp angle, the Saddle Gap Trail switchbacked gradually up the mountain, giving views through the leafless trees.

2.4 Miles. I arrived at the A.T. after about 55 minutes of hiking - 7 minutes faster than I did 20 years ago when I wrote my time on a map.  I felt good about that - I am competitive in that way.
After reaching the Appalachian Trail, I headed north for a little over a mile to Saltlog Gap.  The trail did not go over Silas Knob, but instead skirted the summit on its western edge, meaning shade and ice on parts of the trail.
3.5 Miles. At Saltlog Gap, the sign for the Saltlog Gap Trail was still there.
Also there was a sign stating that the Belle Cove Trail is closed following a flood in June of 1995.  I knew this trail was no longer maintained as it had been washed out in a rainstorm.  It is curious, however, that there would be a sign about this trail nearly 19 years after they closed the trail.  I am left with a couple of questions - (1) whether this was the same rainstorm that drowned much of Madison County in June, 1995, within a week of when I got married.  I had always heard that the rainstorm was somewhat isolated to Madison County.  And, (2), why the forest service would be telling us not to take this trail - after all, hunters traipse wherever they want without trails, and the forest service doesn't say anything.  I have driven U.S. 501 where the trail used to end, and it is clearly still forest service land. There must be more to the story.

It is a shame the Belle Cove Trail was never rebuilt.  The previous edition of the PATC's Hiking Guide to the Pedlar District (from 20 years ago), said that the Belle Cove Trail was one of the prettiest trails in the Pedlar District.
From Saltlog Gap, I headed east looking for a trail.  It wasn't an easy search.  Leaves were down, and I could find no blazes or ruts indicating a trail.  After wandering the woods for several minutes, I saw a cut log and descended to it, and found the trail quite clearly.  If you decide to take this loop, this may be the single hardest part of the hike, and note that the trail does not follow the ridge as you might expect, but drops into a small cut in the mountains slightly north of the ridge.

There were several nice winter views along the trail, and the trail was both blazed and very clear for the rest of its route.

5.0 Miles. About 1.5 miles after its start, the Saltlog Gap Trail merged into an old woods road, which is marked on some maps.  This road intersected near the summit of Peavine Mountain.  Shortly after that, I came upon the one outstanding view of the hike, at the edge of an old, unused quarry.  (Don't look down!)  From here I could see the rocks that form Rocky Row, and which cut down to the James River and form Balcony Falls.  On the other side of the James, which is unseen from this vantage, are the mountains of the James River Face Wilderness, and Apple Orchard Mountain in the distance, which is the highest point on the A.T. heading north for the next 1200 miles.

The trail then descended to a sharp turn and came out on the edge of an active quarry.

5.9 Miles. After descending into the quarry in a spot marked on maps as "Slaty Gap," the rest of the hike followed the access road, which is a continuation of the road I parked on, Hercules Road.  It was hard to walk this road and not think I was walking somewhere that I wasn't supposed to be, but there was an occasional but infrequent blue blaze next to the road.
7.2 Miles. And, when I came to the gate closing the road to public use, the Forest Service stated that I was welcome to walk the road.
I am not so sure how the Old Virginia Brick Company feels about it, though.  This company mines the area for rock that is used to make its fancy bricks.
There was room for a few more cars to park near the gate, which is 0.2 miles from where I left my car, 7.4 miles from the start.

Here is a link to at topographic map of the hike:  LINK.

So, do I recommend this hike?  I will admit that there was a certain appeal to the hike because I was not sure where the trail would take me, and I have eliminated that uncertainty for the reader.  And I think a hike is a good one if it has an occasional view and gets my heartbeat up - others may seek more than that.  This is certainly not the first hike anyone should take in the area.  Nearby is one of the top ten hikes in the state, as compiled by Roanoke Appalachian Trail Club President Mike Vaughn (Link) - Fullers Rocks - which should be hiked first.  Also nearby is the James River Face Wilderness with 26 miles of trails - some really spectacular.  This hike presents a nice loop, however, with some unique visuals.  I plan on hiking it again during another season; just not during the week.

Check out my other blog postings here.

Update:  I led a group hike on this same loop on December 26, 2015.  With a group, the hike took somewhat longer, 3 hours, twenty minutes.  The Belle Cove Trail sign still exists, though a meeting with the USFS last January indicated they wanted to eliminate the notice, twenty years after the trail was washed out.  The Salt Log Gap Trail remains difficult to find for its first 100 feet from the Appalachian Trail.  There is an indentation in the ground indicating a trail to the east which heads to a campsite.  The trail is to the left of that campsite, and I again found it thanks to the sawed log mentioned in this post.
Posted by Jeff M at 8:41 AM