This is a description of an Appalachian Trail loop hike near Spy Rock in Central Virginia that few folks have probably ever taken.  Very few people will be encountered on these trails, so solitude is their main asset. There are no views.  But this is the only place you will find a description of a loop trail involving this part of the Appalachian Trail.  Otherwise, you will need to explore these A.T. miles by retracing your steps.  Click for Map.  If you want to check off this section of the A.T. in the most interesting way possible, this is the route to take.
Most of the miles of the Appalachian Trail in Northern and Central Virginia are pretty accessible.  In Shenandoah National Park, the trail never gets more than a few hundred yards from the Skyline Drive, and it similarly hugs close to the Blue Ridge Parkway for many of the Parkway's northernmost miles before separating at Reed's Gap near Wintergreen Ski Area and heading into the Three Ridges Wilderness.  Even the Three Ridges area seems pretty accessible - it certainly is popular.  And the big climb up The Priest sees a lot of traffic, as does the great vista from Spy Rock, which I have taken kids as young as 6 to climb.

South of Spy Rock, however, the trail seems a little more mysterious.  Though it heads southwest from Spy Rock and comes pretty close physically to the Blue Ridge Parkway, there is no longer any access from the Parkway. And while there is access to the popular trails in the Mount Pleasant National Scenic Area over Cole Mountain and Mt. Pleasant several A.T. trail miles to the south, the section between Spy Rock and Cole Mountain parking is relatively untrammeled.

Access.  Access to the area is best done via the Spy Rock Trail, a woods road behind the Montebello Fish Hatchery just off of Route 56, between Crabtree Falls and the Blue Ridge Parkway.  (N37 50.518 W79 07.866.) Here is a map and directions from Charlottesville: Map. There is a parking area here, and the road is very short but pretty bumpy.  After the parking area and walking past the gate, this road services several homes along the way up the mountain, but there is seldom any traffic behind the gate.  Care should be taken to follow the trail's blue blazes, as there are a couple of spots where the road changes direction and forks, leaving a newbie potentially confused.  Where the Spy Rock Trail meets the A.T., after about a mile of climbing, there is the Trail and an old woods road to the right.  Topo maps indicate that the old woods road is an older routing of the A.T., and it parallels the trail closely for about a quarter-mile.

1.1 Miles. Nearly every hiker heading up the "Spy Rock Trail" takes a left at this point onto the northbound A.T., heading to the Spy Rock view.  Spy Rock is near the top of the "must see" hikes in central Virginia's mountains. And I would never recommend this hike over a Spy Rock hike, though Spy Rock could be included in this hike - adding only a couple of miles.

Also contributing to the low number of hikers turning south on the A.T. is the fact that there aren't any views along the A.T. for a couple of trail miles to the south (Wolf Rocks). Nevertheless, this part of the trail has several interesting areas in addition to its wonderful seclusion, making it worth the effort to check out.  The virtually unknown trails paralleling the A.T. here create a pleasant 7.7 mile loop hike.

2.3 Miles. The trail and old road re-converge just before the trail reaches Porter's Field, an area that no longer merits that name as it isn't much of a field anymore.  But there are several good campsites in this area - in fact, camping here has been documented all the way back to 1749.  There is a reliable spring here that feeds into Mill Creek, which supplies water to the fish hatchery.  Also here is a trail that crosses the A.T. and was known as the "Railroad Trail" in an earlier version of the PATC Guide to Pedlar District Trails (2nd Edition).


This area is reputedly crisscrossed by many old railroad beds.  According to a source from the Natural Bridge Appalachian Trail Club (which maintains trails in this area), "There are lots of the old railroad routes in this area and elsewhere.  The railroads were temporary, and put in when there was extensive logging done just before and during the Chestnut blight infestation."  The first edition of the Appalachian Trail Guide to Central Virginia confirms this statement, stating that the "South River Lumber Company, of Cornwall, Va., built 57 miles of railroad track in an operation that extended from 1916 to 1938."

3.3 Miles.  Continuing south on the Appalachian Trail from Porter's Field, the Trail hugs the slope of nondescript Pond Mountain for just about a mile, crossing a spring, then reaching the access trail to the Seely-Woodworth Shelter.
3.4 Miles. The Seely-Woodworth Shelter was built in 1984, and I am betting that the A.T. was re-routed at that time to come closer to the shelter.  The shelter sleeps 8, and has both a nice privy (bring your own T.P.!), and a strong spring nearby.  It is a good place to stop for lunch.
3.5 Miles. Retracing your steps back to the A.T., follow the Lovingston Springs Trail straight ahead. The trail crosses a stream and then takes a hard left at a signpost, shown below.  You do not want to take this hard left.  Instead take a hard right.
3.7 Miles. The short trail section just hiked was probably completed at the same time as the shelter, as the trail to the left and right is an older alignment of the Appalachian Trail. It is shown as the A.T. alignment on the PATC's Map 13, 1st Revised Edition, dated 1975, but was gone from the 2nd Edition, dated 1985. Although the trail to the right is not blazed, it is still maintained (I saw several fresh cuts on downed trees), and its route is made clear from years of tramping by previous generations of A.T. hikers. I think it may be used by mountain bikes now, given some of the tracks I saw.
4.7 Miles. The trail takes you back to Porters Field, where you encounter a cross trail just before reaching the A.T. again.  Instead of going right to the A.T., take this trail left.  It is another old railroad bed, and is labeled on older versions of the PATC map as the "Railroad Trail" (described previously).

5.4 Miles. Taking the cross trail generally westward towards the Blue Ridge Parkway eventually leads to a gate after crossing a couple of springs.  At this gate there is a very nice sign telling hikers to please not trespass. (About 20 years ago, this trail was open - though overgrown - and I used it for access to this area from the Blue Ridge Parkway.) 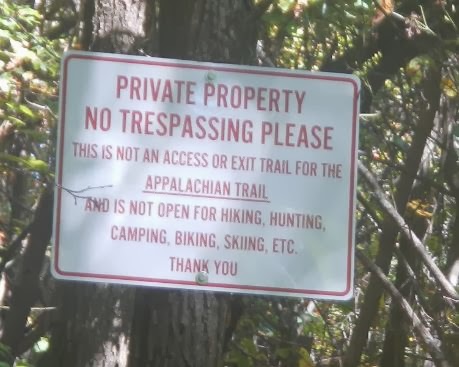 This gate is an important landmark, because a road meets right at that gate (on the legal side), that you will take back to the Spy Rock Trail, giving giving you a loop.  I do not recommend hiking the loop in the other direction, as it is difficult to describe how to find this trail from the Spy Rock Trail side.  On the current PATC Map 13, this trail is marked the "Boundary Line Trail."  Both the trail from Porters Field and this new trail are old rail beds, as shown on 1940 era topographic maps found on this website: Link.
This trail crosses a couple of couple of streams during a 1.5 mile, slow descent.  The trail drops about 235 feet over that mile-an-a-half, producing an overall grade of -3 percent before reaching a gate and leaving the National Forest. 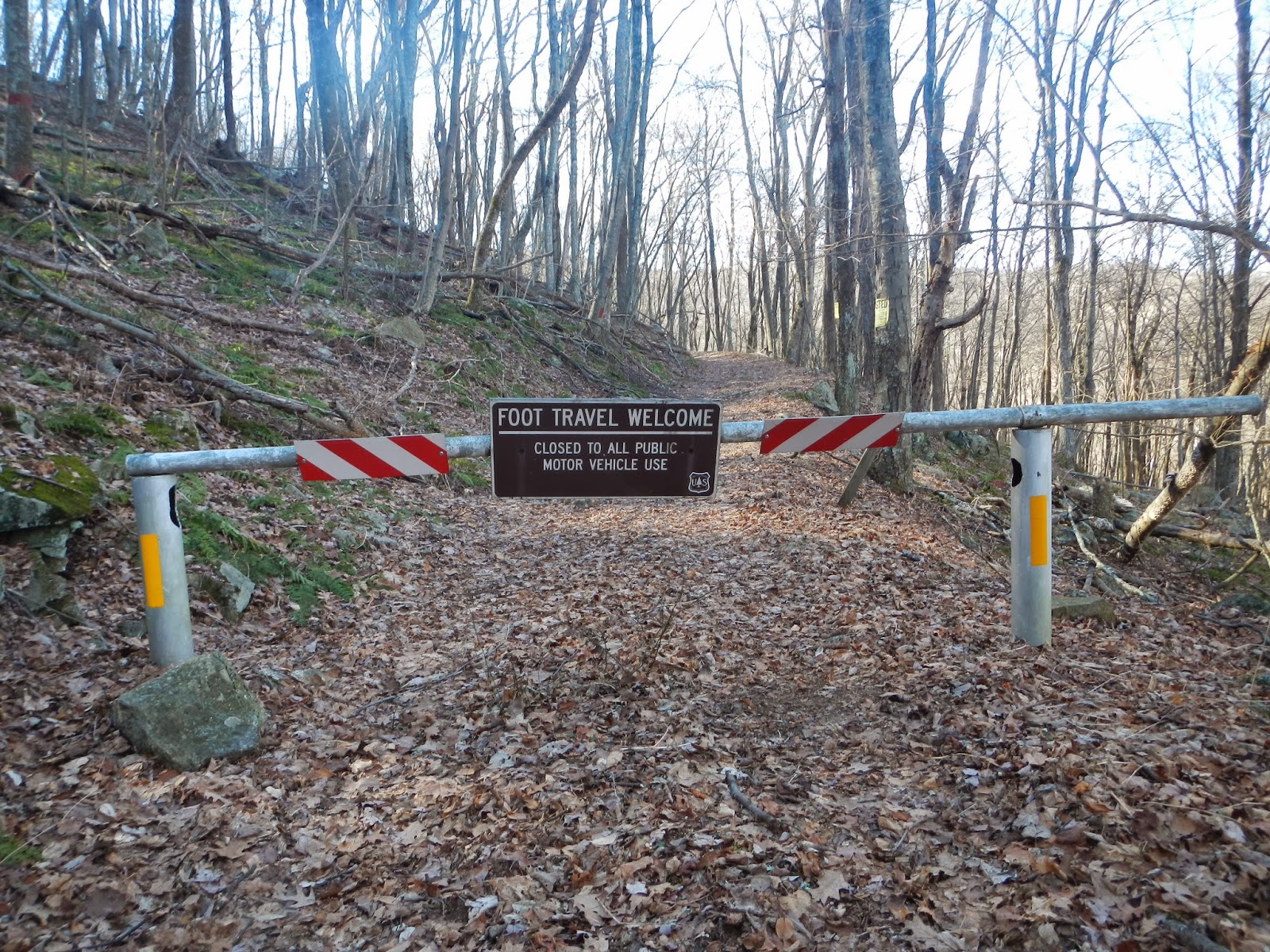 6.9 Miles. After passing the gate at 6.9 miles (all distances are approximate), the trail passes several property access roads.  For this reason, I do not recommend following the loop in the opposite direction even though the climb is more gradual - it is confusing to find your way to the gate pictured above.  I will give detailed directions at the end of this posting, in case you want to give it a try.  But my lawyer team advises me to tell you that you do so at your own risk, and I bear no responsibility for mistakes in directions!

To take the road from the SRT, head uphill on the SRT past the first convergence of roads, where the SRT takes a slight left turn.  Look for a yellow and blue sign that says "Koether." (Approximate coordinates:  N37 49.998 W79 07.852.)  The Spy Rock Trail goes to the left here; you will go right.  Several hundred yards later is a similar blue and yellow sign reading "Koether," again pointing right. This time, you will stay to the left.  This should take you to the gate shown above, with a slow climb to the shelter.

There are several trail maps that cover this area, including maps produced by Trails Illustrated (National Geographic), the Appalachian Trail Conference, and the Potomac Appalachian Trail Club.  All have some errors, but the best map is the PATC Map 13 - it is the only one showing all of the trails described above.

Disclaimer: This author is a member of the Potomac Appalachian Trail Club, volunteers for the Maps Committee, and originally sought out these trails in his capacity as such a volunteer. Nevertheless, it is my opinion that the PATC Map 13, while not perfect, is the best of several options for guiding hikers through the myriad trails of this part of the state.

Important Side Note:  This is one of those hikes you should not attempt during hunting season - on any day of the week.  Thanks to Virginia's state government, a new law passed this session allows for Sunday hunting on private property when the landowner's permission is obtained.  This hike adjoins much private property, and there are numerous additional land holdings surrounded by National Forest in this area.  As a result, it will no longer be safe for hikers and wildlife enthusiasts on Sundays in the late Autumn to enjoy areas like this.  I have no doubt that the DGIF and the hunter lobby isn't stopping there and will soon convince your representative to extend Sunday hunting to public lands in upcoming legislative sessions, effectively shutting out public lands to the "leave nothing but footprints" crowd during one of the best hiking times of the year. Please join me in registering your distress with the legislature at losing access to our hobby during a chunk of the year because others selfishly want every day of the week to pursue theirs.

Check out my other blog postings here.
Posted by Jeff M at 6:39 PM