I skipped my normal hike with the Roanoke ATC this week so I could catch up with my hiking friend Marit, with whom I hadn't hiked in a long time, but is a veteran of hikes with me on the Wild Oak Trail, the Jones Mountain Trail, and Ramsey's Draft, among others.  One of my hiking companions had wanted to hike 3 Ridges, but wanted to do it with others because she found it to be an intimidating hike.

I have hiked it several times, dating back to before its inclusion in the federal wilderness system. Most recently, I had hiked the A.T./Mau-Har Loop back in May of 2010, on a cool and overcast day.  (Description here.)  Three Ridges is probably the most remote and possibly the most beautiful hike easily accessible to Central Virginia.
Marit was hiking with her close friend and Pacific Crest Trail hiking partner, Mark, and with Barbara, who had never hiked this section before.  We dropped a car at Reid's Gap on the Blue Ridge Parkway near Wintergreen Ski Resort, and then left my car at the parking area on Route 56 near Crabtree Falls.  I left it open whether I would hike with them the entire way back to Reid's Gap or return to my car via the Mau-Har Trail, as I had done in June, 2010.   Though I needed to get back to Charlottesville by 4:30 to get my son to a baseball game, I figured I could do this since the last time I had done the 13 mile loop in 5 hours and 12 minutes.
We started on the trail at 8:20 and were quickly over the swinging suspension bridge crossing the Tye River. But we had a glitch nearly right away.  Marit realized by 8:33 that she had left her keys in my car, and needed to return to get them.  Barbara and I waited on the trail and talked pros and cons of different types of trekking poles while Marit and Mark returned to the car.  We were moving again by 8:55.

We saw another hiker Marit knew - a guy who sometimes hikes with the PATC, and a father with his two young daughters, taking them out on their first overnight backpack.  And, an hour after restarting our hike, we reached the Harper's Creek A.T. shelter.  The area has some really nice campsites - tremendous for boy scout troops as they are far away from the shelter and shielded by a noisy stream.  I hope to get my son's troop out here in the next few months.

Unfortunately, a recent shelter user had left the area around the shelter completely trashed.  there was food left all over the floor of the shelter and on the picnic table, and an opened can of chicken left in the fire pit.  This person had to have been a very recent visitor, as I don't think the animals would have left this food very long.

While I pondered how karma would plot revenge on this vile person, Mark set about cleaning up the mess.  This is a passion of his, as he told me about bringing out large bags of garbage while on his A.T. through hike several years back.  Mark believes in setting the proper example, as the trail belongs to all of us.  I lean more towards implementing an iron brand with the Leave No Trace logo on the ass of anyone I come across who performs such acts. 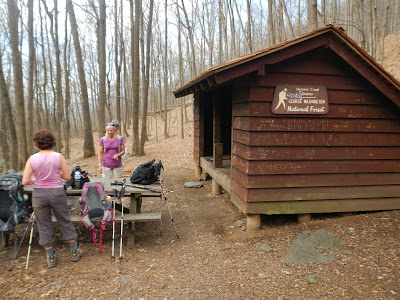 Because Barbara was worried about how easily she could climb Three Ridges, and I needed to make time in order to get back to Charlottesville, we split into two groups to ascend the mountain.  From the Harper's Creek Shelter, at 1860 feet elevation, we ascended 2100 feet to the top of Three Ridges over 3.5 trail miles.

Mark and I spent much of our time talking about his experience as a Boy Scout Scoutmaster in Florida, and how he believes that setting the example by cleaning up along the trail "pays it forward" and encourages others to make the same efforts.

Including stops, it took 2 hours and 21 minutes to the top from the shelter.  We stopped several times for photos and to re-hydrate.  It was hot - probably in the 80's, and the views were incredible and meant to be savored.
Despite the heat (or maybe because of it), the hike was a humbling experience.  When I last hiked this section of trail three years ago, I hiked a 13 mile loop in 5 hours and 12 minutes on a cool, overcast late May day not conducive to stopping at overlooks.  I don't have the GPS data from the previous hike so I cannot compare individual sections, but I know I did not feel the muscle soreness near the top of the mountain that I felt this time.

As a result, I decided to hike the shorter hike using a car drop, remembering that looping back to the start via the Mau-Har Trail is longer and involves a steep uphill climb a couple of miles down the trail.
My hope was that the shorter hike and car shuttle would get me back in time to take my son to his baseball game.  No such luck.  We finished our 11.2 mile hike at 3:15, which was nearly 7 hours after our 8:20 AM start, with almost exactly 5 hours spent hiking.  When moving, we probably didn't go a lot slower than my previous hike pace (13 miles in 5 hours, 20 minutes), but the heat contributed to additional stops. 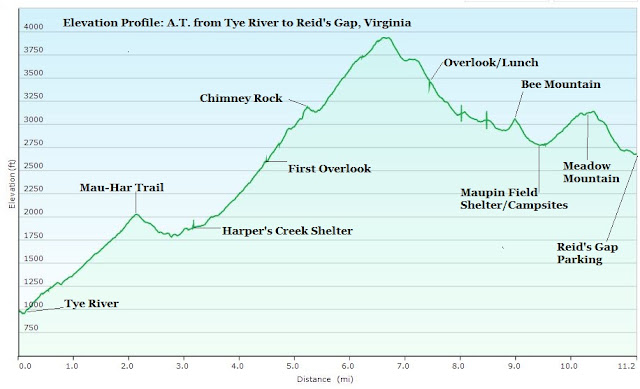 For those who want to experience some of Three Ridges Wilderness without the tough climb, perhaps with younger hikers, there is a relatively unknown way to do this in a pretty easy manner.  Taking the Blue Ridge Parkway south from Reid's Gap to Love Gap, a spot which is signed on the BRP, a hiker can take an old road east to the Maupin Field Shelter.  I wouldn't do this without the A.T. Map that accompanies the Central Virginia Guide, the Trails Illustrated Map #789, or PATC Map #12. (Generally, the PATC map contains the best detail, but the latest version of the map also shows some stray roads in Three Ridges that do not exist.  I still recommend it for the best detail of this area.)  This road meets the Maupin Field campsites near the kiosk shown above after 1.5 relatively flat miles - you can see a trail sign describing the road in the photo above.  From Maupin, it is 2.1 trail miles and an 850 foot ascent, first over Bee Mountain, then up part of Three Ridges to Hanging Rock, site of the vistas we experienced at lunch and the photos above.  The hike would be a total of 7.1 realtively easy miles.  And the views are well worth it! 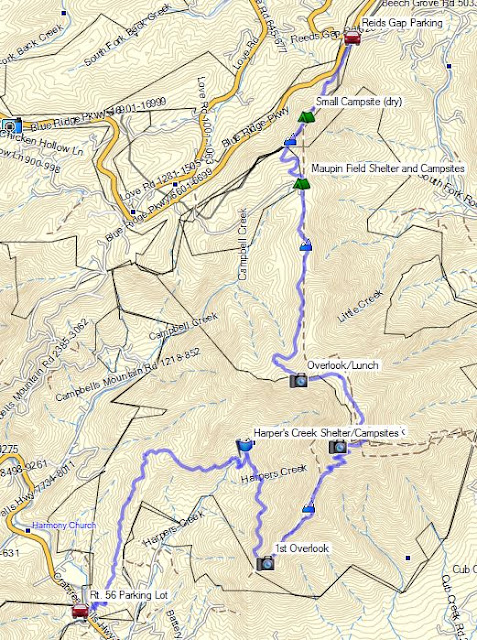