Appalachian Trail over Humpback Mountain with the Boy Scouts

April 6th was a perfect hiking day, with blue skies, temperatures in the 50's, and a slight breeze.  Perhaps that explains the best turnout ever for any of the series of Appalachian Trail hikes I have been leading for my son's Boy Scout troop.  Joining us were 19 scouts (including one from another troop in Maryland) and 10 adults. One of the adults was a last minute addition, because he said his wife told him he needed to get more exercise.

Troop 1028 hikes consecutive sections of the A.T. every other month, and April was our third hike in this series.

Or maybe the turnout was because the April hike was shorter than our usual 10 mile length.  We need to go ten in order to qualify for Hiking Merit Badge.  This month's shorter hike was  used instead to qualify our newer scouts for a Second Class Rank Requirement, which reads as follows:

Scoutmaster Pete had those guys taking coordinates of many landmarks along the way!

We started out at the Humpback Rocks Parking Area, which is on the Blue Ridge Parkway about five miles south of where the BRP meets Shenandoah National Park's Skyline Drive.  The name of the parking area refers to the destination rocks, which are high on Humpback Mountain and are undoubtedly the top hiking attraction in the area.  The A.T. went through the parking lot until about 10 years ago, when the trail maintaining organization rerouted the path further east, away from the crowds accessing the trails to these rocks and their views.

As a result, we hiked the old Howardsville Turnpike to the A.T. then climbed Humpback Mountain on the A.T.  The old A.T. route takes a fit hiker up to the rocks in about 20 minutes, but it is very steep.  The new route is considerably longer and mellower up the mountain.  Our scouts chose to detour off of the A.T. so they could experience the rocks (a steep downhill from the A.T.), and the photos here come from that spot.  It took us 3.6 miles of hiking to get to the rocks on the A.T.

After a break, we continued south on the A.T.  The best view was across a valley to the Wintergreen Ski Area which, on April 6th, was experiencing its final day of skiing for the season.  Wintergreen had both the latest opening and the latest closing in its history, which should tell you how bizarre this past winter has been in Virginia. 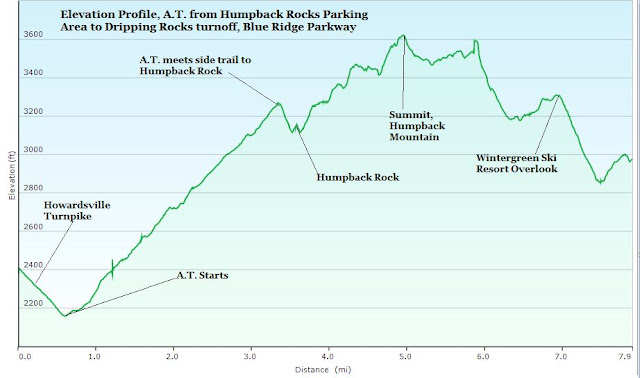 We passed our original stopping point, the Humpback Picnic Area, because it was gated.  But I recounted to everyone who would listen my memory of that spot when I first hiked this part of the trail, nearly 20 years ago.  I didn't want to do an out-and-back hike, and this trail is not a part of any loop trails.  So I backpacked my Rollerblades and skated down the Blue Ridge Parkway back to the car.  But I didn't research it very well, and discovered just how steep the BRP can be.  Flying down the road on my Rollerblades, I thought for sure I was going to kill myself.  I ended up buying a new brake after that 3 mile journey.  Never again!

We ended where the A.T. crosses the BRP at Dripping Rocks, virtually in the backyard of a Wintergreen condo.  Our next section will be the A.T. from here past Reed's Gap to the Maupin Field Shelter, before we take an old road out to the BRP.  Then the boys have to contend with Three Ridges, and then the Priest.  These guys have no idea what they are in for!