Had the time today to take a quick training hike up the Appalachian Trail to summit The Priest.  I had last done this hike in June, 2010 when I did it twice in one day training for the Half Dome hike.  This time my friend Marit and I had time to do it once. 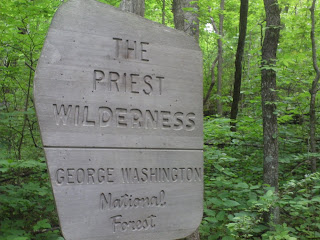 I chose this as our training hike for our separate summer activities because it is a good workout, climbing from 1000 feet to over 4000 feet, and it is on the Appalachian Trail.  When I had completed another nearby section of the A.T. last week, I ran into several thru-hikers.  Marit hiked the entire A.T. back in 2009, and I figured she'd enjoy talking to some members of this year's class.

The trailhead is just down the road from the Crabtree Falls trailhead, which is a 5 star hike for many folks in Charlottesville.  It takes about an hour to get there, driving past the turnoff for the Wintergreen Ski Area.  Here is the quickest way there from Charlottesville:  Map.

The last time I hiked this, I was on the trail around 8:30 and back down by noon.  We got there a little later today, and the parking lot was really rutted, so I had to be careful parking the car.

Marit left some "trail magic" at the trailhead for the thru-hikers.  In this case, trail magic was a ziploc bag full of Starburst and Hersey's candies, and a gallon jug of water. 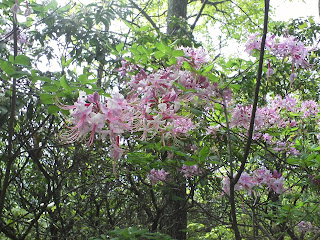 For the first couple of miles, we were kind of worried we wouldn't run into anybody.  The folks staying at The Priest Shelter could have already passed by, and those who stayed at the more distant Seely-Woodworth Shelter (on the other side of Spy Rock) wouldn't have reached this part of the trail yet.   So we enjoyed the flowers (which were very different than the ones I saw last year in early June) and trucked up the trail.

Gracie the dog came with us, and I kept her on leash for much of the lower elevations.  There was abundant poison ivy off the trail, and I wanted to make sure she was under control.  She fell into a good pace behind me, though she clearly would have rather run free.  When we got about 2500 feet the forest understory seemed to clear out, and I let her off leash.  After getting her "ya ya's" out (as Marit called it), she again fell into lock step behind me, despite the lack of a leash. 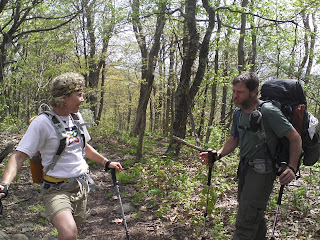 We ran into our first through hiker, "Blue Sky" at the overlook about 2/3 up the mountain.  Mysteriously, he is living in California, but chose to come to the Appalachians to hike. He wouldn't be the first we'd meet today with that background. After that, we interacted with a number of section hikers or thru-hikers.  I took one photo of Marit talking to a hiker from New Hampshire who called himself "Earl Gray."  Earl told us he was looking forward to getting to Waynesboro where he would meet up with his wife.

When we reached the top of The Priest, we turned around.  There is no spectacular overlook up there, so one just has to decide, "this is the spot to turn around."  We could have kept going to the shelter, but we didn't see the point. 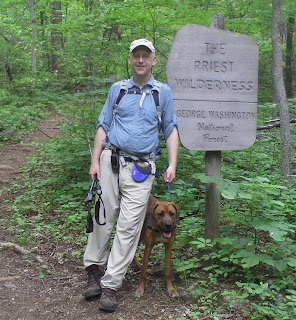 We started at 8:50 AM and ended at 12:40 PM, so the trail overall took us 3 hours and 50 minutes.  When I hiked it last year, the first time up took me 3 hours and 38 minutes.  No doubt we were slowed down this time by talking to the folks we encountered!  Total distance was 6.9 miles.  Total elevation gain was about 3000 feet.  A good morning workout!
Posted by Jeff M at 2:36 PM