There is nothing finer than a beautiful Autumn day in the mountains.  I used my off day on October 16th to hike a section of the Appalachian Trail near Lynchburg and came across 20 different folks out doing the same thing.  On a Tuesday!  I almost never see people on my mid-week hikes, and this time I saw so many that I had to go back in my memory and count them up. 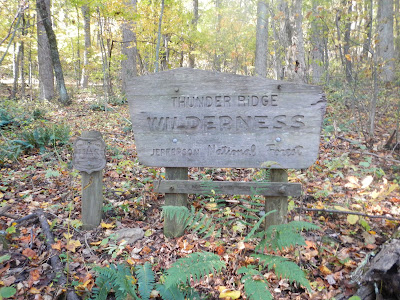 The hike started at Petite's Gap on the Blue Ridge Parkway.  This is about 5 miles south of the BRP's crossing of the James River.  I parked just off the BRP on a road that splits the James River Face Wilderness from the Thunder Ridge Wilderness, at about 2400 feet elevation. Heading south on the A.T., I was immediately in the Thunder Ridge boundary, and climbed to almost 3700 feet elevation in just over 2 trail miles.

Climbing the A.T. southbound from Petites Gap, I passed a small spring and a relatively flat, swampy looking area.  My A.T. Trail guide from 1994 states that this is the site of a cabin inhabited by a man that legend stated was a murderer who fled "from justice" after the Civil War.  There is no evidence of a cabin there now, though the guide states that the cabin existed when the A.T. Was first routed through the area.

The trail climbs over about the next 3 miles until it reaches the Thunder Hill Overlook of the Blue Ridge Parkway.  Here there is a split in the trail.  Going left takes you through the BRP parking lot (with trash cans), and right goes by a nice stone overlook that looks out over the valley to the west.  Both times I passed this overlook there were people there, so I cannot vouch for the view, but the stonework looked very nice.  (On the second pass, I encountered a through hiker taking a cigarette break - not something I often see!) 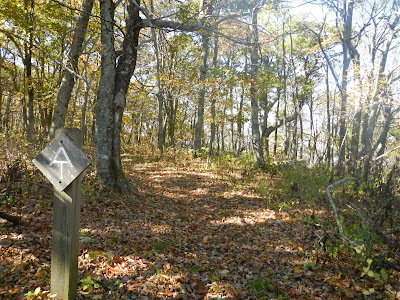 From this point, the trail drops again before crossing the Blue Ridge Parkway, at BRP mile 74.9.  I have driven this part of the Parkway before, but never noticed the A.T. crossing; it is not very obvious.  A few feet after the crossing, the Hunting Creek Trail splits off and heads east down the mountain.  There is a steep climb, then the trail levels off before coming to the Thunder Hill Shelter after another mile.  The Thunder Hill Shelter was built about 50 years ago, just like the next 5 shelters to the north and the Cornelius Creek Shelter to the south.

The shelter's privy, however, is another story.  It appears to be only a few months old, though I didn't walk over to check it too closely.

At this point, I was five miles into my hike, crossing the Blue Ridge Parkway a second time, and wondering if I would experience the two highlights of this part of the trail.  I needn't have worried, as after a slight downhill drop and another half mile of trail, I came across the famous Guillotine.  The Guillotine is a large rock boulder suspended of the trail in a narrow rock canyon.  It requires a slight swallow and no small amount of courage to pass through.  And in my case, it also required a little bit of muscle to bring a tricking dog through with me.

It is a justly famous spot though, as it is so impressive!  I imagine the original A.T. was laid out specifically to pass through this spot, as there is a downhill southbound to get here, then a steep uphill to get up to Apple Orchard Mountain.  The folks maintaining the trail here have done a fantastic job laying rock to form steps up the mountain,  this section exhibits true craftsmanship that must be seen and appreciated.

Continuing on southbound on the A.T., I ascended to the top of Apple Orchard Mountain, next to an FAA relay station.  Apple Orchard Mountain is the highest point on the A.T. for 1200 miles of trail.  Heading north, a thru-hiker will not again ascend this high until the edge of the White Mountains in New Hampshire.  Nothing in Shenandoah National Park is this high.  Nothing in the next 8 states to the north reaches this height.

Appropriately, I met Dreamcatcher and Spartan here, a couple of Sobos (southbound thru-hikers) heading for Georgia.  Spartan told me that they were from Colorado and were excited to experience the Bryant Ridge Shelter that night.  Spartan took a photo of the dog and me at the top of the mountain, and when I offered to reciprocate, he pulled out a large digital SLR from his backpack and told me that good photos were a very important part of his trip.  They would have to be, to carry that much extra weight!

I left them at the top of the mountain, but knew I would run into them again because I was turning back at Parker's Gap Road, a little over a mile further south.  I descended the mountain, touched the road (which I had hiked to on the A.T. from the south a few months ago), them turned around heading north.  It isn't the most efficient way to hike the Appalachian Trail, but it got me back home in time for my son's baseball game at 6 that night.

Heading back north, I was surprised not to encounter Spartan and Dreamcatcher fairly quickly.  But they were quite a ways behind me and I found them near the top of the mountain where we had first met.  They explained that they had experienced "trail magic," where a non-hiker offers assistance or food to a thru-hiker.  An FAA employee had given each of them bottles of Vitamin Water.

I stopped at the top of Apple Orchard Mountain for lunch and was approached by the same man, who insisted on giving me a bottle of Vitamin Water and a bottle of regular water for the dog, even though I told him I was only out for a day hike.  I think he really enjoyed offering treats.

As stated earlier, over the entire 14 mile trek I encountered 20 other hikers, which is amazing on a Tuesday.  I almost never see folks out hiking during the week, but this was near the peak of the Autumn leaves and the views were spectacular.  It was great to see so many folks out getting exercise and enjoying the trail.  I don't think any of them would disagree that this was a great way to spend a beautiful day.