The Cub Scouts headed east towards Richmond the last weekend in March for an earlier-than-usual campout. As a hedge against volatile March weather, the Pack Committee agreed that we would stay in two Yurts provided by the Richmond Council at their summer camp facility in Goochland County. The boys that wanted to camp could do so, but the less experienced Scouts (and their families) could stay in one of the Yurts.  At least that was the thinking... 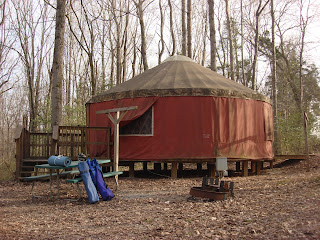 Wikipedia defines a Yurt as "a portable, felt-covered, wood lattice-framed dwelling structure traditionally used by nomads in the steppes of Central Asia. A yurt is... more home-like in shape and build, with thicker walls than that of a tent. They are popular amongst nomads."

The Family Camping Blog, in its article, "What to do if your spouse won't camp" recommends starting the family out in a Yurt.  Not this yurt. Not this weekend.

Our yurt consisted of a round wooden floor, canvas walls, 2 wood doors, a skylight with ceiling fan, and 8 double bunks with a capacity of 16. 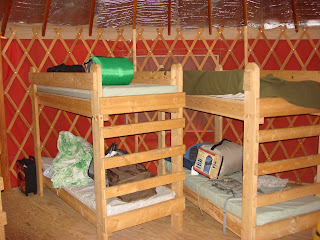 Nobody was camping because lows dipped into the 20s overnight, with a nearly full moon.   I was overnight Men's Yurt guest number seventeen; the odd man out without a bunk.  I got two mattresses from the women's yurt and slept on the floor.  I believe it was below freezing inside the yurt.  I had a North Face winter down mummy bag.  I put Will in a 3 season mummy bag that was placed in an old 3 season cotton sleeping bag.

The group made it through the night thanks to some creative layering by the adult leaders.  One boy showed up with a "Cars" sleeping bag, which wasn't going to hack it this night.  Another had a mummy bag with a broken zipper.

But everyone had a great time and we took the boys on a 2.5 mile hike the next morning.  I was glad it was still March, because we used the official camp map and found that one trail listed (and taken) goes through a "do not enter" zone behind the rifle range.  Why keep that trail on the map?
Posted by Jeff M at 7:10 PM