The Glass House is connected to a series of trails on the north side of Massanutten.  The connecting trail, known as the Sidewinder Trail, is the only pink blazed trail I've ever seen.  It is in good shape, though the blazes were erased (the bark on the trees where the blazes had been were literally painted brown) for the first half of the trail.  After approximately a mile, the Sidewinder Trail crosses a road and the blazes appear on the trail. 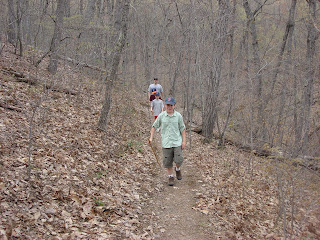 The day we arrived, Brian and I took the boys on an out-and-back on the Sidewinder Trail, hoping to get to the top of the ridge to get cell service.  We didn't make it that far, but made it to where the Sidewinder Trail ends at the Bearwallow Trail before turning back for a 3 and a half mile journey.

The next day, Brian and I set out again just after 7 AM to get to one of the trails on the ridge.  I was drawn to the Meneka Peak Trail because a brand-new-yet-to-be-found geocache had been placed up there by some folks behind a hiking website I use a lot, the folks at hikingupward.com.  Hikingupward is a great resource for Virginia hikes and I have recommended it to several other hikers in Charlottesville.  They offered an additional incentive to find their geocache first: a hikingupward tee shirt. 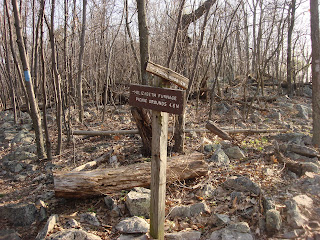 There were numerous great views at the top of Meneka Peak, our highest point on our hike.  And this trail belies the thinking that ridgetop trails are somehow less challenging than trails heading up the mountain.  The Meneka Peak Trail was tough going in sections due to the challenge of sidestepping the many rocks along the trail. 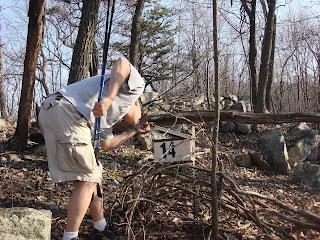 We encountered one curious item along the Meneka Peak Trail.  It was an old ammo box painted white with the number "14" on the side.  We wondered what that was all about!  There was nothing inside, however, and no clues elsewhere.

We did not come upon the Meneka Peak Geocache until after leaving the trail of the same name and heading back downhill on the Signal Knob Trail.  But we were the first ones to find the geocache, and I got the tee shirt.  I'll probably never wear it because it was a medium sized shirt, but it was a great prize anyway.  The geocache was 5.1 miles from the Glass House.  If it had been on the Meneka Peak Trail, we probably would have gone back the way we came.  Because we were closer to Signal Knob, however, we instead took the Signal Knob Trail back to the valley and walked the road from the National Forest Picnic Area to the Glass House. 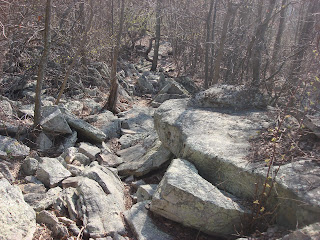 On the way back down, we stopped at a couple of overlooks, including one that I had reached two years ago when staying at the Glass House.  There was another geocache at this spot, and it was one that I could not find when I visited before.  Brian found it almost as soon as I said there was a geocache close by.  I guess it really does help to have two sets of eyes sometimes. As we descended from the last overlook we came across two other sets of hikers. The first was a pair of college aged females, and the second a couple of older fellows including one with a limp. 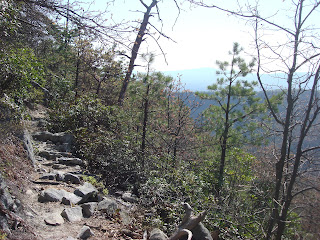 I did not ask the first set where they were going, as they looked like they were interested in getting some trail between us and them.  The older fellows were heading up to Signal Knob - a surprise because one walked with a pronounced limp.

By the time I got home another pair of searchers had posted for the geocache, and I think these guys were our competition.  I was glad we were on the trail shortly after 7 that morning.

We returned to the Glass House after a walk along the Fort Road.  Our entire trip totaled 10.2 miles, which means that the geocache was at the exact half way point of our hike.  It didn't matter which way we returned.