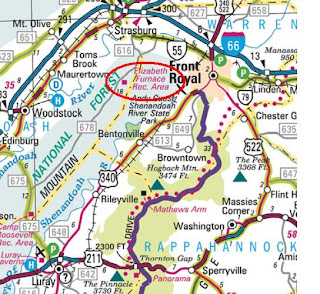 Our family spent a couple of nights during Spring Break at a Potomac Appalachian Trail Club cabin in the Massanutten Range, in the Lee District of George Washington National Forest, near the Elizabeth Furnace Recreation Area and Front Royal.  We were there with another family; friends whose children also had Spring Break this week.  This is the third year in a row that I've taken my son to a cabin during Spring Break, though it is the first year my wife came along.  Two years ago I took Will and a buddy of his to this cozy cabin.  I took better photos of the place back then.  Here are a few to give you the flavor of the cabin.
From a hiking standpoint, Massanutten has never been of much interest to me despite its proximity, as I always have assumed that the trails would not be very interesting.  I may reassess that decision after this stay.  I figure I am doing well on a trip of this type if I get one good hike out of the three days spent in the woods.  I got that and will report on it separately.
I took a couple of "last chance" books with me to the cabin.  This was down time - if I don't pick at least one of them up at this cabin, they probably aren't worth keeping anymore.  The cabin has electricity, but there's no cell service, no internet, no television.  It is a great place to take a ten year old during Spring Break, because it instead has plenty of woods, sticks, running streams, and hiking trails.  And it has a fabulous screened porch looking out on the Fort Valley.

I didn't get to any of my books.  Instead, I spent all my reading time pouring over an out-of-print book on the shelf in the cabin:  Geology Explained in Virginia's Fort Valley and Massanutten Mountains, a book I'd spent some time with two years ago at my previous Glass House visit.  I have always had an interest in Massanutten geology because, without really knowing a lick of geology, I have always maintained that Massanutten is of completely different origins than the Blue Ridge Mountains of Shenandoah National Park.  While the Blue Ridge is a series of bumps, Massanutten is like the mountains west of Staunton and in Pennsylvania- folds in the topography.  It is very apparent from Interstate 81 heading north towards Pennsylvania. It would seem that once you get on top of one, you should be able to walk for miles with very little elevation change.  I recently bought a book, Roadside Geology of Virginia, to help me determine whether this is correct.

Apparently, Massanutten is a great geological classroom.  The mountain range (it is a series of mountains, even though it looks like just a single mountain from Interstate 81) is the subject of an annual geology course at Northern Virginia Community College.  (Complete with prerequisite online readings.)  And it has been the subject of  Ph.D theses on geology dating back to at least 1896, including this one.
Geology Explained tells me that the mountains are made up of Massanutten Sandstone, which is harder and more resistant to erosion than the surrounding rock types.  (I had always thought that sandstone was softer than other rocks.)  "Prominent linear ridges in the Appalachians from Pennsylvania to Tennessee have the same origin."  To the west, the sandstone becomes Tuscorora Sandstone, such as Seneca Rocks in West Virginia (the only peak in the eastern United States accessible only through use of technical climbing gear).  "The A.T to the east is on much older rocks such as the Pedlar formation."

So Massanutten is separate geologically from the Blue Ridge.  On the other hand, it is not really upturned folds in the landscape but a synclinorium - a downturned fold in which the higher elevations have eroded away.
Posted by Jeff M at 10:37 PM