Hiking the AT over Burkes Garden - without backpacking

I am providing guidance for a small group of folks who have a goal to finish the AT in Virginia.  Some of these folks are not backpackers.  Although we may backpack at some point, we haven’t stared doing it yet, and – as of this writing – the group has hiked 40 segments of the Virginia AT and completed over 388 miles of the 550+ Virginia AT.  We stared in June of 2019, and hike on weekends when the three main folks (including me) are available.

For a long time, day hikes were easy.  But as the unhiked portions of trail have gotten increasingly far from our Charlottesville homes, planning has become more of a challenge.

The single hardest section to plan for in all of Virginia, in my opinion, is the AT where it crosses Burkes Garden, in SW Virginia north of Wytheville and south of Tazewell.  The only road access to center portions of the hike is a treacherous, windy dirt road with steep dropoffs, and I wanted to do this section without long drives between trailheads.  Below is the plan I developed, which worked really well.

Day 1: Left Charlottesville early morning. We then dropped Car One (a Ford sedan) where the AT crosses Virginia Rt 42, near Ceres, Virginia (Map).  We dropped extra gear into the Ford and took only our dayhiking gear with us.

We then drove back in Car Two (a Toyota 4Runner) back towards Bland a short distance to “downtown” Ceres, and drove north on Virginia Rt 625, Poor Valley Road.  Virginia 625 was a road better suited for a 4Runner than a Ford sedan.  We climbed up over and dropped back down into the Poor Valley, where there were a number of houses pretty much right on the road. We drove 8 miles off of 42 to the AT crossing and a small parking area.  It took a long time to get there – probably close to a half hour.  The trailhead is on Google maps as “Appalachian Trail – Chestnut Ridge Trailhead.”  (Map).

At this parking area, we left the 4Runner, which stayed there until the end of our trip.  I was a little worried about leaving a car in such a remote location for a couple of days, but we ended up having no trouble.

We then hiked southbound on the AT a distance of 6.8 miles – a good amount because we had a 3 hour drive from Charlottesville to get here.  The hike featured an ascent of 1700 feet, and a descent of 2050 feet.  It took our group 4 hours going southbound through wonderful fall foliage. 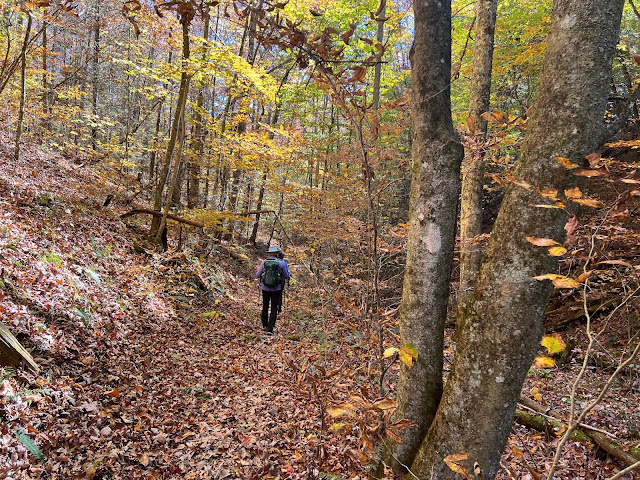 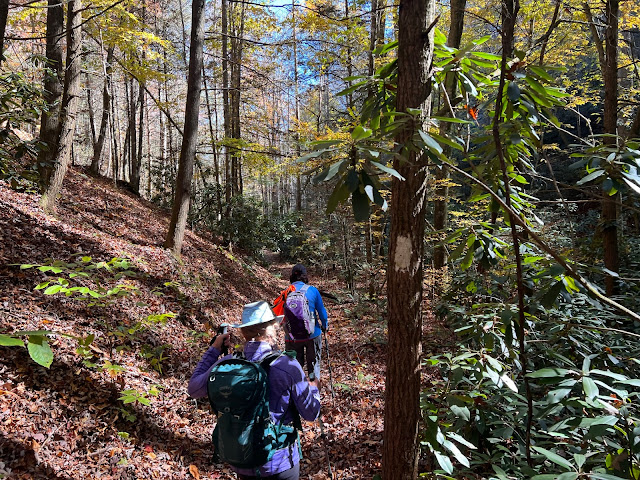 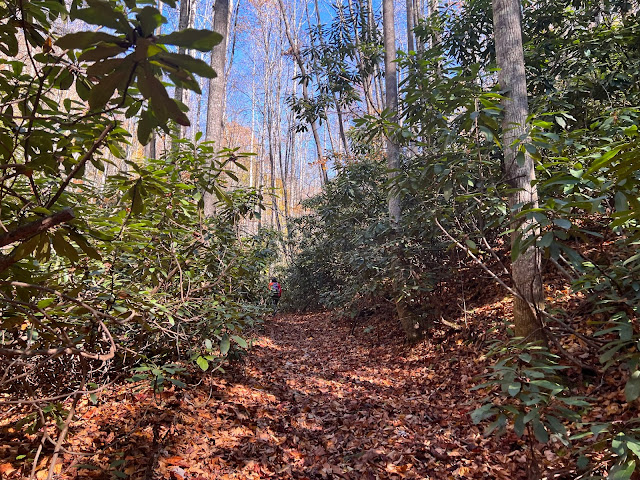 When we hiked this, a bridge was out over one of the streams we had to cross.  I did not have any issue hopping some logs, but others chose to wade barefoot.  We completed the hike by reaching the Ford Sedan at Rt 42.  We all then took the Ford Sedan back to Bland and spent Saturday night staying at the Big Walker Motel. 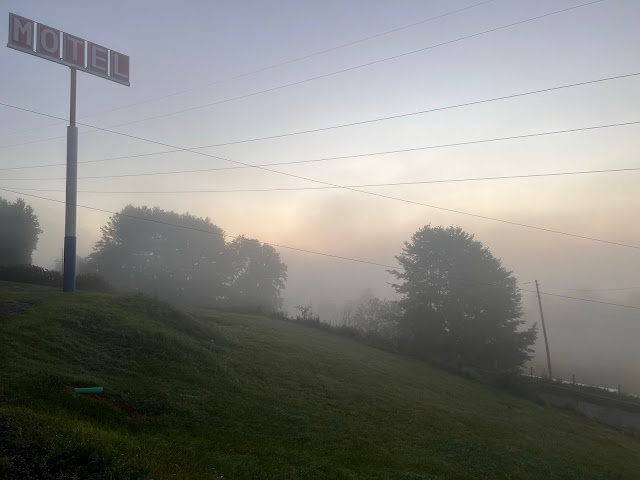 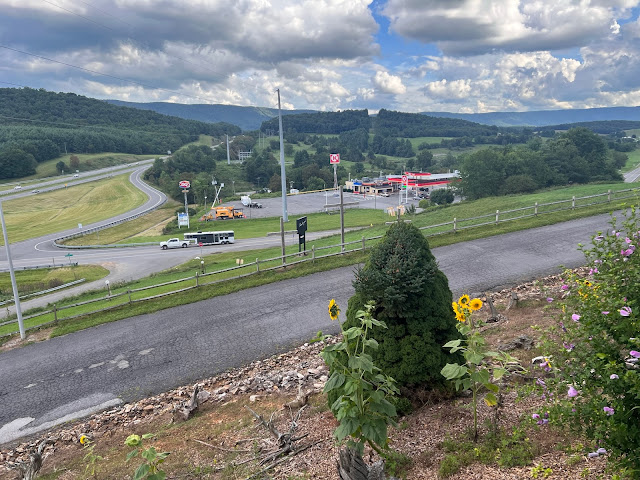 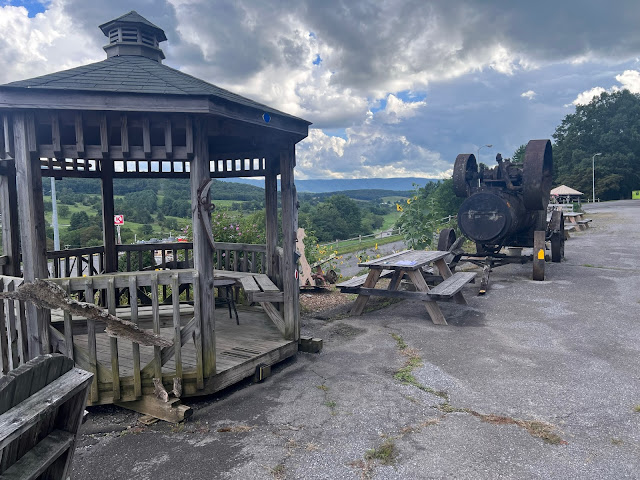 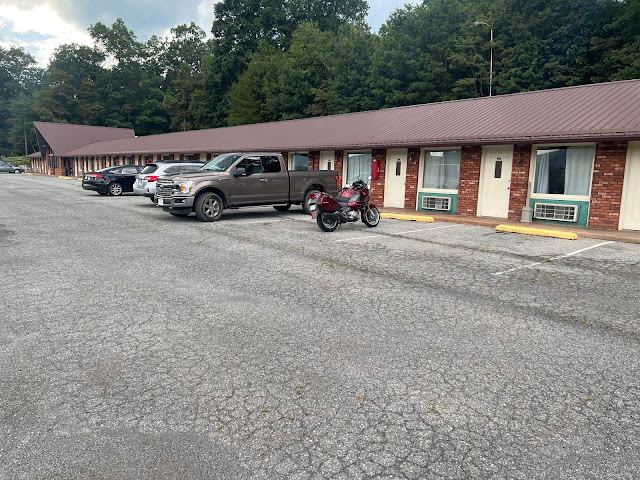 Day 2: This was the Big Day of Hiking – we ascended on the AT to Burkes Garden and stayed overnight in the Burkes Garden Hostel.  We drive our only vehicle – the Ford sedan - to a parking lot on Suiter Road just past the AT crossing and footbridge. (Map). This is about 15 minutes from the Big Walker Motel and about 20 trail miles north of where we left the 4Runner the previous day.  We parked the Ford Sedan here and hiked southbound over a bridge crossing of a small river.  We needed bigger packs than a normal dayhike because we would need to bring two days of food. 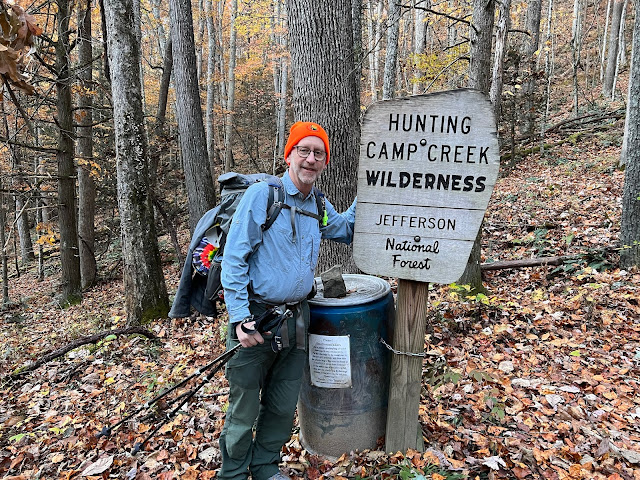 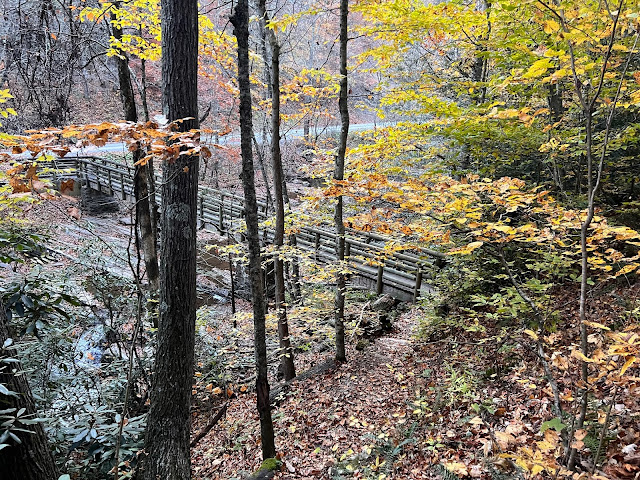 At the beginning of this hike, you start climbing almost immediately.  There used to be another trail in here somewhere (I’ve never found it for sure) that followed a streambed and was the “low water” AT.  The route I’ve always taken here (this is at least my 3rd time here) is the former “high water” AT.  It is now the full time AT and I could not find evidence of the previous alignment.  After about a 650 foot climb, the trail levels off and you pass a bench constructed by PATH – the Piedmont Area Trail Hikers – which maintains the AT through this part of Virginia.  There used to be a side trail back down to the road here, but it looks like it is no longer maintained.

From the 1 mile mark to the 3.1 mile mark, the trail stayed mostly level and was a delight to travel.  The next 1.2 miles after that dropped in elevation 750 feet, descending to Jenkins Shelter and a crossing of Hunting Camp Creek.  We stopped at the Jenkins Shelter and met a couple of southbound hikers who would also end up staying at the hostel that night.

The tough part of the hike was between about Mile 3 and Mile 7.2, where we climbed 1750 feet.  After that we hiked along a ridge with relatively minor ups and downs, though they were still tough when tired.  We crossed one road with a small parking area – one of two routes into Burkes Garden.  This was at about the 9 mile mark, a little after a side trail to the Davis Farm campsite, which we did not visit.  The campsite was too far off the trail to explore on a long hiking day, even though there is supposed to be a nice view there. 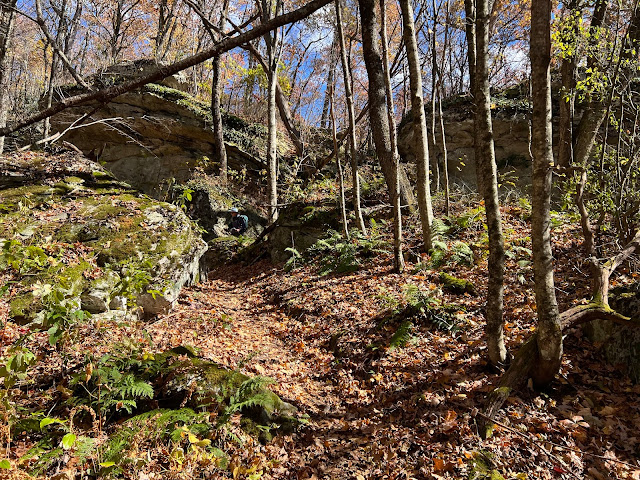 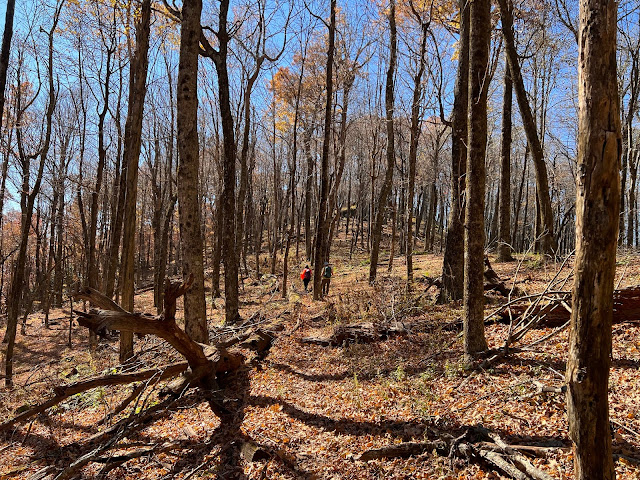 We continued on to Walker Gap, where we crossed a road then landed in a small parking area.  The parking area surprised me, because I did not remember it from my last hike through here, and I had always read that there was no road access to the AT here.  Although past the point where the State maintains roads, the road was in good shape and could provide a shuttle option for other hikers.  It is a little confusing in here – cross the road a keep going, then come to the parking lot. 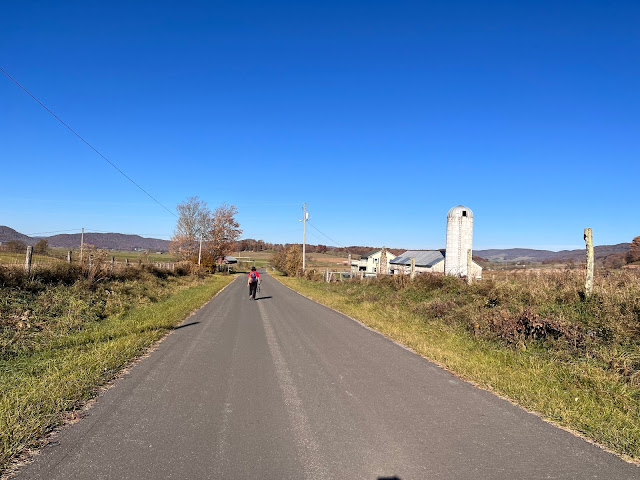 From the parking lot, we descended 300 feet over 0.8 miles until coming to the Burkes Garden Hostel, which is part of the farm on the right in the photo above.  This hostel was new in 2022 and was a delight to experience.  There were three other hikers staying in the hostel - the two we met that morning and a northbounder who started out camping but ended up in the hostel after the dew outside started building up.  I enjoyed my time with each of them.  The two women in my group each rented rooms in the main house, but I opted for the more Spartan accommodations in an old barn, where there were a dozen or so mattresses on the floor up in the loft.  I was plenty warm due to extensive insulation.

The owner was a whirlwind!  A very social person, she is also handy with a saw and built the accommodations herself.  An amazing amount of work must have gone into this facility.  I thought that staying here was a bargain.

One bonus at the hostel was very good wifi.  The owner said that all of Burkes Garden has premium access because one of the residents used to work for a communications firm and he applied for grants to upgrade the area.  She said that internet inside the bowl that is Burkes Garden is much better than anything that surrounds it, even in the town of Tazewell. 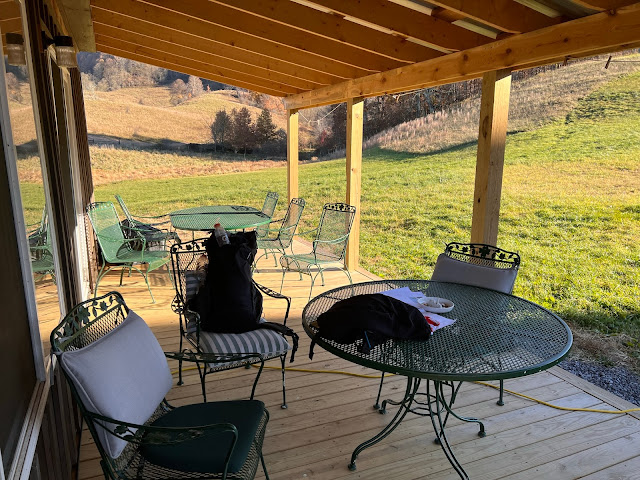 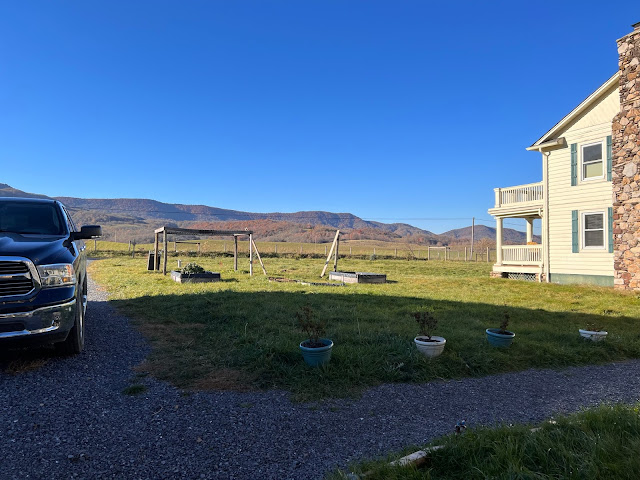 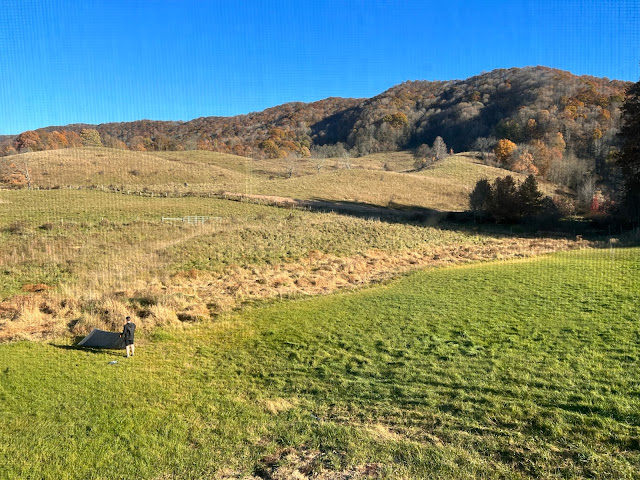 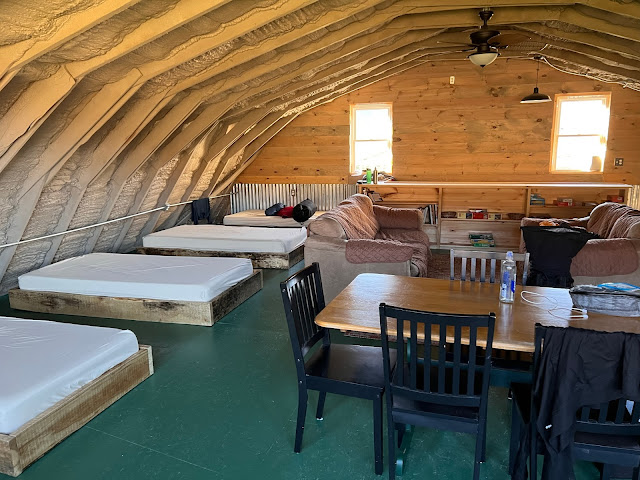 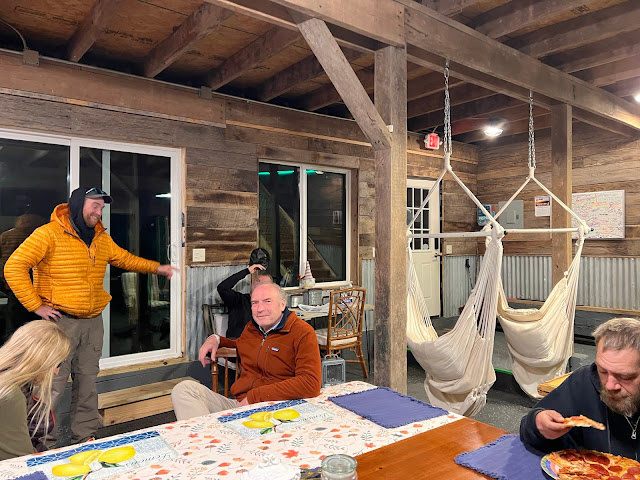 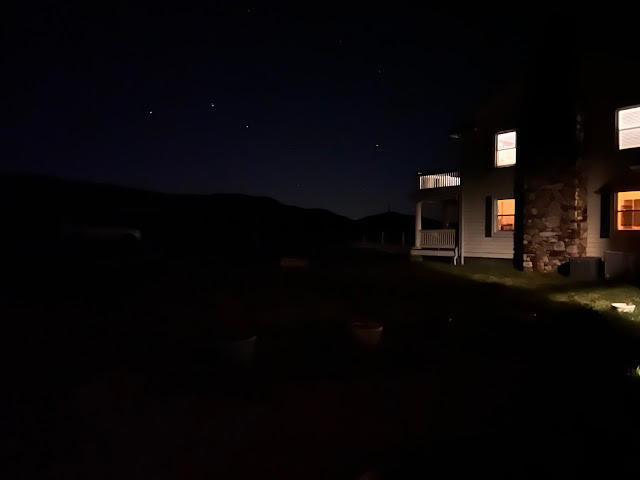 Day 3: We could start from the hostel and either hike or shuttle to the trail.  (The hostel offers free shuttles back to the Walker Gap parking lot. I pushed for the shuttle back up the mountain.)  Once on the trail, the first 1.3 miles was uphill, ascending 900 feet – sometimes steeply.  At the top, we stopped at the Chestnut Knob Shelter – an overnight AT shelter that is totally enclosed with rock walls.  I think this is the best shelter in Virginia.  The views are fabulous here!  (The door was missing though, as the trail club was fixing it.) 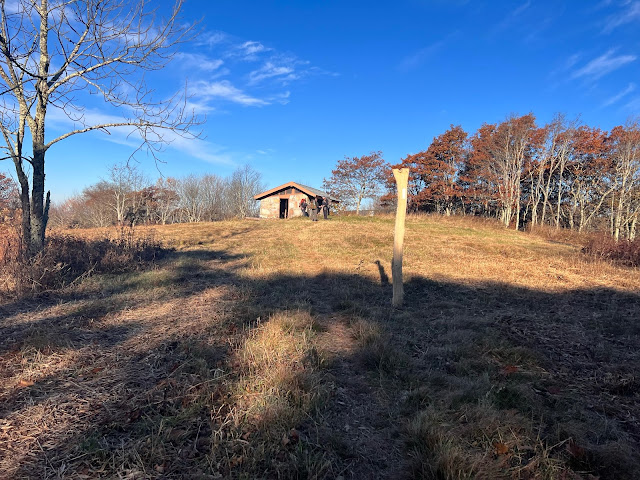 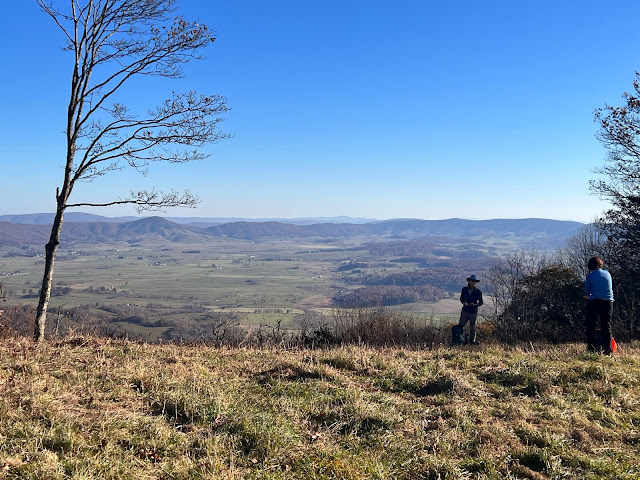 We descended the rest of the hike, losing 2150 feet over 5 miles and enjoying absolutely glorious views towards the Grayson Highlands for the first mile or so after leaving the shelter.  These were easily the best views of the entire three days.  The rest of the descent was in a forest.  We reached the 4Runner at about the 6.1 mile mark, and took the 4Runner back to Suiter Road where we picked up the Ford sedan and headed back to Charlottesville. 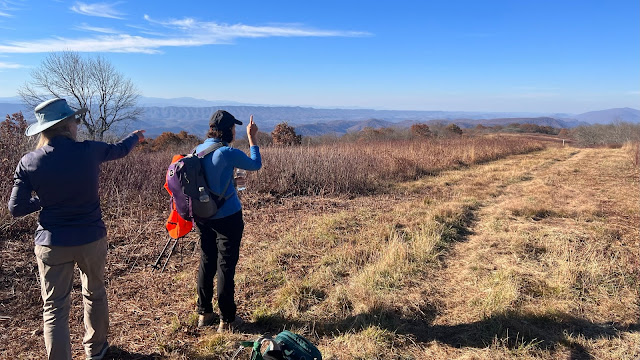 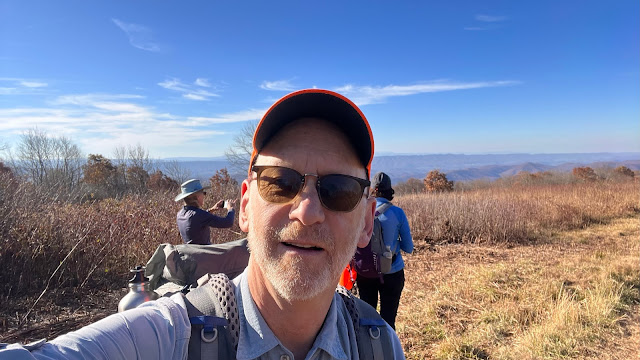 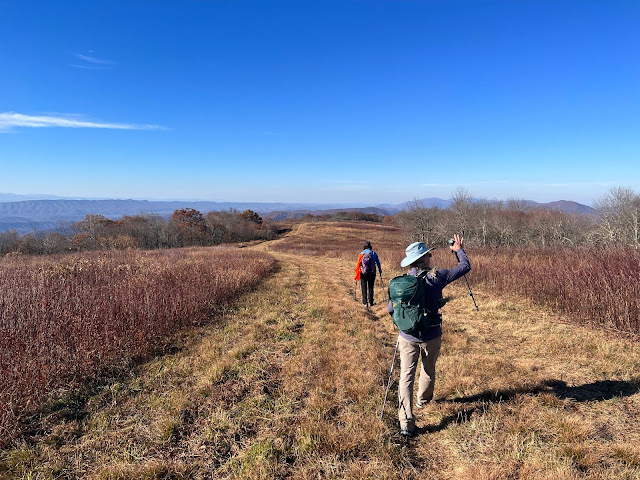 Total: We hiked 27.5 miles over three days. Note that the Burkes Garden Hostel is not open year-round.  You should contact them and inquire before making definite plans to replicate this hike.

We will be back on the AT in December, seeking to check off the Peters Mountain section of the trail, just north of the New River and Pearisburg.