This posting is part of my effort to document trails in the North River District of the George Washington National Forest that don't have much in the way of online descriptions. The Little Stoney Trail (#1027) is one of eight trails that ascend the western slope of Shenandoah Mountain.  It is the southernmost of the five trails (of these eight) that are primarily located in West Virginia, as they climb Shenandoah Mountain where the mountain's ridge forms the boundary between Virginia and West Virginia.  All of these trails are relatively short, but have exceptionally steep sections.  This hike, at 4.6 miles roundtrip, left my legs more spent than the average sub-5 mile hike does (or should). 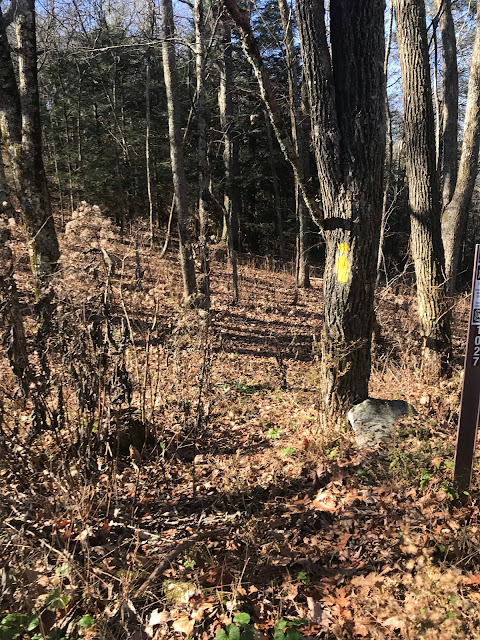 The Little Stoney Trail is listed on the Trails Illustrated Staunton/Shenandoah Mtn Map #791 as a hiker only trail.  It is probably also a winter only trail, given the difference in my experience looking at the trailhead twice in 2020.  Above is a photo taken in November, and below is a photo taken of the same area in July, both looking at the trail's start from the parking lot.  No way I was wading into that back in July! 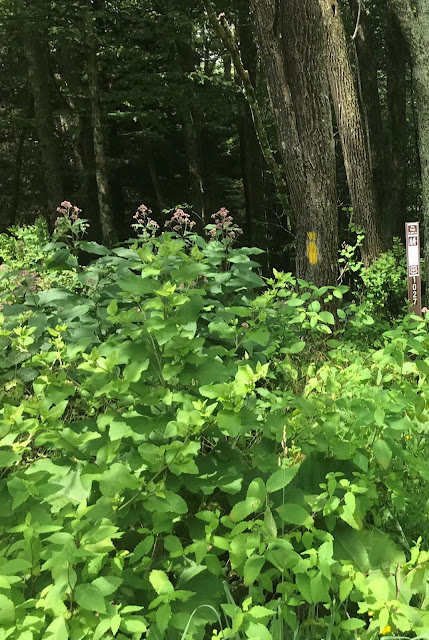 There are two trailheads for this hike, on the trail's eastern and western ends.  From my home in Central Virginia, the eastern trailhead is much closer.  I also believe, however, that the trail is easier to follow from the summit than it is from the lower part of the trail.  Below is a hike description that attempts to guide a first timer coming from either direction.  Overall, I did not find the trail that hard to follow - a surprise, because an experienced hiker I know told me that he and a colleague gave up when trying to hike this trail, due to inability to follow its route.  I had a route in my GPS which helped resolve any questions I had when hiking.

Mile 0.0: The eastern end of the Little Stoney Trail is on the ridge of Shenandoah Mountain, a couple of miles south of the summit of Reddish Knob.  The Trails Illustrated map shows that the trailhead is also a Forest Service picnic area with privy.  This is another example of these maps being wrong - if you show up here with a full bladder, you are going to be using the woods! 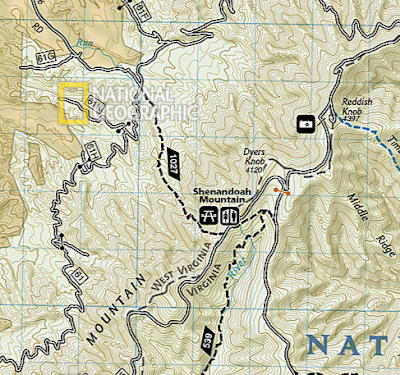 What is there now is a parking area.  The trail marker shown in the photos above is at the beginning of the parking area.  Beyond the parking area is likely the old picnic area.  It would make a good camping area today, even without the privy or tables.  At trail's start, look for several trees marked with yellow paint forming an "i."  Facing the trail in the parking lot, the trail drops down then cuts left towards a ridge.

Mile 0.2: After riding the side of a ridge as shown in the photo below, with higher elevations on your left and lower on your right," the trail takes a slight right angle to descend along the ridge. 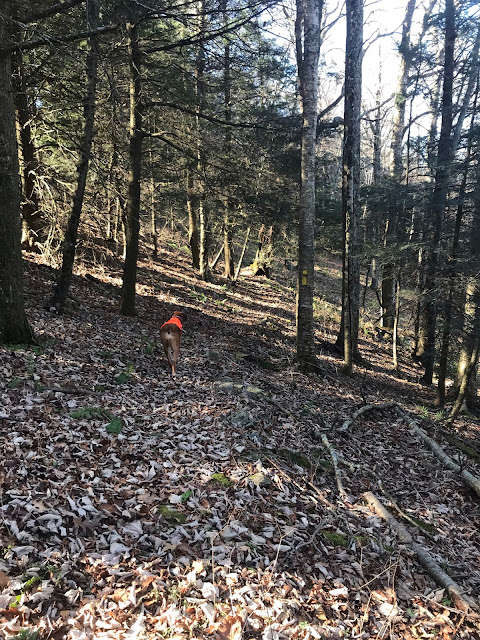 The trail enters into an area of Mountain Laurel that is 3-4 feet high.  The trail is relatively easy to follow through here, even though the Laurel sometimes pushes into the trail and the yellow blazing that was prevalent early in the hike is now gone. 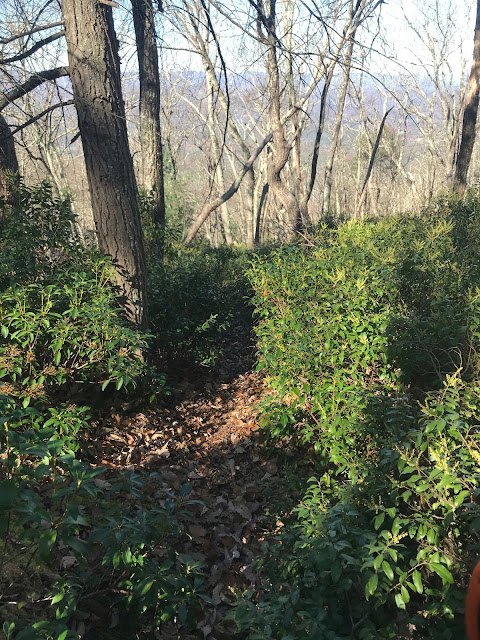 Mile 0.5:  The trail takes a sharp left off of the ridge, then a couple hundred feet later cuts right to follow a little valley, on the right side of the stream bed.  It should be obvious, but if you drop down into the stream bed, you have gone too far.  The trail here is very nicely constructed to hug the slope, and there are some pretty views thrown in for good measure.  In the valley to the north, the Navy's satellite dish installation should be visible in winter. 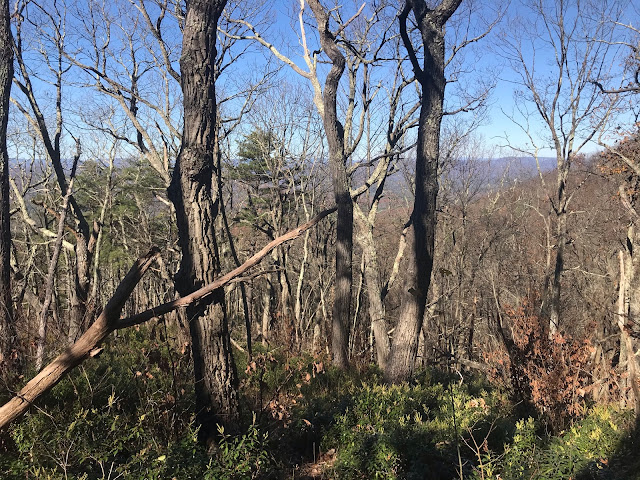 Mile 0.7: The trail reconnects with the ridge and follows the ridge downhill for quite a while, entering in and out of groves of short Mountain Laurel.  The trail remains easy to follow, despite a lack of yellow blazing.

Mile 1.2: Exit from the last set of Mountain Laurel.  If heading uphill, you can find where to enter the Laurel by looking for a tree with a yellow diamond (see below). 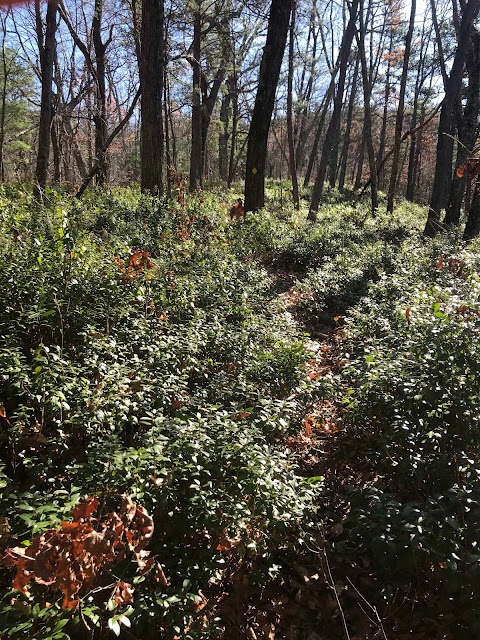 The trail gets harder to follow here.  Stay on the ridge until a field becomes visible downhill to the right at about 2 'clock, then cut down to the field.  It was this section that I used my GPS track the most, as this area could have used more blazed trees.

Mile 1.4: Come out in an open field that is likely kept open by the Forest Service to attract wildlife. 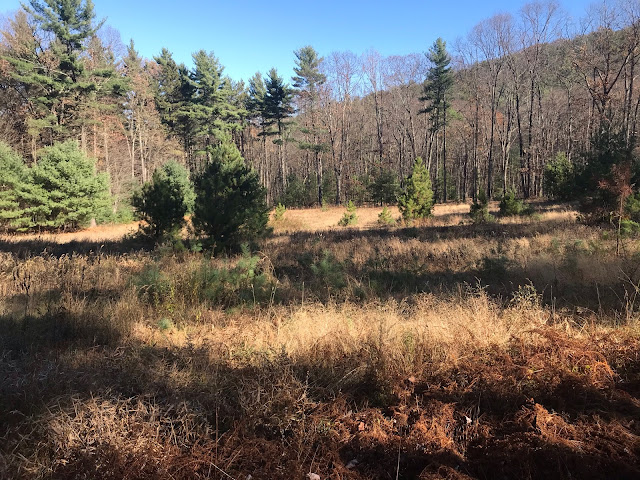 Hike through this, staying to the left.  On the opposite side to the left, under the large pine tree grove in the center of the photo below, is where you want to go.  You will find a road there, which you follow for the rest of this hike. 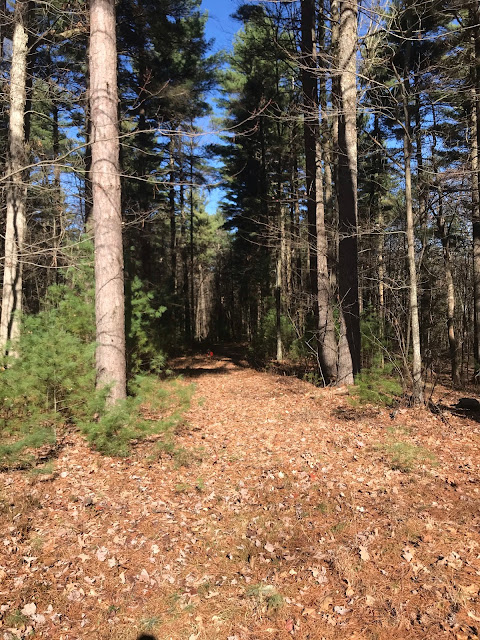 Mile 1.7:  Cross the first of two streams.  The second stream is at the 2 mile mark.  Note along the way that the road merges into a couple of other woods roads.  Remember which way you came, though I didn't find this at all confusing. Mile 2.3: Reach the end of the trail, at a closed gate.  The trail is marked by a metal marker, shown in the third photo below.  The road is a forest service road (#61) that heads west to Sugar Grove, West Virginia. Turn around here to return to your vehicle. 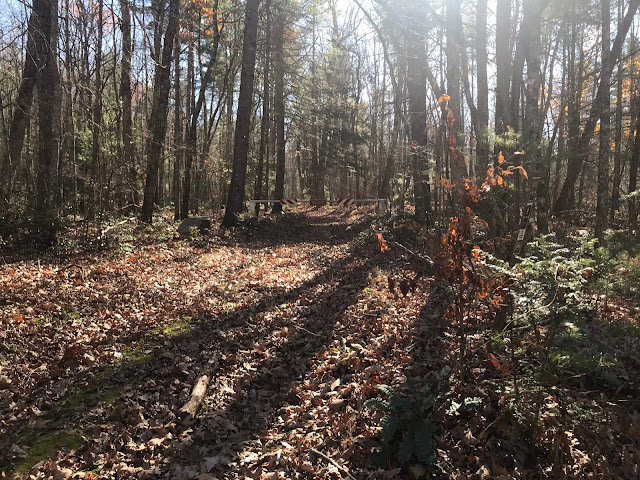 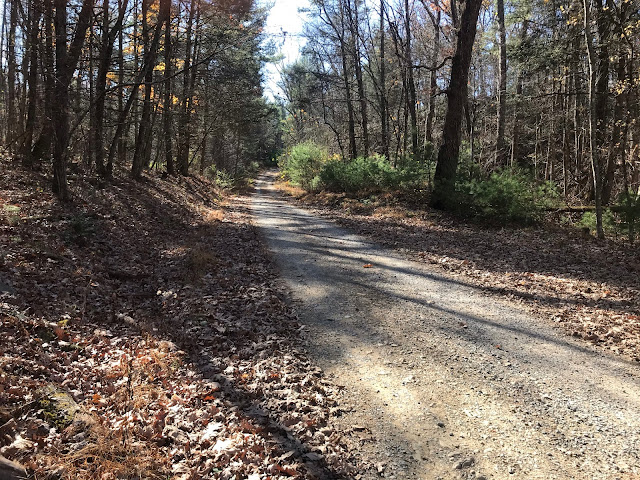 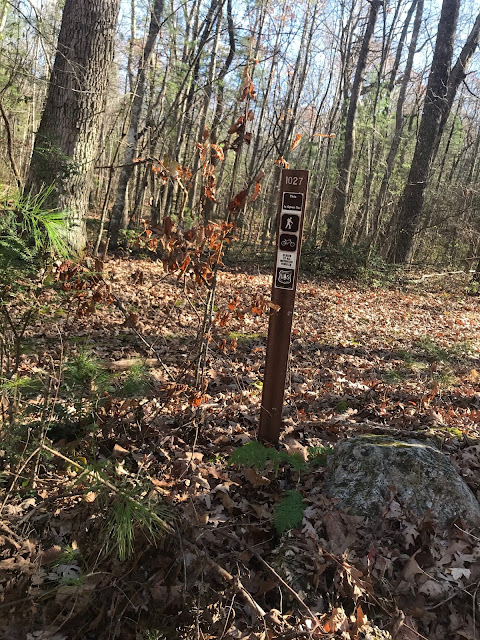 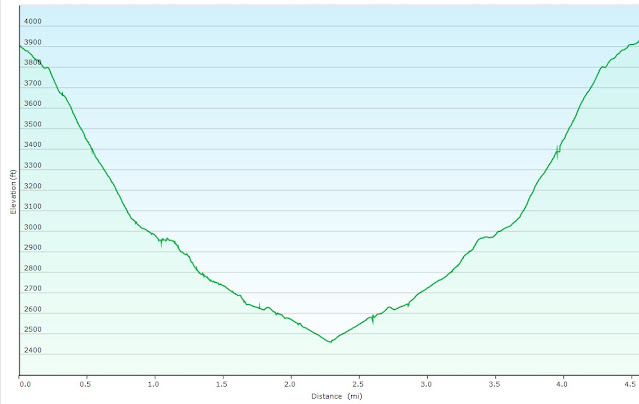