This posting is part of my effort to document trails in the North River District of the George Washington National Forest that don't have much in the way of online descriptions. Like much of the North River District north of US 33, this trailhead is tough to find and involves a drive over difficult Forest Service roads. We came in via Broadway, Bergton, and Criders, driving in from the north for the northern portion of this trail and accessing via the rough Snake Hollow Road and tough-to-find Snake Hollow Trail.

Several weeks later we returned to access the southern portion of the trail via forest service roads from the south, and these roads were in such terrible shape that I would never recommend them to anyone not driving a Jeep. The German River Road's southern section set a new personal record for the worst forest service road I've ever driven on, even surpassing a road on Shenandoah Mountain that basically murdered a Subaru Outback I once owned - that car never made it back to Charlottesville after driving to the Benson Run Trailhead.

In between these two access points, local landowners claim (apparently without legal basis) that there is no public access to German River Road from the north (via Bergton).  One map we found showed a gate on this road, and we did not push the point, though we have since heard that others have made the drive on this section without incident.  Below I recommend the best way to access a trailhead - via the Snake Hollow Road. 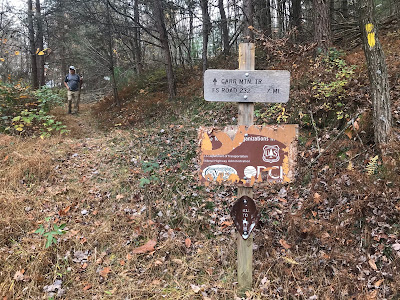 The Carr Mountain Trail is likely the most obscure trail in the North River Ranger District.  The only way I found out about it was a reference to the trail in the PATC's guidebook to the Virginia section of the Great Eastern Trail (GET).  It can also be found on a brochure for the proposed Beech Lick Knob Wilderness, as the trail forms part of the Wilderness boundary.  Link. This trail is a part of the long distance GET, and was built back in 2012 - 2014 due to construction of the GET.  Construction was completed by the PATC's Southern Shenandoah Valley Chapter and mountain bike groups. Link.

Further isolating this trail from any use is the fact that it isn't found on either of the National Geographic/Trails Illustrated maps covering this area, though they do show the Snake Hollow Trail. (Much of my continuing issue with these maps is the mistakes I continually find in their coverage - I am genuinely convinced that the only change to these maps each time one is revised is to increase the price of the map.)

The North River District also publishes a list of its trails and this one is not on that list.  The list is pretty old - it also fails to include all of the trails that were in the old Deerfield Ranger District, which merged with the Dry River District to become the North River District a couple of decades ago.  But I found this list still publicly distributed by the Forest Service as recently as the Summer of 2020, without updates.

Getting to the northern end of the Carr Mtn Trail is difficult, but I found it easier than reaching the south end.  The best way to do this is to take the Snake Hollow Road.  The SHR is a somewhat rough road that is easy to miss when driving south on the German River Road from the tiny town of Criders.

This map shows the Snake Hollow Road, but incorrectly indicates that it does not connect to the German River Road. 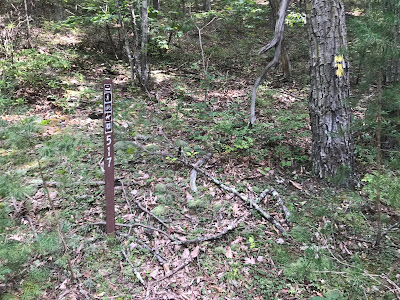 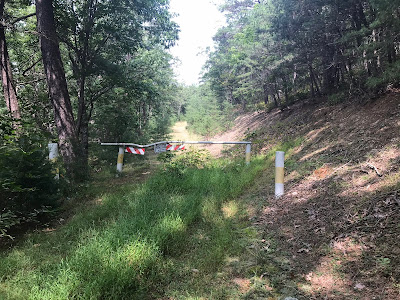 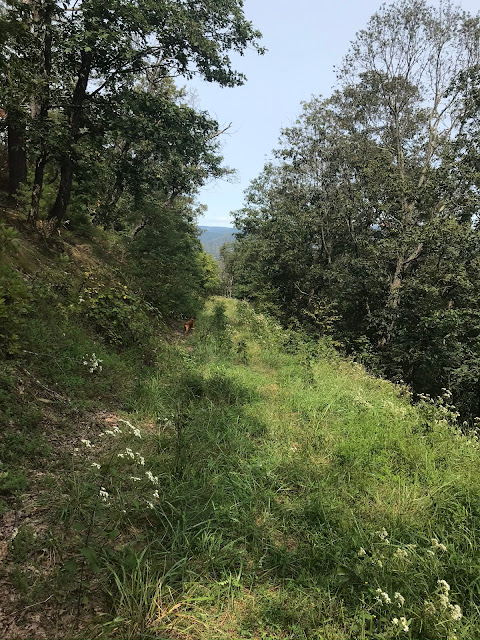 The trail uses the old road for its first mile, until the road ends.  Above the road's end, on a steep slope perhaps 100 feet uphill, is a white shed and an antenna that appears to no longer be in use.  Maps seem to indicate that the road once connected this point with the top of White Grass Knob, about 500 feet above, but the slope is so steep that such a road does not seem to have ever been possible.
From here, a trail heads east along the slope, marked by faded yellow blazes. 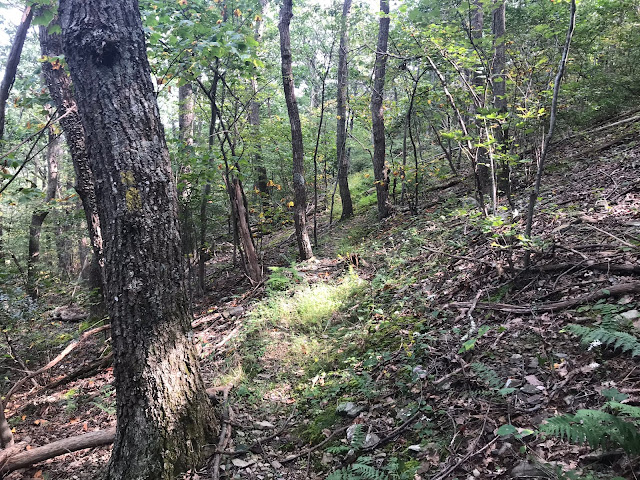 The trail eventually comes out into a flatter area that appears to have once been an orchard. 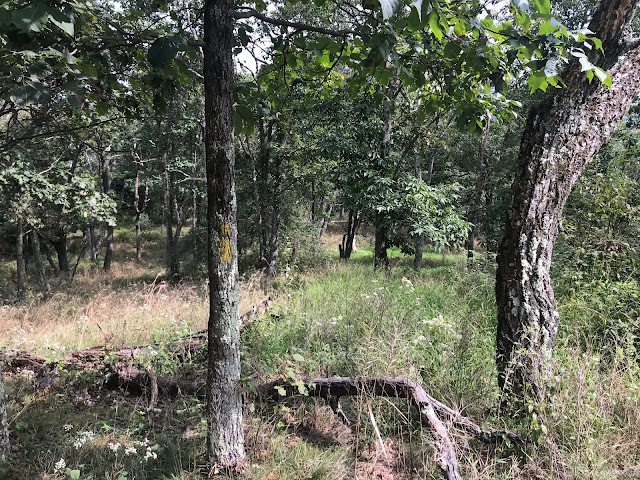 It is harder to follow here, but it continues east until it reaches a woods road called the Blue Hole Road (FR 302), 0.7 miles after the end of the old road and 1.8 miles after the gate where you must park a vehicle.  This road is pretty grass covered, and it is hard to believe that it is ever open to traffic.  And it may not be - North River District documents indicate it is open in August of every even numbered year, but I found it gated during August 2020.  This road is part of the Great Eastern Trail, and the guidebook indicates that the road at this point is 6.4 miles from where it is gated, just south of the Forest Service's Blue Hole recreation area. 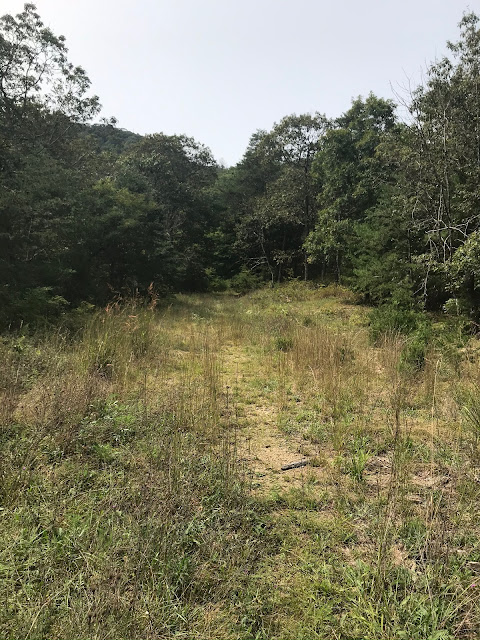 Take a right here onto the road (shown above), and soon the road ends and a trail sign for the Carr Mountain Trail can be found, shown below and at the beginning of this post. The area along this trail has a number of flat spots ideal for camping. 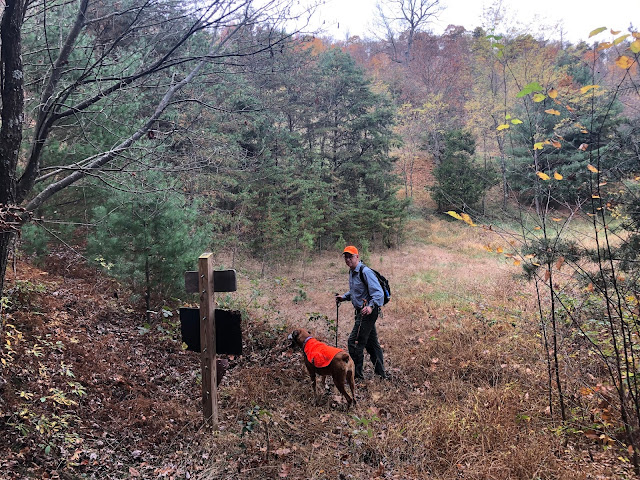 The trail follows an old road bed while climbing over approximately the next mile.  It then doglegs right and continues to climb.  For about the next 3.5 miles, the trail forms the approximate western boundary for the proposed 6,200 acre Beech Lick Knob Wilderness.  This Wilderness is exceptionally wild for this part of the country, with no trails or roads within its active boundary.  The Carr Mountain Trail ultimately ascends 850 feet over about 2.8 miles before reaching a ridge a little west of Beech Lick Knob and starting to drop down the other side.  The trail never summits the 3280 foot Beech Lick Knob. 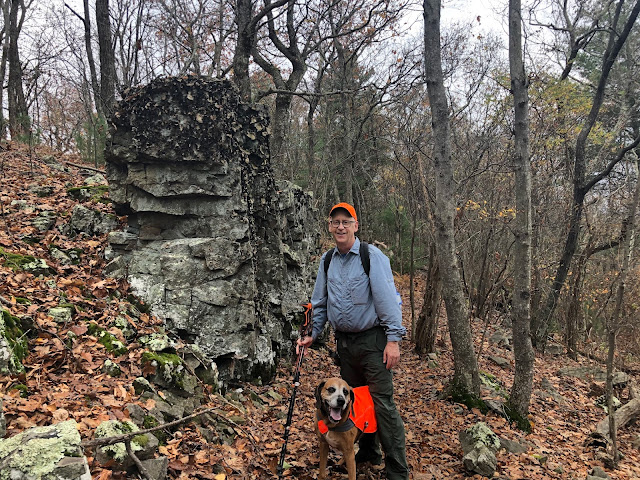 In the Beech Lick Knob area is where some mystery still exists for me.  In conversing with PATC members who built this trail, all claim that the trail splits around Beech Lick Knob, with a bike trail on the western slope of the mountain and a hiking trail on the eastern slope.  We found no evidence of the hiking trail, despite looking hard for a decommissioned trail in the same area called the Clay Lick Trail. When I return to this trail, likely in the Spring, looking for the hiking route will be at the top of my list.
We stopped at the ridge just west of Beech Lick Knob (described above) to have lunch.  This was the high point of the trail.  At this point, the views along the trail switch, as the slope the trail followed up to this point is gone, and views change from northwest to southwestern and then southeastern views as the trail heads toward a point near the summit of the 3100 foot high Carr Mountain. 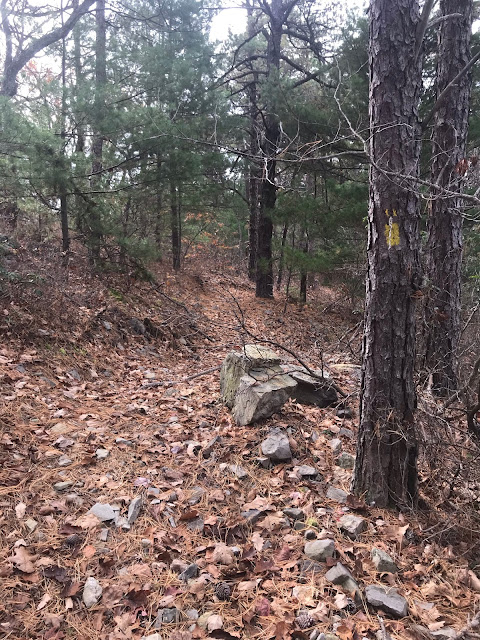 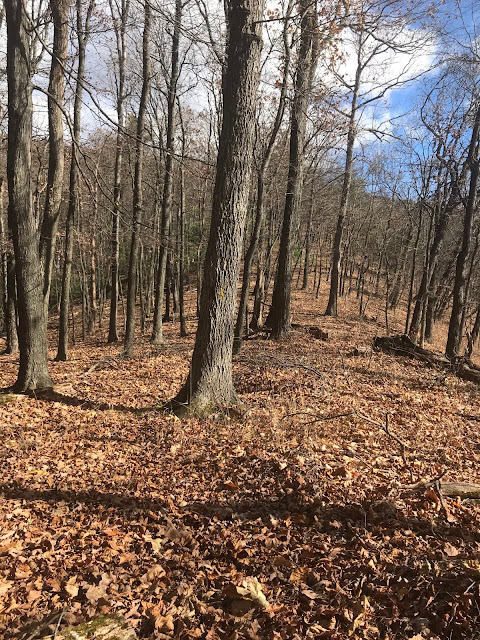 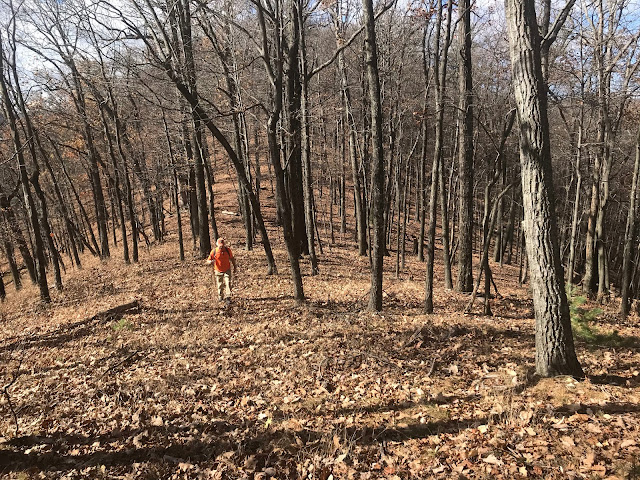 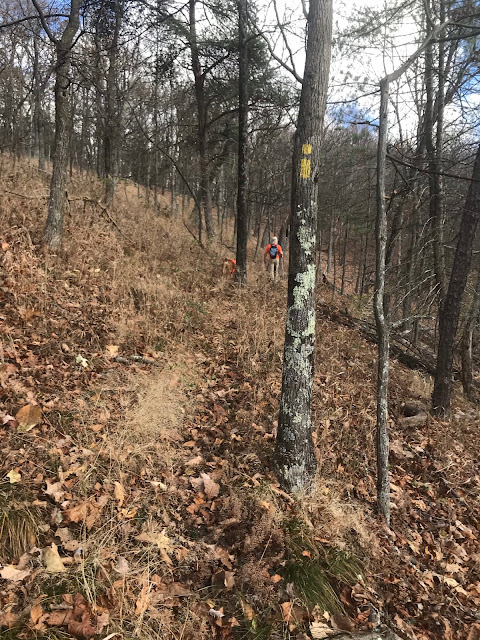 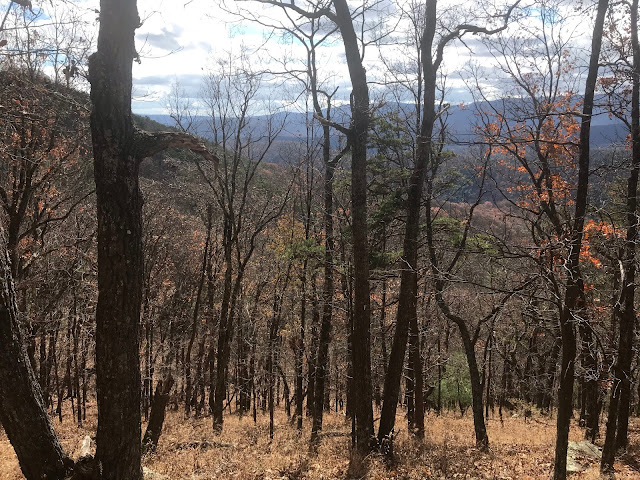 Shortly after the Carr Mountain Summit the trail again rides a ridge for a short time before cutting right, eventually heading compass west.  We had a little difficulty following the trail here, but found our way by searching for blazes on trees.  From this point, the trail drops in elevation until it reaches the German River Road, shortly after passing under some power lines and merging into an old road that appears to access a tower holding these lines. 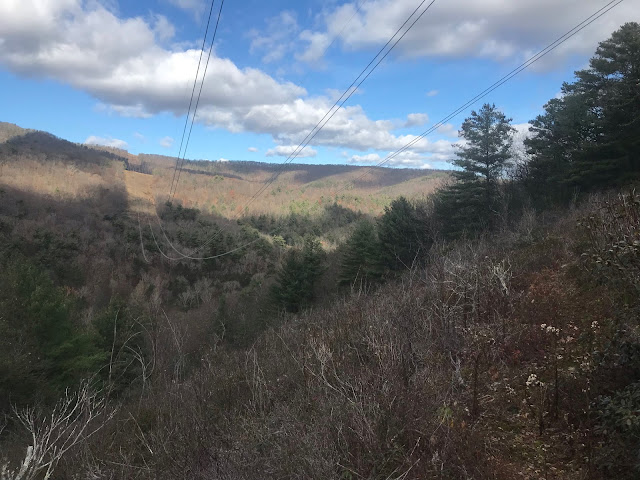 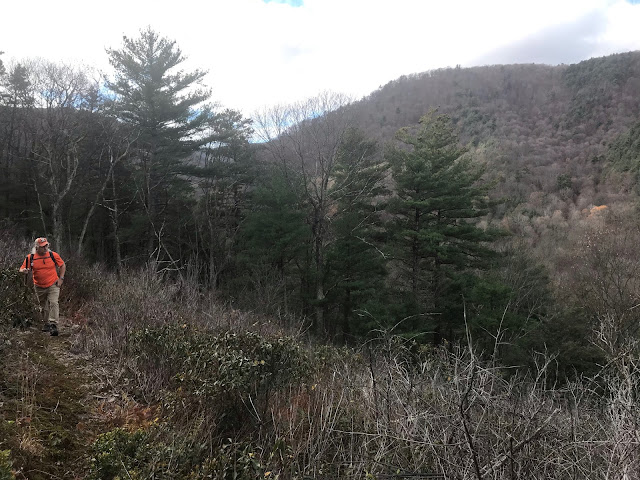 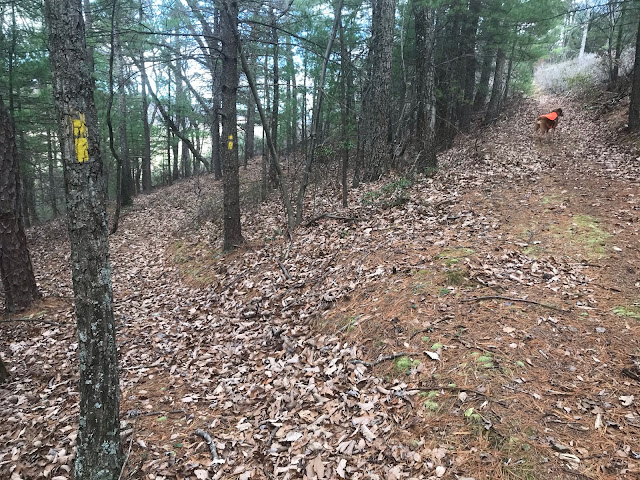 At the German River Road, the trail has no sign, but it appears like a road with blazes indicating its trail status. 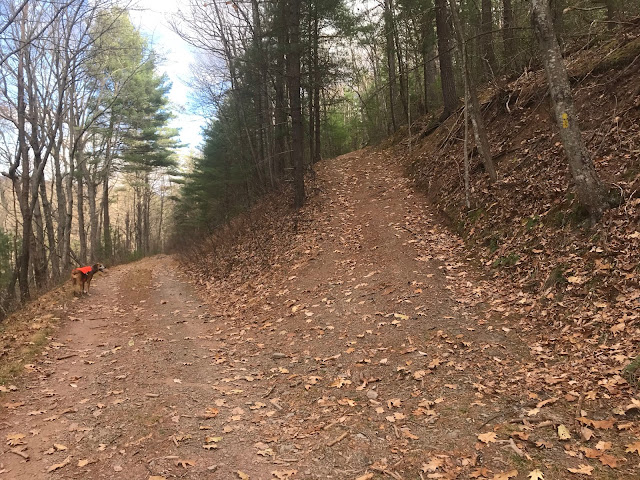 Despite the remoteness of both trails and the difficulty in reaching them, we found the Carr Mountain Trail to be in really good shape with the exception of a couple of spots where we had difficulty finding the trail.  The Snake Hollow Trail is a little sketchier, but overall not a bad trail.  If you want to hike in an area that is incredibly remote and isolated, this trail is an ideal choice.  The trip is easier with a GPS receiver that has both trails loaded onto the unit.  You can email me at jeff@hikingupward.com if you want the tracks.
Total length:
Carr Mountain Trail: 6.3 miles
Snake Hollow Trail: 1.6 miles
Blue Hole Road connecting trails: 0.2 miles
Total: 8.1 miles each way. 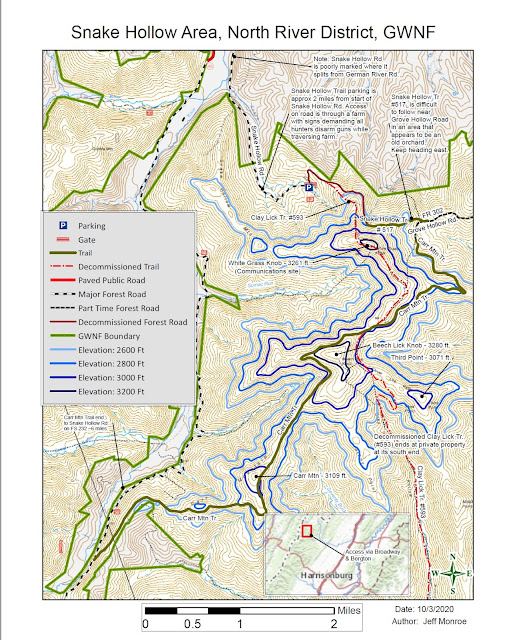