According to a posting on Whiteblaze.net, an information portal for Appalachian Trail hikers, there are at least 7 shelters in Shenandoah National Park (SNP) that were torn down for unknown reasons in the 60's and 70's. According to one source, the list includes:
On the final day of 2015, I had one more hike in me, but did not want to compete with the occupants of the four bear trucks I saw at the National Forest trailhead my dog and I had planned to use.  I ended up instead in Shenandoah National Park on the Appalachian Trail, looking for the site of the former Sawmill Run Shelter.  The shelter and access trail are shown on USGS Topographic maps, but not on current hiking maps.  The PATC trail map shows a spring, but the National Geographic Trails Illustrated map does not - only a stream.

I ended up taking a short hike into the past.

As you can see from the topo map copied below, the access trail to the former shelter site is right at the point where the A.T. takes a sharp turn to the right when hiking northbound.  This is a great help, as one of the toughest things when searching for an old trail is finding the point where the former trail connected with the current trail system.  An experienced trail person once told me that old trails are only obliterated for a short distance, as when a former trail is not on a map and not evident from any current trails, usage drops to nearly zero. 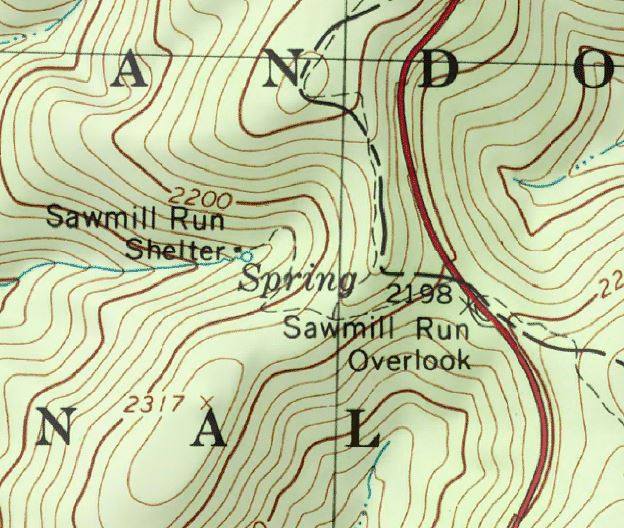 That doesn't mean I found the trail very easily.  Right at this sharp turn, there are several trails heading off along Sawmill Ridge.  I had to hunt around in the woods for a while until I came upon the old shelter access trail.  I found it right at the switchback shown on the map.
After I located the trail, it was easy to follow.  It was bordered by brightly colored moss and was in better shape than many of the national forest wilderness trails I have hiked in the past year. The trail led down to a slowly running spring, which feeds into Sawmill Run and the South River just north of Waynesboro.  (The South River merges with the North River to become the South Fork, Shenandoah River, just north of the town of Grottos.)

There is no sign of the old shelter - only a flat spot with a fire pit.  It must have been a small shelter, as there is not a lot of space at the former shelter's estimated location.  But it is an exceedingly peaceful location, and it was nice to sit for a while and contemplate all the folks that used this now isolated spot until about 40 years ago.  The site is not even listed as a campsite on the A.T. guides, likely because the National Park Service wants hikers to practice "Leave No Trace" dispersed camping, rather than trampling specific spots.


So what is the deal with the elimination of this shelter?  I asked the Potomac Appalachian Trail Club's Archivist. who told me that the "Sawmill Run shelter was brought into the system in 1941, and was closed/dismantled in 1984."

He continues, "The rampant misuse of the AT and shelters during the counter-culture revolution in the 1970’s led frustrated NPS officials to close shelters.  An SNP Superintendent in the 1970s finally closed all shelters, and did not reopen them for several years, enduring passionate protests from PATC president Ed Garvey.  The closure of Sawmill Run does not seem to fit into that timeframe, and my database does not show why it was closed.  1984 does not seem to synch in with the shelter closure, so it might be a misprint for 1974."  He later came back with an old photo of the shelter, from the PATC Archives.  Here it is:

Another source says that shelters in SNP were removed for three major reasons.

1. The Federal Wilderness Act - some of these shelters were in areas designated as wilderness and were removed for that reason (he lists Big Run and Rip Rap Shelters.  I am not sure that Rip Rap was sited within wilderness boundaries, but Sawmill Run probably is).

3. Money - by removing the shelters they no longer had to patrol them or clean them up thus fewer calls on park resources.

Returning to the Appalachian Trail, the shelter access trail remains in good shape for its entire length, though I might not say that if I visited in July, like fellow searcher Bill Fawcett did (photos below).

I didn't find the trail originally because I didn't look in the right place.  Hopefully the photo I have included with this blog posting will help you find the trail if you want to go out and check it out.  It is a short hike to a peaceful spot that was once much more used than it is now.  I recommend it as a spring access point, but not for camping as there isn't much room down there.