The James River Face Wilderness is one of my favorite places in Virginia to hike.  In the past two years, I have journeyed here seven times for hikes in this wilderness, completing all mapped trails in the wilderness.  And because I lead hikes for both the Roanoke Appalachian Trail Club and the Potomac Appalachian Trail Club's Charlottesville Chapter, this is a great location somewhat mid-way between these two areas.

The really great thing about the JRF Wilderness is that every time I return there I find something that has me itching to return again to explore.  This place is like a proverbial onion, with layer upon layer of places to explore.  First, there was the Appalachian Trail.  Next there were the other official trails in the Wilderness, which ascend like wagon spokes from disparate locations outside the park to a central core at higher elevations inside the wilderness.  Now, I am excited to continue exploring trails that used to exist and are no longer recognized by the Forest Service.

On January 16, 2016, I led a group hike through the JRF. There were too many hikers for a single group, as Forest Service regulations limit a hiking party to 10 or fewer people, and we had 16.  So we broke into two groups and one group ascended the Sulphur Springs Trail, while the other (my group) ascended the Petite's Gap Road and entered the JRF on the old Sulphur Ridge Trail.

This is a great time of year to use the Petite's Gap Road as a hiking trail.  The Blue Ridge Parkway was closed due to ice, which meant that Petite's Gap Road was a dead end.  We could tell from the undisturbed snow on the road that no vehicles had passed by our starting point, so we were safe from vehicles uphill of our hike.  Since we parked at the trailhead for the Sulphur Springs Trail, our first 2.2 miles was hiked on the Petite's Gap Road.

The Sulphur Ridge Trail leaves the Petite's Gap Road at the same place that the Glenwood Horse Trail leaves the same road, headed in the opposite direction.  You have to know what you are looking for, but it isn't too hard, as the road takes a hard left right at this point.  I took the group in this direction because I wanted to make sure the group made this critical turn, and a couple of the speedier hikers in our group almost missed it.  The trail shows up on the USGS topographic map, but not on any current trail maps because the Forest Service doesn't want it included on maps.  I have previously described this trail here: Link, and included a video so you can see how nice it is.

Despite not being on the current list of trails, this old trail is in good shape and has a gentle grade.  I chose this loop for the group's hike because there is not a steep grade in the entire hike, and it is a great way to easily ascend to the upper reaches of the wilderness.  It is slightly steeper if you hike it counter-clockwise, taking the Petite's Gap Road first, than if you start off hiking the Sulphur Springs Trail.

We hiked the old Sulphur Ridge Trail until it ended at the Appalachian Trail - where that trail takes a sharp turn.  We left a pink marking ribbon here so that the group hiking in the opposite direction wouldn't miss this turn, but it really wasn't a problem, as there was a dusting of snow on the ground and no footprints on the A.T.  In fact, we never saw evidence of another hiker in the wilderness all day.  The other group followed our footprints and knew when to turn off of the A.T.
Both groups met for lunch at the site of the old Marble Spring Shelter.  A shelter was originally constructed of wood and tarpaper here in 1933, but it was destroyed twice - first by a bear and next by "vandals." After JRF became a federally designated wilderness in 1976, the first such wilderness in Virginia, the latest shelter was disassembled and moved south where it still exists on Cove Mountain. There is no real sign of the shelter today, only a flat spot with a fire ring.
The group gravitated to the east, down below the crest of the saddle where the shelter used to sit, as the wind was cold.  I never got around to lunch because the old shelter location is also the endpoint of an old trail that connected to the Blue Ridge Parkway. At the shelter site, there was a dusting of snow, and as a result, the old trail nearly lit up in the woods - its location showed up very clearly, as you can see from the photo below.  This trail is no longer on maps, but older topographic maps show its existence. The 1950 edition of "Guide to Paths in the Blue Ridge," the precursor to today's ATC Appalachian Trail Guides, describes the trail as follows: "Forest Service Trail leads .8 m. to Blue Ridge Parkway at 4.6 m. from U.S. Route 501 and 2.7 m. from Petites Gap; this trail continues 1.2 m. farther to Peters Creek Road." The trail is also described in the 1974 edition of the "Appalachian Trail Guide: Southern Virginia," but here it is "an unblazed trail" that "leads 0.8 m. to the Parkway between mile posts 68 and 69." I need to go back to follow the old trail, now that I have located where it comes into the Marble Spring area. (For an update, check out this post: Link.)
After lunch, we continued northbound on the A.T. until we reached its intersection with the Sulphur Springs Trail.  We took a left onto that trail, which is really an old road.  Interestingly, this road is neither found on the old topo shown above, nor is it described in the 1950 trail guide.  Maybe it is newer than that guide and map.  It is described as a "fire road" in the 1974 trail guide.

Shortly after turning onto the Sulphur Springs Trail, we came to a rock which provides, for my money, the single best viewpoint of the entire JRF Wilderness.  The view is southwest down the valley we drove to get to this hike, and it looks like there has been no human activity anywhere, other than the road we hiked in on.
The Sulphur Springs Trail dropped us gently down to our trailhead, and a few minutes after we arrived, the other group met up with us.
The two Charlottesville hikers headed north through Buena Vista, and we got lunch at The Meat Shack - the special was hot turkey, with a double shot of mashed potatoes and we nabbed the table closest to the fireplace.  Yum!  I can't wait to return. 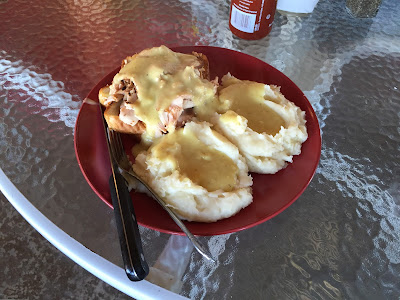 Like what you see?  Check out my other blog postings!  LINK.
Posted by Jeff M at 1:25 PM