BSA Troop 1028's November campout took the group to Fort Valley Ranch in the Massanutten Mountains near Luray, Virginia, where a group of scouts completed the requirements for Horsemanship Merit Badge by participating in a guided trail ride.
I joined the group late Saturday night, after the riding was complete, as I had other Scouting-related responsibilities which took me to Roanoke for the day.  I discovered, the hard way, that the Fort Valley  is a really dark place at night - I consider myself lucky to have found the group!  And you can forget about relying on cell service when you are in the bowl that is the Fort Valley, making it a really great place to take Boy Scouts who like to spend time texting.

Sunday morning we packed up and took a short hike during the trip back.  I chose a section of the Massanutten National Recreational Trail between Edith Gap and Kennedy Peak for the group.  It is a pretty easy mountain trail, with only 1551 feet of altitude gain over 5.6 miles, and it has a huge payoff at the mid-point of the hike with a spectacular view.

We parked at the point where SR 675 crosses the crest of Massanutten at Edith Gap.  SR 675 is the main route into Massanutten from Luray.  Edith Gap claims to be a hang glider launch spot in the guidebooks, but I wonder when the last time anyplace outside of the Outer Banks has last seen a hang glider.  I think that hang gliders have gone the way of "the Captain and Tennille," dying with the end of the 1970's.  Edith Gap is at 1850 feet elevation, and its coordinates are N43.515 W30.598.

There is a parking area here that holds around 10 vehicles, and the trail follows an old road northeast across the road from the parking lot.  Following this road for the first 1.5 miles gains you 310 feet in elevation before the roadbed ends, the trail takes a right turn, and the uphill starts in earnest.
At the 1.75 mile mark is a point that is easy to miss.  The trail follows a sharp switchback to the left at a point where there is a small rock cairn.  Part of our group missed that and continued on an old trail to a former microwave tower before realizing that they weren't on the main trail any longer.  Be alert in this section - you should never find yourself on the east slope of Kennedy Peak.


At 2.4 miles is a limited view of the Fort Valley - hardly worth mentioning, but the trails are a little confusing here.  Stay on the main trail and shortly thereafter, at 2.5 miles, is the side trail to the summit of Kennedy Peak.  Follow this side trail for 0.4 miles to reach the top at the hike's 2.9 mile mark - the highest point on Massanutten's east ridge.  At the summit is a lookout point that utilizes the stone base of an old fire tower.  The lookout was recently rebuilt - in fact, extra lumber still remains around the base.  The lookout provides a spectacular view of the surrounding countryside. There are really very few viewpoints as great as this one in this part of Virginia.


The tower not only holds an overlook, but a small (3 person) cubbyhole shelter for campers.  It would be a gamble to plan an overnight here, though, as there is little room for tents if you arrive and find the shelter already full.

The tower was originally built by the depression-era Civilian Conservation Corps, and was rebuilt in July, 2014 thanks to the efforts of the Potomac Appalachian Trail Club and the same Fort Valley Ranch the troop had camped at the night before.  The December 2014 PATC Newsletter describes the process as one that required mules, helicopters, and a lot of labor.  Below are a couple of photos from the PATC showing reconstruction of the overlook.  These photos were part of a presentation at the PATC's Annual Dinner that I attended in November, 2014. 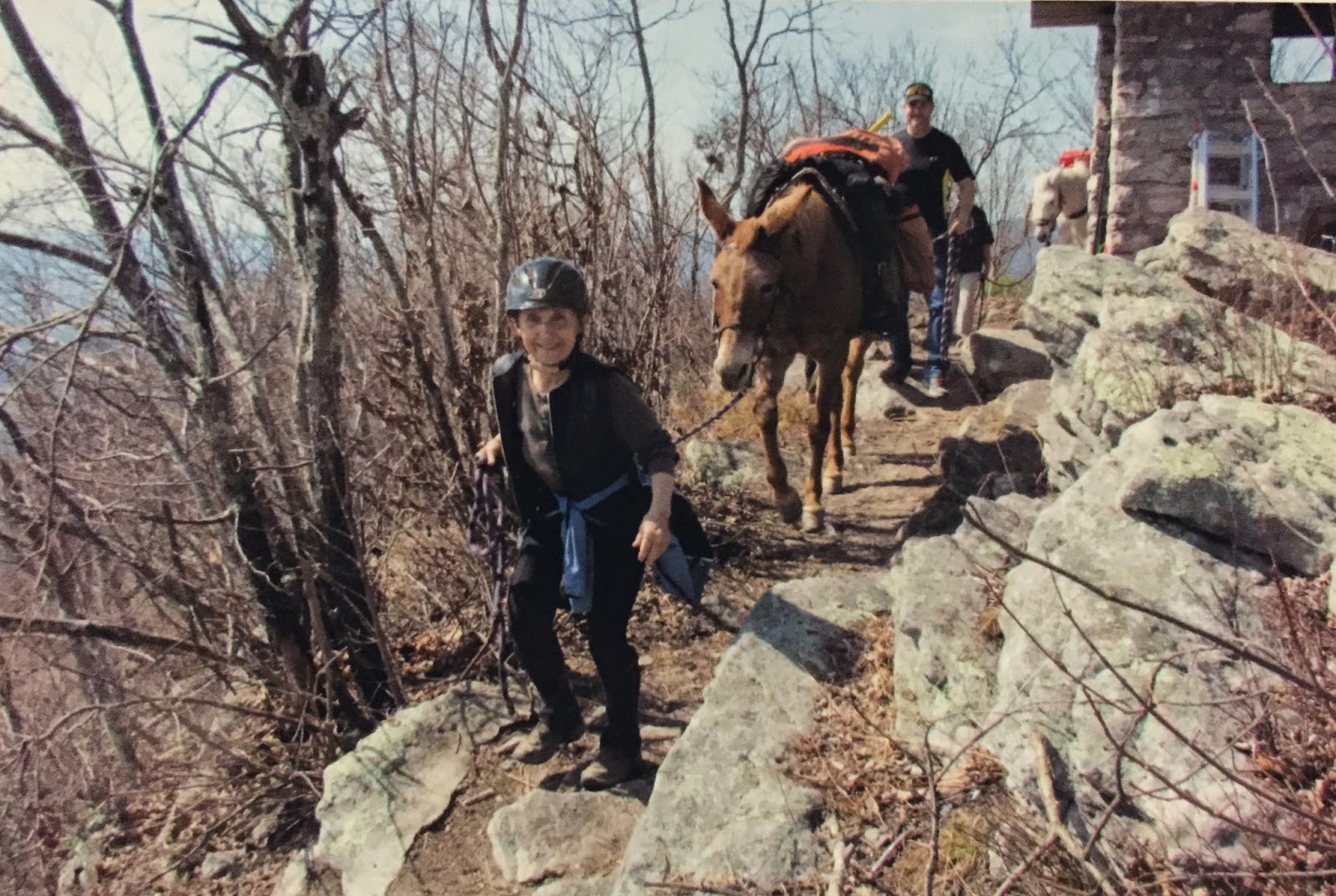 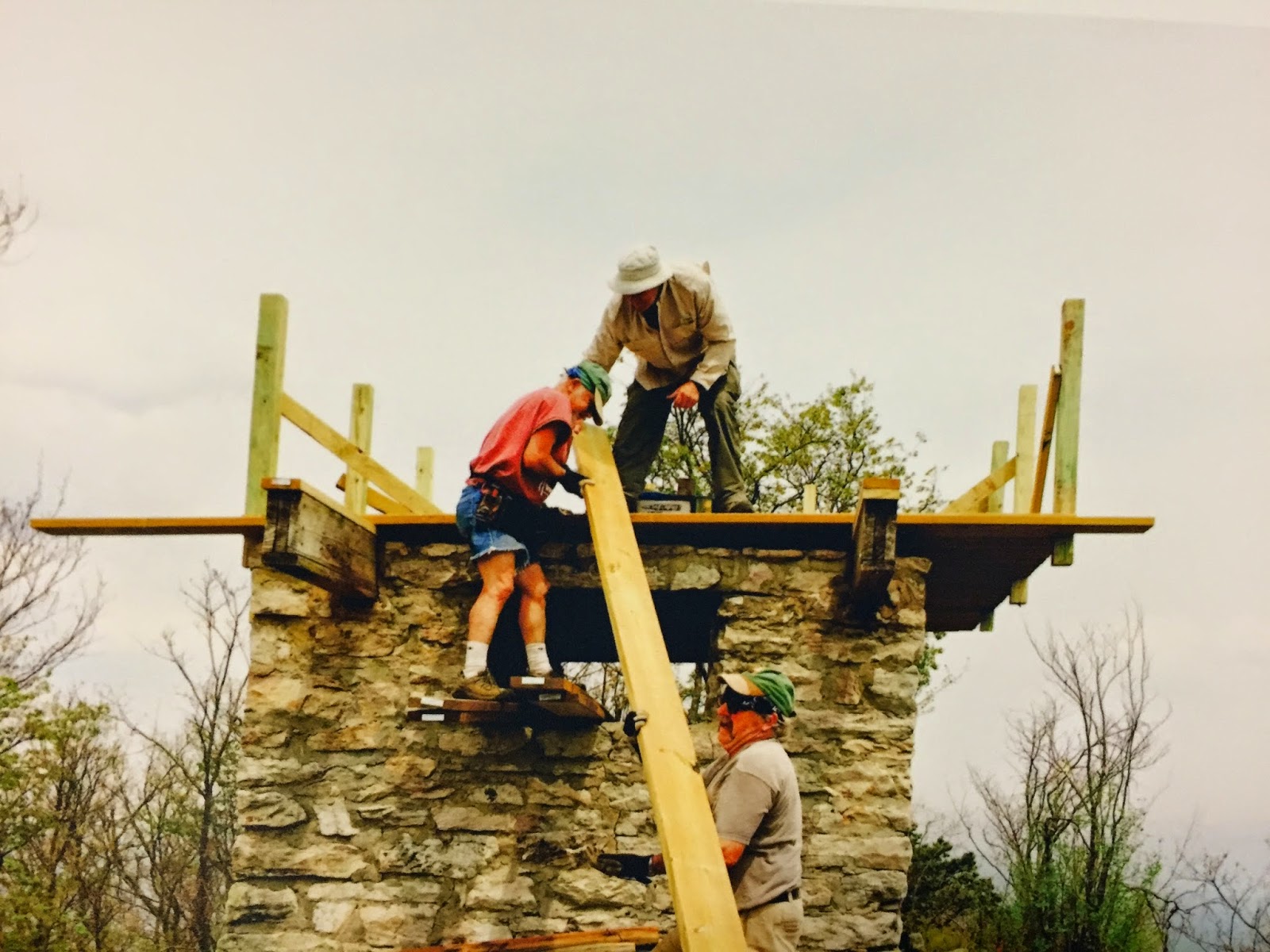 We returned via the same route we took to the tower, completing the hike in a little under 3 hours - including nearly a half hour of stops along the way and at the top.  This is a nice family hike, as it isn't very tough and the views are spectacular.  And I can point to several scouts who will vouch for the fact that snacks taste really good when eaten on the newly rebuilt observation tower.

For more information about the hike, I recommend the current edition of the PATC's "Guide to Massanutten Mountain Hiking Trails, 5th Edition" which I used to help plan the hike, and PATC's Map G - Massanutten Mountain, North Half, available at most outdoor stores in Northern and Central Virginia.  Here is a map showing our route: Map.