I have hiked trails in the James River Face (JRF) Wilderness at least half a dozen times in the past 20 years, but never explored all of the trails.  Because they extend in every direction like bicycle spokes, it is hard to do more than one trail per trip, and the distance from Charlottesville is 85 miles - not insignificant!  This time, I did a nice loop hike that not many people from these parts ever experience.

A recent re-design of the Appalachian Trail maps that come with the guidebooks shows that two trails I'd never taken in JRF could be done as a loop hike when combined with the Glenwood Horse Trail.  Despite visions of a rutted, rocky pit full of manure (as I have experienced near Mt. Rogers on horse trails), I decided to give this loop a go.  I needed to measure one of these trails for the PATC - the Balcony Falls Trail - so I had more incentive to make the trip.  My plan was to hike up into the wilderness on the BFT, take a trail I had never taken before that parallels the Appalachian Trail, then return down via the A.T. and the Gunther Falls Trail.  Then I would take the Glenwood Horse Trail back to my car.

The hike starts at a Jefferson National Forest picnic area called the Locher Tract - an old farm and shale mining site that now has a privy, parking area, and some bird watching trails. The area is open year-round, though the privies are only open from mid-March to the end of November. You get there by driving down Interstate 81 to the Natural Bridge exit, taking U.S. 11 to Natural Bridge then taking a left onto Va Rt 130 towards Glasgow. Take a right in Natural Bridge Station onto Arnold's Valley Road (there is a sign for Cave Mountain Lake and another for Yogi Bear's Campground here), then a left onto James River Road (following the signs for Yogi's). You will pass the Yogi Bear Campground - a big operation on both sides of the road - and follow signs to the end of the road for the Locher Tract. There is parking for at least a dozen cars.

At the end of the parking lot near the privies is a large kiosk and a trail sign for the Balcony Falls Trail. The trail is very easy to follow as it winds its way through relatively flat woodlands over the first 1.5 miles or so of the hike. After the 1.5 mile mark, the trail climbs at a consistent 11% grade for the next 1.8 miles, climbing from 790 feet to 1830 feet over 24 switchbacks before briefly leveling off at the 3.75 mile mark. Then it starts another climb, ascending from 1850 to 2600 feet over another 1.8 miles, climbing at an easier 7.5% grade. Just after the first switchback, the hiker crosses into the JRF wilderness, where I stayed for the next 10+ miles.

After the 24 switchbacks and at about the 3.0 mile mark, the hiker reaches a ridge that starts to take you away from the James River and the realization occurs - the Balcony Falls Trail has no views of Balcony Falls on the James River. What isn't clear is why, at about the 4.0 mile mark, there is a trail sign in the middle of the woods, away from any trail intersections or overlooks. Back home after the hike, after loading the data onto a topo map (Map), I determined that the sign is located where the trail originally ended, back before JRF became Virginia's first federally designated wilderness way back in 1975. Until that point, there was a fire road that ended here. Now, everything is overgrown, though it becomes obvious that the trail is on an old roadbed shortly after this point. But this means that the sign here is at least 40 years old.

I followed this road for the next 3.8 miles, crossing the Appalachian Trail, paralleling a different part of the A.T., then again crossing the A.T. just after meeting the Piney Ridge Trail. Along the way, I passed several nice vistas of the James River, a couple of thousand feet below the trail.

At the first A.T. intersection, a hiker has a choice. The Balcony Falls Trail ends, and the old fire road becomes the Sulphur Springs Trail (SST). You can take the SST to explore more of the JRF Wilderness, or you can take a right (south) on the A.T. hike a half mile to the Belfast Trail, and head back down to the car on the Gunter Ridge Trail.

I took the longer route, because I had never been on some of these trails before. But although it was about 3.75 miles longer than heading quickly back to the car, the entire 4.25 miles never deviated more than 250 feet in elevation. That seemed almost flat, after gaining 1850 feet over the previous 4 miles.  Even this route had a bug-out option, where I could have switched back to the A.T. at about the 6.7 mile mark - the two trails are only about 50 feet apart, coming together after skirting opposite sides of the high point known as the Hickory Stand.

At the 8.0 mile mark, and almost exactly 3 hours into my hike, I reached the Piney Ridge Trail. I hiked that trail earlier this year with a group from the Roanoke Appalachian Trail Club (link). Fifty feet away is the second intersection with the A.T. I headed north on the A.T. here, passing some really nice vistas and a busted up geocache that I cleaned up and packed out.  It took some time to find the geocache, so it was the better part of another hour before I reached the Belfast Trail at the 10 mile mark. I was on the Belfast Trail for less than 10 minutes before encountering the Gunter Ridge Trail after 0.4 more miles.

Soon it was time to drop in elevation.  Over about 2.75 miles, the Gunter Ridge Trail dropped 1450 feet at a 10% grade, utilizing 18 switchbacks before coming to the JRF Wilderness boundary. The trail then crossed Little Hellgate Creek and ended at the Glenwood Horse Trail.  From there, it was about two and a half miles of level hiking back to the car, following this orange blazed trail.

With one hitch.  The Glenwood Horse Trail kind of disappears at the parking area known as the Hellgate Creek Horse Trailhead. No trail. No blazes. So here is how you get through there. Take a left to the main road when the trail ends at the entrance to the parking area. Then take a right on the main road until you come to a fork and each prong has a USFS gate. Follow the left gated road and you are back on the trail. From the gate, it was about 0.7 miles northeast before coming to a prominent trail on the left. Though it is unmarked, it is obvious. That trail follows an intermittent stream and has views of several rock walls on the left. It leads to the access road to the Locher Tract.

Bottom line on this hike - It is a great workout, though it is not the first hike I would recommend in the JRF. Most hikers head towards the Devil's Marbleyard on the Belfast Trail or the highest point in the Wilderness - Highcock Knob, or hike the portion between the James River Foot Bridge and the Matt's Creek Shelter. If you have already done those and are looking for something different, this is a good loop to take. And between the Balcony Falls and Gunter Ridge Trails, the Gunter has more views. 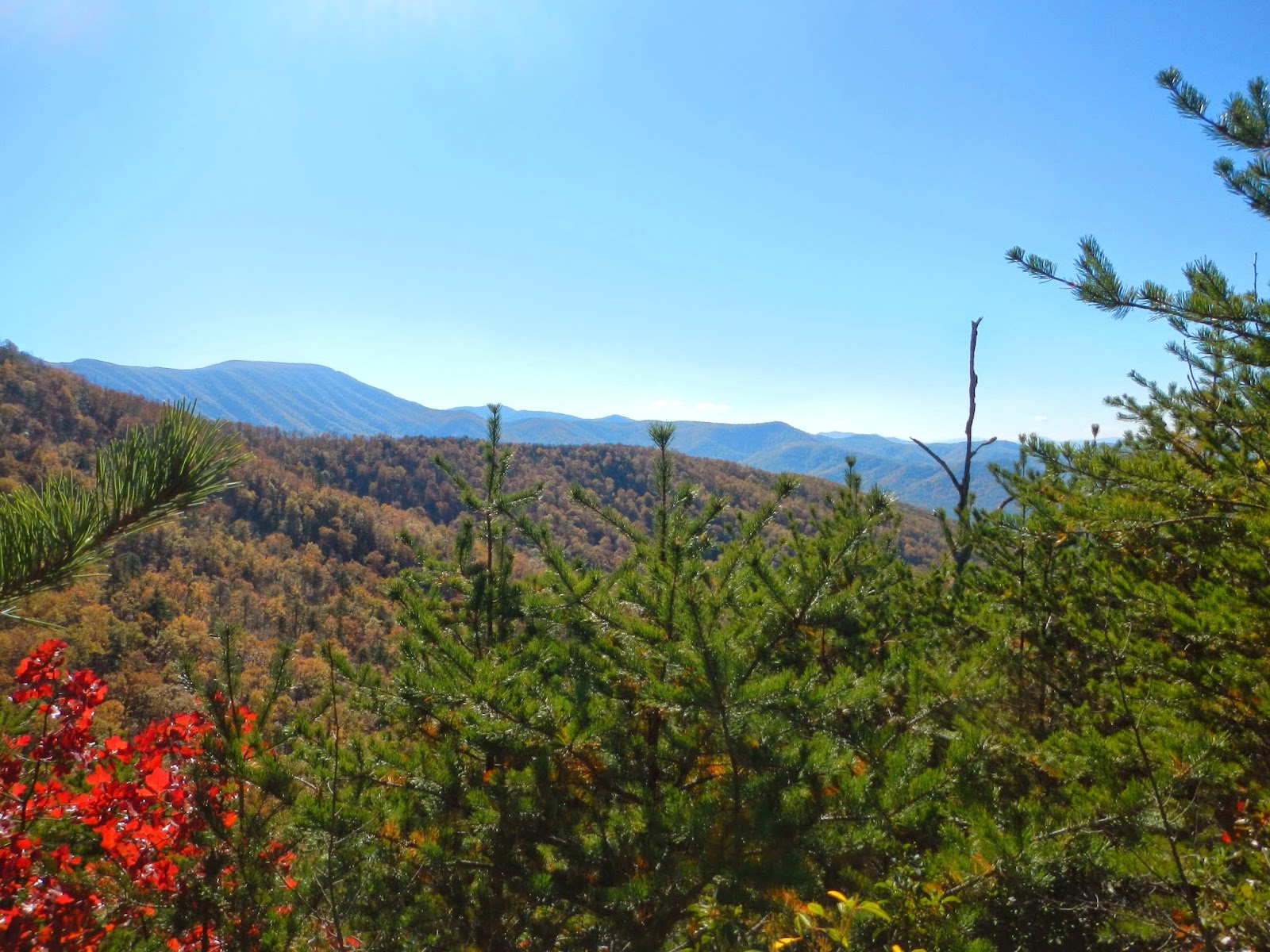