How many times through the years have I driven west on U.S. 250, past Staunton, past Churchville, heading to some hike or another in the Allegheneys, or maybe out to West Virginia or Monterrey?  Several dozen times at least I have made this drive, and every time I have passed the trailhead sign saying "Chimney Hollow Trail" on 250 just before turnoffs for Braley Pond and Deerfield and wondered what the trail looked like.
I can't think of another trail in the national forest that so obvious to the the driver.  Other trails are in the area, but you need to know where to go to find the trailhead; you need to know which intersecting dirt road contains a parking area.  The Chimney Hollow Trail (CHT) is right out there with a big brown sign for everybody driving 250 to see.  And it had always been in my trail queue, but somehow never made it to the top of the list.
About a month ago I took my 11 year old son part way up this trail for the first time, and since have been on it three more times.  I feel like I know the trail now.
My first trip, with my son and dog, went after a geocache part way up the mountain and just off the trail.  The geocache was left by a guy who claims he was back in these woods looking for Bigfoot, as there have been sightings.  I have never heard of such sightings!  We followed the trail through a beautiful ravine after crossing a bridge constructed as an Eagle Scout project by a member of a Churchville troop.   The hike through the ravine was beautiful, with large, healthy hemlocks and lots of white pine. There are several minor stream crossings for the first mile before the trail begins a steady ascent up the mountain.  We came upon the ridge holding the geocache, then continued up the mountain until we reached a ridge that ends at a place called Coalpit Knob.  The trail follows a ridge here, and there are nice views to the north to Hankey Mountain, which complement the views we saw before reaching this point, southwest to Shenandoah Mountain, Walker Mountain, and the Deerfield Valley.
It was at this point that my son decided he had climbed enough, so we headed back down the mountain.  I was holding on to secret hopes of circling around to another one of the Bigfoot caches, but my GPS indicated that it was still several miles off and the distance wasn't changing very quickly.  Walking along these trails, who knows how far the geocache really is.
I found out how far a couple of weeks later.  This other geocache had not been found in over 3.5 years, though the owner had checked on it early last year and found it present.  The previous finder had claimed that there was virtually no chance of it being taken by non-cachers, as it is in such a remote location.  The possibility of obtaining a find that had been unclaimed for so long proved irresistable, so on the last day of December I decided to make this my last find of the year, a find which would make that month my biggest month for geo-finds in my history.
The problem was that this cache was not easily accessible from U.S. 250, even though it was only a quarter mile from the road.  The highway is lined with private properties here, except for a couple of gated access roads that I wasn't about to block with my parked car. 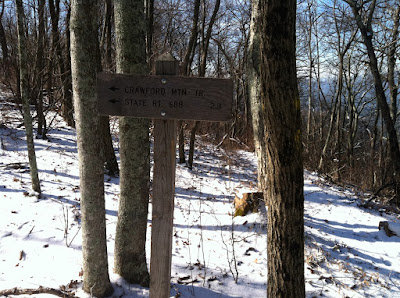 I finally decided the best access would be via the Chimney Hollow Trail.  One map (the latest edition of the National Geographic Trails Illustrated map #791 for Staunton, Shenandoah Mountain) even claimed that a dirt road intersected with the CHT that would take me to the cache area.  The same road shows up on the Garmin's Basecamp map.  I didn't remember a road, but I've missed bigger things when hiking, and the cache owner claimed the road existed in his description of his hide.
So I again drove the 60 miles out to the trailhead after using software to waypoint the location of the road intersection.  About a half mile up the trail, powerlines crossed the trail high overhead, but no road.  Since an older edition of the Trails Illustrated map indicated the road ended at the base of the transmission tower to the east, I bushwacked up to the next ridge to see if there was a road.  Here I found Forest Road 1761 at its western terminus.
FR 1761 turned into FR 1764, which wound around the transmission towers and eventually took me to the cache site after a long walk. After reaching the area, I noted right away that the previous cacher's comment that the cache "has virtually zero chance of being muggled" was wrong, as I found a makeshift hunting blind within 20 feet of the cache coordinates, along with several fresh looking Keystone Light beer cans, no doubt left by one of Augusta County’s finer citizens. I spent over 20 minutes looking around for this cache – I had come too far to give up easily on this find! But no luck. Bummer – it was a long walk back to the car!  I ended up spending five hours hiking over 14.7 miles and, though the views were nice, the return to the car was a little disappointing.

I returned again to the trailhead 10 days later, as the Southern Shenandoah Valley Chapter of the PATC was doing a midweek hike on the same trail.  They have been measuring all of the trails out in this area, in part to help provide content for a guidebook under development that would cover the nascent Great Eastern Trail. I had read about other mid-week hikes these folks had done, and they have a wheel they use to measure actual trail distances.  Since I was going to help lead a PATC-Charlottesville Chapter hike of the entire CHT that Saturday, I decided to tag along to see if I could learn anything about the route that I could tell the Saturday group.
Only three other hikers showed up - Jason and his father Richard, and old hiking friend Nancy - with whom I had hiked several times before.  It was a leisurely stroll to the top of the mountain.  We reached the end of the Chimney Hollow Trail in 2.5 hours, including 45 minutes of stopping time.  Though I would have preferred a faster pace, I felt this was a good indictor of the time the group on Saturday would require to get up the mountain.  On this day, Richard wanted to extend the hike, so we hiked to the Crawford Knob Trail and then east to Crawford Knob.  Through the trees on the way out to Crawford Knob we could see Elliot Knob to the north.  Elliot Knob is the highest point in the George Washington National Forest and has several transmission towers on top. 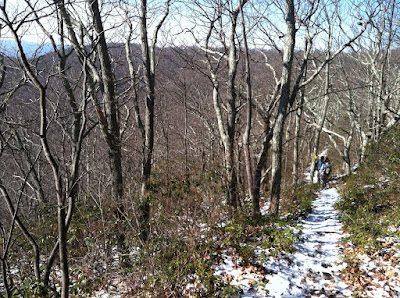 Nancy and I discussed the hike I was leading on Saturday, and we agreed that if she was in town Saturday she would take the Crawford Knob Trail from its trailhead and meet our group on the top of the mountain.  We might consider turning Saturday's out and back hike into a shuttle hike.
What we also discovered is that there isn't any great (or even good) place to sit for lunch.  This is a critical feature for group hikes!  There aren't any spots where you can sit and enjoy a view, and where we did stop was cold even though it was protected and temperatures that day were supposed to reach the 50s.
On Saturday, we collected at 9AM in sub-freezing weather expecting to find maybe 5 or 6 hearty souls up for a cold hike.  Instead, there were 16 of us at the high school meetup spot.  I was amazed!  Iva, who was leading the hike with me (and has been pushing me to quit talking so much about great hikes and start leading a few), had brought a few folks from her Outdoor Social Club because she cheats and gets dual credit for leading one hike.  And Dan had brought one of his daughters, who is preparing for a marathon.  But there were still a ton of other folks joining us!
Also on the list was Nancy, due to meet us at the top of the mountain, and Bryce, who is one of the guys behind the website hikingupward.com.  I had emailed Bryce in the past about coordinates to a local plane crash, and absolutely love his website.  Bryce had asked about hikes out near Harrisonburg that would be new ones for him, and I was excited to have him join us and give me someone new to talk trails with. 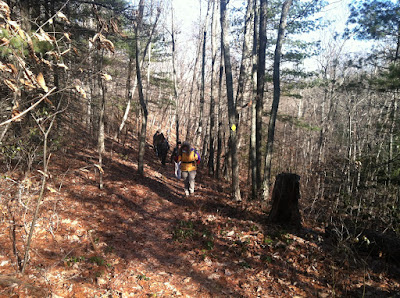 We stopped in Churchville so some folks could get provisions, then pulled into the parking lot at the exact time I told Bryce to meet us: 10:30.  After some quick introductions, we hit the trail.  I had been assigned lead and quickly found that the stream crossings that had been pretty minor the previous three times I was on the trail were more of a challenge on this day, thanks to rain thoughout the day on Thursday.
About a mile into the hike, though, the trail leaves the ravine and starts up the mountain slope at an amazingly consistent rate of 16%.  We topped one ridge, walked along it, then traversed the western slope of the mountain until we reached Coalpit Knob and another ridge.  After leveling out for a while, we were back to the 16% grade until we reached the top of the mountain and the end of the trail.  The trail's consistent climb had to be by design, and the trail was very nicely built.
It was well maintained, also.  There were very few blowdowns and there was evidence that some folks had taken saws to several large trees that once blocked the trail.  I wouldn't be surprised if it was a mountain biking group, as a Google search of "Crawford Mountain Virginia" turns up multiple tales of folks screaming down this trail on two wheels.   We were fortunate not to run into any of that (or, more importantly, have any of that run into us!)
At the top of the mountain we all settled in for lunch.  Bryce bid us farewell as he had to be back at JMU for his daughter's music performance, and not 5 minutes later we saw Nancy coming up the trail from the opposite side of the mountain.  We decided to go back the way we came rather than using Nancy's car for a shuttle, and headed back down the mountain with Nancy after promising her we would give her a lift back to her car.  Bryce later put several very nice photos of the hike on Hiking Upward's Facebook page for all to see.

This hike started out at an elevation of 1945 feet at the parking lot and rose to 3855 feet at our lunch spot. It lasted a hair over 4 hours including about an hour for stops, and was 7.5 miles long.
So after more than 15 years of driving past this trailhead, I finally stopped and checked out the trail - 4 times in a month.  It is time to find a new trail.