After days of rain and reported snow in the mountains, I took off with a couple of friends and the dog for Graves Mill in Madison County to hike portion of Shenandoah National Park's Central District directly south of Old Rag and near Hoover's Rapidan Camp.  The Skyline Drive was closed due to the weather, and I wanted to investigate a trail I remember seeing off of the Jones Mountain Trail a few years back that is not on the PATC's map of the area.

The hike started at 10:23 AM along the Rapidan River, which was roaring from all the recent rain.  After a half mile, we cut west on the Staunton River Trail.  The SRT is probably most used to take overnighters up to the PATC's Jones Mountain Cabin.  I endured a frigid overnight in this cabin almost exactly two years earlier, recounted here.  About 2.5 miles after it starts, the Jones Mountain Trail splits off towards the cabin.  That was the route we took up the mountain, reaching the cabin just before noon.

The two women I was hiking with both plan to hike the Pacific Crest Trail in the Spring, so our climb on this day was not an issue for them.  However, neither had seen the cabin, so we made a side trip to let them get the experience.  We spent about 10 minutes wandering around and taking a couple of photos.  From the cabin, we climbed steeply for about 20 minutes from the cabin turnoff to Bear Church Rock, where we had lunch and enjoyed the view.  We spent a leisurely twenty minutes at the rock before heading further up the trail.

The Jones Mountain Trail continues heading east, eventually linking up with other trails that go all the way to the A.T. and Skyline Drive.  We weren't taking the JMT all that way, but were instead searching for a trail in the Rapidan Wildlife Management Area.  We found it after hiking for a little over an hour from Bear Church Rock, arriving at 2:00 PM.  We followed the trail about a quarter mile southeast, far enough to get an idea of its general direction, though I didn't get enough information on the trial to be able to add it to the next map. 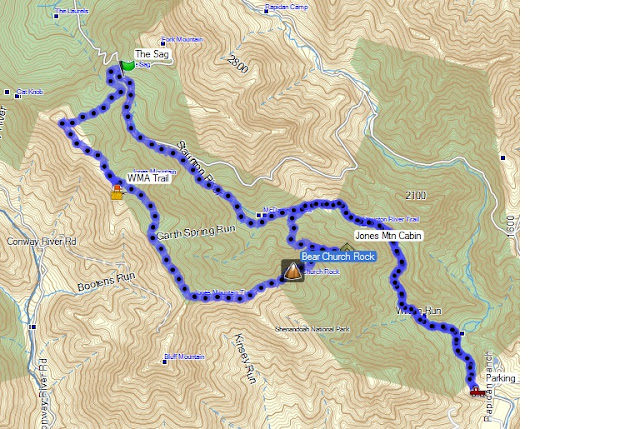 At this point, we had a decision to make.  We had been on the trail for over 3.5 hours, and had hiked a distance I later calculated to be 7.1 miles.  We had about 3 hours of daylight left.  Looking at the map, it appeared that continuing east then looping down the mountain to the north would be the quickest way back.  But we were taking a chance, as we could see that the trail we would be taking crosses the Staunton River twice.  We had to hope that we were far enough upstream that crossing would be possible.

So we headed west towards a trail that was identified as the Gap Trail on my GPS, but was really the Jones Mountain Trail again.  At Cat Knob, the JMT turns into the Cat Knob Trail, while the JMT itself takes a hard right turn and heads down the mountain.  (The JMT for us started heading southeast, then changed to northeast, then changed to southwest, then changed to northwest, then ended going pretty much due north.  It is almost as if the SNP trail naming folks ran out of extra names, and just named everything in the area the JMT.  Kind of like Rugby Road in Charlottesville.)  We reached this right turn at 2:35 PM.  This was the high point of our hike - the rest of the trip would be a steady downhill.

The downhill started out steep, and it was in the snow.  We completed the JMT about 20 minutes later, having descended for a mile.  At the end of the JMT we were surprised to find a government truck (with a major winch on the front), and a road that had seen several vehicles since the previous night's snow.  The road heads up to a transmission tower, but it is literally in the middle of the National Park, so it is jarring to see vehicles where we expected trails.  This area is identified on the map as "The Sag," but it does not appear different than any other part of our hike, so a special name seems a little strange.

We had to follow the road for about 7/10 of a mile before reaching one of the ends of the same Staunton River Trail we took at the beginning of the hike.  We took the SRT and travelled through some 4 inch deep snow along a strongly flowing stream.  Clearly, no one had been on this trail that day.  The snow was untouched.

We travelled slowly through this part of the hike, as the snow covered holes and slick rocks, and we had to cross the Staunton River a couple of times.  We made the crossings unscathed, but it took a while to find the right spot to cross.  Even the dog was nervous about this crossing!  We reached the point where we had turned off to the Jones Mountain Cabin that morning at 4:06 PM, approximately 4.5 hours after we had last been there.  And it took us about an hour from here to get back to the car.  We found a nearby geocache left by prolific geocacher Team.Hepler near the lot, then headed back to town.