I forgot my camera on this hike, so no photos this time!

In trying to get in shape for a strenuous hike in California this summer, I've continued my search for the hardest hikes in Virginia.  On a cool and drizzly Tuesday morning I headed out to the Three Ridges Wilderness, which is near Crabtree Falls and Wintergreen Ski Area in Nelson County.

Most descriptions of this hike start out from a parking area on the Blue Ridge Parkway at Reed's Gap where the road to Wintergreen reaches the ridgeline. (Here is an example.) I chose a harder route, from the point where the Appalachian Trail crosses Route 56 along the Tye River.  This trailhead is at 950 feet in elevation, and the AT climbs to 3,955 feet inside the wilderness.

Parking at the lot on Route 56 is always a little nerve-wracking.  I've heard tales of folks who parked there for an overnight backpacking trip only to come back the next day to find their car battery gone.  When the sheriff gets called, he tells you, "You are in luck, because a guy just up the road sells used car batteries!"  Then you get the privilege of buying back your own battery.  A sign at the lot says that break-ins have occurred and instructs you to take all valuables with you.  But a car battery is pretty heavy to haul up a mountain!  I'd never park there overnight, but will take the chance on a day hike.

I intentionally picked a cloudy day with a threat of rain through mid-afternoon.  This worked out well as I was able to hike the uphill portion of the route without too much discomfort from the heat.  The trail works steadily upward from the great suspension bridge over the Tye River to its first meeting with the Mau-Har Trail after 1.7 miles.  At 2.6 miles on the A.T. is the Harper's Creek Shelter.  Since I had last been through here the Tidewater Appalachian Trail Club has done much work upgrading the area around Harper's Creek Shelter.  I do not remember the several campsites or the signs in the area, though the additions made it more confusing to follow the A.T.  Otherwise, the area looks very nice.

After passing the Harper's Creek Shelter it is a steady climb to the top of Three Ridges.  I had remembered this to be a brutal hike, and expressed my belief to other hikers through the years that Three Ridges is really a tougher climb than The Priest.  The Priest is widely talked about as the toughest hike on the A.T. in Virginia.  The Three Ridges climb, however, is only 100 feet less.  Now that I have looked over GPS data for each ascent, though, I can see that the A.T. climbs The Priest in 4.0 miles, compared with 5.3 miles  for Three Ridges. 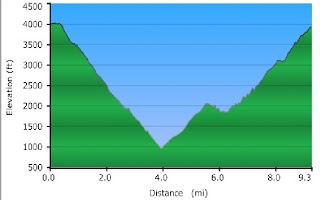 That is one reason why GPS data is such a great resource.  I got data off of Wikiloc.com giving GPS data for the A.T. to both peaks.  The Vertical Profile is shown to the right, with The Priest on the left and Three Ridges on the right.  Even though I remember Three Ridges to be a tougher hike, it is clear that The Priest is steeper with a much more unrelenting ascent.  I don't even need to hike the Priest before having data that can be used to compare the difficulty of this hike compared with other hikes.

From an "experience" standpoint, I was surprised that the ascent of Three Ridges was not tougher.  I remember it being brutal, but it didn't seem too bad when I ascended this time.  The ascent never left me out of breath, though the entire hike was long and left my legs pretty sore.  After reaching the top the trail leveled out before coming to the Maupin Field Shelter and the northern terminus of the Mau-Har Trail.  There weren't any real views at the top because I was hiking in the clouds, but there are beautiful vistas when it is clear out.

I stopped at the Maupin Field Shelter and had lunch.  A couple was setting up a tent in one of the nearby campsites, and a couple of backpackers showed up a little confused about where the Mau-Har Trail was and where the A.T. was.  When one of them pulled out a cigarette, I took off down the Mau-Har.

I had never done the complete loop before, thinking I was not in shape for the long trip required to complete this.  The northern section of the Mau-Har Trail was the section I had not completed.   The trail was constructed back in the 1970s as a connector to two parts of the A.T. and so folks could see several small waterfalls on Campbell Creek.  The trail is still pretty rough in sections, but it is clear that the AT Club maintaining this trail has worked hard on it.  It is steeper than the A.T. because of the way it follows the creek.

After several creek crossings, the Mau-Har climbs steeply out from the Campbell Creek valley, over a ridge, and connects again with the A.T.  From here it is 1.7 downhill miles to the trailhead and parking lot.  This was the toughest hike yet, as reflected in the PATC Difficulty Factor, listed below.   That number is calculated by multiplying elevation twice, then multiplying that sum by the distance, then taking the square root of the resulting sum.  This hike has the highest number yet.