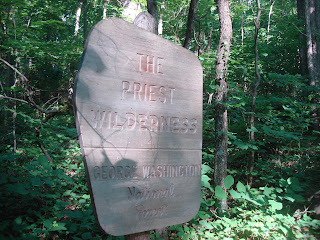 In earlier posts I have written about preparing to hike Half Dome in Yosemite later this year. I've bought a book that is about only this hike. I've hiked progressively tougher trails.  Two months are left, and I am running out of options in Virginia that provide a greater challenge than my previous hikes.  I asked the experts on the PATC Trails Forum for ideas of hikes that approximate the Half Dome Hike.  None of the suggestions seemed better than the one I had come up with: hike from the Tye River to the top of The Priest on the Appalachian Trail.  Twice.

This hike took me back to the same parking lot where I started my Three Ridges hike a couple of weeks previous, on Virginia Route 56 a couple of miles east of Crabtree Falls.  The lot is on the A.T. where it meets the Tye River, at an elevation of about 950 feet.  From there, the A.T. southbound climbs for about 3.5 miles to the top of The Priest, which is just over 4000 feet.  Climbing it twice would give me a 6000 foot gain over about 14 miles, which is actually steeper than the Half Dome hike.  A day hike to the top of Half Dome is 14.2 miles long (via the Mist Trail) and requires an elevation gain of 4800 feet, according to this site. 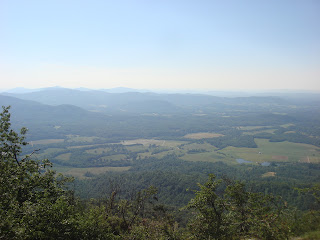 The 14 miles up and back from Half Dome are no doubt much more spectacular than my trip up and down and up and down The Priest.  But there are a couple of nice overlooks along the way up The Priest, and I had the privilege of speaking with 4 northbound thru hikers each individually on their way to Maine.  One told me that a bear had been grunting around her tent the night before, and she was afraid it would come in and get all the food at her feet (she should check out this video!).  Another asked me what I was hiking today and when I told him he responded, "What would you ever want to do that for?"

A big thrill was getting to see my first ever examples of a small plant known as Beartongue or Eastern Turkeybeard, Xerophyllum asphodeloides.  Can I say it was a thrill to see a plant?  I've seen photos of Beartongue (I like that name much better than "Turkeybeard," though the latter is used more commonly), and it reminded me a lot of its close relative, Beargrass, which is a plant I saw near Glacier National Park back in high school.  Each plant had striking white groups of flowers that seemed to glow like lightbulbs.  The genus name, from the Greek xeros (dry) and phyllon (leaf), refers to the dry, wiry, basal leaves of this showy plant. It is said to be difficult to cultivate and seldom blooms in gardens.


One source states that Eastern Turkeybeard is "only found in the pine barrens of , , and mid- to high-elevation (2000-3000 feet) quartzite or granite ridges with xeric [dry] oak-pine glades along the Appalachian mountains of , the Carolinas, , , , and ."  I found it higher on The Priest, with one plant at 3100 feet, and the rest between 3900 and 4000 feet in elevation.  Another source reports that the plant is reported in only 41 counties across its range, though a Virginia Tech site claims that it is found in 23 counties of Virginia alone. 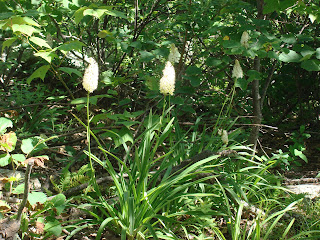 This plant is a mini version of its western cousin.  I was surprised at how small it is.  And interestingly, it only seemed to grow within 3 feet of the trail; I could not find it deeper into the woods.   One source states that the plant "may be aided in its establishment by fire, as it appears to be most common in areas that have a history of burning and increases flowering following controlled burns."  From the same source: "The strikingly tall inflorescence of this species produces white, nectar-producing flowers, making it unique among the flora typical of this dry habitat. The flowers may attract moths and other flying pollinators; however, no literature has been published to date on pollination."
The plant appears to be threatened in the central appalachians, as shown on this site.  Another source lists the following threats to the plant:
• Trampling and collection by hikers
• Damage by off-road vehicles
• Possible collecting (the species is advertised on the internet as a homeopathic remedy)
• Erosion of shallow-to-bedrock soils due to water diversion or road-building
• Conversion of habitat for residential development (especially pine barrens)
• Fire suppression leading to succession of woody canopy 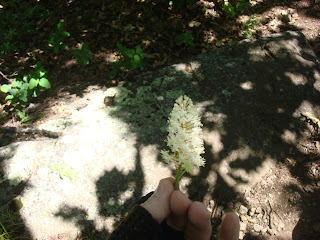 To that list they can add "well meaning but ineffective landscapers," as I tried to do my part to help a set of plants by clearing out some dead branches that were competing with some of the plants.   This backfired, as I managed to sheer off one of the flower heads in the process.  I took a photo of that flower in my hand, so you can get a sense of the flower's size.
As for the hike, I did manage to climb The Priest twice.  The second ascent felt like it was three times harder than the first one.  At one point, I turned my GPS off and back on - I was convinced it must have locked up because it had read that I'd hiked 10 miles for so long.  I doubt that I will ever take another day hike that is quite this hard, though I ended the day certainly feeling better than after other hikes I"ve taken - most notably climbing Katahdin via the Knife Edge Trail in Maine.  Nothing beat me up like that hike.  Maybe it is time to go back, since I am in better shape!