I took a small group of hikers out to the GWNF North River District on August 15th, and we were surprised by the amount of flooding out this way.  It had been generally wet for several days, but we did not expect the levels of water we experienced - the 3rd or 4th highest water levels at any point in the past two years.  You can see from the chart below that the water levels were very high compared to normal. 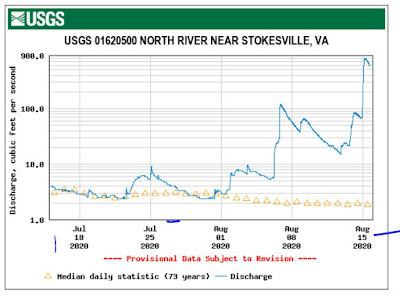 If we would do any hiking, it would have to be a high trail, so we parked at the Braley Pond Road parking lot for the Wild Oak Trail and headed uphill to the Dowell's Draft Trail, east of the road.  This turned out to be a great hike, as we took the old (pre-mountain bike) version of the trail on the way back.

Over 5 miles, we ended up hiking only about 25 feet of trail twice.  And the old trail alignment, even though superseded 4-5 years ago, was still in really nice shape.  The lack of use meant it was soft with pine needles.  And we didn't have to worry about mountain bikers screaming down the trail at us.  We shouldn't have had to worry about that anyway, given the wet trail conditions, but we still came across one biker who apparently doesn't care about tearing up muddy trails.


Below is a map I constructed showing the old and new alignments of the Wild Oak Trail.  When combined with the Dowell's Draft trail and the Betsy Trail, it creates a loop hike about 5 miles long that has only 25 feet of common trail over its entire distance. 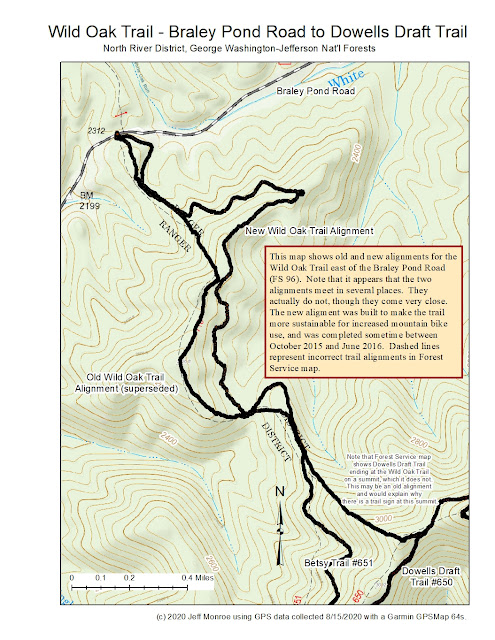 The exact route we took was the new WOT alignment to the intersection with the Betsy Trail, then we stayed on the WOT until we intersected with the Dowell's Draft Trail - just after an intermediate summit on Hankey Mountain, then we took the Dowell's Draft Trail to its intersection with the Betsy Trail.  We took the Betsy Trail back to the Wild Oak Trail and turned back towards the parking lot.  Just after this intersection, the old WOT alignment cuts left and we took that.  I always thought that the old and new alignments combined again (or at least intersected), but they never do connect.  The old alignment is a little tougher than the newer section.  You can see this below by comparing the first two miles with the last two miles of the elevation profile.  At the beginning is the new alignment.  At the end is the old alignment.  In between is a heart popping climb! 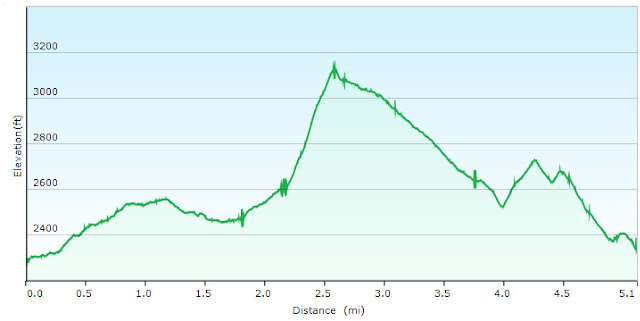