The Wallace Tract Trail is not one that I've rushed to hike.  It is remote and does not offer a big workout.  But I'm trying to hike every trail in the North River Ranger District, so I checked this one out in April after hiking another, nearby trail.  I'm here to tell you that, unless you are also looking to check off every trail in the district, don't bother with this one.

The Wallace Tract Trail connects Sugartree Road on the western slope of Shenandoah Mountain with the Cowpasture River south of Williamsville, off of Indian Draft Road. (Map.) I had the trail's supposed route loaded into my GPS receiver when I hiked this.  There is no way I could have followed the trail without it.

I started from the western end, at a parking area at the end of FR 282, south of Williamsville. 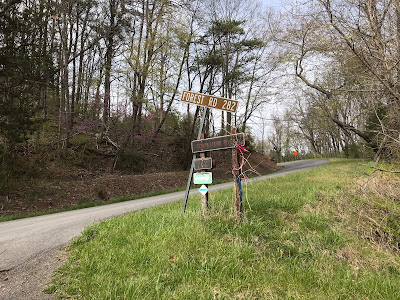 I passed a couple of roadside campsites, both surprisingly occupied (one looking like a long term stay), before coming to a parking area and a closed gate. 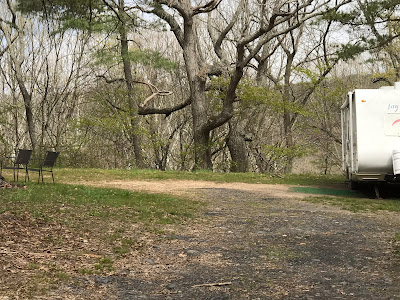 Mile 0.0 -  Start the hike by passing a closed gate.  You drop down to a field along the woods road.  Stay to the left and look for the suspension bridge over the Cowpasture River. 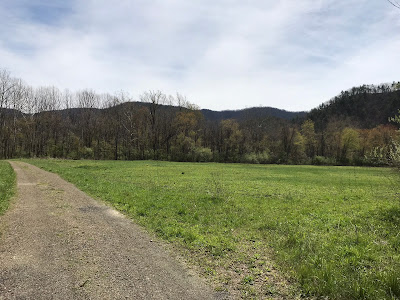 Mile 0.2 - Cross the suspension bridge.  As of this writing, that bridge is a little scary!  There was a gap in the footing that had been repaired in a very sketchy manner.  The bridge listed to the right as I crossed. 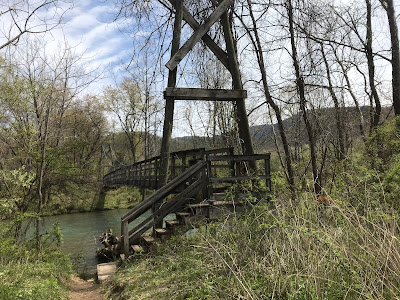 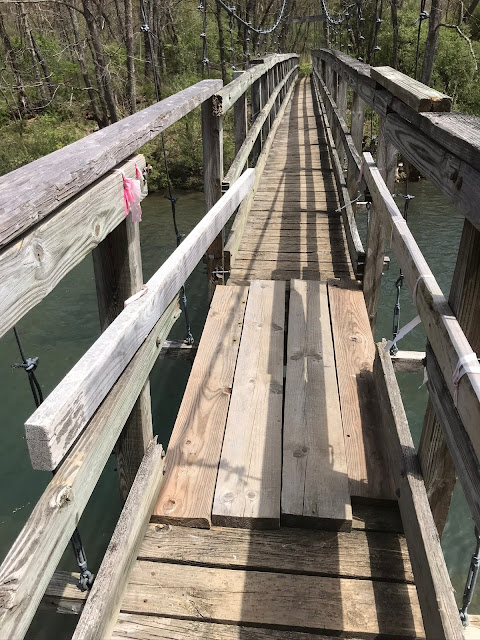 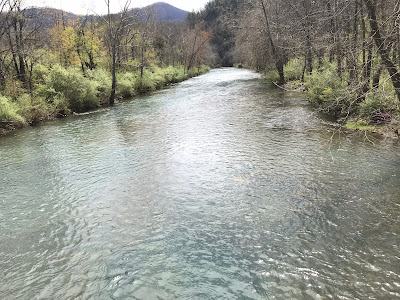 After the bridge, turn left and follow the yellow blazes along the trail, passing a field with a hundred or so plastic tubes protecting sapling plantings. 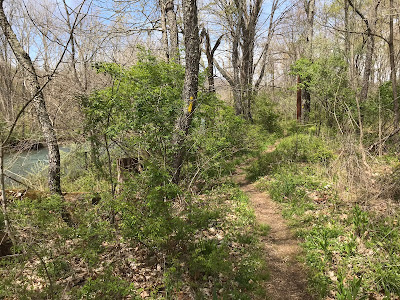 Mile 0.5 - The trail leaves the river in a place that wasn't very evident - my GPS route helped a lot.  It then cut across a series of fields that, judging by the growth of some of the trees, had been fields for a long time.  There were no blazes, and there was no bare line of dirt - likely because the trail gets so little use. I had to keep referring to my GPS receiver to stay on track. 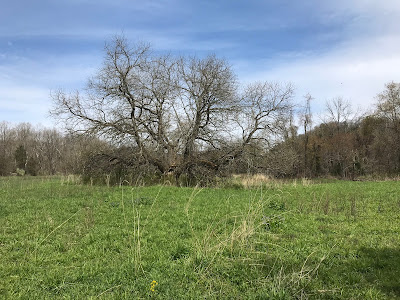 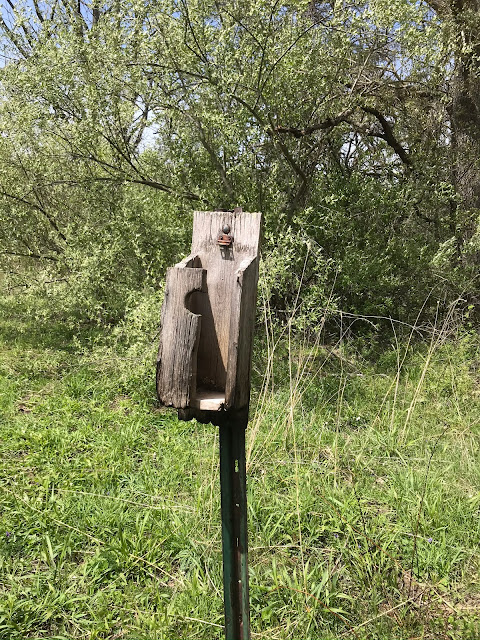 Mile 1.0 - With the help of my GPS track, I eventually came to a road that started up towards Shenandoah Mountain.  The road was blazed yellow at regular intervals.  Looking to the right, it was evident that I could have walked straight through the field to get here, as I could see all of the sapling tubes at the other end of the field.  I returned straight from this point at the end of my hike.  Look carefully at the photo below for the white tubes. 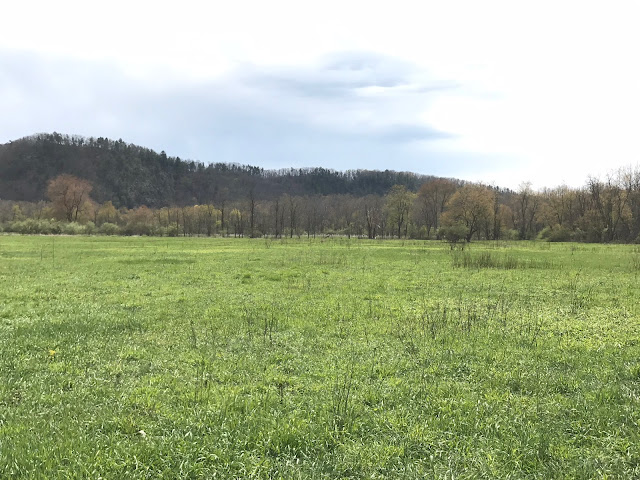 Mile 1.3 - Pass an old road that comes up from the right. The trail actually goes left here, but it is impossible to tell as there is no marking or visible trail.  I came back this way and will describe it later, but continued up the road at this point.

Mile 1.6 - I had realized as I climbed that my route had separated from the trail track on my GPS. There were no yellow blazes.  The road curved back to the track, where I found evidence of an old road crossing.  I took the old road uphill, as shown in the photo below. 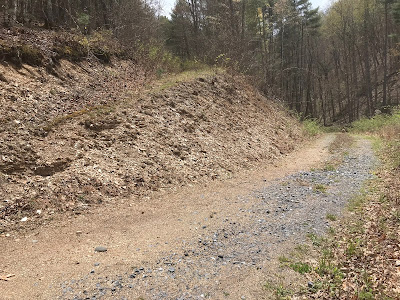 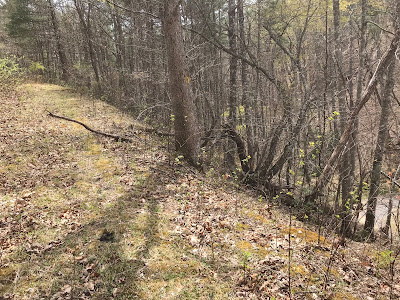 The trail itself, as shown in the photo above, was in nice shape.

Mile 1.7 - But it quickly merged back into the main road, making it really not worth pursuing.  The GPS track followed the road for the rest of the way, making me think that the trail has always been the road but that the road itself had been upgraded at some point in the past.  The yellow blazes continued along the road and there were occasional winter views back into the valley. 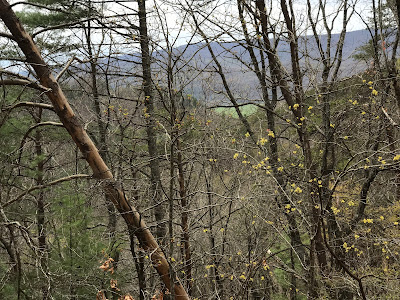 Mile 2.8 - The trail ends at a closed gate a couple hundred feet west of Sugartree Road.  Next to the gate is a metal trail sign. 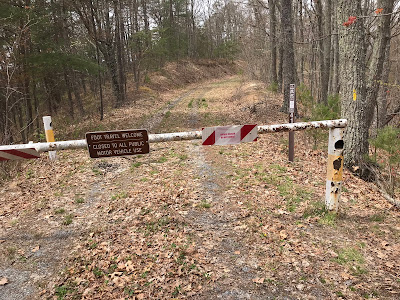 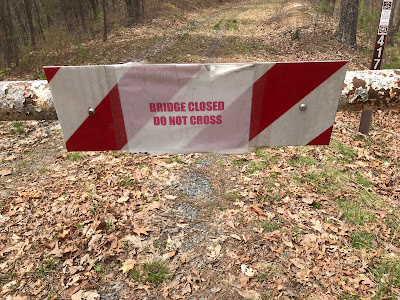 This is what the Forest Service has apparently come to.  Instead of fixing the bridge, just put up a sign saying it was closed!  And, when I returned to the bridge, there was evidence of pink tape blocking the bridge at one point.  I'm guessing a citizen "jury rigged" the bridge to make it passable (not necessarily safe), and pulled the tape.

I turned around here, and further down went off the road to follow the original trail route, which was blazed and crossed a couple of streams deep in the woods. 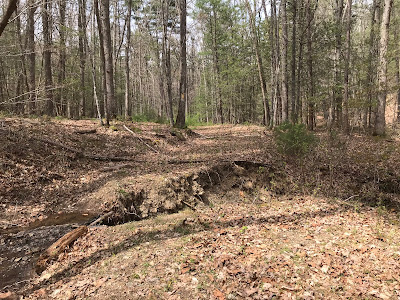 It was actually very pretty down here, but the trail then climbed out through a treeless area that was covered with thorny raspberry vines.  No fun!  If you ever go here, stay on the road.  I'm guessing that the Forest Service, if they ever even think about this trail (a big stretch...) figure hikers would simply take the woods road.  Looking back from the road at the point where the trail splits off, there is absolutely no way to tell that a trail goes left off of the road, as seen in the photo below.  The trail's route goes right through the center of this photo. 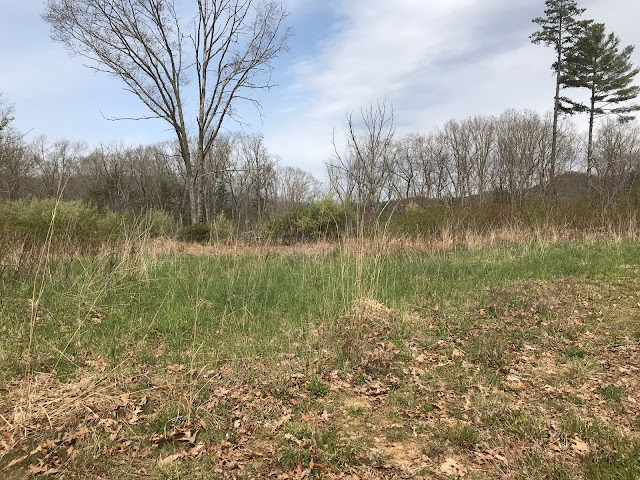 Mile 4.6 - I reached the bottomlands again after descending on the road.  At this point, I cut left and headed straight for the line of sapling tubes I could see from about a half mile away.  Cutting straight through the field proved no more difficult than the supposed trail I followed on the way out, and I noticed an old home in the woods that I hadn't seen on the way out.  The views from the fields were actually very pretty. 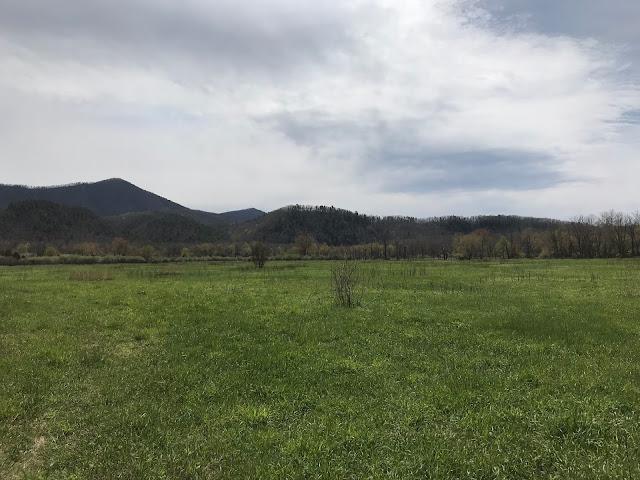 Update: I questioned on this hike whether the trail follows the road on its eastern portions.  I have been playing with CalTopo and overlaid my GPS track on the USFS map. Shown below, the GPS track in black does not track the current trail, but the road does. 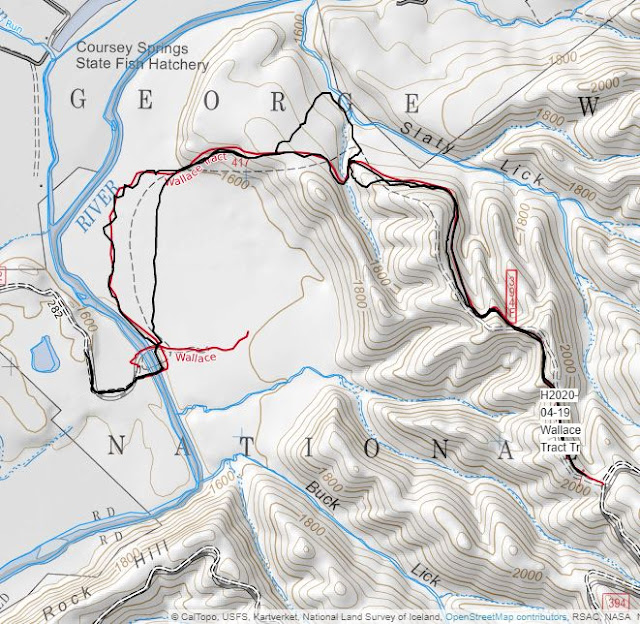